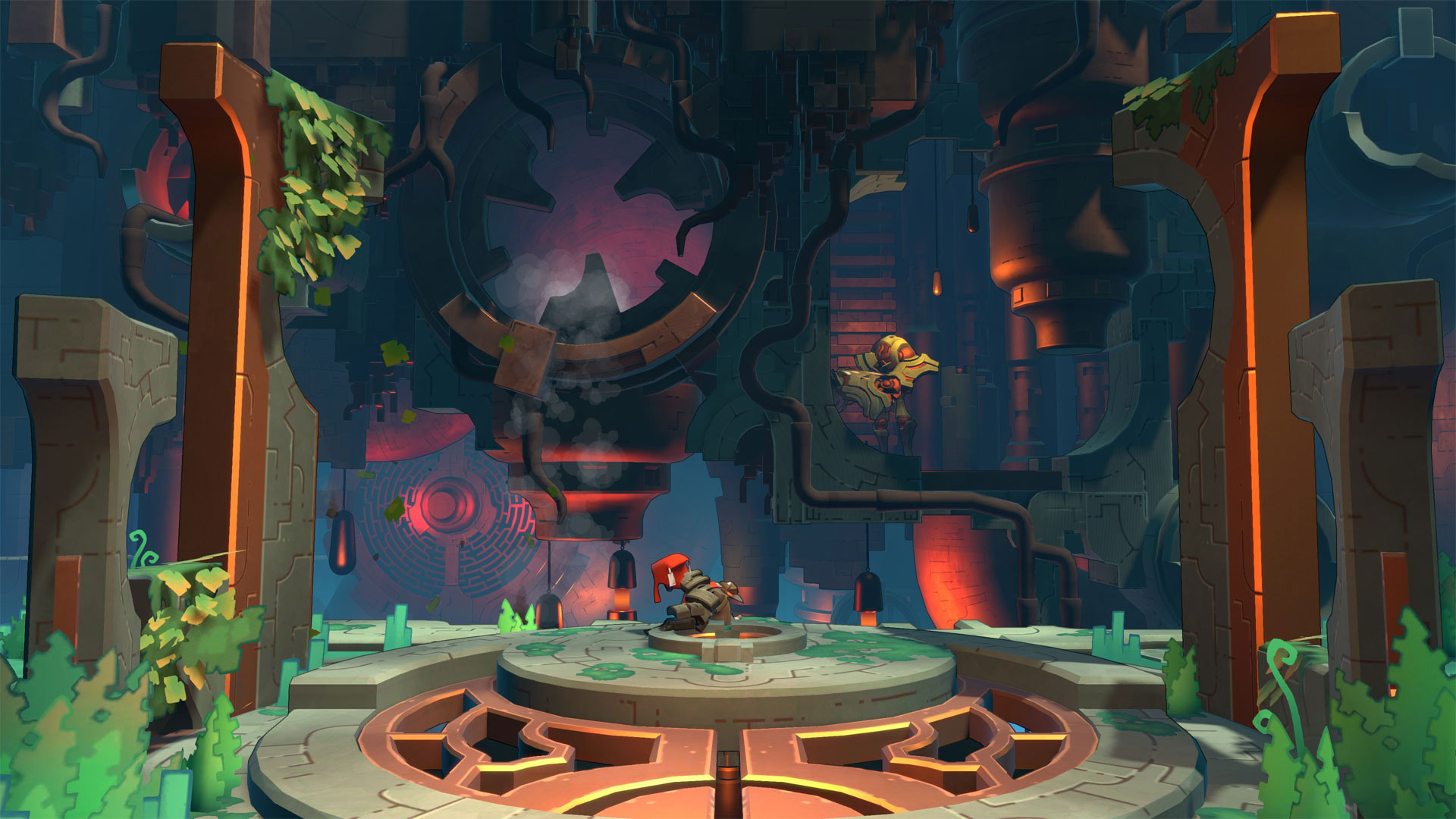 Made by Runic Games, the team responsible for the Torchlight series, Hob clearly represents a shift in terms of game genre for the team, and that shows, even though the game is really surprising for the most part.

At it’s core, Hob is an action adventure game that takes place in a overworld where you’ll be progressing through different areas throughout the game, exploring dungeons and other optional areas. With that said, the game has a certain metroidvania feel to it, especially when you realize that you’ll be acquiring new abilities that allow you to access previously inaccessible areas. On that note, navigating the world by using the map might feel overwhelming at times, mostly because there’s no way to keep track of, or mark on the map, the previous things and areas that you couldn’t interact with. This results in you going around from one place to another trying to find that one spot you remember seeing something that you now know how to interact with. Much in the same way, the game doesn’t always have a clear objective for you, sometimes it marks certain spots in the map that you need to go, but, most often than not, you just have to backtrack or figure out what you need to do on your own.

The game’s focus can’t really be assigned to only one gameplay element, as Hob features platforming, combat and exploration pretty much in the same amount, as well as some puzzle solving which aren’t really the best the game has to offer. Combat works in hack and slash fashion, with the ability to lock on to enemies and to roll in order to dodge their attacks. The combat doesn’t really have much depth to it, it’s just fine, but I don’t mean it as a complaint. Given that it’s not the game’s strongest feature, it makes that combat encounters with the various different types of enemies come to an end rather quickly, which allows you to get back to exploring. 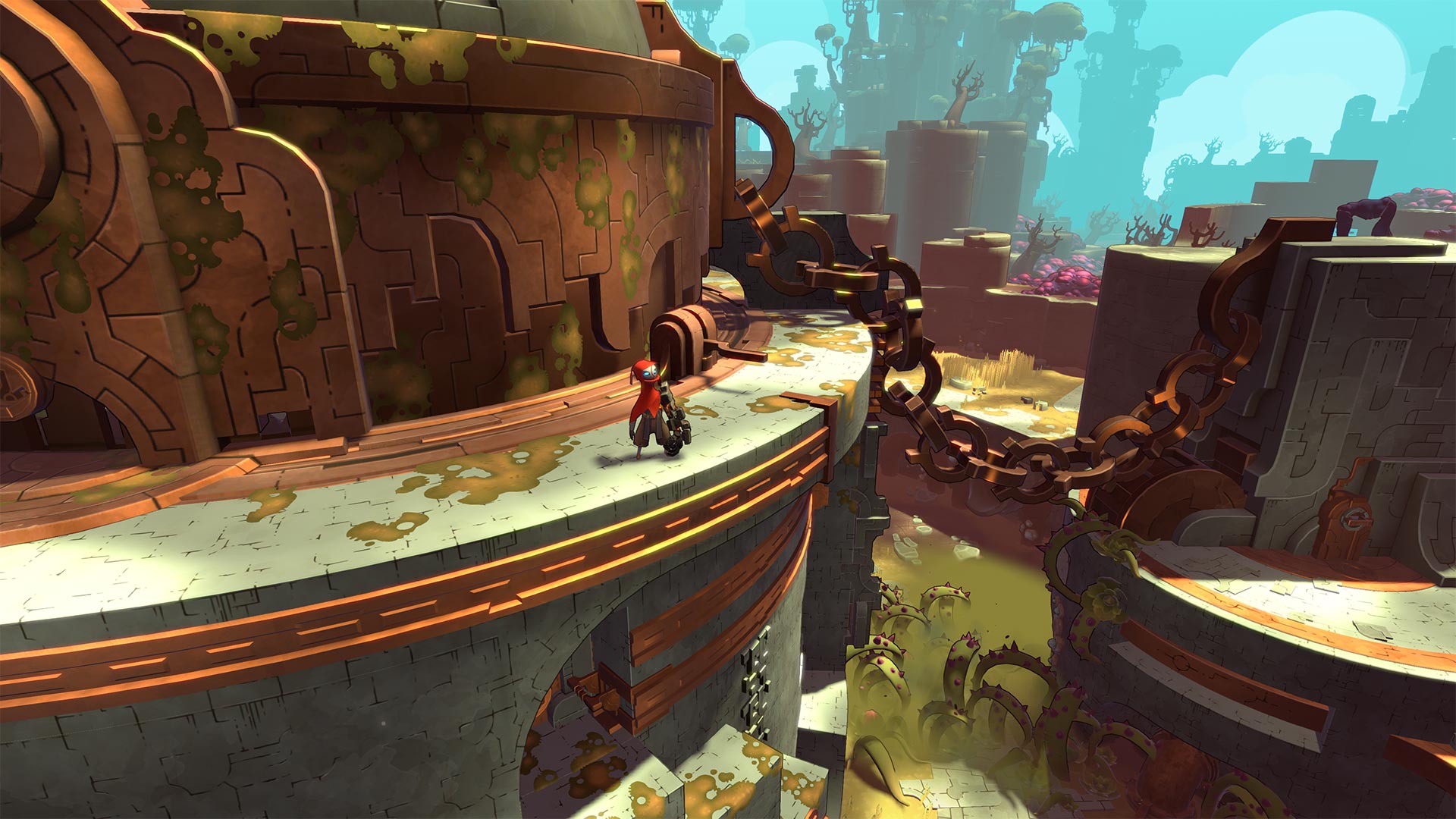 The game handles perfectly fine with either keyboard and mouse, or with a controller. The controls are very responsive and fluid, but for the type of game it is, most people will probably find it much more enjoyable to play on a controller, just because the way your character perfectly responds to the thumbstick movement. In the same way, the camera dynamically adapts to your position and to different areas in the world, which makes it so that you never get caught in a weird angle where you can’t see what’s happening, or that you never miss something important.

Exploration and platforming are the two main things that will keep you going throughout your journey through the world of Hob. There are a lot of optional areas that the player can explore, as well as plenty of collectibles to gather. These collectibles are not meaningless, as in, just in the game for the sake of collecting, as they are split into different types that can either, increase your maximum health or energy, improve your sword, or be used as currency to purchase new skills that you can use during combat, or different cloaks that you can wear. Each of these cloaks has their ups and downs, like one that makes you move faster but reduces your health and energy. While the game doesn’t particularly hold your hand at first, it certainly directs you in a certain way in which you’re free to go right ahead or after exploring some of your surroundings. Soon enough, once you’ve unlocked all the main abilities that will allow you to navigate the entire overworld, you’re free to go where you please, as there are plenty of secrets to discover, and the game rewards exploration quite nicely in the form of upgrades and even in the form of light story elements.

Now, the game’s story is somewhat ambiguous, mostly because the game has no dialogue, at least none that you can understand. The game starts off with you emerging from what looks like a tomb, and in the first few minutes of the game you realize that the world around is corrupted in some way, and that there are remnants of some sort of civilization scattered across the landscape. It seems that you were awaken from your slumber by this fellow robot, and he seems to be the only being that can help you. He talks to you in some incomprehensible language, while pointing at things, which is usually him giving you indications of what to do next, or him trying to explain something to you. This makes the world much more mysterious than if the robot was talking in any actual language. As for the rest, it’s up to the player to connect the dots and come to their own conclusions by looking around at the environment and the scenery for clues as to what’s going on in the world, where did all the corruption come from, who are these robots, who placed these pieces of technology there, who is friend and who is foe? 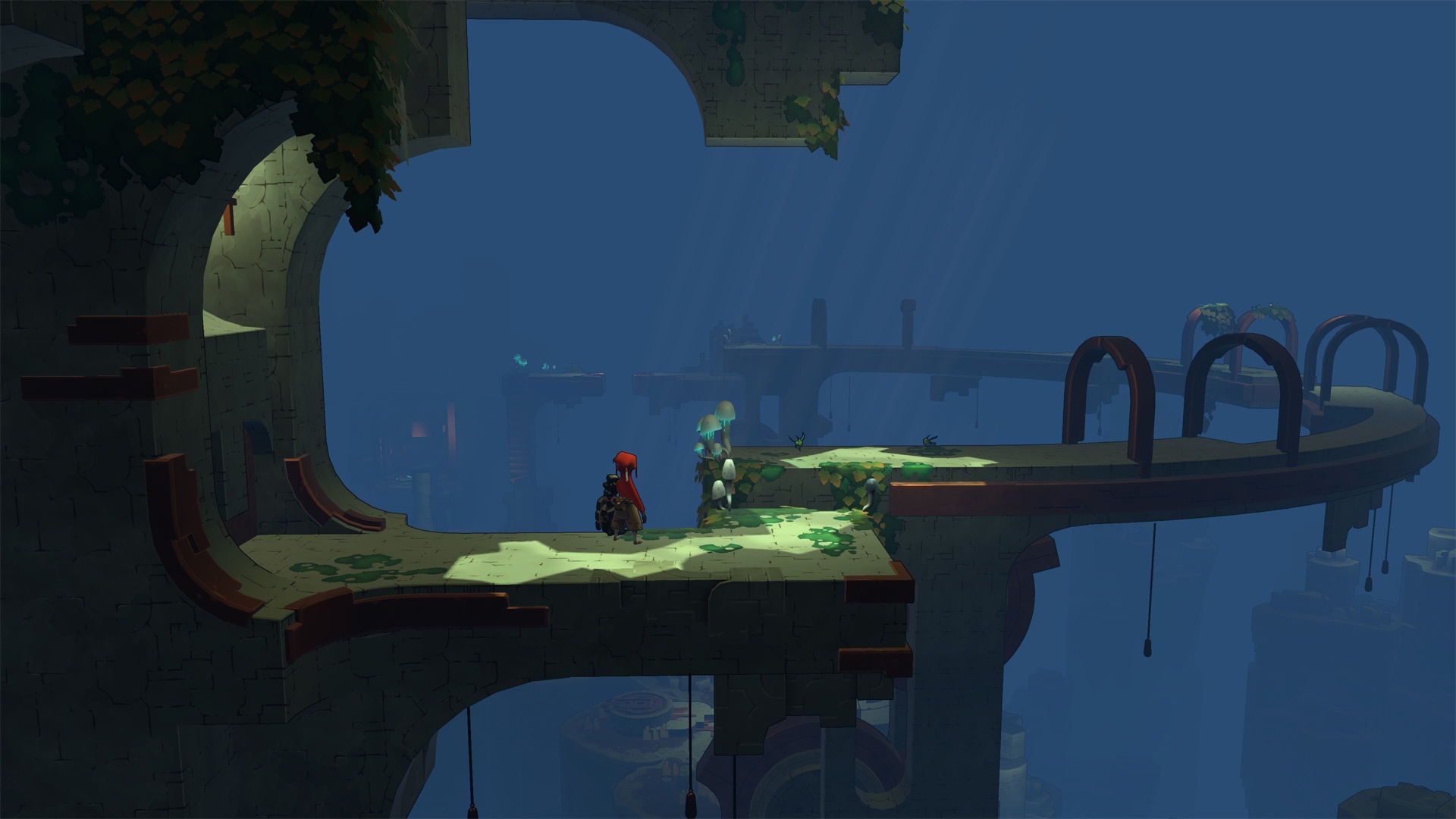 The lack of a traditional narrative with proper dialogue between characters, or at least some sort of explanation in regards to the game world is usually something that I really appreciate, I find that it can add a lot more to the world’s ambiance and mystery, thus making it more engaging to the player to explore. However, Hob feels like it might overextended these things by a little bit. While in terms of gameplay the game engaged me throughout its entirety, which was about 10 hours without doing all the side stuff, the ending left me with more doubts than I would’ve liked, which detracted from the joy that I had experienced so far while exploring the world and admiring the scenery. It’s not that the ending is inconclusive or vague, it’s more of the opposite, it just leaves more questions to be answered even though it provides some closure.

Overall, Hob was quite a pleasant surprise, but I still have a hard time in figuring out how I really feel about it. Sometimes it felt underwhelming, like during combat or when solving a puzzle, but some other times it felt really overwhelming, and, with that in mind, the pros really outweigh the cons. The animations are extremely smooth and very pleasing to the eye, and the same can be said about the colours that were predominantly used in the game, as they make things stand out quite nicely.

There are these spots on the world where your character just sits there while the camera pans out, and it shows you the landscape. It’s a nice little addition to break the routine of the gameplay action and to admire the scenery. And this brings up one of the best things about the game, and that’s not an in-depth combat system, nor great characters, is just watching how the world unravels its mysteries in front of you as you unlock secrets, explore dungeons, and discover new paths. If you’re not someone who’s constantly craving for action, and if this sounds like something you’d enjoy, I highly recommend you pick this one up, as I think that Hob isn’t getting the attention it deserves.