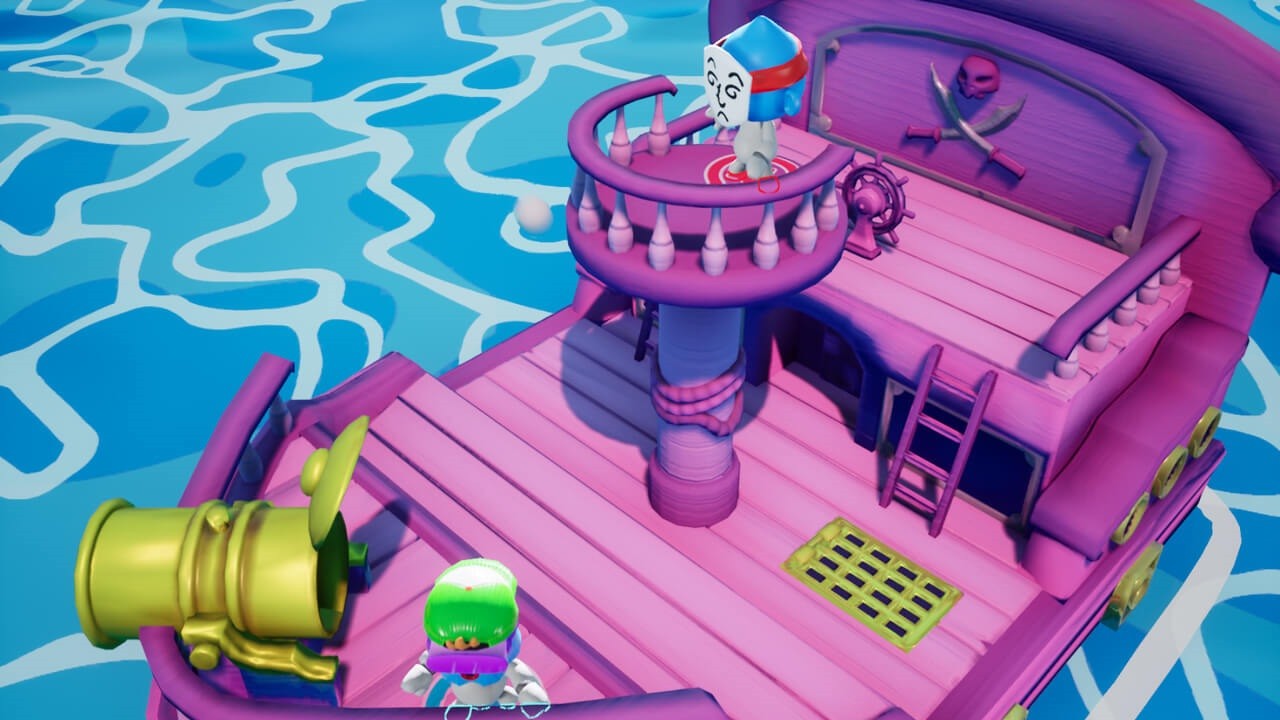 I feel somewhat of an authority on what makes a good party game, and frequently make it my mission to entice non-gamers to make up the numbers in a game for more than two players. The usual ingredients I’m looking in a party game are accessibility, variety, longevity and of course, fun. So when I saw Headsnatchers on the Switch, I cleaned up the lounge and prepped my guinea pigs (real people) for some multiplayer action.

Headsnatchers is specifically a multiplayer game. There are no single mode campaigns (other than a mini-gauntlet challenge) or fetch quests, just rounds and rounds of knocking your opponents block off. The goal in Headsnatchers is in the title; you take out your enemy, then take off their heads. Take their heads and roll with it as you can slam dunk them, flush them – you name it. But, it’s all done pleasantly, so those with a bloodlust can forget about any Mortal Kombat type fatalities here. It’s not as dark as wearing them around your neck as a trophy, and it’s all presented in a cute(ish) way. Japanese text is present with the English on all the menus, but I wouldn’t say that it’s a kawaii style, more Ugly Dolls.

I hate to be the one to break it to you, but you do need to get out more and make some friends. Headsnatchers doesn’t fire on all cylinders when you play alone, so my review of the game is based on the multiplayer experience. Aside from the create a character feature, playing one player is a little on the redundant side. I did try to play online, but on each attempt, there weren’t any other players. There’s the option to run the Zombie Castle which is a wide 3D world to explore in comparison to the tile-like battle arenas in the main game, but I found it quite dull as not much to do. Plus it’s no way as fun as the multiplayer element. 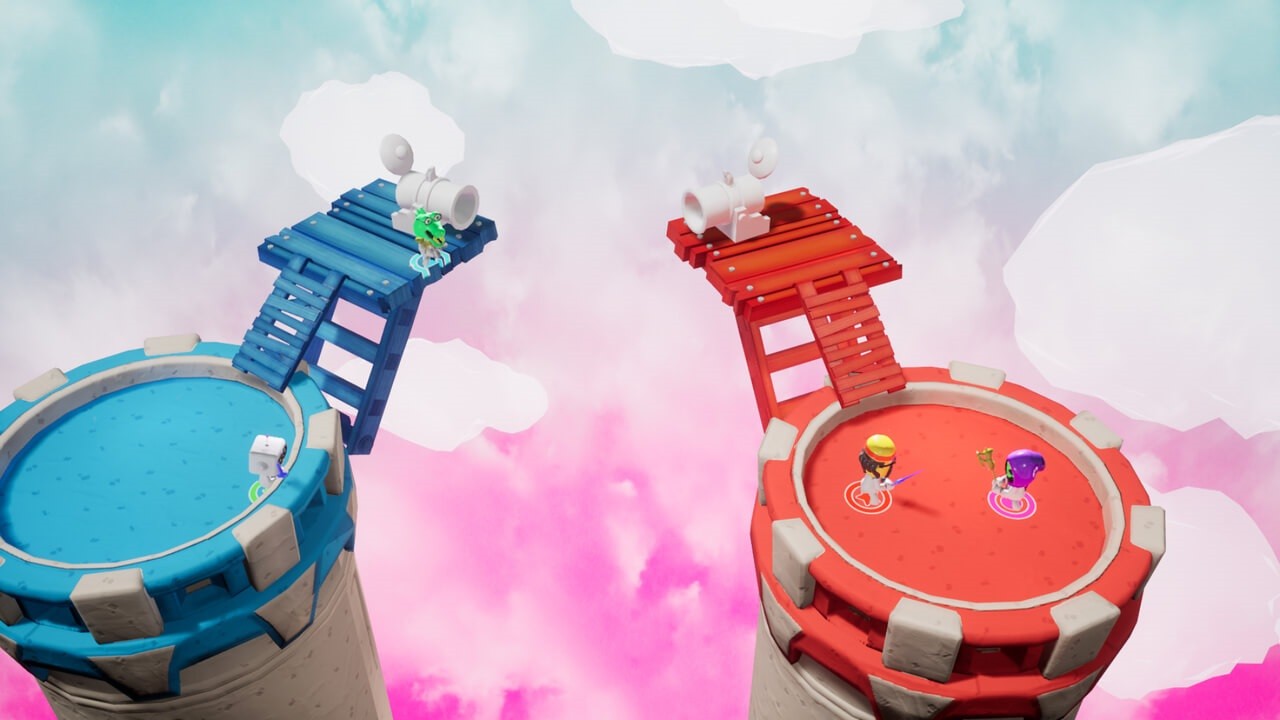 As for the character creation screen, it’s actually quite a bit of fun and I spent all of my time alone fiddling with the numerous settings. The characters themselves feel a bit like they’re styled like clay, but the finish is a bit like plastic. It’s far from comparable to a game like Fallout 76 which its advanced features, but it’s varied enough to make up some weird avatars. The usual options apply, such as choosing their eyes, nose and mouth. There are additional accessories like hats and sunglasses too. This was all there was to the game, until I was able to play a game with and against a family member. One thing I noticed: the music sounds like a variation of the Mii character creator. Intentional?

The actual multiplayer experience is okay and there are a good selection of game modes to choose from. Going the multiplayer route is the way to go with Headsnatchers as depending on who you’re playing with, it can be a lot of fun. The controls are really basic, but in a good way as anyone can pick it up without having to learn any complicated moves. Simple attacks, jumps and dashes are the picks of the day here, and you will have mastered the gameplay in all of 10 seconds. But that’s good, right? If you want a party game, you want to be able to get stuck in without having to explain how to play it. There are of course loading screens detailing the controls anyway, but it’s super easy to pick up and play.

There aren’t any displays of health here, and the principle is simple in that you need to remove your opponents head, pick it up, then run with it. Depending on the fighting location, you can do with it what you will to earn points such as flush it down the toilet. Yeah, real classy! The stages in Headsnatchers are pretty unique, and there are 20+ environments to fight in. They are a bit on the small side and just enough to contain a handful of players – nothing like the Zombie Castle mode which is more of a vast area to explore, if a little too linear and lacking excitement. 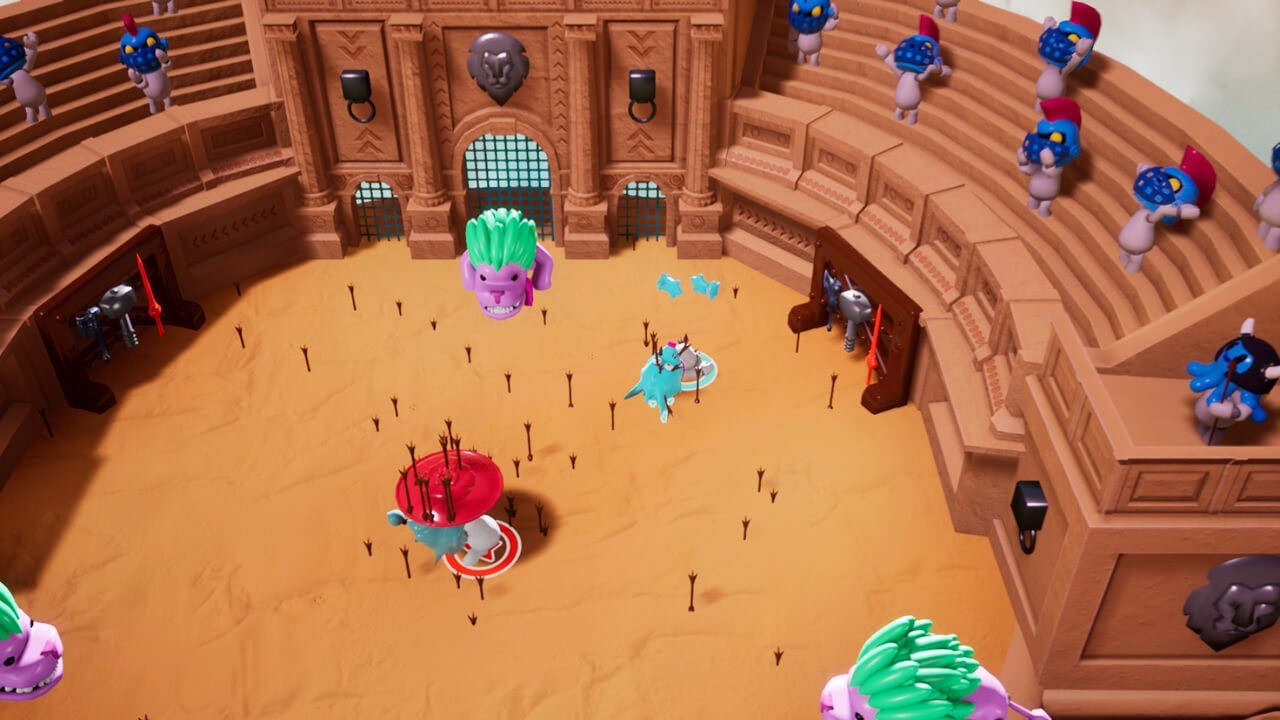 Some of the stages are better than others; mostly due to the design. The sport-themed levels like football are self-explanatory, but levels like the wrestling ring end up being a little too drawn out. It’s a bit like Gang Beasts to some extent: a lot of fun, but as there are no health gauges, games can drag for the players out of the game, and it plays like a knockout tournament. With the two-player, which was my default mode for this review, the game would end when one of us scored a point. When there were four of us, the players who lose their heads early on have to spectate until there’s someone left standing. As I said, it can get a little boring on some of the levels.

I have to say, I was pleasantly surprised with the fun we had with the multiplayer, but I can’t say the same about the Zombie Castle mode or the non-existent (when I tried) online play. From the character selection, the game is promising, but the moment it switches to gameplay, the avatars are quite small, and I felt the graphics looked a little blurred at times. The music is serviceable, but I didn’t like the sound effects as they were a bit on the simplistic side and a bit too repetitive.

The already ridiculous amount of characters to choose from is impressive, but it’s purely cosmetic as they don’t have any special abilities. Also, the addition of a character creator is a bonus as I find myself playing Headsnatchers quite often as a multiplayer, and expecting this to be one of the few Nintendo Switch party games I’ll be using as a go-to title, I want to be able to customise my fighter. Sure, it gets a little frustrating with the back and forth attempts and stealing a friends head, and if you’re of the same skill level, you may end up having really drawn-out battles that fall into the tedious side of things for those having to watch. If you like a bit of a mindless free-for-all without having to learn a series of complicated combos, then Headsnatchers is a fun party game, but if you don’t anticipate playing local games, I’d probably give it a miss as the online option was redundant.

Try not to lose your head in this multiplayer free-for-all. A good selection of stages and characters to choose from, but other than stealing one another’s heads, there’s not much new on offer here.

Lots of fun to be had as a local party game
A ridiculous amount of characters to choose from, plus the custom creator
Quite a good selection of levels and modes to choose from

Not much to offer for solo plays
The online feature didn’t work for me – there wasn’t anyone else available to play
It can get a little manic sometimes, and the controls aren’t as responsive as you’d expect