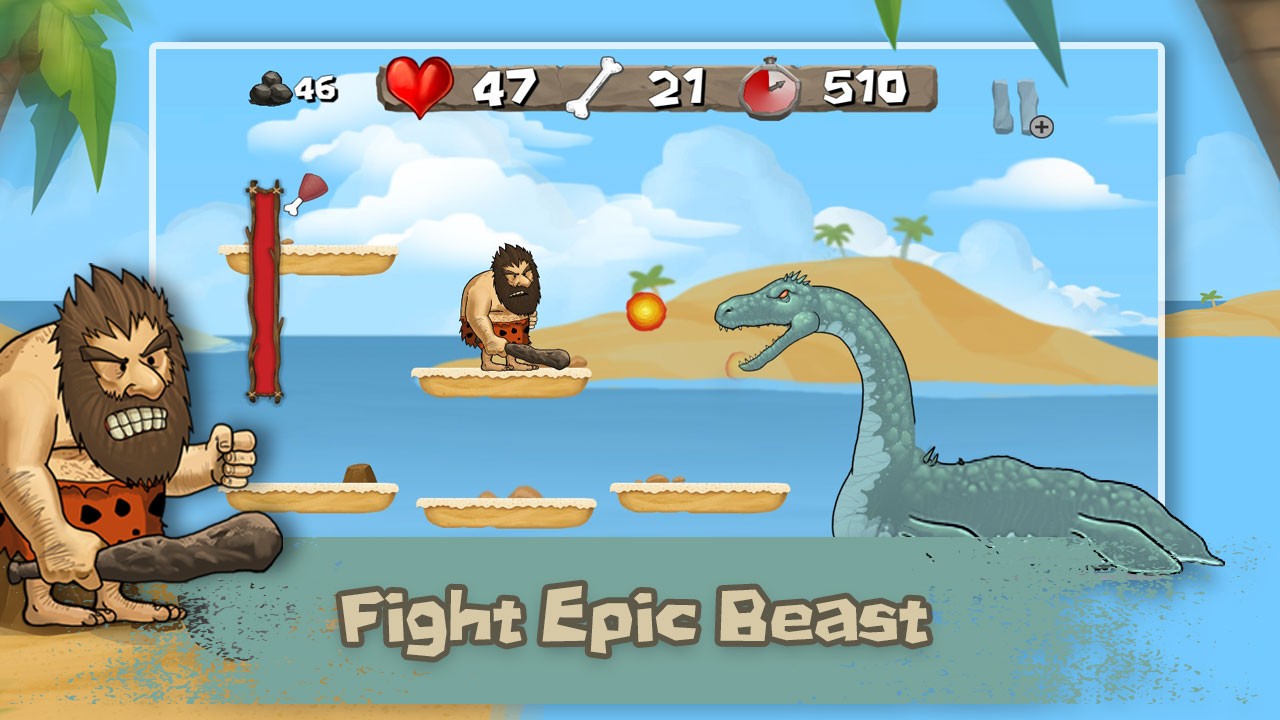 There are some people, unsurprisingly, who say that the Switch will be remembered as one of the greatest, if not THE greatest, consoles of all time. It’s easy to see why: Nintendo brought close to current console perfection in a handheld way and paved the field so that everyone could come and play in the Mario Garden. So you don’t just get titles like Animal Crossing (soon!) and Metroid (WHEN??), but you can have Dark Souls, LA Noire and DOOM on the go as well. Is it perfect? Hell no, it isn’t perfect, but it’s such a damn good system that I can’t stop playing games for it. But there’s a price that comes with this inclusion. Once again, mobile games continue to trickle into the atmosphere, and you gotta take the good with the bad. Unless it’s legitimately awful in content or breaking the system, you need to let the game come on in if the devs pay the money and put in the time. PrimeBit Games put in the time and effort to bring their 2D platformer, Caveman Chuck, onto the Switch, so we need to let them play too. But that doesn’t mean I have to like it.

You play the titular Chuck, who is, as you imagined, a Caveman living in prehistoric times. Don’t bother trying to do the actual timeline rationale that comes with these sort of games: just like Joe and Mac, we can pretend that dinosaurs exist alongside of Neanderthals and it’s all hunky dory for the most part. Chuck’s wife is annoyed at him for doing nothing and…goes out to go shopping, because this is a Sinbad bit from the 90s, I guess. Then the wife gets kidnapped by a pterodactyl, and Chuck is…relieved? Yes, he’s glad his nagging wife is gone, so he can finally relax. But then Chuck gets hungry, and he realizes he needs his wife to cook for him, so he goes out to rescue her, figuring she can cook the giant flying dinosaur once he saves her and kills it. That’s our protagonist, and, as awful as that setup is, that’s what we need to use to move forward. 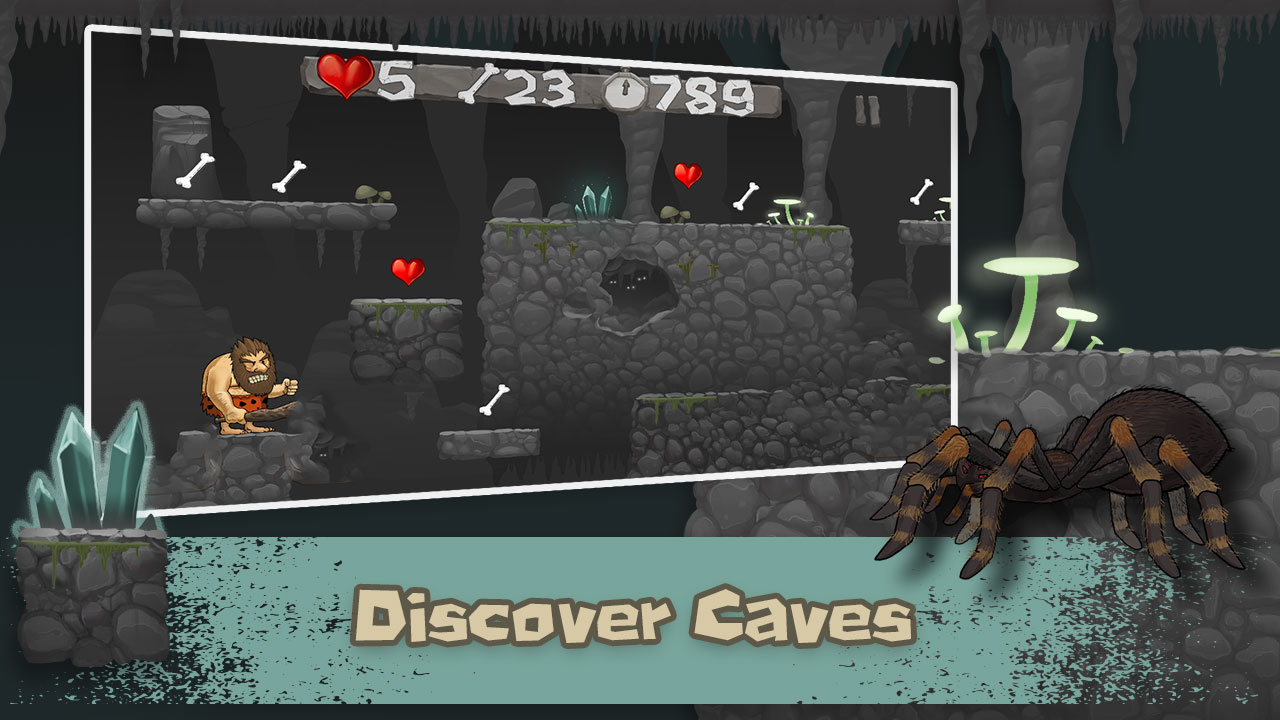 Each world of Caveman Chuck is divided into three stages, and they all have the same basic formula. You need to get to the other end of the stage without dying too much and you can pick up bones for points, kill enemies for points and occasionally get some extra lives or health items…for points. The problem is, you never see your points total until the stage is done, which could be an issue for the OCD among us. Like most mobile games, you get a star ranking at the end of the stage, but the rank is entirely dependent on your time and your points, and you never see your score as it crawls upward. So your entire drive is “kill all, get all” in order to win, but that’s a kind of insanity that we didn’t even see in old arcade or NES games. Why don’t we have a points tally on the screen? The HUD is full of other information, including the timer, your health and the number of bones you’ve collected, but nowhere is the important points total, not even when you pause. So there’s already an issue there, but we try and soldier on, because the objective is still clear: kill all, get all.

Then you get the game itself. Caveman Chuck suffers from floaty controls, which is most likely a direct result of having a port from a game that did middling to fair at best on the mobile side of things. You can jump and you hold down jump longer to move further, but that’s not really a great approach to anything. You can pick up very important rock projectiles if you’re lucky enough to find them (sometimes enemies drop them, sometimes they’re hidden inside obelisks), but you’ll drop them ALL if you get touched and take damage, and you need the rocks because the reach of your club is pathetic at best, and you will almost always take damage if the enemy moves even a little. Chuck will often coast for a couple of steps once you release the arrow key, which can mean any one of several terrible things. Maybe you’ll crash into a saber-toothed tiger and lose some health or, worse, die outright. Maybe you’ll end up pushing something off the screen behind you, because this apparently takes cues from the original Super Mario Bros games and won’t let you go back for anything. Or, just maybe, you’ll float right off the ledge and die, because that happened a couple of times. Since you move downward through platformer through pushing down and nothing else, there were a couple of times that Chuck overcompensated and went through two levels of stage (not one), leading me to die and lose one of my…wait, thirty lives?

Yes, in the original mobile release of Caveman Chuck, PrimeBit Games picked up cash by releasing the game for free and then charging a fair amount for picking up extra lives. They’ve tried to balance this on the Switch release in a threefold attempt. First, you start off with a Contra cheat level of hearts, fair enough. Then, there’s usually one extra life per level, which helps out. Lastly, the game launches at 4 dollars, which is cheaper than what you’d pay for that many lives on the mobile version. I gotta give them credit, they did shuck out all of the IAP, which not every developer has done, so I appreciate that. But the construct of a mobile game that wants to milk your money is still there, and you feel it with every moment you play the game. 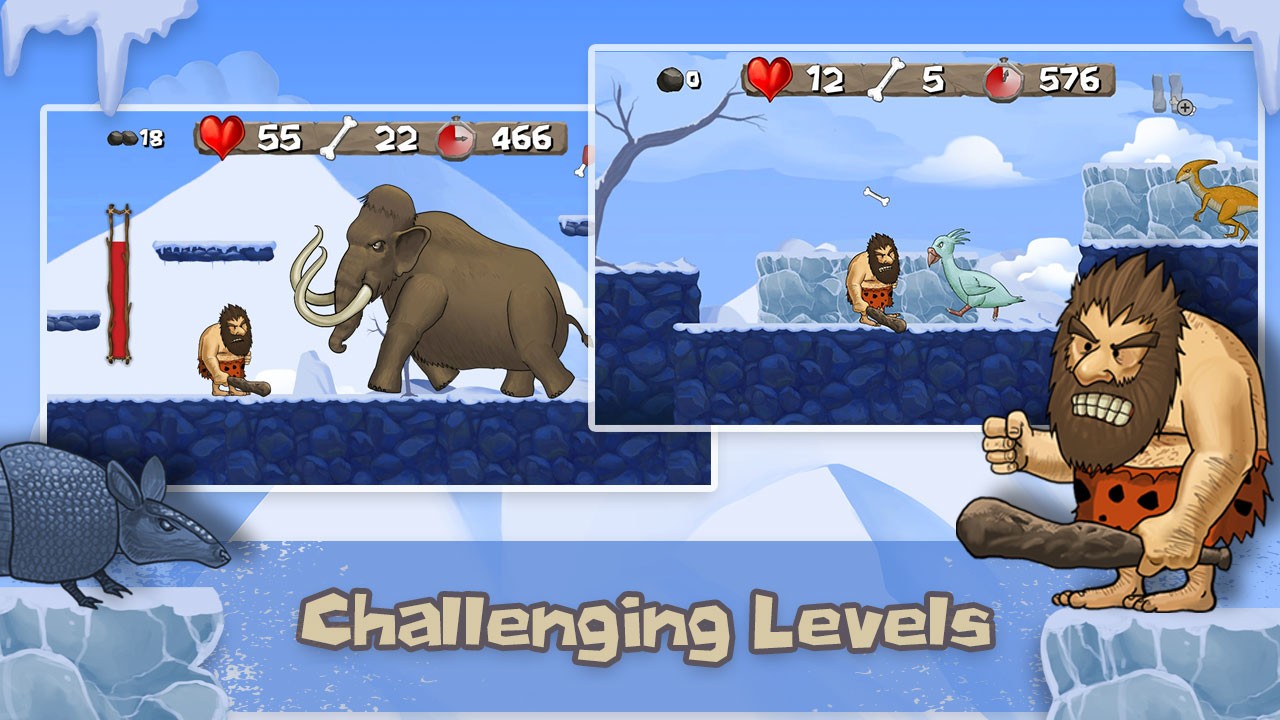 Enemies with indiscernible hit boxes? Check. A weird, erratic way to measure how much health you have left? Check. Bosses that are impossibly large and stupid to deal with unless you theoretically had a power up from IAP (the golden club, I see you), so, instead, you gotta beat your head against the wall figuring out a massive T-Rex for close to fifteen minutes? Freaking check. This is all while dealing with the undeniable fact that I don’t want to help out Chuck: he’s an unappealing jerk of a protagonist who uses some 1970s level of husband/wife relationship balance (or Married with Children minus the humor) to justify the game’s existence. Also, he just doesn’t look good. Yes, he looks like a caveman, but he’s somehow a more unattractive caveman than I could fathom. It doesn’t help that, due to logo positioning and his angry pose, it looks like he’s farting out the PrimeBit Games logo for the game’s icon. Also, it looks like maybe this game was quietly taken off the eShop and rebranded as a slightly different game (Caveman Chuck: Prehistoric Adventures), but everything tells me it’s the same damn game. Does that mean PrimeBit Games put a different hat on this game to try and sell it as something else? Who’s to say, but it was a chore to get through.

Couple that with some very basic and tinny sound effects (Chuck jumping reminded me of the punch noise from the SNES’, Pit Fighter) and the same damn song over and over for the soundtrack, and you’ve got something that really just doesn’t work on any level. It’s far too expensive to justify grabbing to shut your kids up, and it’s going to make most civic minded people roll their eyes and drop their Switches after a few levels and realizing that it’s super formulaic and repetitive. There’s no grand payout, and there’s nothing that makes me say “but at least there’s this” other than “at least PrimeBit Games didn’t screw the players harder.” I’m sorry, but I didn’t enjoy it and I doubt many others will either.

It takes only a minute to realize that Chuck’s people probably went extinct for all the right reasons.