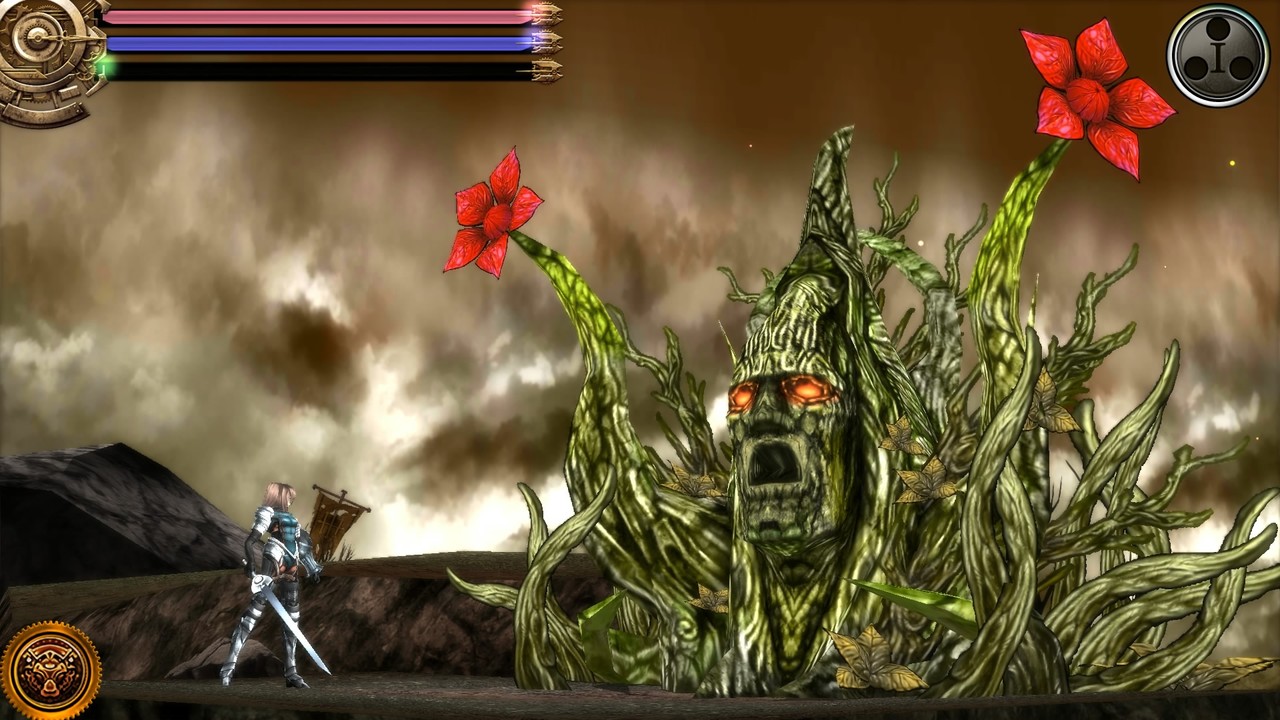 Cher put it best when she presented the yearning question of “If I could turn back time.” Time, that imaginary bastard that governs all our lives, is something that we yearn to harness, to yoke, to be commander and bring about some sort of order through the control of time. We could right wrongs, save lives, prevent war, invest like maybe fifty bucks in BitCoin back in 2011 and then never think about it again. It’s all something where we look back and say “if only.” In the world of AeternoBlade, we take those moments, those feelings, those split second spots of darkness in our memory and grant the ability to move, freely, back through time. With a sword. A big, sharp, bloodthirsty sword.

AeternoBlade puts you in the shoes of Freyja, a plucky young woman who starts the game by immediately getting murdered to death by a big dude named Beladim who controls dark magic and couldn’t care less about your stupid sword. Suddenly, you jump back to seven days before: as it turns out, Freyja has just (seven days ago) fled her own burning village that, surprise Beladim torched. Far from simply curling up into a ball and weeping until she died from dehydration, Freyja sets off to find Beladim and do her best to avenge her family/village, and, thankfully, she runs into a dying man who happens to be holding the most powerful weapon of all time. She also, after finding Beladim and promptly getting her ass murdered again, meets Vernia, a sorceress of some kind who clearly has a ton of power, can’t fight Beladim herself, and names Freyja as the power that will, with some exploration, topple Beladim. Vernia clues Freyja into her sword as the legendary Aeterno Blade, which can be powered up to seal Beladim in an endless void as long as Freyja goes on a quest to find all the pieces that have been lost from the Blade. There is nothing suspicious in any of this, especially not the part where Vernia won’t answer most of Freyja’s questions and there’s clearly some kind of deal going on with how this farm girl happened upon the most powerful sword in existence. No matter, we’ve got a quest now, so it’s hunting time! 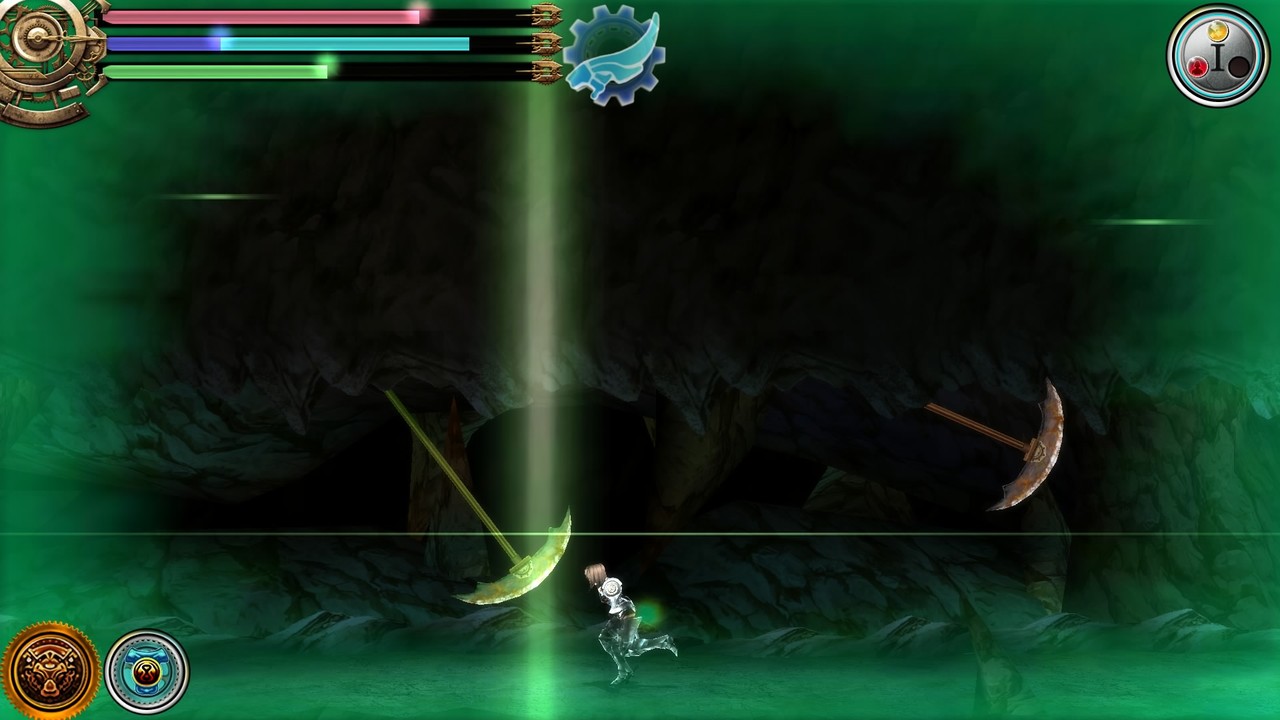 AeternoBlade plays out in a 2D, side scrolling pseudo adventure game, where Freyja has only a few lands and only seven days to explore, power up her sword and then confront Beladim again, hopefully for a successful victory that absolutely will have no twists or shocking reveals in the final moments.  Freyja has to deal with enemies that respawn if you leave the room (even if you kill them all), traps of trial and error variety and, naturally, a series of bosses that appear at the end of each level. Thankfully, the AeternoBlade does a bang up job of stabbing things and slashing things, and it also keeps true to its word about time manipulation. You start off with the power to simply roll back the clock a few seconds, which is perfect when you step into one of the aforementioned traps. Eventually, the Blade grants you a ton of different ways to mess around with the time stream, including rewinding time for everyone except you. Given that the time mechanic is the crux of the entire game, it’s satisfying to see it not only work well but also be fairly easy to use. You have a magic meter that gets refilled with dropped blue orbs from enemies, as well as it automatically filling the second you hit a checkpoint.

Each of the levels will, for the perfectionist, require multiple visits in order to obtain all the secrets. Right after you get away from Beladim in your second encounter, there’s clearly this beautiful orb that contains some kind of power or relic inside that is just beyond your reach. “If only I could double jump!” you proclaim in anguish, and then move on. Surprise, you’ll get to double jump later, and then you can trudge all the way back to the very beginning so you can claim your prize. The game doesn’t hide the fact that replay and backtracking is the secret to completely powering up your blade and character, so at least there are fewer hidden secrets than you’d expect, and just a lot more “clearly I have to come back and get that later.” It can be frustrating, but at least it’s honest.

A vast majority of the enemies in AeternoBlade are just grunts that pass the time before you reach the bosses, and you dispatch them as easily as you’d think. Since you can add new moves and greater powers to the Blade’s abilities as you replay and level up, the enemies become time-wasting fodder and generally a nuisance by the time you reach the third level. It’s still important for you to be able to obtain more skill points, and the only way you can do that is by slamming around a few minions, but it still felt like there should have been more of a challenge than “Aha, now there’s FIVE enemies on screen, good luck hitting them all!” It did help keep the boss battles in sharp relief, however, since those tended to be a.) visually quite different and b.) required time mechanics in order to beat them. The first boss will simply destroy you with no save if you don’t use the time rollback ability the second he starts casting a certain spell. That’s kind of the entire focal point of the game, and, sometimes, it felt tedious, like “Oh, I sure hope I can not run out of mana before I finish beating this dude to death.” 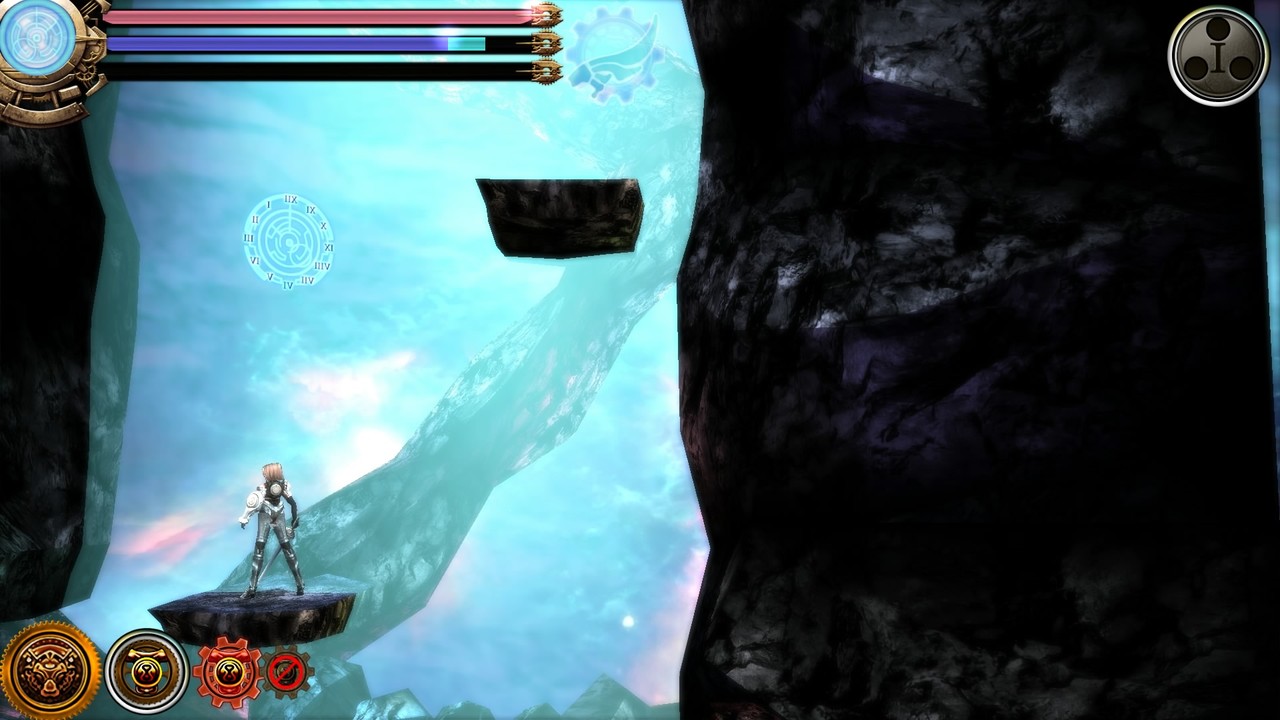 Graphically, AeternoBlade is pretty rough at moments. The cutscenes are decent, and it looks like the designers took a lot of cues from Final Fantasy X in terms of character design, though I couldn’t believe Freyja changed so much from her first to last appearance. Once you’re in the main game, however, the movements can be stiff and stocky. Some of the enemies have really boring, repeated textures just impressed upon them, and the polygons are sticking out too far in several instances. It’s not a problem, because, again, the game itself is pretty decent, but I found myself kind of disappointed with how some things looked.

But, if you can get over the boring color palette and ugly enemies, I think you’ll find there’s a lot at the core of this game for anyone to enjoy. The replay value is real, and the exploration is actually pretty good, with plenty to go back and discover again and again. 100% isn’t needed to finish the game, but doing so gives you a real sense of accomplishment, as well as a variety of relics and powers to work with. Freyja is a believable heroine, and I just wish she wouldn’t be so naive about what is probably waiting around the corner for her after she confronts Beladim once and for all. In the end, though, it’s a good use of time, a pretty decent story and a solid puzzle/action mix with the time control mechanics. A good spot for any Switch owner to be in, AeternoBlade might be the best little title that you’ve never heard of.