Hunting and Spearfishing aren’t really the top of my agenda and I want to start the review off by saying I don’t really condone hunting per se, however I realise there are cultures across the world where this is life for them. This is a genre that I wanted to explore as there is clearly a market for hunting games and there is a plethora of them now for console the majority of which are land based hunting titles. I was keen to discover how freediving and spearfishing would work within a game as hunting games aside there are a fair few fishing based titles on the market right now which will please the angling based community. So this will be particularly pleasing as another one becomes available which has a slightly different spin on it to traditional fishing.

After reading into the development of this title its important to state that the original concept of this experience started on mobile devices which always makes me slightly wary of how they can progress what would be a basic visual encounter. The lead developer is said to have expertise in the field of spearfishing so this was promising to hear when first learning about this title. The game starts with the same premise as many with a tutorial to steer you towards learning the basics of spearfishing and finding your way around the water. You’ll have a swimming pool at your disposal and plenty of time to learn as the tutorial sets you on the task of how to firstly swim and rise to the surface of water and eventually leading onto how to shoot the spear at your target fish and reel the catch towards you. 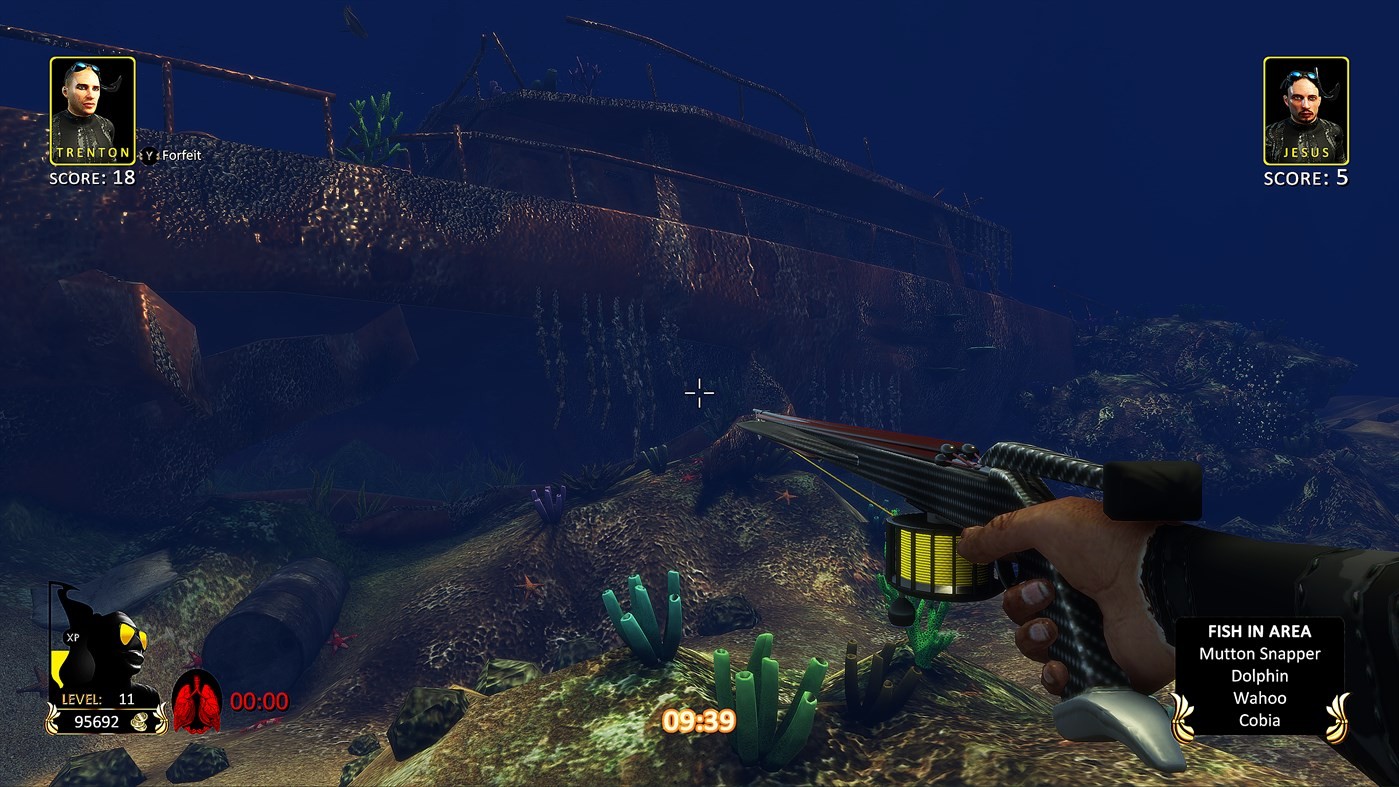 Once the tutorial is done and dusted you can move onto the good stuff which is actually venturing out into the open oceans to hunt for real. From the outset you’ll quickly realise that even though the graphics and visuals aren’t out of this world environmentally they capture what you’d expect from an underwater adventure and it does it beautifully so. There is a variance of reefs, a cascade of types of fish and even the dreaded sharks. I was actually taken aback with how decent the game displays for its price point. I was ever so impressed with the way the fish reacted to me swimming underwater, as with real life the underwater life avoided me and changed directions and made the hunting aspect a real challenge to undertake.

As you set off on your adventure you will travel to various locations across the globe and challenge other members of the spear fishing community once you land. When you start battling against the other spear fisher this is usually a timed mode where you will have to fill a quota of catches within that time period. You have to be cautious at the time spent underwater and ensure you surface for a gasp of oxygen before you plunge back down and try again. I found myself becoming somewhat anxious at the timer ticking down as a desperately tried to get the catch on a Barracuda whilst the other spear fisher was in my view. This wasn’t a bad type of anxiety though it enabled me to push the character I was using to its limits as I literally tried to catch fish until I was anticipating more oxygen. Why couldn’t they just have an oxygen tank, I don’t know, but then that would take the challenge away. Once you master the challenge and beat your opponent you are then free to explore this area at your own pace as you then have unlimited time to make more catches to raise your experience in order to unlock the next area.

There is incentive to keep on playing these tasks as the experience you gain rewards you with in game currency to purchase items to tailor your spear fisher such as some shiny new goggles or a sparkling set of flippers. The control system was surprisingly easy to master as my experience with other fishing titles were somewhat confused as the control scheme on them can be overwhelming. What you will notice here is the diving, swimming and navigation are straightforward and your catching and reeling are slightly more demanding. 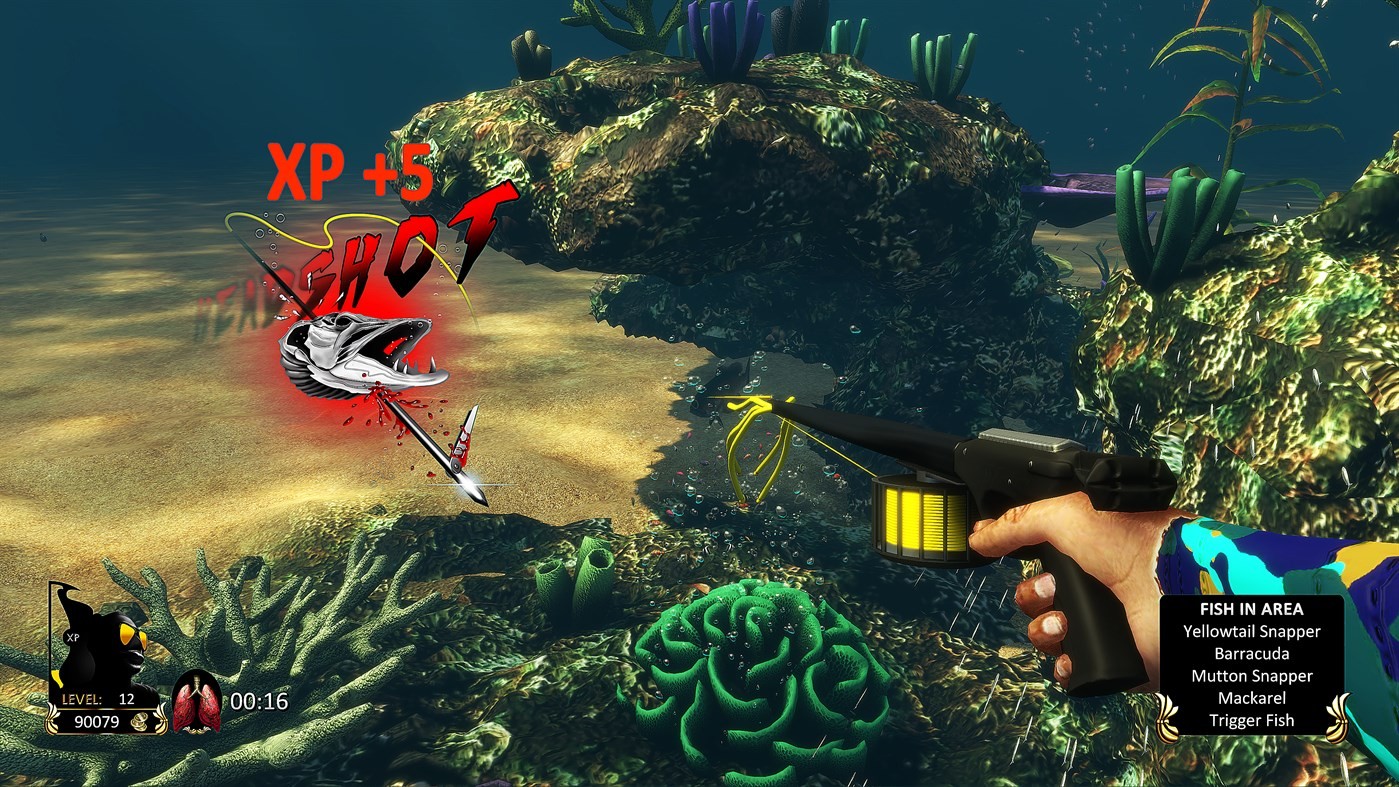 Once you have a fish in sight you will notice a crosshair which changes red in colour and once you hook your fish you are then left with the battle of reeling that fish towards you. There are on screen commands which you will require left trigger and analogue sticks to respond to. If you manage to shoot the fish square in the head then it registers an insta-kill and you do not have to battle it out to reel it in. What I found slightly unrealistic is the fact there are sharks swimming around who will latch onto your failed attempts and consume the fish but appear to be unbothered by a human floating around.

To wrap this up I have to say I was pleasantly surprised by this title. It looks visually attractive for its game type and price point and it plays as well as you could imagine and to be fair their isn’t much competition to compare it against. It can be very repetitive but I found it to be quite relaxing to play once you plough through the timed modes. If you love fishing or hunting in general then this may be game you would love to play and try but for those who are dead against the slaughter of animals then you may be against the thought. There are some visible glitches and bugs which may or may not be ironed out over time which is down to the commitment of the development team. I did notice at some stages that fish seemed to swim straight through objects and I felt like I was controlling a young Paul Daniels as I watched them vanish before me. I will add though that this isn’t game breaking stuff and you have to admit sometimes glitches and bugs are good fun. The hardest challenge with the game was trying to battle the commands when catching fish and then watching the timer tick down for a refresh of oxygen. Sometimes you’re spending more time looking at power bars and ticking clocks than the fish you are actually catching.

I felt a bit critical pointing out some of the more noticeable issues but I have to highlight the bugbears as with a little more polish the game would improve massively. But we have to appreciate that there is no other game like this one and that should go down as a triumph in gaming history. So all in all its a good fun game which could have been even greater with more time.

The first Spearfishing Hunting game ever to grace a console, an experience that is both visually beautiful and relaxing to play. But its glitches, bugs and control system can be frustrating to some.

Calming, relaxing and peaceful to play

Graphically great for the price point

The control system can sometimes make it difficult

People sensitive to animal slaughter will want to avoid this title