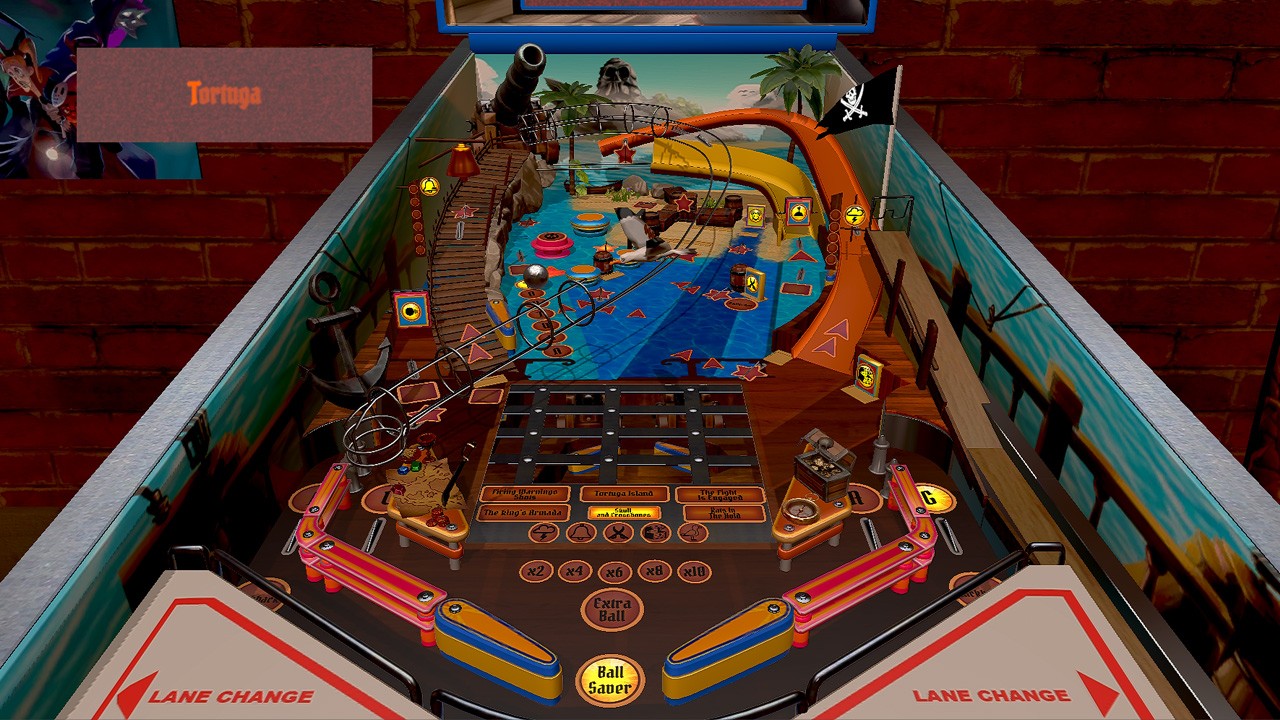 Shiver me timbers, walk the plank and Roads? Where we’re going we don’t need… roads! These are the least likely lines a real pirate would say, but we’re all familiar with how they’re represented in pop culture. Whether you’re a Jack Sparrow fan, Guybrush Threepwood disciple or got your taste for pirates from searching for Libertalia in Unchartered 4, chances are you’ve encountered them in some way or another. Now it’s time to meet them in their real environment: pinball. That’s right; Pirates Pinball on the Nintendo Switch.

You’ll forgive me for explaining the concept of pinball, but if you’ve just stepped off the Queen Anne’s Revenge, let me give you a summary. The pinball machine features a plunger on the bottom right of the machine that when pulled back, fires a metallic ball in the play arena. The purpose of the game, and Pirates Pinball, is to get a hi-score with the few balls you are allocated. Should these balls drop to the bottom of the screen, you repeat the process until the balls are gone. If you get a high enough score, you can earn bonus balls to keep you in the game longer.

As the machine is at an incline, the ball will always head to the bottom of the table; therefore your role is to keep the ball at the top of the screen by hitting the paddles or flippers. They are located at the bottom of the screen and operated with the L and R buttons. When the ball lands on these, you hit the button to send the ball back up again. There are of course tricks to manipulate where the ball will go, ensuring you get the most points, but that’s all there is to the game. 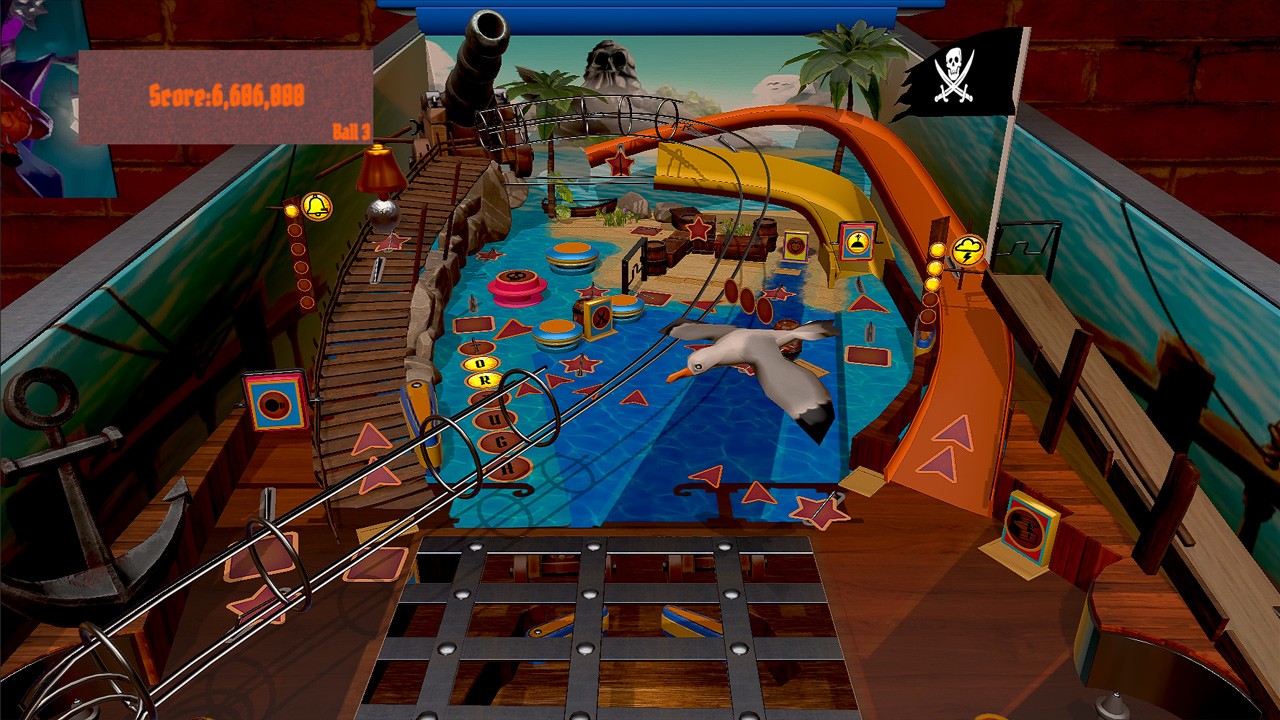 Pull back on the right analogue stick, and it will send the ball hurtling up the table. Due to the nature of the analogue control, you can adjust the power, but to be honest, I just punt it. After all, pinball is a game of chance. You do have another ‘weapon’ at your disposal in that you can press any of the other buttons (aside from the flippers and plunger) and they will shake the table, known as a tilt. This can turn a game in your favour, but if you do it too much, the balls will roll out of play. A shame then really, as all the other buttons have no pressure gauges, so as soon as you use them, you get a ’tilt’ notification and warning alert, and the ball then falls to the bottom.

How about the pirate element then? What stands out in particular that sets this apart from other pinball tables? If you’ve ever played a pinball game in your local arcade (if you even have one anymore), you’ll note that all of them are built almost identical but have something that makes them unique. Pinball machines are generally quite a frantic set up with flashing lights and explosive sound effects. Take, for example, a real-life pinball machine such as The Simpsons; the audio will play each time you hit a bumper or blast out a jingle as the ball rises up the ramps. That doesn’t happen in Pirates Pinball. Apart from a nifty cannon effect that swallows up the ball and fires it out and a stray seagulls; there’s nothing that sets it apart from the rest. The outer machine resembles decals you would see on these machines, but aside from a few visual choices to insinuate that you are playing on the deck of a ship, it’s pretty plain.

Pinball machines pop. If you’ve ever played one, you’ll know how good they feel when you’re slapping the sides to send the ball up the table. Or how about the thumping when you hit multiple bumpers or the sound when the ball goes down a gobble hole (a physical hole in the table which makes your ball disappear, only to be fired out further afield) – it’s a hectic experience. Back in the day, I used to play Pinball Fantasies on the 16-bit machines, and this title got it right. The table design made a clear distinction that specific parts on the table would score high. Equally important was the sound. The music throughout those games all had their themes and often featured a catchy little hook. Even the sound effects were dynamic with voice effects too. Pirates Pinball features one musical piece that wouldn’t be out of play at a second rate theme park or DVD menu. It’s dull and once it finishes, doesn’t fade out but cuts off then repeats. Suffice to say, I played with the sound off and didn’t miss anything. 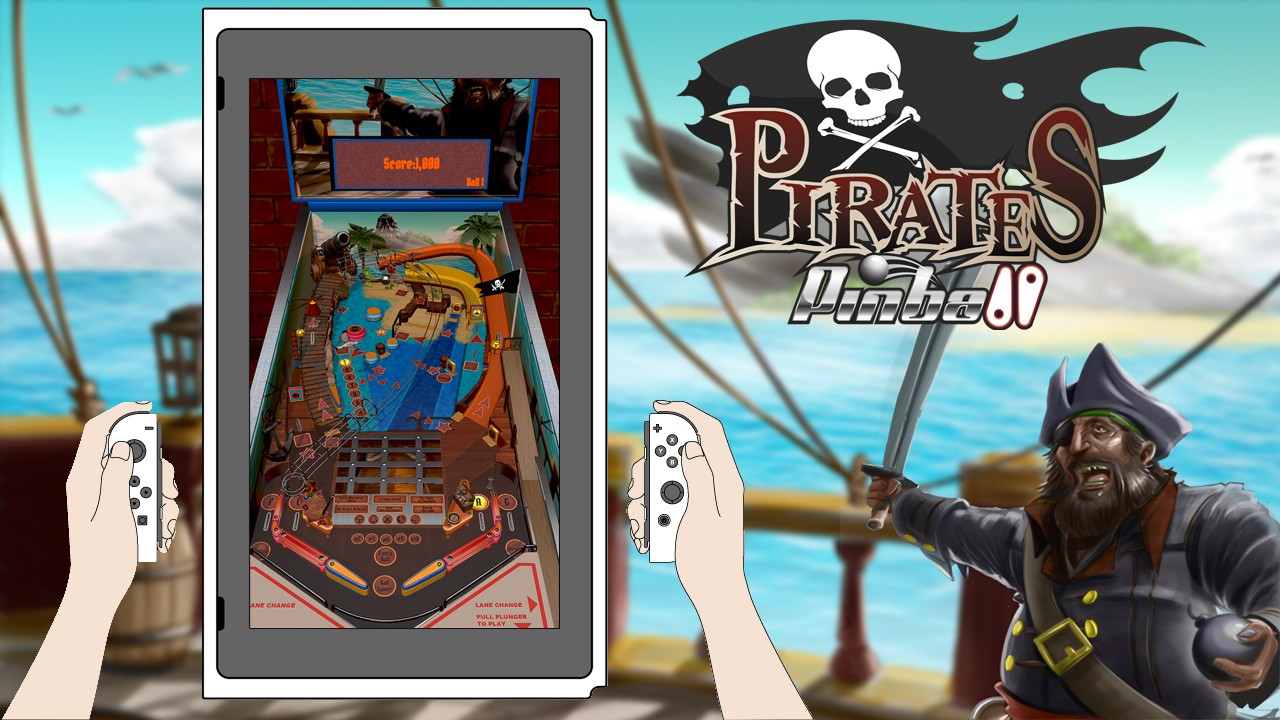 Additionally, there’s only one table. There could have been more than one, perhaps with a different theme even if it were cliche. A treasure chest, the Caribbean or even a concept table built around a pistol or cutlass could have been practical alternatives. I understand that there are other games in the series such as dragons and soccer, but it would have been better to have a standalone game with all the tables, or if going for a theme, at least three tables for each field; pirates, dragons or even cheese pinball. Perhaps even introducing additional paddles further up the table or areas that are lit up that say how many points there are up for grabs. I was also disappointed with the score tracking. The backbox, the back of the table that displays your score, is unexciting. Your score is shown in the top left in a hard-to-read orange font which hardly stands out. I’m not saying you permanently need to see the backbox (you can always adjust the view with the – button – there are four views in all), but it’s a wasted opportunity. Even some of the old 90s pinball games had a featured animation on the LCD screen. It just lacks excitement.

Ignoring the issue with the shake buttons, the controls are responsive – even if they are only three buttons (the plunger and two paddles). The ball feels like it has weight to it too and handles accordingly when making its way to the top of the table. I would have liked to have seen a two-player option seeing as the game lacks so many features, but instead, it has an online leaderboard. I ranked in the top 500 or so, but it could have been in the top 5 or top 5 million – I wouldn’t have been that fussed as it seemed surplus. I was going to suggest a vertical mode for future iterations, but I was pleased to see that you can switch to this in the options menu. But how does this affect the button placement? It doesn’t. It’s the same layout, so in this case, you hold the Switch with your left hand and operate the paddles with your right hand – pressing L and R respectively. Unless of course, you detach the joy-cons, but if you have a Switch Lite? It’s awful. Even the mapping for the plunger is the same. Instead of the analogue stick rotating so that holding right is now down, it remains the same and feels awkward.

Overall, I was disappointed with Pirates Pinball. I understand that you can’t reinvent the wheel with a game such as this, but seeing as other titles have managed to do this over 20 years or so ago (Pinball Dreams and Pinball Fantasies), I would have liked Pirates Pinball to be more ‘in your face’. What I mean by that is the feeling of urgency and frantically slapping at the flippers to ensure the ball keeps momentum. When I hit a bumper or unique location, I want to see an animation on the backbox, like in real-life, and some fanfare.

With Pirates Pinball, I didn’t take away that form of excitement. It’s a shame as the controls handle well, but the overall presentation and gameplay felt so uninspired, that I am highly unlikely to come back to this. There are other themed tables in this series available separately – not as DLC, but a separate game. Again, it might have been worth these all being packaged together as the other games might be stronger than this. However, based on my experience of Pirates Pinball, I’m not in any hurry to play the other games just yet.

Despite being a fan of the golden age of pirates and liking a pinball game here and there, with Pirates Pinball I’d opt to take the plank for just that more excitement.

The table design is uninspired with minimal identifying features
Vertical mode is redundant for a Switch Lite
Repetitive, dull music, with lacklustre sound effects
Lacks any energy and feels unexciting