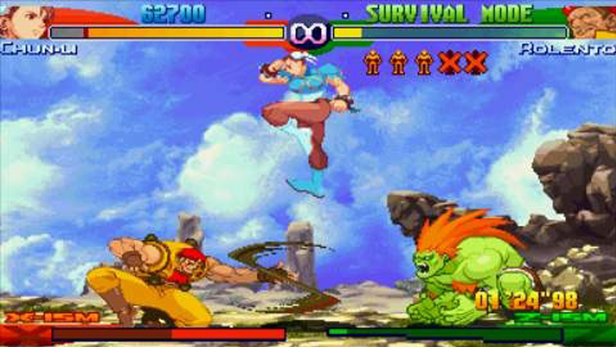 With so much fanfare surrounding the recently released Super Street Fighter IV on the 3DS, I thought it as good a time as any to go back and review what I still believe to be the finest handheld 2D fighter (or 3D for that matter) of all time.

Street Fighter Alpha 3 Max is not only a perfect port of the arcade original but it even manages to outdo the all but faultless Dreamcast port by adding even more features and modes to a game that was already bursting at the seems. With Arcade, Training, World Tour, Edit, Survival, Ad-hoc multiplayer, Final Battle and Dramatic Battle all vying for your attention, this is a game that will keep players busy for months and months on end……and that’s without taking into account the 40 playable characters and the three unique ‘isms’ available to each fighter – to say that Alpha 3 Max is exhaustive would be something of an understatement.

While the core Street Fighter II template is still very much apparent here, the addition of unique attacks, more powerful and visually stunning super moves and the aforementioned ‘isms’ helps the Alpha series stand out as a unique, more attack minded beast. Fights feel faster and more kinetic than they do in Street Fighter II and IV, with the ‘isms’ in particular giving players an almost unprecedented amount of control over their fighting style and approach to battle.

A-ism is the standard Alpha approach that allows for a three tiered super combo gauge which gives access to every one of each characters super combo moves and will provide the default for the majority of players stepping into the world of Street Fighter Alpha for the first time. X-ism is an approach based on Super Street Fighter II Turbo and provides only one level of charge and does not allow air blocks but has the added pay off of an even more powerful super combo attack, while V-ism allows players too pull off unique custom combos akin to those found in Street Fighter Alpha 2. Each ‘ism’ has its own strengths and weaknesses and will provide players all the chance in the world to find the exact approach to suit their style of battle. Honestly, before you even start on the lengthy World Tour, you could easily spend days just experimenting with each style. 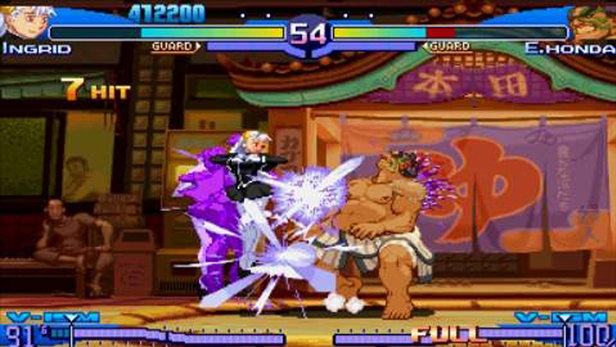 With Training and Survival modes providing the usual self-explanatory additions to the Alpha 3 package, it is the traditional Arcade Mode that will provide the first port of call for the majority of gamers, providing a ten or eleven strong list of enemies to battle through with two Rival challenges to take on along the way and the usual boss battle at the end. While the warm embrace of Arcade Mode and the chance to unlock the simple but mildly entertaining character-specific endings will always prove alluring, it’s the World Tour Mode that will keep players coming back to Alpha 3 for the long haul. Playing out as an almost rpg-lite fighter, this mode tasks you with more specific challenges and allows for the customization of your character as you go. This potentially allows for the creation of a character completely suited to your own style that can then be then used in the other traditional modes of play with the additional defensive or offensive abilities that you have bestowed upon them in Edit Mode.

If you do get bored of that, Dramatic Battle adds a third combatant to the mix and in doing so completely changes the approach required for victory with attacks now coming from all sides. It will unlikely prove anyone’s go-to game mode, but it does provide a pleasant change of pace and certainly works in its own right.

Obviously, the Ad-Hoc versus mode is dependent on being able to find another player, but if you do, the options are immense with traditional and two player Dramatic battles all available to experience with a friend.

Although based on an arcade game released over twelve years ago, it’s amazing just how good Street Fighter Alpha 3 Max still looks. The animations are silky smooth, the characters detailed and unique and the backgrounds, while hardly groundbreaking, are nonetheless very easy on the eye. Needless to say, time has been very good to Alpha 3 – if anything, thanks to the brilliant PSP screen, Street Fighter Alpha 3 has actually never looked better. 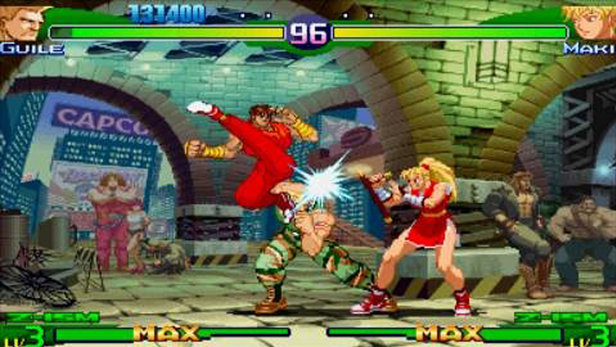 As great as Street Fighter Alpha 3 Max is though (and it is great), your enjoyment will be largely dependent on your willingness to get to grips with the inaccuracy of the PSP d-pad. While not the worst in the world, it’s clearly not the best pad out there and will inevitably lead to some missed moves and a degree of frustration. Things do become easier as you learn to work with its limitations, but I’d be lying if it was anywhere near ideal for the kind of precision required from a game such as this. I personally found the PSP Go’s d-pad a bit more responsive than the 3000’s (which is actually more raised), but neither is perfect and preference will certainly come down to case of personal taste.

Despite issues with the PSP’s d-pad (don’t even bother with the analogue nub), Street Fighter Alpha 3 Max is nonetheless an absolutely fantastic 2D fighter and, in my opinion, still the best fighter you can play while sitting on the bus. The levels of customization are second to none, the amount of content is nothing short of immense and the visuals still look great by today’s standards. It may not be as technically impressive as the recently released Street Fighter IV on 3DS, but as a complete package it’s still the portable fighter to beat.