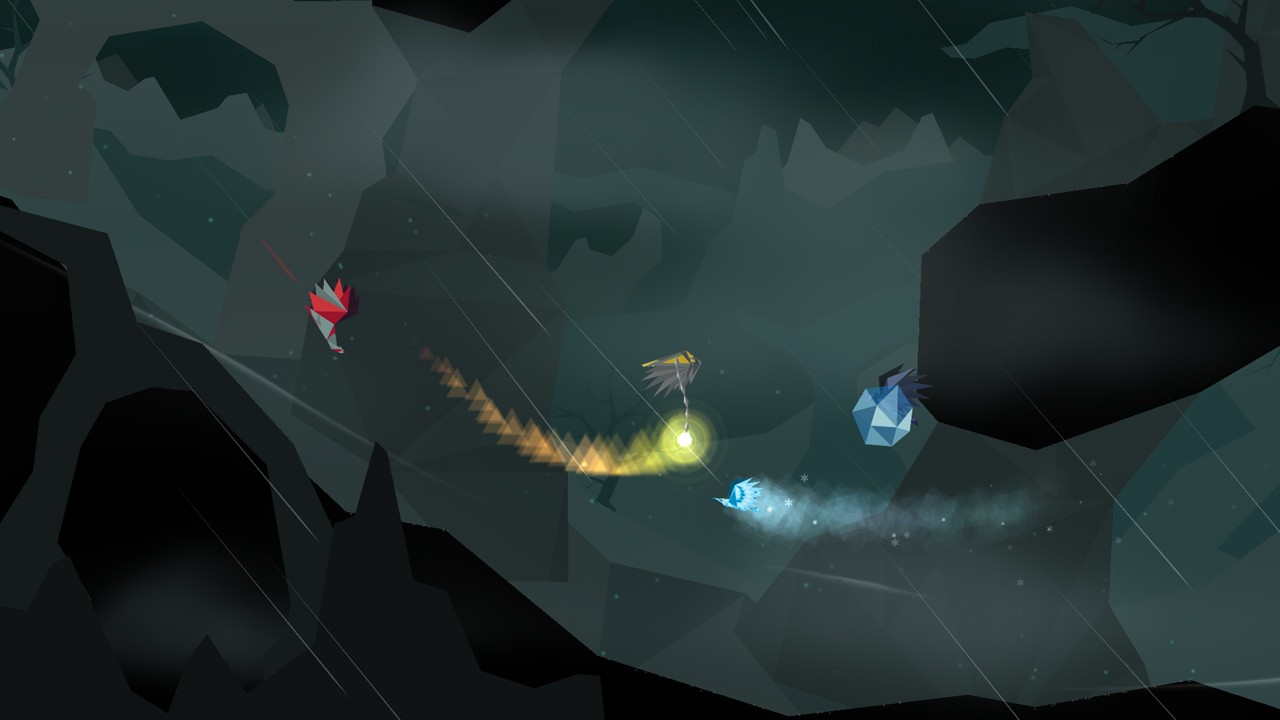 Developed by Broken Rules, Chasing Aurora is a 2D side-scrolling flight experience, reminiscent of Nights Into Dreams which was released on the Sega Saturn back in 1996. Chasing Aurora is a doddle to grasp but difficult to master. You will be a bird soaring through a series of laps, obtaining speed multipliers, and trying to obtain the best score for each level.

Initially, the asymmetrical levels are straight forward and naturally increase with difficulty. The difficulty comes from natural events such as lighting and rockslides, as well as the tighter parameters set. Soaring the skies in Chasing Aurora is a joy and the sudden shifts of direction especially when diving is extremely satisfying. This is a prime example where the core gameplay is excellently designed and feels rewarding, as you can feel yourself getting quicker and sharper with each push for that higher score.

All you need to play are three buttons. The left analogue stick to manoeuvre, ‘A’ to flap your wings for a burst of speed and R to dive. It’s that straight forward. A nice easy pickup and play approach and there’s a tutorial section to freely traverse the skies to get better acquainted to your character’s handling. 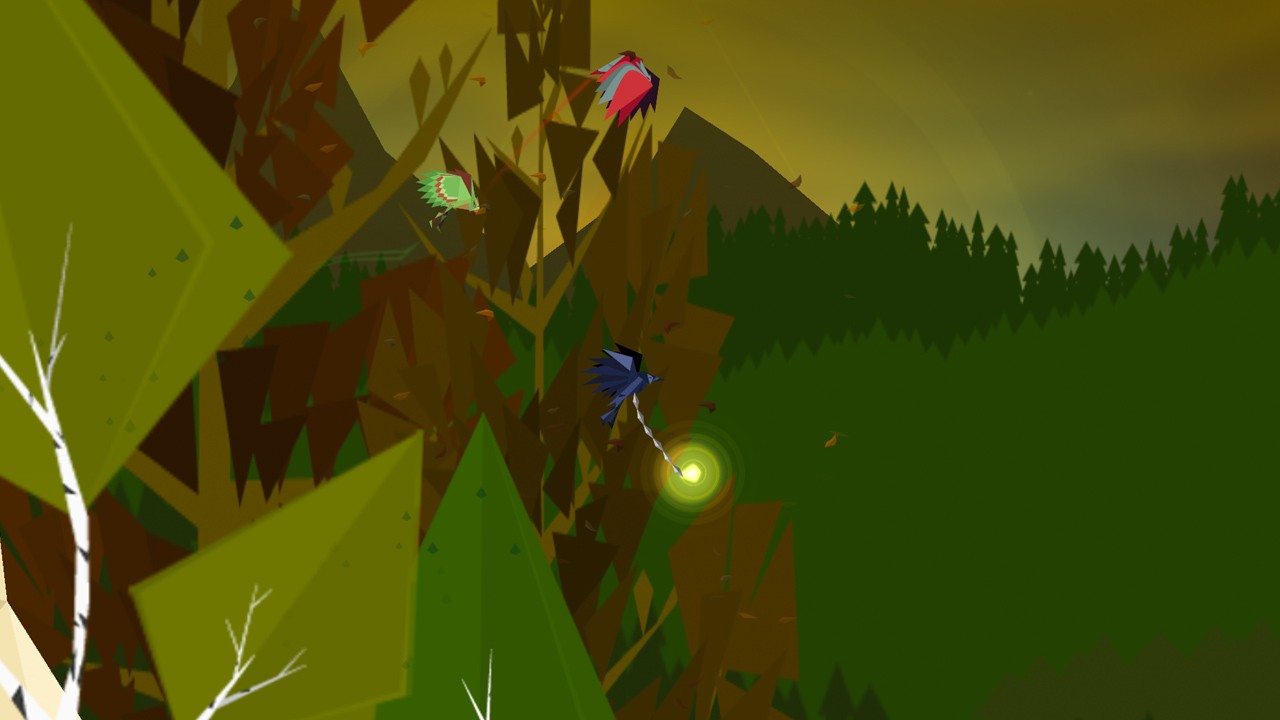 You may be tempted to deviate from the beaten path and this demonstrates the weakest aspect of the game. There is no reward in exploration nor having an improvised detour. Content as a whole is fairly low. These levels are relatively small and involve doing multiple laps. This flight feels as though you should be able to continue on as side-scrollers often involve, yet you’re backtracking through a lap, again and again.

It doesn’t take long until you realise all you’re doing is travelling in circles. That being said, Chasing Aurora is best in small doses rather than a session beyond the realms of 15 or 20 minutes. Unless you’re a person who must obtain the absolute top score, there isn’t enough to keep you stimulated for a substantial amount of time.

That surmises the single-player, multiplayer does offer a more robust experience in comparison, which includes a game of chase that is thoroughly enjoyable. One player captures an orb and the others must pursue and obtain it. There are variations of tag and the single-player feels a bit like a practice mode for the multiplayer side of the table. You and four other players can compete against one another on the local coop. 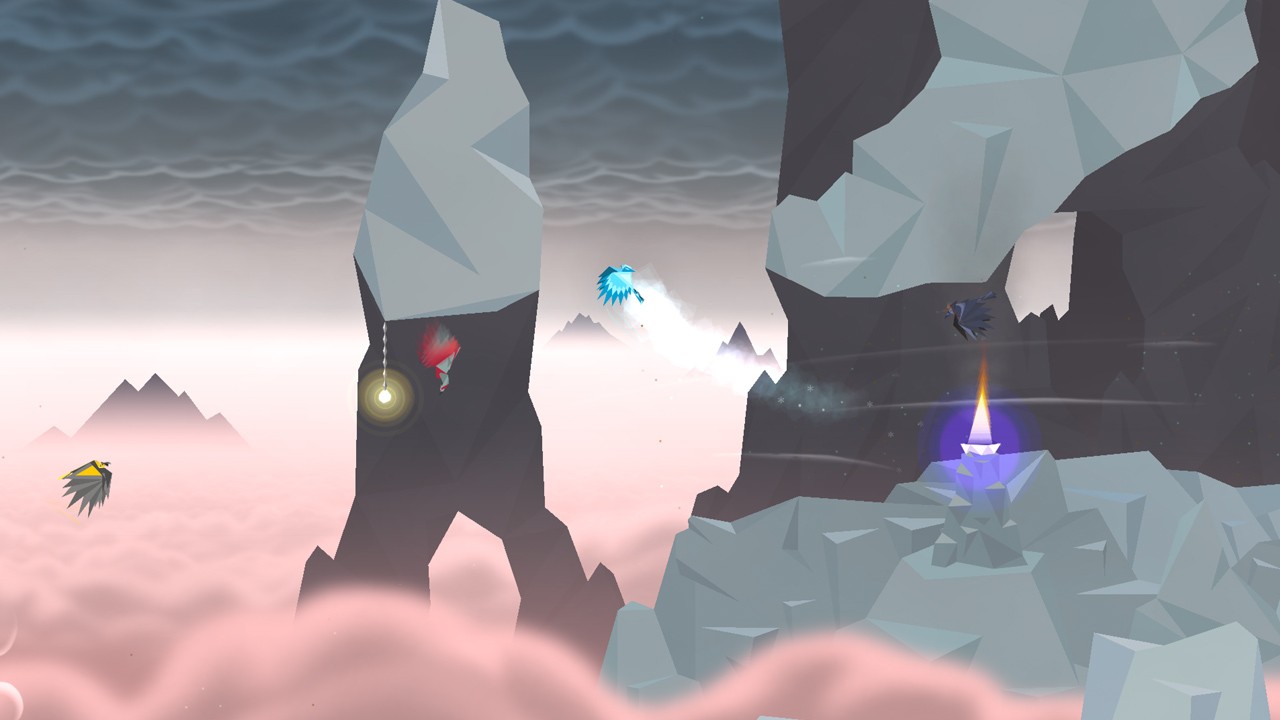 Presentation-wise, the environments are colourful and well designed. You will fly in the day, the night, over green forests and snowy mountains. Although the audio isn’t quite as adventurous, you’ll hear the birds’ movements, level pick-ups, wind, and other environmental sounds. The absence of a traditional soundtrack in a sense helps give this a unique atmosphere that doesn’t detract from the experience. Instead, you feel more immersed as to what’s going on screen without a music score needing to motivate your actions.

At under 100MB, this certainly a low storage game. It is fundamentally fun to play and the couch multiplayer is where most the value is found. You may find the novelty wears off over a short period of time, as it easily gets monotonous, especially on the single-player. That being said, I’ve found myself wanting to dive back in and repeat a similar cycle multiple times.

Chasing Aurora’s fault is condensing what makes it work so well. There’s a hook and once you’ve taken the bait, you feel how shallow the overall scope of the game is. For those who enjoy time-trails, this is definitely a distinct title that warrants your interest, and any local multiplayer enthusiasts that are looking to add a flighty addition to their collection.

For those who enjoy time-trails, this is definitely a distinct title that warrants your interest, and any local multiplayer enthusiasts that are looking to add a flighty addition to their collection.