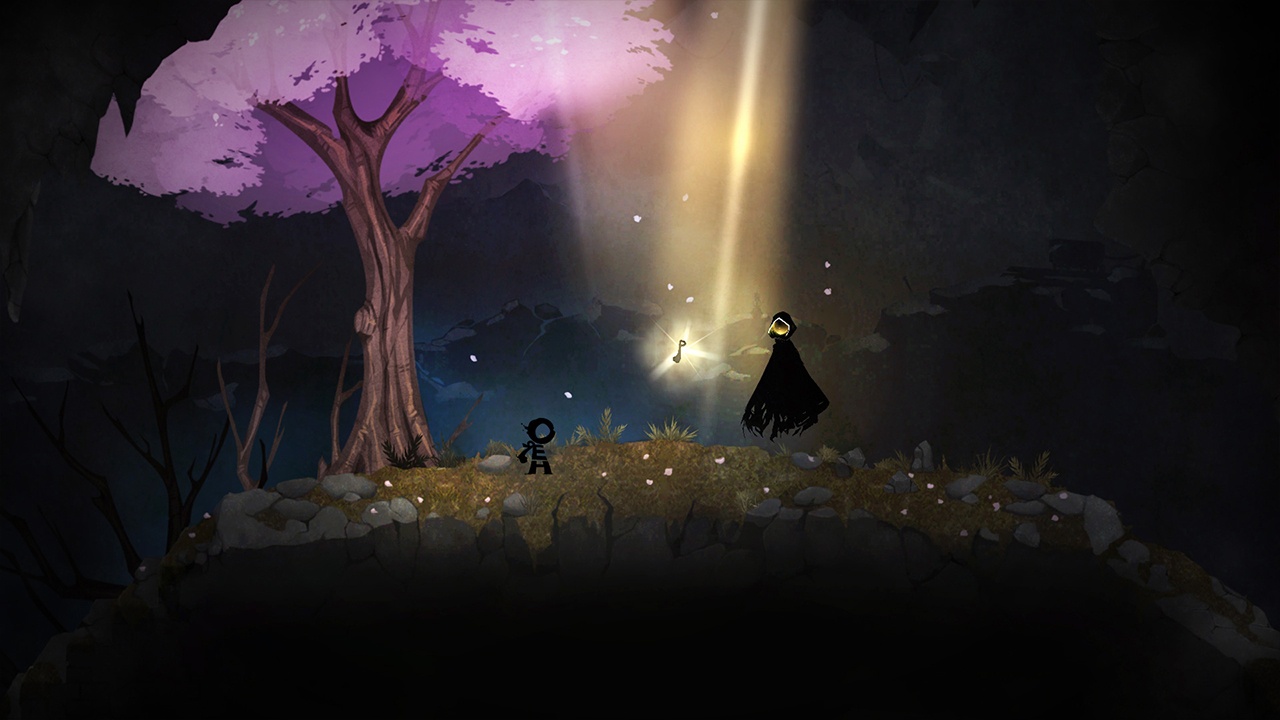 There’s always room for someone to take another view on how to make a good story come to life. For many, we look to dynamic and cinematic RPGs and AAA titles to draw and discover the absolute best portrayal of an artist’s vision for a world inside their mind. However, we’ve also seen the beauty of new ideas that become birthed from even smaller teams. Yacht Club games has reinvented the wheel three times now, bringing us both Shovel Knight’s unique tale and the perspectives of two of his nemeses. Titles like Journey and Monument Valley craft art in ways that players aren’t always expecting and then get caught completely offguard by. But, in the end, it’s the power of the written word, of language itself, that does all the heavy lifting in storytelling. And, for Brainseed Factory, they decided to let words do all the work themselves.

Typoman is a adventure word game, and that’s a strange place to start, but here we are. There is a world that is dark, horrid and full of broken words and letters. Suddenly, one day, a HERO arises from the muck and dank, and does only what a hero can: tries to make the world a better place. Moving forward, HERO understands there is something standing against him, but it’s hard to put a proper name on it: sometimes it’s HATE, sometimes it’s FEAR, but, in any case, it’s out to stop him cold and not let him experience what LIFE could truly be. It’s convoluted to try and fully appreciate what’s happening, but the idea is you are the literal representation of a HERO, so start acting like it. 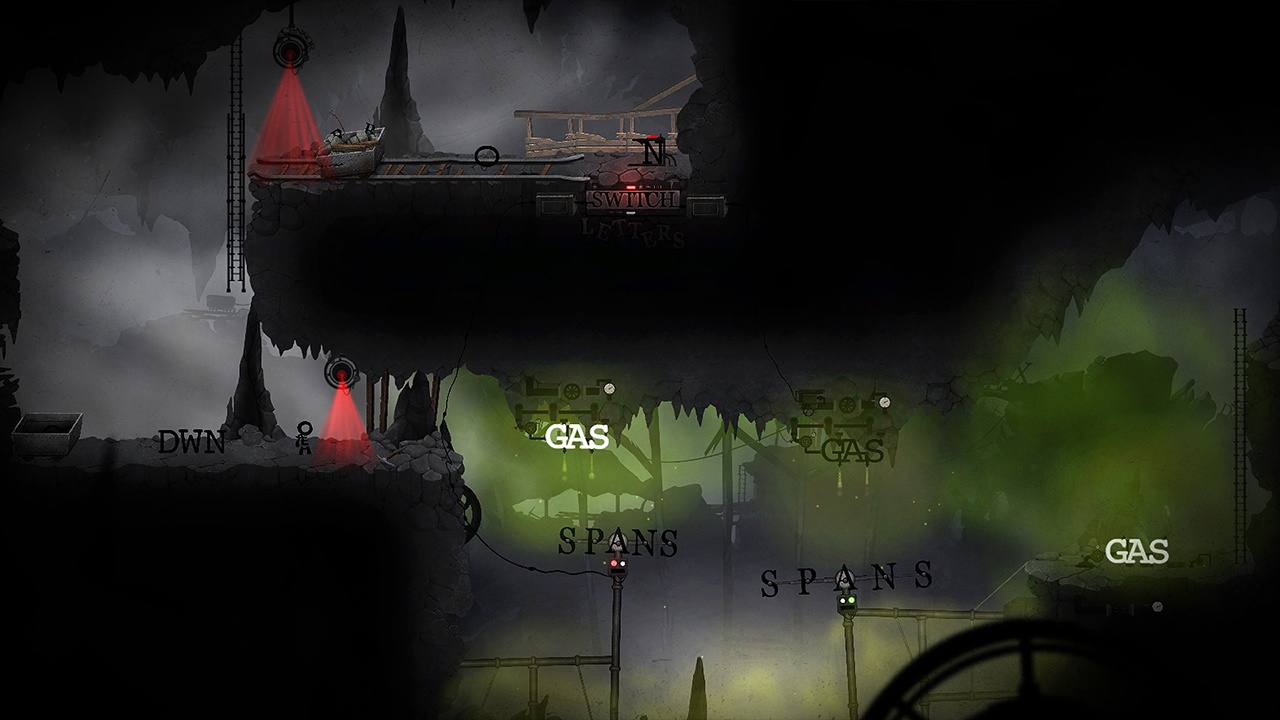 Typoman stands out in a truly unique fashion because of what’s required of the player in order to proceed. As there is a reliance on wordplay (which we’ll talk about in a moment), you can’t simply dismiss the linguistics of the game and, in fact, failure to think outside the box with words will result in immediate stoppage from progressing anywhere. On the other hand, this is hardly a gritty version of Scrabble: there’s a lot of running, jumping, well-timed swings and basically races against the clock that will kill you dead if you’re not tuned up enough to actually play a game. I say this not to shame or demean other word games, but, with titles like Spellspire and Letter Quest, the focus is 90% on being able to make words in a jiffy and 10% on doing any sort of “gaming.” Typoman really needs players to balance an even 50/50 in order to make it anywhere, which automatically puts it into a league of its own. Imagine if Super Metroid made you do long division when you were attempting to shoot down various enemies. It would be a totally different experience.

Typoman’s approach to spelling is certainly important, because it’s very targeted and specific in order to make the game progress. While certain other spelling games simply ask you to create the biggest, most extravagant words possible, Typoman is looking for a very specific word every time, or at least a synonym that you can make with the same limited word pool. A great example is an early gate that needs to be moved, and you can either make the word RISE or UP from the same set of letters you find in a pile. Additionally, sometimes spelling one word will give the appearance of a new letter or letters that, in conjunction with existing letters, will help you out of a tight spot. This approach to the mechanic is what makes the game sparkle: not everything is as it seems, and it can change rather quickly. Additionally, there are lasers and such around to prevent letters from being tediously carried between areas in an attempt to game the system. Sure, having a spare O or D wherever you went would certainly make some things move faster, but the game isn’t going to let you get away with it that easily.

But the tricky and specific spelling is also sometimes the game’s downfall. An early trap involves needing to run through a field of GAS without choking to death, and players will probably murder themselves five times over before figuring out the solution, which is carrying a spare P so you can GASP for air every so often. It’s clever, but it’s not something that most players would automatically consider. In another situation, you need to turn a platform ON so that it extends over a gap, but then you need to remove the O so that it stops moving and you can cross at the right moment. An ambitious player would probably think they could time it right and clear the divide without slowing down. They’d be wrong. 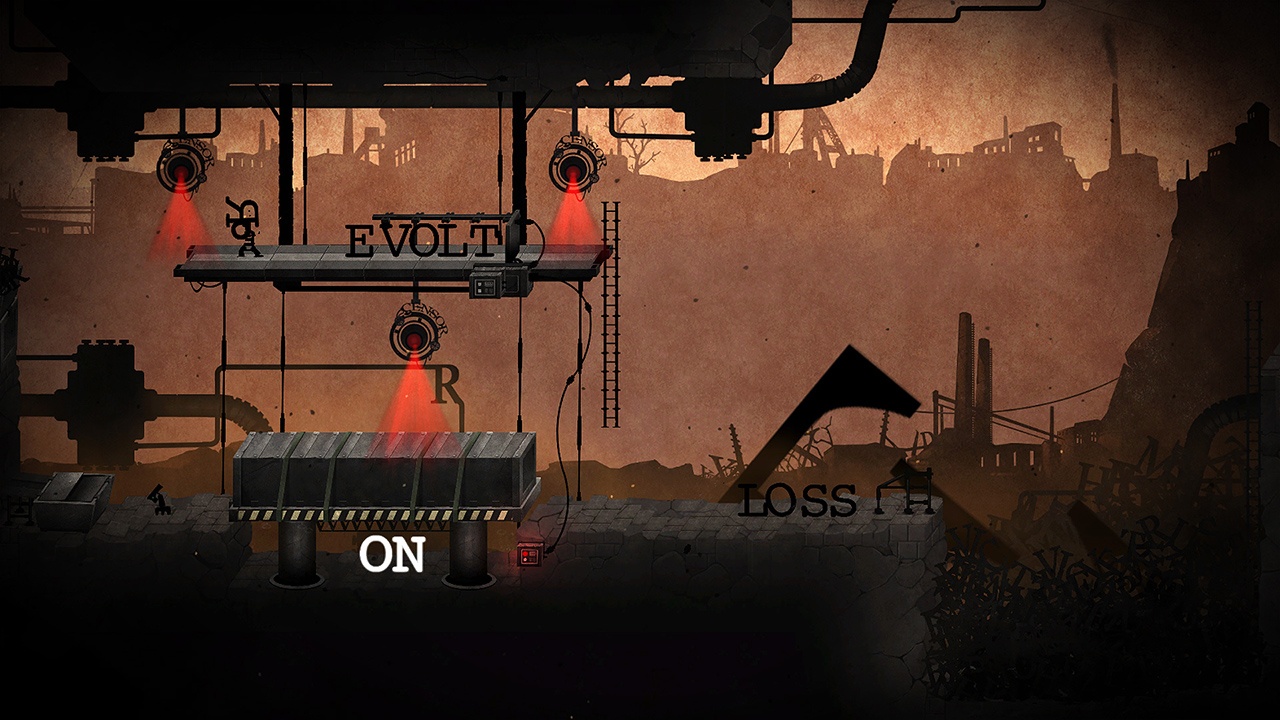 And this is what I mean when I speak about charting new territory and doing something bold and innovative. This is a hybrid title that demands players exercise both halves of their brains at the same time. You need to think like an athlete and a scholar in order to make it to the end, and there’s a fair bit of critical thinking and problem solving mixed in. Not to mention that there is this plotline that follows throughout that’s mostly subjective in understanding: our protagonist is literally the word HERO that’s been constructed in a poseable manner. There’s moments of exposition that come from hidden quotation marks that help better lay out the story, but most of them feel very “inspirational quote” in their delivery and timing, more about giving something vague but positive instead of solid narration. On the one hand, it works well with how the game is positioning itself, but, on the other, it’s frustrating for anyone who’d like to understand this incredibly short journey beyond the surface impact.

All in all, Typoman is an incredibly novel and inventive title, and it has a certain audience to draw it in, specifically those who are looking for something new, something fascinating and certainly different. There’s real moments of brilliance that shine through the dark and hopeless atmosphere, and I would love to see more from Brainseed Factory in this facet. But it is a one-way experience: after you’ve played it, there’s very little to bring a player back for a second round. The minigames that unlock afterwards do generate more replay, but those feel like afterthoughts to keep the wordplay fresh, not necessarily adding to the original storyline. If your gut tells you that word games are your wheelhouse, then dive in and give Typoman a run, because it’s definitely worth the price of admission. But, if you’re more adventure than academia, you may want to pass this one by.