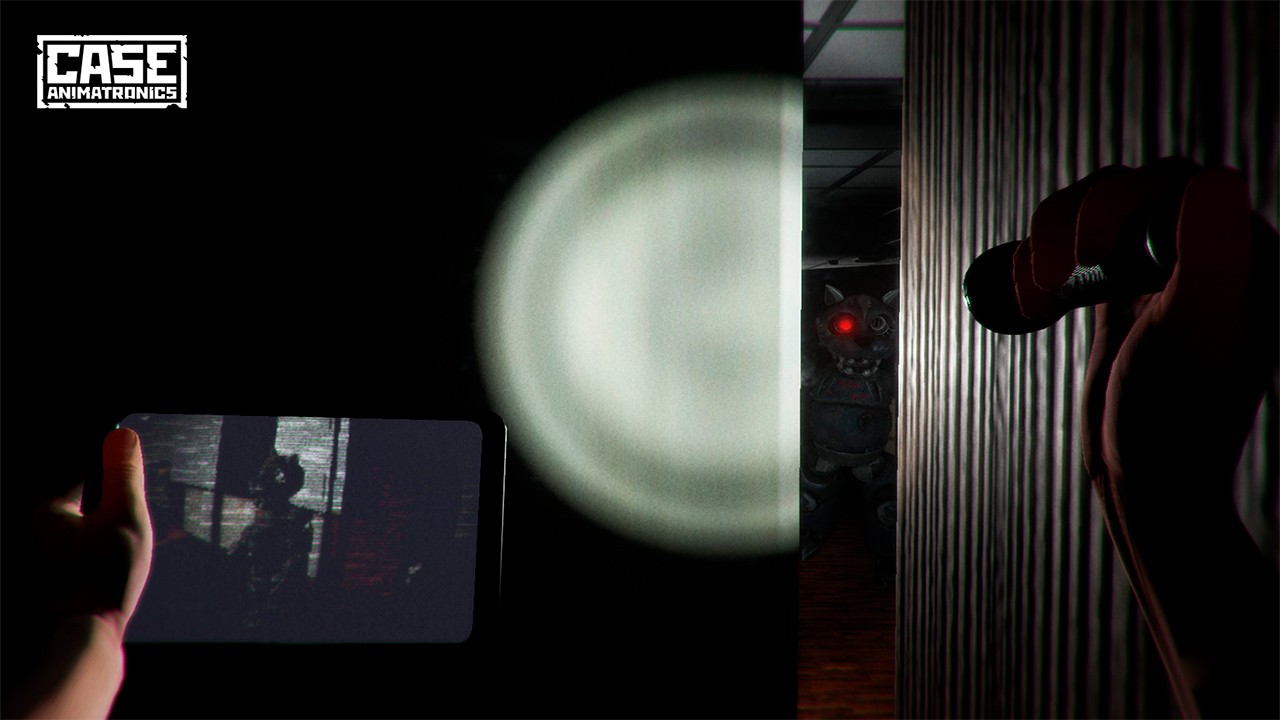 The impact that Five Nights at Freddy’s made on the gaming world cannot be understated. While they weren’t the most polished or fleshed out horror experiences, they were at least inventive enough to spawn a wave of reactionary streamers that marketed the game to wider audiences. Following its tremendous success, there would be an inevitable wave of copycats in the horror genre, all trying to replicate Five Nights at Freddy’s success to varying results. CASE: Animatronics from developers Aleson and Last Level is one such title that aimed to capitalize on the popularity of the franchise. But did it fall on the side of inspired or pale imitation?

CASE: Animatronics puts players in the shoes of John Bishop (or as the game likes to lovingly call him, “Main character”), a detective working a late shift in an empty police department. He’s suddenly contacted by an anonymous hacker who makes his life a living hell by manipulating the department and its “evidence” of creepy animatronics littered around the station. Bishop must navigate the gloomy corridors of the deserted station in search of various items to help him escape the lockdown, all the while avoiding the hacked animal animatronics that have come to life and are being controlled by the hacker. Mostly, CASE: Animatronics at least tries to differentiate itself from Five Nights at Freddy’s by presenting a clear motive and antagonist, but it merely serves as a narrative framework to get you from one scary moment to the next. It works, but you won’t pay much attention to it when you’re running down a hallway screaming your lungs out. 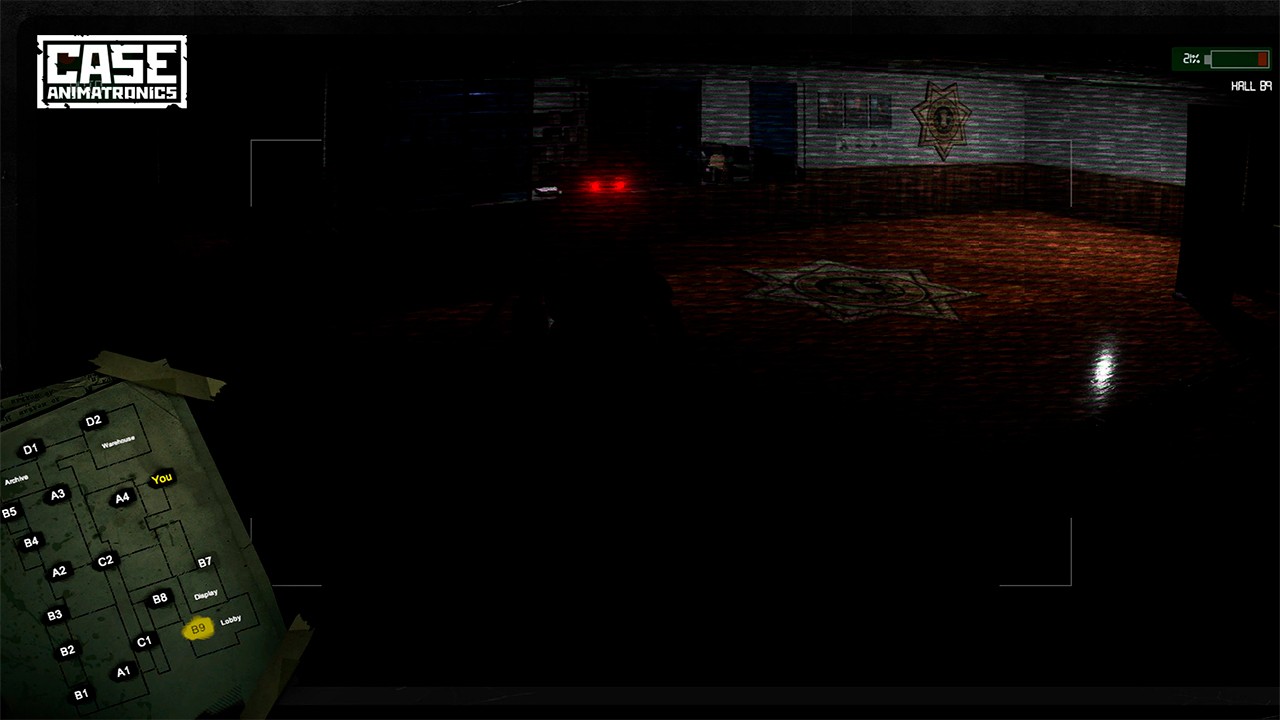 Speaking of features that differentiate CASE: Animatronics from its aforementioned inspiration, players can actually freely move around the environment while exploring the dark corridors of the station in first-person. It does fondly remind me of Slender: The Arrival at times (it even has the protagonist scurrying around the environment searching for notes), but the level design of the police station is well-thought out and instantly memorable from a couple of trips around the building. It makes backtracking (which you do a lot) much easier and without relying too much on your map. It’s a welcomed example of pretty good level design, mixed with a strong, palpable atmosphere of dread backed by instances of really terrific sound design.

Your goal as Bishop is to ultimately understand the mystery surrounding this hacker and escape the confines of the station intact. The animatronics, clearly inspired by the iconic designs of Freddy and his crew, are terrifying, but far too familiar to leave a lasting impact. In fact, they just seemed like less colourful and skinned versions of Five Nights at Freddy’s. Some originality in their design would’ve been appreciated, but it only served as a distraction. At some point in CASE: Animatronics, the animatronics themselves become less scary and more like unnecessary obstacles blocking you from finishing fairly simple and mundane tasks. The initial confrontation with the animatronics as they menacingly patrolled the station kept me on edge, but only for so long before I started racing towards the end of the story.

Unfortunately, CASE: Animatronics isn’t a very long game. If you follow the procedure and map the layout of the station, you’ll be able to dart around and complete most objectives in less than three hours. At the same time, for the kind of game that it is, this felt like the perfect length too. It can feel a bit tedious towards the end of the game when you’re still fumbling around in the dark looking for the hundredth fuse box or item, but the thrill and joy of the experience is best served in short doses where it’s allowed to deliver one jump scare after the next in quick succession without feeling like a grind. The variety in animatronics also keeps the pace and tension high as each animal has distinctive qualities, whether they’re faster and more agile, or slower, but take the time to scan the environments and pick out your hiding spots. 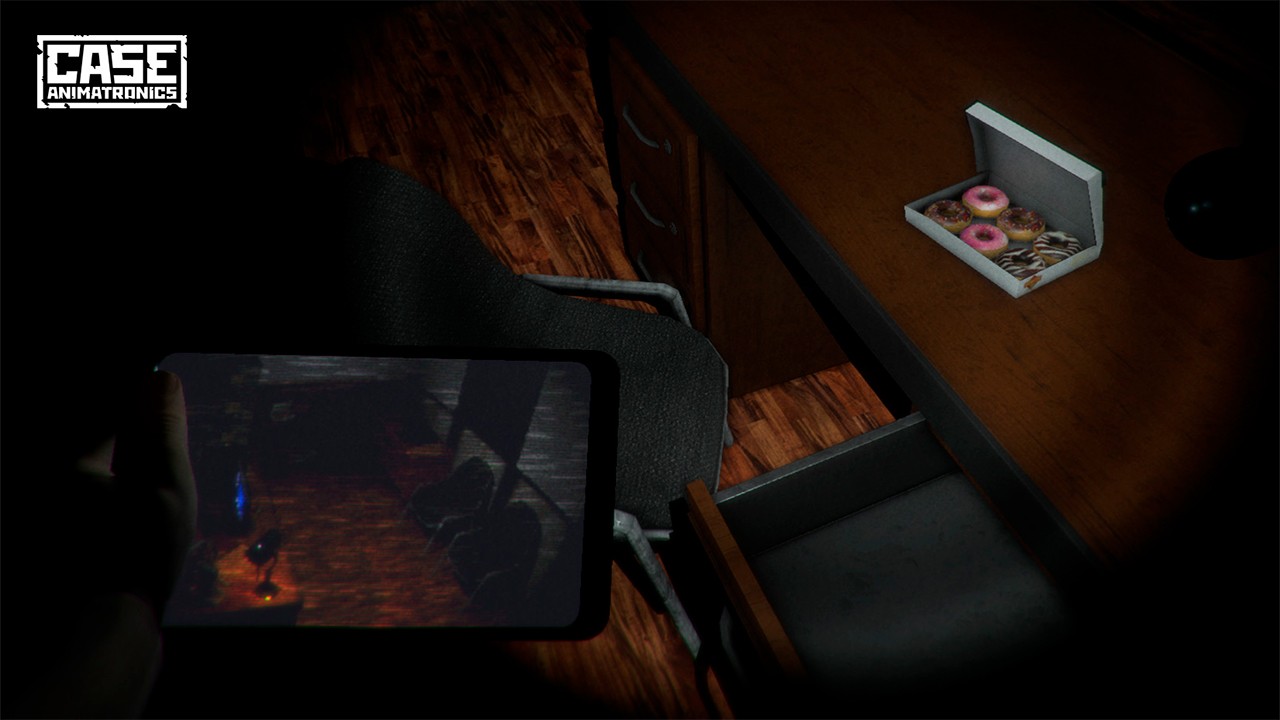 Where CASE: Animatronics really lacks quality is in its voice acting and writing. The script actually has a few tongue-in-cheek moments where it clearly spells out what’s happening, sort of breaking the fourth wall while poking fun at games like Five Nights at Freddy’s and Slender. I just wish it maintained its satire, because it could’ve been something special had it been a potential dissection of the sub-genre. Instead, it presents moments of meta-humour, lost in a sea of repeated trappings and shortcomings that were criticized in similar games: collect a certain amount of items, find a fuse box to restore power, find the key to this locked door, etc. This isn’t helped by some really cheesy voice acting – I honestly couldn’t tell if they were being serious or not. It drained the tension sometimes, and I just wish it knew when to be a comedy, and when to be an all-out horror.

Overall, CASE: Animatronics isn’t bad by any stretch of the imagination. I can see what they were going for, and sometimes, it actually worked effectively well. The few instances of meta-humour were solid and actually provided well-earned laughs, while the moments of heightened tension were decent enough to keep your heart racing. Sadly, there’s just way too many similarities to Five Nights at Freddy’s, to the point where it became a constant distraction. If Aleson and Last Level didn’t try to replicate the iconic designs of Freddy Fazbear and his crew, it would’ve scored a lot more originality points. For now, it’s a serviceable horror that presents a few interesting and inventive ideas, but never realizes them to their fullest potential.