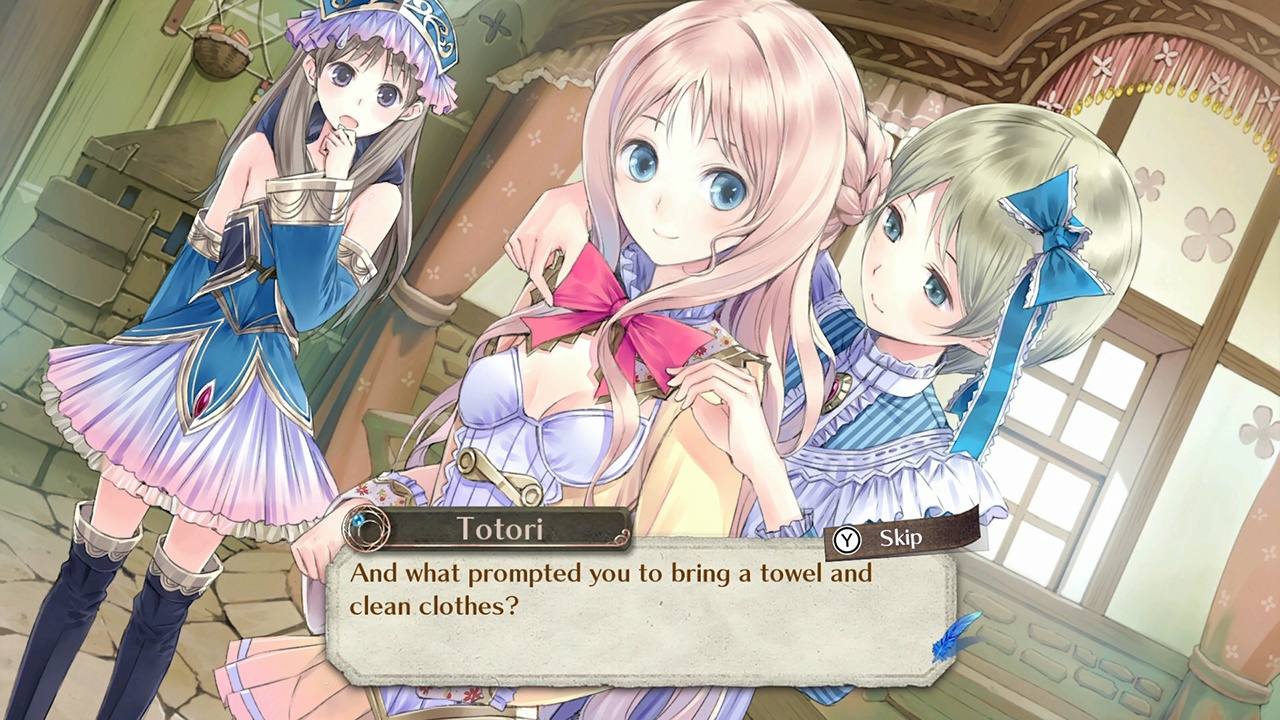 T.S. Eliot really captured the moment of disappointment that could come with the apocalypse in his memorable poem, The Hollow Men: “This is the way the world ends/Not with a bang but a whimper.” We all imagine the climax of some fantastic story to be a culmination of everything that came before it and it all going supernova in a beautiful, terrifying sort of action. But the truth remains is that many things end on a low note. For every great series finale, there’s a show that gets canceled with no warning or a lukewarm, confusing “open ended” conclusion. Not everything can end on a high note. And, as Gust was acquired by Koei Tecmo and got folded into their catalog, their very last publication for Arland, Atelier Meruru: The Apprentice of Arland DX, ended the series with a distinct “meh.”

On paper, it’s a fantastic idea. You’ve got Meruru, the most three-dimensional of the alchemists so far, with a story and guideline that we can all identify with. She’s the princess of this tiny kingdom that’s totally devoid of technology or alchemy. The king is planning to let his fiefdom be absorbed into the greater Arland kingdom, so there’s sort of this tension and anticipation there, but that’s not the main focus. Meruru wants to be an atelier as well, and her father initially forbids it because she needs to get her princessing in order. After a talk with Totori (who is Meruru’s master), the royal consult decides that Meruru can pursue alchemy on the condition that she uses her skills to make the kingdom better and basically a more appealing target for assimilation. And Meruru is far from alone: she gets assigned a bodyguard, Lias, who is equal parts friend and servant, and we are soon aided by Rorona, from the first game, who has been turned back into a child thanks to a potion of youth from Astrid; who still continues with rage.

Atelier Meruru presents in a position of absolute potential for success. You’ve had two games to work the kinks out and make things more appealing, and most of the great elements get baked straight in. You have the ability to fast travel to areas, but you start by walking so you can see the depth and detail of things, and learn to appreciate the bamfing. The landscape and number of places that Meruru ends up visiting has the variety of Totori’s adventure, but you spend plenty of time in your home unit, like Rorona did, to understand more about character development. There’s plenty in terms of great discoveries of recipes, a wide range of weapons, armor and other to craft, and some of the cutest monsters that you have seen to date. You started Rorona with a slime, and you got a furry little monster in Totori, and you straight up fight a rabbit with a carrot sword to kick off this tale. Hell, even the combat seems more fluid, having streamlined the way that you move between active and defending moments in a natural and robust fashion. The chaining and combos that come along with proper escort selection also make for some incredibly “stompy” moments, some of the only ones in the series where I felt overpowered in a pleasant way. 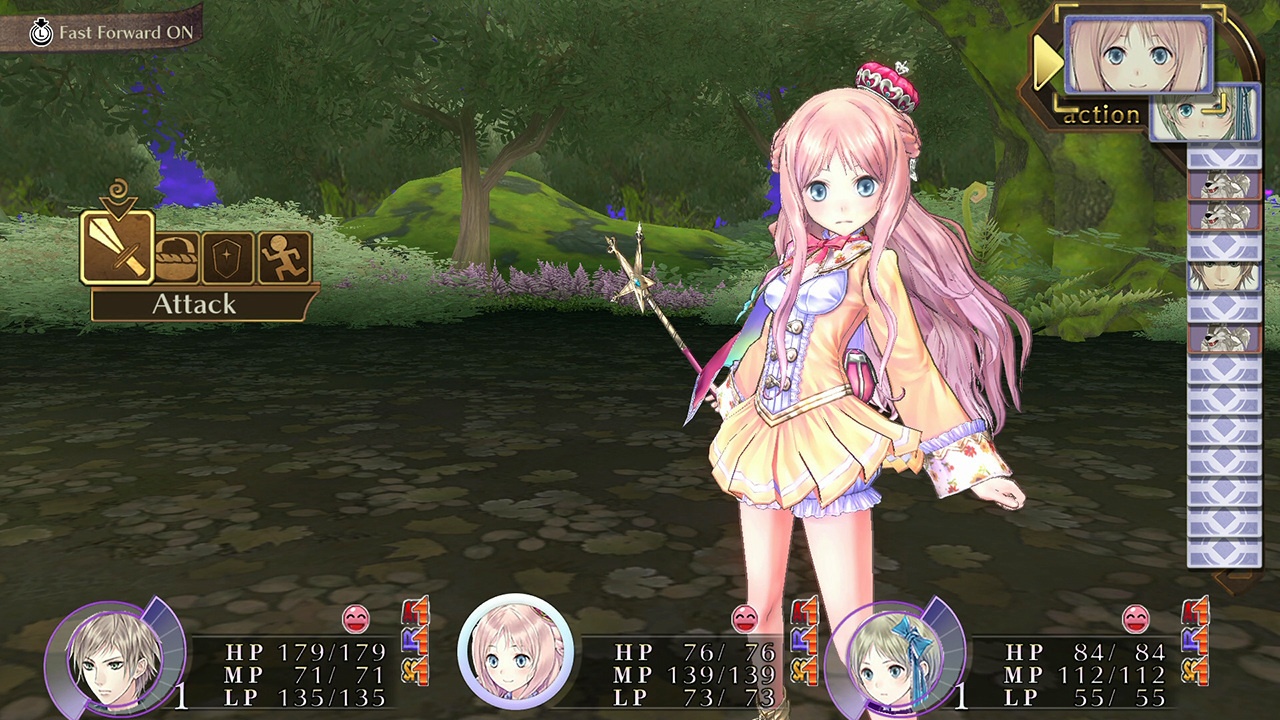 Additionally, Atelier Meruru has plenty of moments that play out like a greatest hits CD. You obviously have the aforementioned characters, but you encounter even more moments from the past, seeing people who’ve touched the lives of Arland’s finest over the course of three games. Sterk and Etsy both make re-appearances, changed in some aspects but really more of the same in others. The musical score, though fully original and driving, makes a bit of homage to everything that came before it, doing almost a stylized pastiche of the songs from previous boss fights and overworld orchestras. Even the opening song, which stands on its own as a solid OP and really gets you into the moment, was performed by the same person who did Atelier Totori’s opening, so you get this full circle moment. This is the Deathly Hallows of the Arland series: you can appreciate it as a standalone work, but you really, truly want to play the previous games in order to get all the winks, nods and straight up callbacks that come throughout the game.

However, as you watch that opening scene, you realize that it’s not an animated cutscene, but just music put over some targeted in-game footage. Which is really weird: the last two titles have had some beautiful anime that were concocted just for the startup. It’s like a corner was cut somewhere, and it doesn’t just stop there. The graphics of the landscape, which dramatically improved from Rorona to Totori, feel like they’ve just plateaued, and, in a couple of small places, dipped in quality. As the high of loading up a new adventure starts to wear off, you see small cracks in the facade. The largest jag of all is the return of the impending doom countdown system: from the very beginning, you’re under another timer gun, and I feel like that has to be due to fan response demanding a reason to keep playing other than good dialogue and cute heroines. Why would people want this?? It’s honestly the worst part of the series, and I get that it’s a crux to make sure people don’t meander and turn this into anime Terraria or whatever, but c’mon. I like focusing on this being Princess Maker with spells without also needing to feel like I’m taking a standardised princess test. 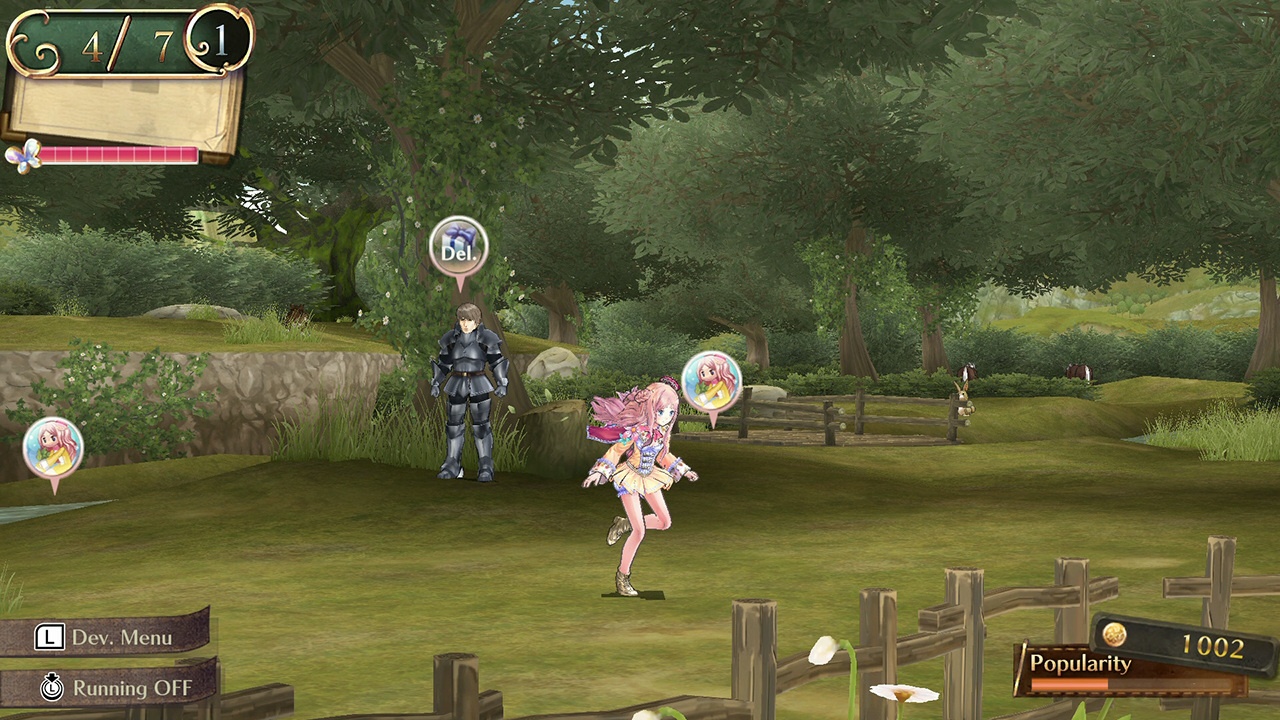 As another point of order, the fun of simply working to become a princess loses its luster after the first eight hours or so. It dawns on you that Atelier Meruru has done a good job of distracting you from actual drive or motive by interjecting characters at the right moments, or having something a tad tongue-in-cheek occur to draw your attention. I seriously can’t understand how every single game has DLC that puts the main character in a bikini for the duration of the game, but if that’s what you consider safe attire for mixing caustic chemicals, more power to you. But no, after a bit, you realize there isn’t anything else really being brought into the fray to make things more challenging or dramatic. Rorona had plenty of interposing challenges and genuine difficulty in making sure she wasn’t about to become a displaced ward of Astrid. Totori was driven by a familial quest to make things right and to prove to herself that love crosses any borders. Merruru, though I really feel for her, never had the same caveat of looming doom: worst case scenario, she wasn’t allowed to be an alchemist anymore, and she’d still be the princess, and, eventually, queen. It’s like trying really hard to get a salary increase to a million dollars a year from your pithy five hundred thousand a year: if you miss, you’re not exactly destitute.

In the end, though, Atelier Meruru: The Apprentice of Arland DX still offers up a mostly satisfactory ending to the entire story and the trilogy in general. The multiple potential endings with early branch selections bakes in a ton of replay value for those determined to earn the finales and not simply look them up online. The extras available here are the perfect all-encompassing package, offering music, art and other goodies to glance at that represent Meruru’s quest as well as the previous games. And, repetitive though it may be, this does the most justice to the Arland Atelier series as a whole concept. It’s cuite, it’s easy to learn, it carries the same effects as the previous games, it looks good enough and sounds good enough, and it wraps everything up in a concise package for those who’ve stuck out the whole trilogy. I’m glad I took the journey, but, sadly, I doubt I’ll be coming back this way again anytime soon.

The end of the Arland saga runs in circles, delivering more of the same from the previous titles but without anything to really get you excited.