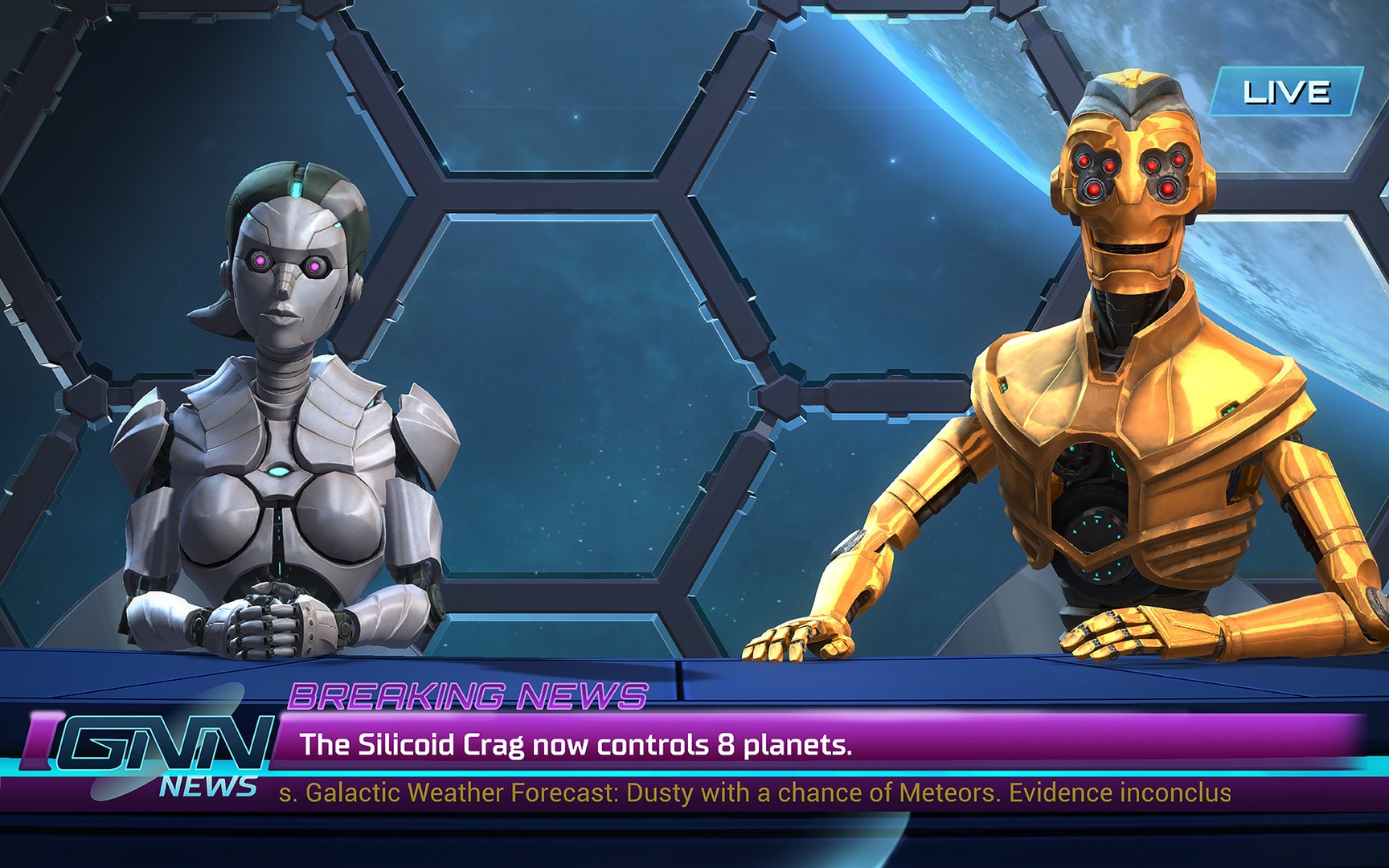 Released in 1993, Master of Orion took one look at Civilization and thought that wasn’t enough, jetting off into deep space in search of new frontiers. Going boldy to where no-one has gone before was just the beginning, as original creators SimTex developed a four pronged gameplay attack based upon exploration, expansion exploitiation and extermination in order to become supreme ruler of an infinite number of galaxies. A revolutionary title in it’s own right, Master of Orion went on to spawn two sequels, as well as countless imitators built upon the popular gameplay template it established.

The rights to the series are now in the capable hands of WarGaming.Net, who have sought to bring the pioneer of the 4X genre into the twenty-first century. As a polished update on an all-time classic, the game captures the spirit of the original all while giving it the necessary comsetic necessities to survive in a market already packed out with competant, enjoyable strategy games. But is there really enough room in the universe for Master of Orion to restablish itself as the quintessential turn-based space sim?

Once the game begins, you’ll have five hundred turns to flex your political, technological, and militaristic might in a race to become the most dominant species in the galaxy. Victory can be achieved in a number of ways, each with their own specific set of parameters that need to played before you can even be crowned ruler of the galaxy. A political win, for example, will require you to be voted in as the leader of an intergalactic democracy, which won’t become available unless you’ve discovered every rival civilization and have the necessary buildings in place. Meanwhile a military victory requires you to have the most dominant fleet at your disposal, forcing others to bend to your will as they cower in fear.

Starting off with just one colony and a handful of ships at your disposal, the opening hundred turns of the game reinforce everything that made the original game so great. A sense of wonder spurs you on as venture into the unknown, looking for new planets to establish bases and making first contact with neighbouring alien races that will either become your new best friends or your worst enemies. Racing for resources, strategic vantage points and cornering warp corridors becomes your primary objective, long before you look at the bigger picture. 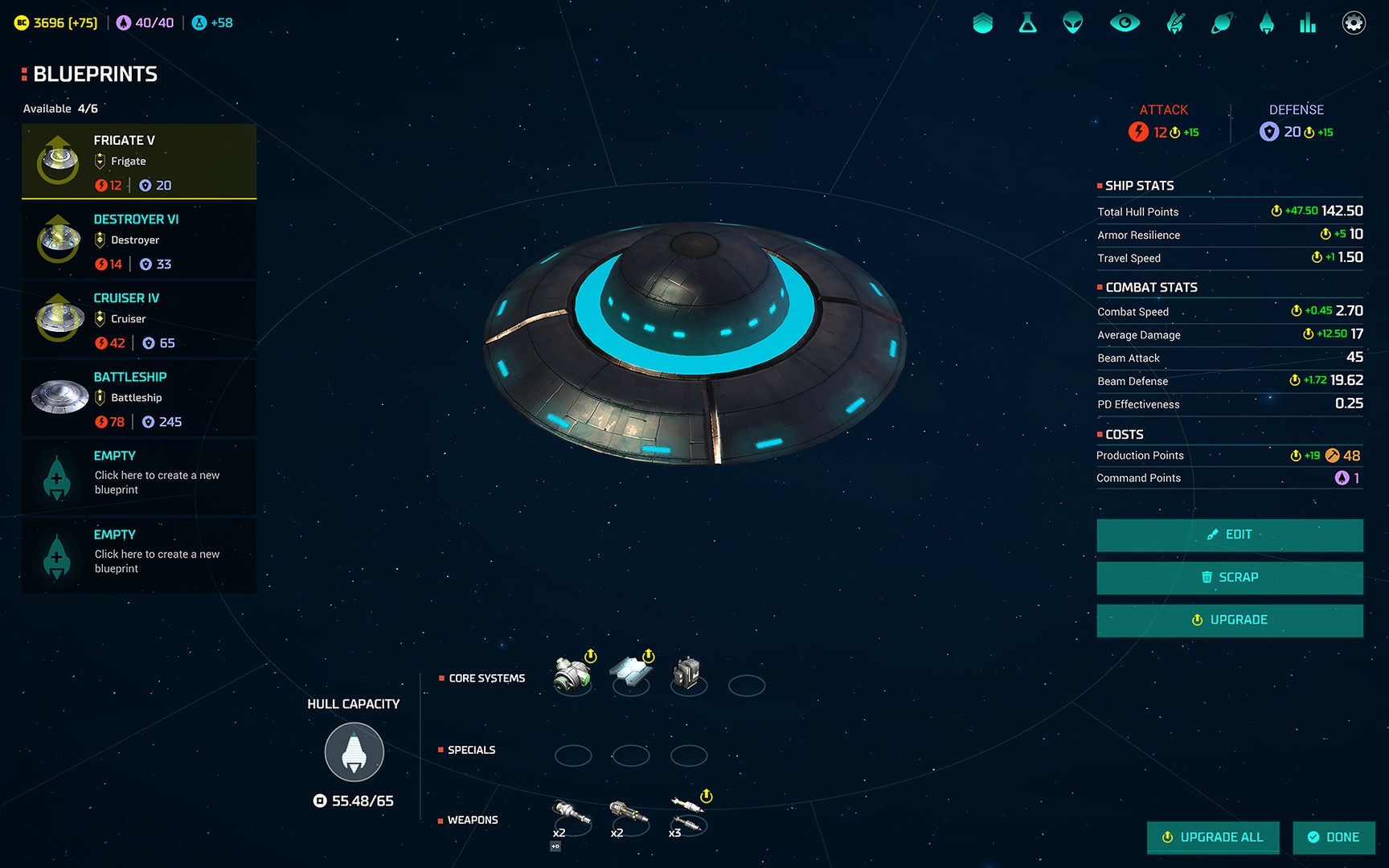 The cracks start to appear once you get stuck in to the nitty gritty of micro-managing colonies and shifting focus towards achieving victory. A monotonous regime of researching, building and diplomacy make up the crux of your actions every turn and it all begins to feel a bit samey. Balancing the books becomes priority no matter which race you choose from, which just goes to show that deep down, Master of Orion lacks the one thing that really needed to set itself apart – variety.

There are ten races to choose from, each neatly fitting in to traditional ideological archetypes, ranging from the warmongering Bulrathi to the intellectually gifted Psilons, with the pH neutral humans sitting dead centre on the spectrum. Each species comes equipped with a number of exclusive traits and bonuses that will steer in the direction of potential victory paths, should you decide to play to their strengths. But beyond a handful of exclusive traits and bonuses and the obvious cosmetic differences, there’s very little to distinguish one race from the other. Tech trees, ship blueprints, and pretty much every other aspect of your growing empire looks the same, no matter who you decide to champion on.

Even the maps, which range in size and shape depending on your choices in the pre-game menus lack variety and depth. The star charts are nice to look at and there’s no denying that this is the best looking Master of Orion game, but once you’ve figured out the best approach to colonization and harvesting resources, then a rinse-repeat formula can be adopted in to virtually any game you play, regardless of the map generated at the start of the game. Even the presence of space pirates or alien entities feels scripted, and lacks the potential intrigue and surprise that we’ve seen in recent rival sims such as Stellaris. The promise of discovering brave new worlds is fulfilled rather early, meaning that for the rest of the game, you’ll stumble upon the same handful of planet types for the rest of the game.

One bold new addition to the Master of Orion template is the option to participate in real-time space battles. Inspired by the Total War series, players can turn the depths of deep space into futuristic battlegrounds in which the survival of you species can be won or lost in just a few minutes. It’s a welcome break from the day-to-day political and economical gameplay, but despite the inclusion of cinematic angles and some limited strategic options, each of these battles fall rather flat. As you’d expect, the side with the biggest, most powerful fleet will win, giving little opportunity to invent awe-inspiring tactics on the fly or create truly memorable dog fights that would give Star Trek a run for it’s money. 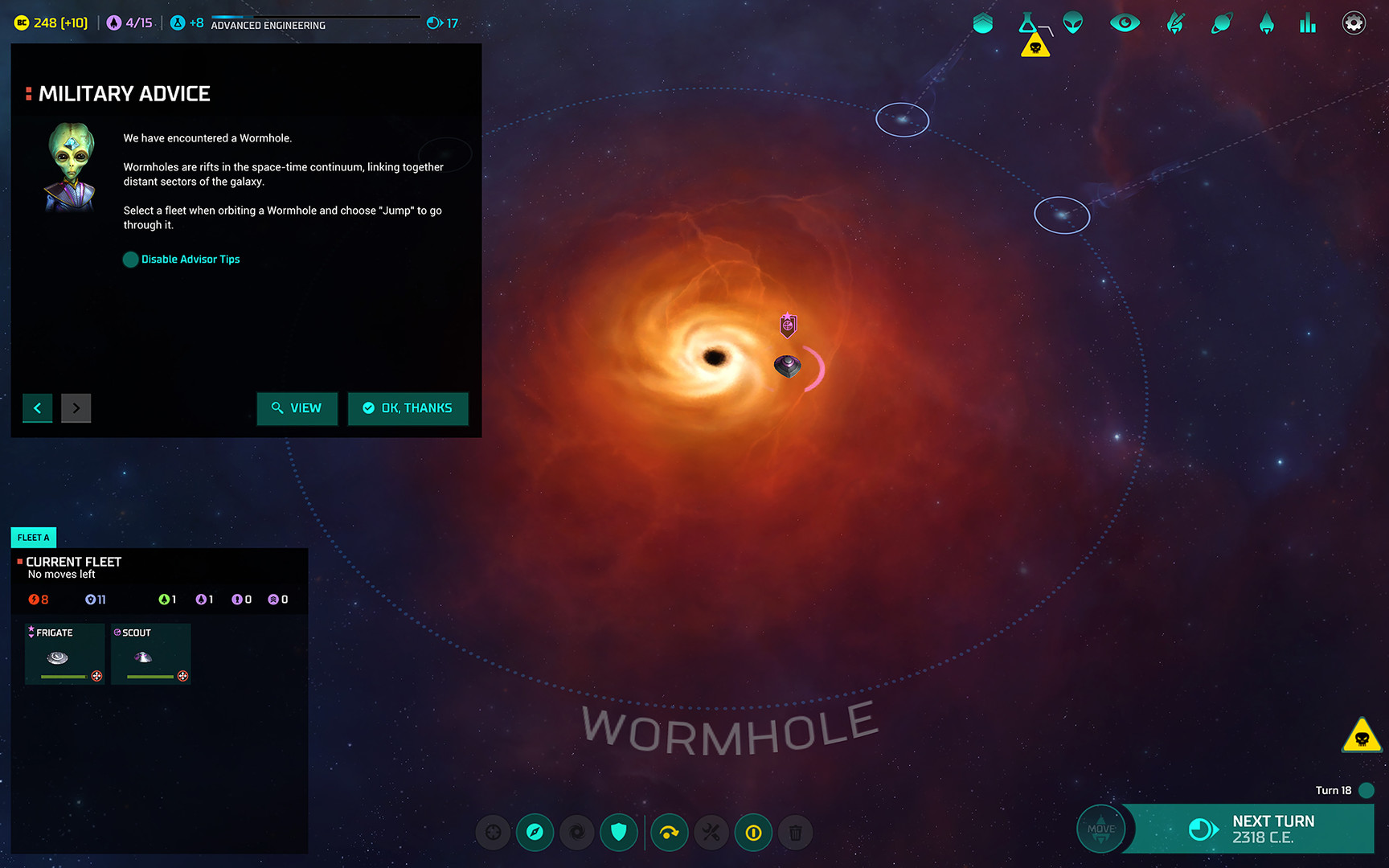 The problem is that the AI on both sides feels rather stiff, with most battles resulting in a mad game of chicken, as enemies flights charge at one another with the first to blink generally falling on the losing side. While Total War always used terrain and locale to it’s advantage, Master of Orion ignores nearby planets and asteroids, instead choosing for all battles to take place in what is rejigged version of the same abyssal map time and time again. It’s all a little bland and perhaps the only incentive towards choosing to go down the real-time route as opposed to taking the auto-resolve option is that the latter can often see your forces diminished over what is essentially a weighted coin flip.

Another great addition to the series is the beefed up espionage system that can allow you to infiltrate the ranks of alien civilisations and partake in a series of underhanded schemes. Collecting data, stealing tech and destablizing entire governments are just some of the options available, all designed to carefully weaken enemy colonies before you swoop in with your fleet and take over. But while this too adds another string to your bow, it begins to lose appeal rather quickly. Spies are trained automatically so if one fails in their mission, then you’ll have a whole bunch of potential secret agents waiting in the wings to give it another go. There’s no sense of danger, which as well all know from Bond films, is a key part of living the secret agent lifestyle.

Your actions throughout the game will eventually trigger the need for a diplomatic engagement with a rival race. These sit-down talks inject some much needed colour and personality in to the darkness of deep space. Voiced by various sci-fi alumni such as Michael Dorn, Mark Hamill and Alan Tudykk, each race is represented by a character who will base their opinion of you based on your ambitions, resources and the nature of your actions. How you react to the requests and demands of these creatures will effectively shape your attitude towards the main gameplay. A few crossed words can lead to full scale warfare while an olive branch in the form of tech, treaties or cold hard cash can create an everlasting friendship. It doesn’t offer anything we haven’t seen before in the likes of Civilisation and it’s countless imitators, but it certainly brings what could have been a very dreary experience to life.

And that pretty much sums up Master of Orion in a nutshell. What could have been the next generation of 4X space simulators has instead rested on the laurels that made the original so brilliant back in 1993. The problem is many others inspired by the groundwork laid by Master of Orion have progressed, to create innovative, enhanced experience, overall leaving us with a good reboot that had the potential to be something more.