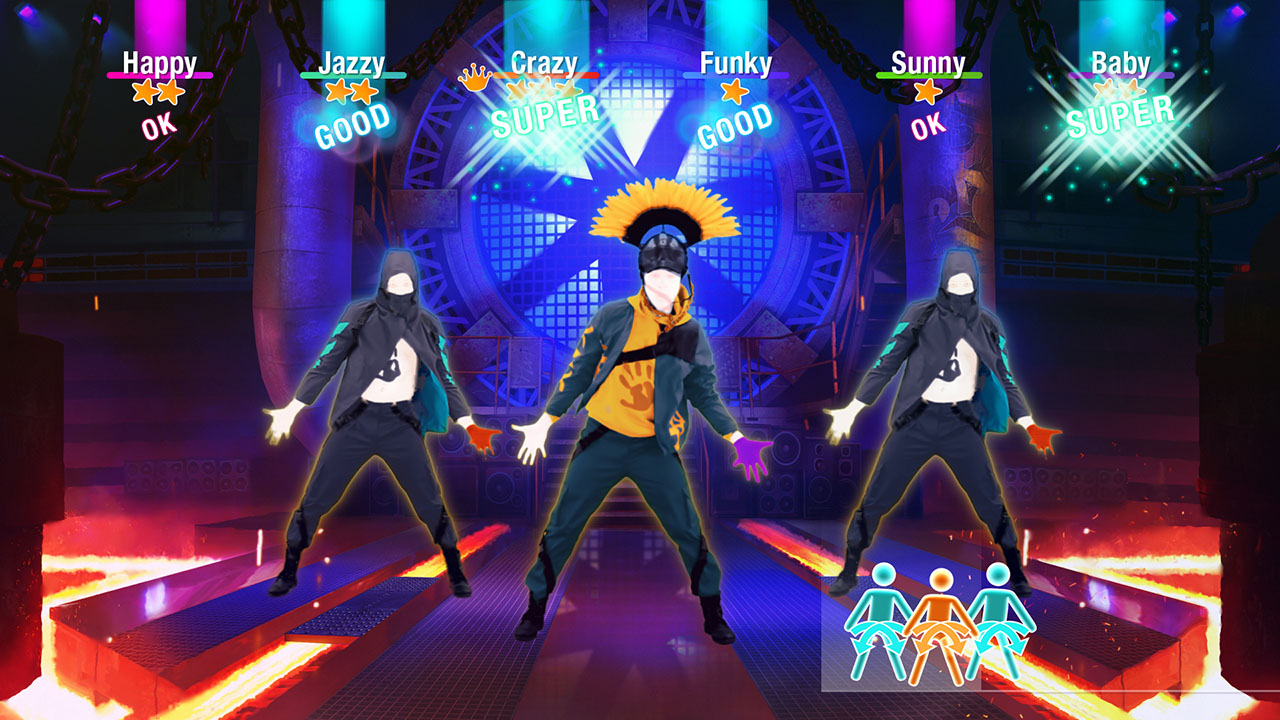 It’s borderline mind-boggling that Just Dance still exists. When the original was first released back in 2009, the rhythm game craze of the West was coming to a serious implosion moment. Still, the concept made sense at the time: use the motion control remote everyone had to use (original was for the Wii) to get people jiving along to Cotton Eye Joe and DARE. It was a hit, and it spawned more sequels than you could possibly imagine. Somewhere along the way, however, the series went from a smash hit to a sprawling, gesticulating behemoth, coming out on current consoles and ones that are seriously more than a decade old. Like, I’m doing this review for Just Dance 2019 on my Nintendo Switch, and I could have bought it for the Wii. It’s like those indie devs who release titles for the Dreamcast nowadays, but this is Ubisoft: they also just put out Assassin’s Creed and Starlink, so I wouldn’t call them indie.

But let’s run it down real quick. Just Dance 2019 does everything that the previous titles have done with a couple of small exceptions. For the uninitiated, you get to choose a song, and then there are strangely dressed characters on the screen that do dance moves that vary from “alright, that’s a dance move I’ve seen before” to “Oh my God, did he have a seizure during motion capture?” Your job is to copy the characters, and there’s a running track at the bottom that’ll give you numerical cues and more static gesture photos to clue you in as to what you’re gonna do next. Dance your heart out, get your heart rate up and your sweat on, and then get graded at the end for how well you and your crew managed to dance. Especially in Just Dance 2019, you’ll need to dance several times in order to unlock all the possible songs that you can choose from, which, to be fair, is quite a few. 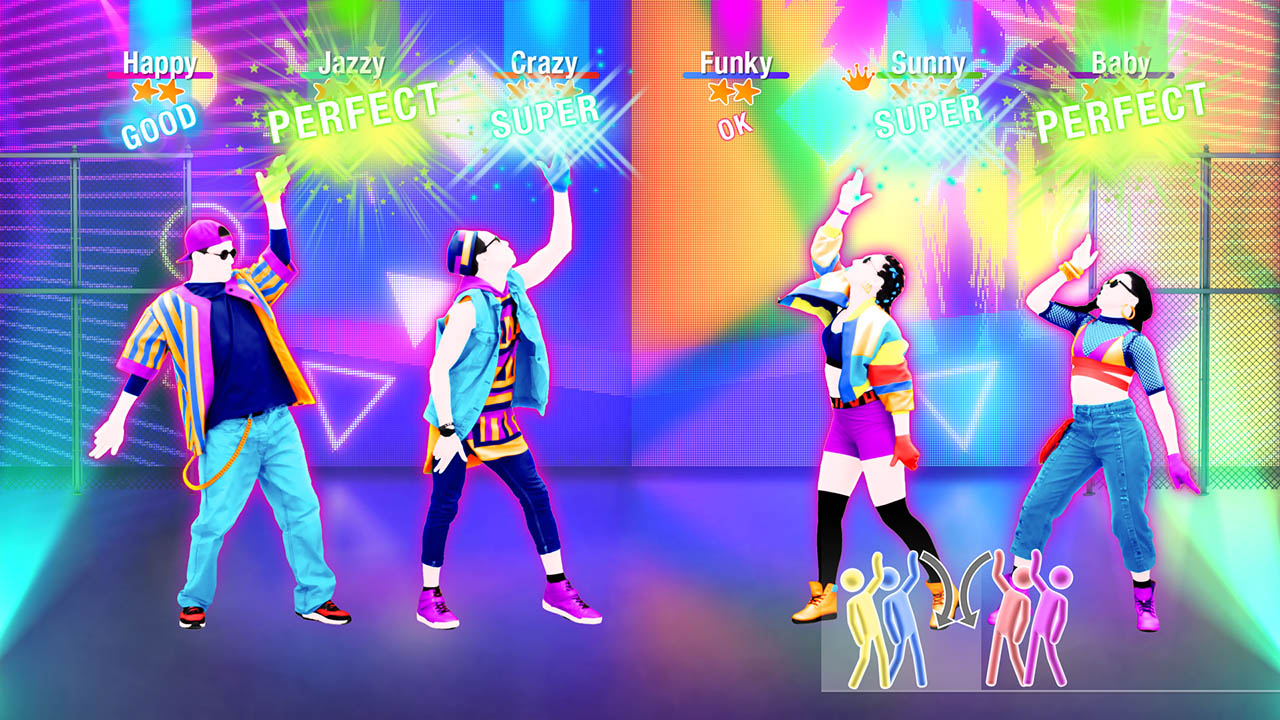 There’s also a Kids Mode, and the Kids Mode in Just Dance 2019 really shows how much I’m not a kid and my kids are kids. That’s because I think the characters and costumes for kids mode are downright terrifying (usually massive mascots) and the kids think they’re cute and hilarious. Kids mode has the added benefit of trimming down the songs to just ones that are most appropriate for children (though I’m still pretty sure every single Maroon 5 song is about sex) and also making it impossible to lose. Your child can flail about and find their rhythm without the pressure of needing to actually do well and without the pain of seeing negative reinforcement on the screen. Instead of BOO, they get WOW! And things like that. The Kids Mode alone is worthwhile for parents, as it’s the perfect way to get most children focused on something, listening to music that’s usually alright, and to burn off some excess energy on Sunday morning. Don’t feel like going out to the park or just turning on a movie so you can relax your way into the day? Have the kids keep doing Un Poco Loco until their legs are tired, and bam! Instant parenting.

At the core of everything is the core gameplay, and Just Dance 2019 doesn’t add anything new in terms of mechanics or approaches from the previous games. Without being facetious, this really could have been a massive DLC pack for Just Dance 2018 and people would have been great. I sort of miss my time with Just Dance 2016 on the WiiU and being able to video record some of my dance moves via the GamePad, if only because of how ridiculous we all looked, but I understand that Just Dance 2019 is a representation of community feedback mixed with what’s most lucrative for Ubisoft. All the additional social networking stuff never really made sense, as people who want to put clips of themselves dancing terribly onto the Internet can do so via any number of platforms. The focus on the smartphone dancing app is lower, which I appreciate, because I never felt comfortable flailing about with an iPhone in my hand. But things really have been stripped down: you got your main game, you got Kids mode, and not much else.

Instead, as a trade-off, you have more of a focus on the music from Just Dance 2019, which I seriously appreciate. With a decent berth of songs from all types in the game (including a pretty decent cover of I’m Still Standing), the game sort of figures out algorithms based on songs you enjoy and songs you do well at to recommend the next track, or even a playlist of what you can and should be dancing to. You have plenty of incentive to dance, and the game positions itself to be someone trying to upsell you on the next great song, which isn’t the worst thing in the world. As long as you’re totally in on Just Dance, the whole thing works out insanely well, especially if you’re willing to drop on the Unlimited services. 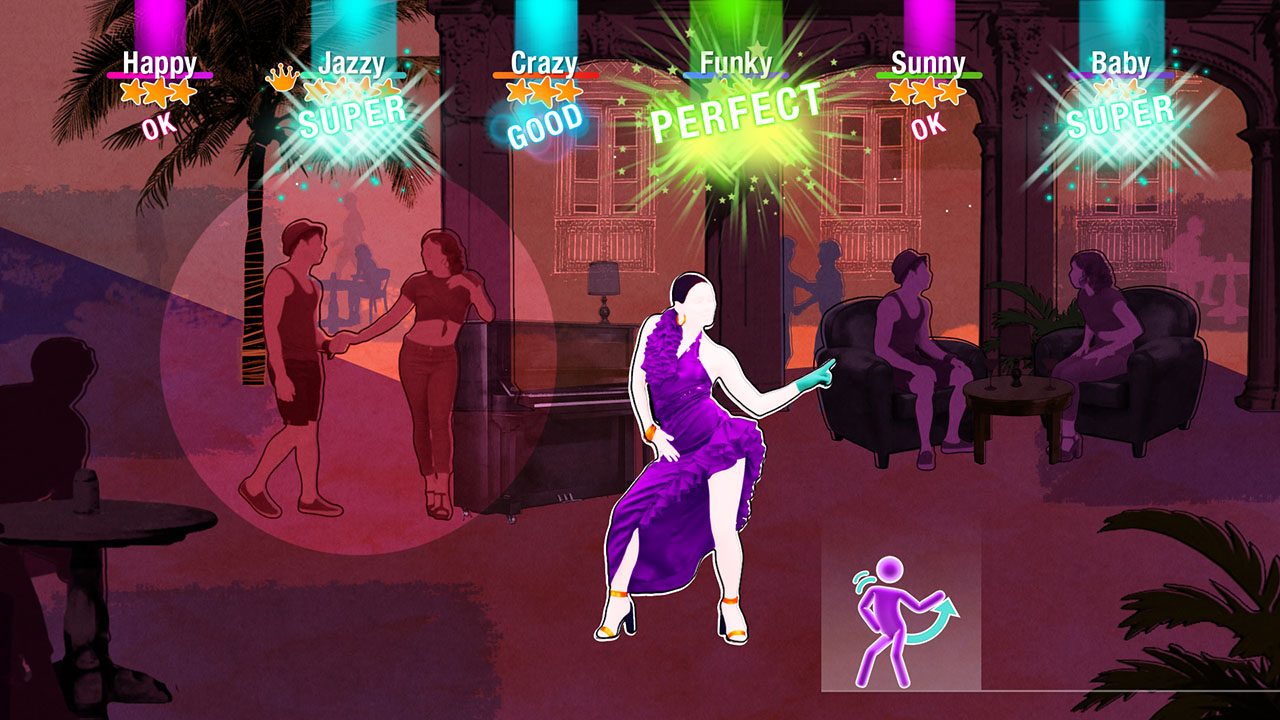 Alright, Just Dance Unlimited is still here, and it’s not going anywhere, and that’s not surprising. Over the course of the years, Just Dance has done a bang up job of selecting the songs that are most currently overplayed on the radio, good dance hits from around the world, and digging up titles that are far younger than the audience but still quite catchy. They’ve nailed the price point, and it totally makes sense with the evolution of the game’s actual price. Let me put it this way: things like Madden, Call of Duty, and various other sports series see new incarnations almost every year, and they cost top dollar and depreciate in value within weeks of release. The new FIFA game came out just over a month ago and you can already find it hovering around the 30 dollar price point. With Just Dance 2019, they’ve slashed the price down to 40$ out the gate and then give a month of Just Dance Unlimited for about $25 a year. Giving access to the past few years worth of songs on the current game isn’t the worst deal, since we know there’s not going to be a chance to simply get a DLC of permanent, one-time songs. Part of me says we shouldn’t accept this, and we should be angry and demand that Ubisoft give some ways for people who’ve bought the game previously to bring over their songs. The other part of me understands that subscription based services are the way of the future, and this does, technically, cut down on the cost of the game itself, which has a pretty decent song base to begin with (BlackPink was such a great addition).

The only thing that I truly, truly despise about the game is the gacha system. Everytime you dance and do well, you get a certain number of coins. These coins then can turn around and be put into an imaginary machine that’ll give you “prizes.” These prizes consist of random cosmetic things, like new avatars, titles, etc. That’s all well and good, even if it’s terrible, but I get that people like to have purpose, and the game needs to create a reason to instill a frequent player base. Why dance close to 800 songs in a row to get enough coins when you just need to show up, once a day, to get a pretty good amount and ultimately build towards a big ol’ cache of cash? But my disdain comes from the fact that several songs are locked within the gacha machine, becoming available only if you “win” them. Meaning that you can cater to their rules and dance a certain number of times to unlock stuff, and you can pay extra to get the Unlimited pass, but, at the end of the day it’s dumb luck that decides if you can use all the music that you paid for. That’s some straight up exploitation, and Ubisoft should be ashamed at that decision.

At the end of the day, Just Dance 2019 has a lot of positives about it. Huge, contemporary song catalog, decent install size, up to six players and some actual seasonal music that makes sense and will appear and disappear based on the calendar. I worked up quite a sweat doing this song with my kids, and I had a ton of fun, and most people who get this game will too. I can’t express how much it rankles me about the gacha songs, but I have to swallow my displeasure and admit that most of them I wouldn’t have wanted to dance to anyways, so my indignation is about the principle of the decision and not the actual execution. Plus, I honestly can’t complain about the price cut, because putting it into more hands to encourage more dancing is a good step forward. I’ll just keep my fingers crossed for something truly innovative for 2020, though, more than likely, we’ll simply keep dancing.

Just Dance 2019 goes through the motions of the previous games, reminding people that, if customers keep buying it, they’ll keep making it, even for the Wii.