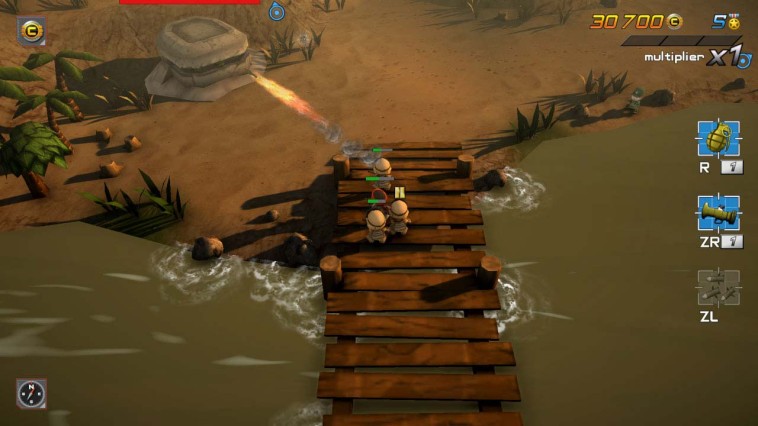 Making things smaller to make them seem cuter or less threatening is an age old tactic with varying degrees of success. Making miniature rottweilers, for example, is incredibly successful in minimizing damage and actual threat, but still keeping the rage of a much bigger dog in something that you fit into your handbag. A snub nosed revolver, on the other hand, is seen as a “dainty” alternative to a full sized gun, but still carries the same power and fear that a much larger pistol would. So it’s not clear what exactly the effect that Kukori wanted to deliver with Tiny Troopers: Joint Ops XL, because it’s definitely not cute enough to mitigate what the storyline provides, but it’s also not threatening enough to actually keep players on the edge of  their seats.

The plotline of Tiny Troopers: Joint Ops XL exists, but it’s barely relevant enough for players to concern themselves about and acts like less of a framing device than the Switch you hold in your hands. Essentially, you command a squadron of soldiers, a small squadron (both in stature and number of bodies) and you go about doing various missions in an overall arc of “we’re the good guys.” The biggest problem that Tiny Troopers has stems from its origins, which go all the way back to 2012, when Chillingo originally helped bring them to the mobile Wild West of iOS. There’s nothing wrong with games having zero plotline to keep the mechanics going, but I take a lot of umbrage when plot is hastily shoehorned in as an attempt to make the game somehow seem more atmospheric or important than it really is. The cutscenes are exceptionally dry and do little to help move along your purpose, and it almost would have been better to remove them entirely. Again, there isn’t enough humor in the presentation to mitigate the tasks themselves, but, at the same time, there isn’t enough gritty exposition to actually make this feel like a wartime game. 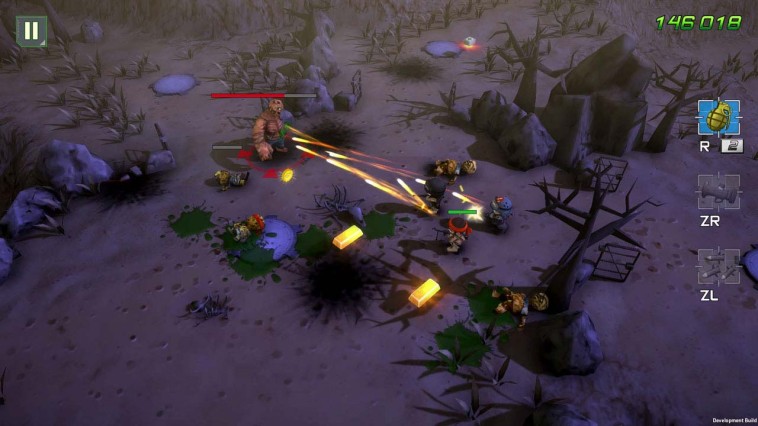 Once you get past the initial impressions, Tiny Troopers: Joint Ops XL does a good job of presenting the core gameplay, which is focused on moving your squad around the map to shoot enemies, pick up collectibles and eventually get to an extraction point. The controls of everything handle surprisingly well: most of the mobile ports that have come to the Switch give the impression of hastily done attachment to physical items that come across wonky and inaccurate. Quite the contrary, players will find that moving, aiming and directing come much more successfully with the use of buttons, and you’ll be happier for it. Besides the normal gun that you start and run the whole game with, you’ll also get various “superpowered” items, such as grenades, rockets and firebombs. I cannot stress enough how utterly worthless the grenades are, since they do try to emulate how actual grenades would act. This results in bouncing explosives that take a lot of patience and effort in gauging how far the enemy is, how much they’ll move in a couple of seconds, how hard you can throw it, what the fuse on the grenade is…it turns into an algebra equation every lob, and I had significantly better success just shooting the crap out of things.

Each stage of Tiny Troopers: Joint Ops XL has a one to four difficulty range to accomplish, with more spendable points being awarded for the higher levels, though none of them are particularly difficult. With the lower ranges, the gameplay devolves into running straight forward and shooting the hell out of everything without much thought. With three or four, you run, shoot and then fall back a little, turning it into a calculated dance that tests if you know the exact range limit of your opponents shots. There’ll also be more soldiers and fewer health kits, but none of that should be something that stands as a large imposition. Again, this is a mobile port: the game was meant to be a fun pick-up-and-play situation, not something that required hours of invested time. In fact, players will find themselves rocketing through levels using the tried-and-true method of beating everything on level one, banking a ton of points, then upgrading and dropping back in for another go around. And the upgrades are nothing to sneeze at.

Upgrading your Troopers is the core fundamental to making the game both more enjoyable and, ultimately, the best way to succeed. Besides some pseudo-aesthetic upgrades in the form of uniforms, there are several clothing changes that add effects, like granting extra damage or bonus points upon mission completion. You are able to upgrade your primary weapon to shoot faster, stronger and more accurately, and you can also tweak your health and defense to become unstoppable. You can also unlock additional units to use, but these are a single mission purchase, so the functionality of this is really on a need basis that, for many players, you’ll never run into until more than halfway through the game. Once you pump a bit into a faster fire rate, you’ll find that the standard missions become less of an actual engaging fight and more of a “just get through it” sort of situation. 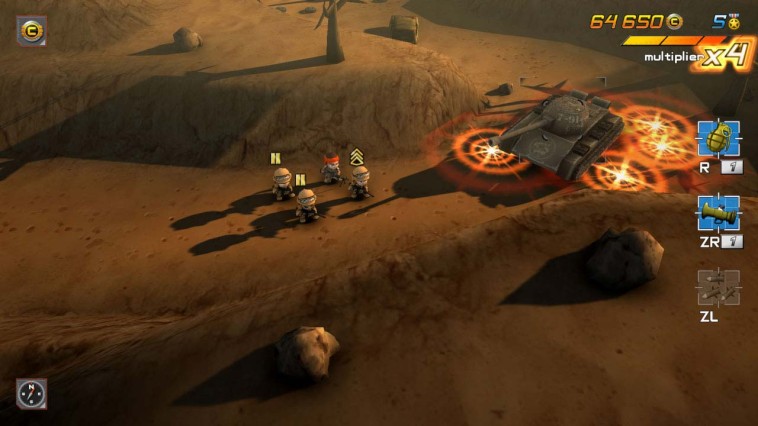 The XL of Tiny Troopers: Joint Ops XL refers to a lot of extra content that’s been packed into the game since its initial inception. Besides the original missions, the sequel missions, Special Ops, have been included, as well as a slew of different “zombie missions” that may have been added especially for the XL edition, I’m not sure. The Special Ops are comparatively easier, with more of a focus on stealth and that kind of “I’m an elite soldier” vibe than the original Soldier missions. You encounter substantial smaller maps that, while sometimes jam-packed with enemies, are still fast to navigate and practically over before you start. The zombie missions are surprisingly fun and sprawling, with a lot of encounters and mechanics that simply can’t exist in the standard missions (zombie chickens, fire-breathing mobs, etc.). Even though they’re certainly a departure from the original situation, you can enjoy them and gain upgrade points same as anything else. There’s also a Zombie Horde mode that’s little more than a wave survival, and I honestly didn’t enjoy it or find purpose. You just keep shooting down the zombies, and, when you get overrun after some time, you have a high score. It’s an arcade mode that’ll keep people who LOVE Tiny Troopers engaged and just waste time for anyone else.

The best emotion that I can ascribe to Tiny Troopers: Joint Ops XL is pleasant surprise. I didn’t expect much from this game and was rewarded by a fun few hours of decent gunplay and upgradeable units. There’s certainly plenty of content to be explored and enjoyed, and the developers did right by making this a solid experience for Switch players instead of slapping some label on a smartphone game and calling it a day. If you’re looking for a fairly mild twin stick shooter with a bit of strategy baked in, then fall in line, soldier, and get ready to blast away at the smallest insurgents you ever saw.