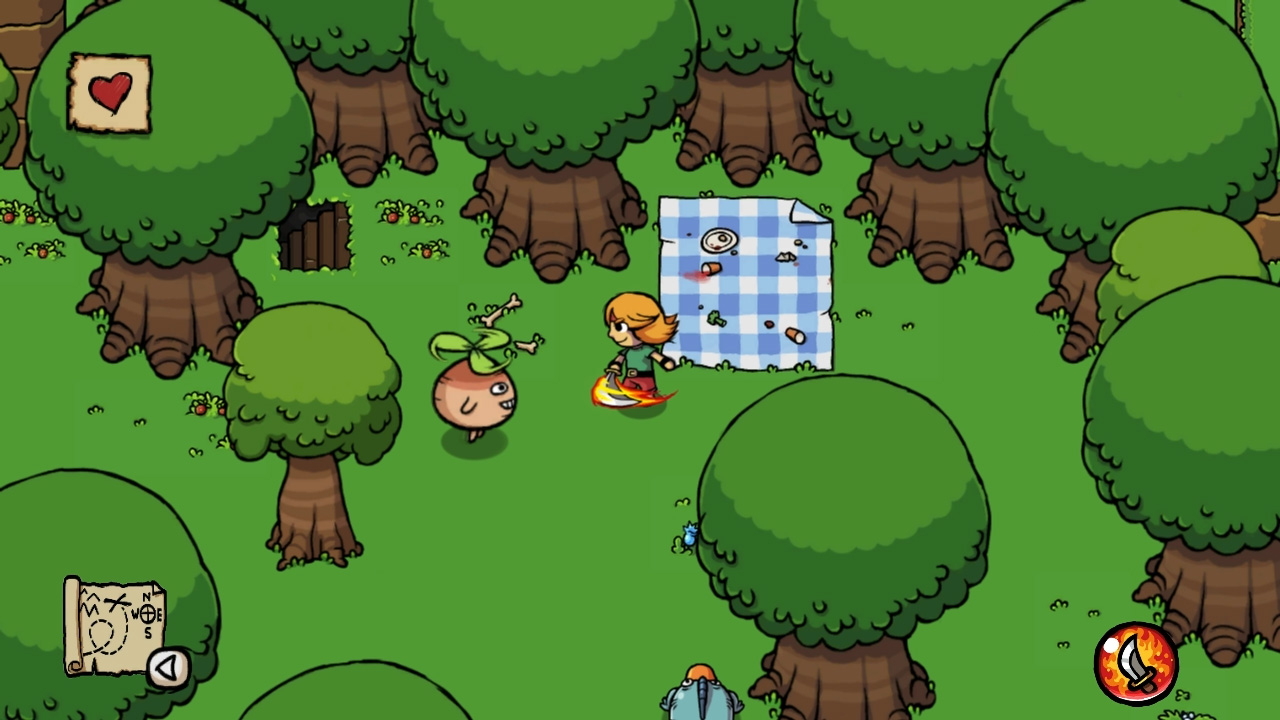 I’ve had Ittle Dew 2+ on my wishlist for months. It looked terrific, and honestly, all I needed was a screenshot that made it look like a game from The Legend of Zelda series to make me crave it. Then the original game – Ittle Dew – released and I couldn’t wait any longer to try the series out.

Ittle Dew takes the formula from The Legend of Zelda series, focusing more on terrific puzzles while injecting a remarkable amount of humor, charm, and adorableness. Ittle Dew and her potionholic sidekick Tippsie find themselves raft-wrecked on an island, and a kind shopkeeper says he can create them a new raft if they can get an artifact for him from the puzzle-filled castle nearby. Armed with only a stick and your wits, you’ll have to find enough money to buy the equipment you’ll need to get through the castle, grab the artifact, and move on with your adventuring life!

The first thing I noticed about Ittle Dew is just how adorable everything is. The art is terrific, especially for a Zelda-like game. The colors are sharp, there are terrific details everywhere, and there are quick little clips that show Ittle Dew and other enemies or even puzzle elements to introduce things.

The next surprise was just how puzzle-centric this game is. You have a limited amount of health and there are enemies to deal with, sure, but the vast majority of the rooms in the castle and other areas require a solution to a puzzle (or numerous puzzles) to complete. Unlike many games, the puzzles mostly rely on your creativity; there are only three items you’ll get in Ittle Dew! What’s particularly great about this is that all three items are permanently bound to the A, B, X, and Y buttons without ever having to swap anything. The other amazing thing is just how well these items synergize with one another. Once all three items are in your hands, the world is your oyster, and Ludosity knew it when they designed Ittle Dew‘s puzzles. 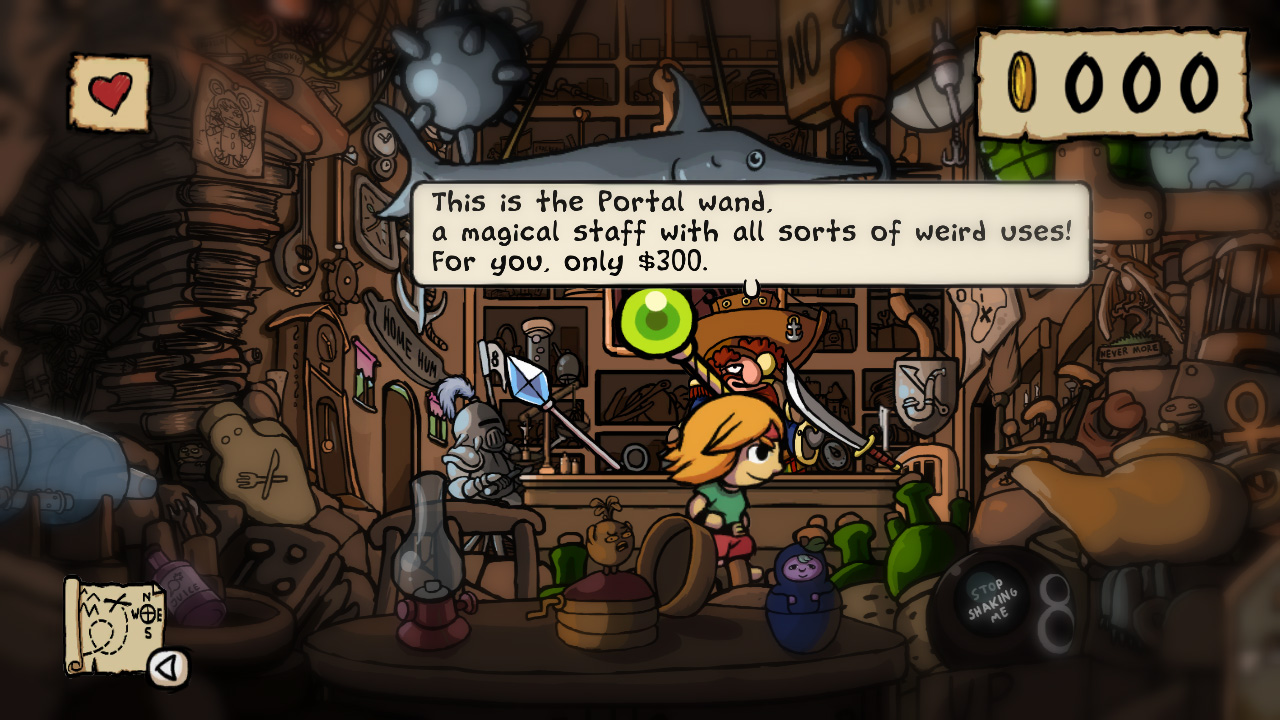 I love puzzles in games, but it seems like so many these days take your hand and walk you through anything that could be the least bit challenging. This couldn’t be further from the truth in Ittle Dew. In fact, if it wasn’t for Tippsie’s help (and maybe a YouTube video or two…) I never would’ve gotten through them! I couldn’t have been happier with the difficulty and creativity of the puzzles, and it was interesting that I never felt like I was doing the same thing repeatedly even though there are soooooooo many block puzzles! Being able to smack a door or set of posts that are in your way to see what you need to accomplish to get through it is absolutely brilliant as well. Then there’s the shopkeeper himself, who’s a bit of a trickster; after dropping money on the first piece of equipment, the shopkeeper tells you that he’s actually selling you the location of each item and then sends you there to get it. This serves as a bit of a tutorial for the item as you lose your other items in the process, leaving you to focus solely on the new one. These introductory areas are a terrific way to allow players to get used to a new piece of equipment, especially since each of the three items has far more depth than one might think at first.

While there’s been a lot of talk about puzzles, Ittle Dew certainly isn’t a pacifist. There are numerous types of enemies in Ittle Dew, including bosses. Sometimes you’ll need to complete puzzles with these enemies, and sometimes you’ll just need to kick some butt before you can focus on the puzzles. In either case, the three items you’ll earn can all deal with enemies in creative ways as well. In true Zelda style, bosses require this kind of creativity, and so do some of the enemies, but it’s just downright FUN to obliterate enemies in various ways – even when it’s not necessary – instead of just bashing everything to death. Does an enemy have an unpredictable AI and require lots of hits to kill? Just teleport it over spikes and boom, insta-kill! 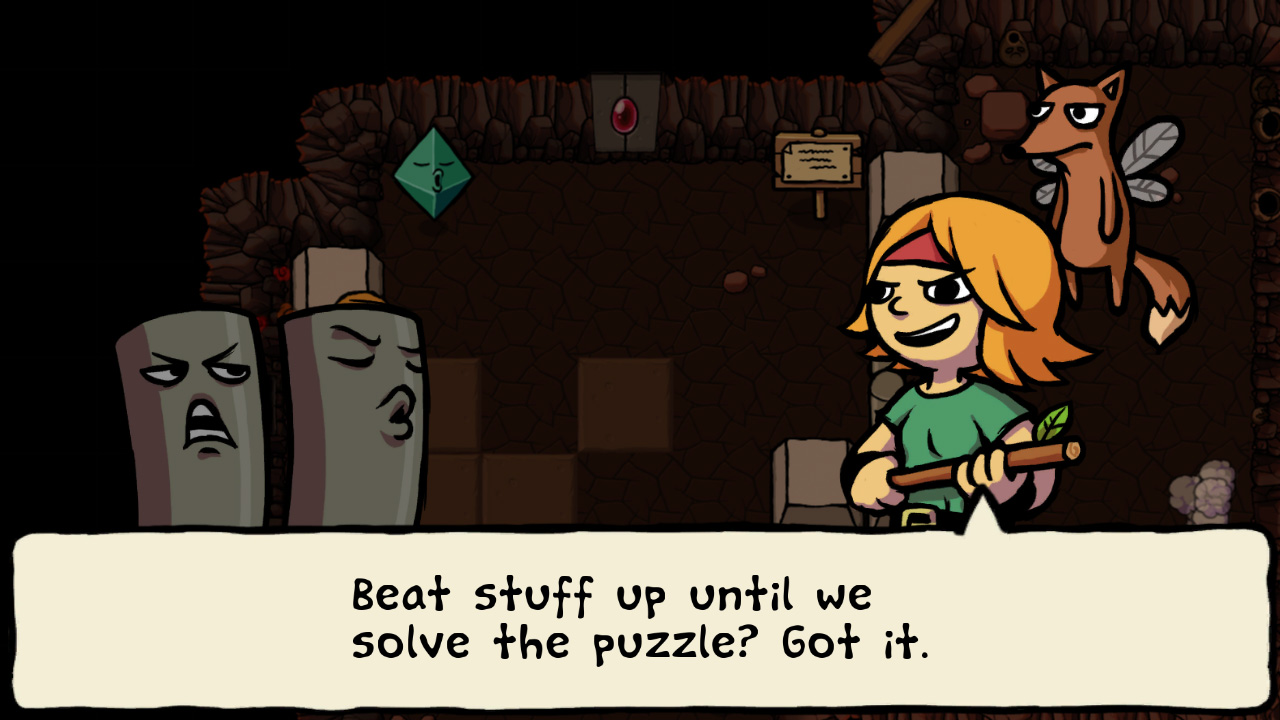 Then there are the hidden secrets of Ittle Dew. While the object of the game is to solve puzzles so you can open chests for money to buy new equipment that allows you to make your way through the castle, there are secret places, treasure chests, and optional puzzles everywhere. Many of these involve more difficult puzzles, and there are two additional caves full of truly ridiculous puzzles as well. One of these caves was a bit disappointing because, although it warned that the only reward was an achievement, the Switch doesn’t have achievements. The other is still rewarding for anyone who can complete it, although figuring out how to solve all twelve puzzles can take as long as completing the whole rest of the game. I only managed to solve six of them myself, and two of them required help. Oddly, this is more of a positive than a negative: I was able to thoroughly enjoy the full game and merely missed out on part of an added, optional challenge that puzzle lovers will particularly enjoy.

The puzzles and combat in Ittle Dew are terrific, and the artwork is tremendous, but what makes it such an easy game to recommend is the amount of humor and charm that’s woven into every element of its experience. For example, there are only three possible rewards in treasure chests: money (to buy equipment), pieces of paper (to increase your max health), and trading cards. These trading cards are all hilarious, giving players a bit of information about a character in the game along with their likes and dislikes. Every animation, every bit of detail, and every possible opportunity that Ludosity had to inject extra detail into Ittle Dew is taken advantage of. It’s a highly polished experience, and while it’s rather short (I beat the game and half of the Master Cave in around three hours), it was a delight to experience. It also essentially dares players to try again, beating it faster and/or without purchasing all of the equipment and using even more creativity the next time around. It’s a challenge I certainly plan on attempting, although I may need to go back to my old friend YouTube from time to time.

Ittle Dew takes the formula from The Legend of Zelda series, focusing more on terrific puzzles while injecting a remarkable amount of humor, charm, and adorableness.