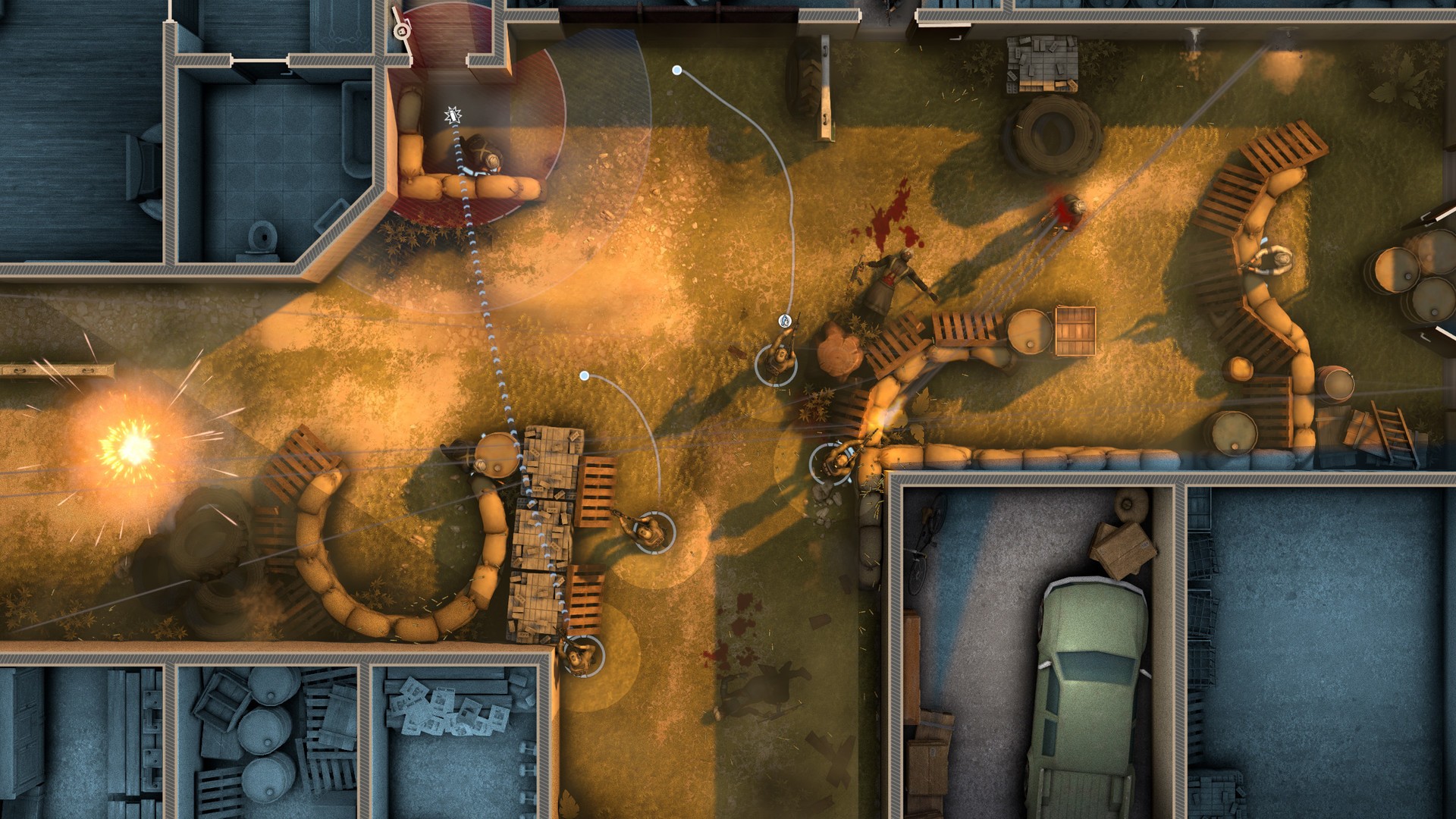 First things first, for those that missed out on the 2014 hit, Door Kickers, I highly recommend you check that one out if you’re a fan of tactical games like Frozen Synapse, or if you ever wanted to play a top-down version of the SWAT series. If you wait for a sale you can get it dirt cheap, but it’s more than worth it at full price. Sure, this is the sequel, and even though there’s no story continuity, I highly suggest that you check out the original due to how good it is. However, if you fancy something more of an arcade side-scroller that still follows some of the tropes of the series, I also recommend Door Kickers: Action Squad.

I must say that I was really surprised when I found that, seemingly out of the blue, Door Kickers 2 had been released in Steam Early Access. After the treat that were the previous two games, I honestly couldn’t wait to dive into this one. So, what’s all this about door kicking? Well, while it might just be a part of what goes down when someone plays Door Kickers, the name perfectly summarizes the spirit of the game. Door Kickers 2: Task Force North, just like its predecessor, is an extremely tactical game where you command a squad of soldiers through a multitude of close quarters and breach and clear scenarios. These range from simple hostile elimination, to rescuing hostages, abducting targets, or even stopping executions.

The game is played from a top-down perspective, which is perfect given its tactical nature. The way that you control each individual soldier is also really well done, mostly due to how intuitive the game’s control scheme is. Basically, the game has a planning phase and an execution phase. The game always starts in the planning phase, where you simply select which soldier you want to give orders to, and then you draw the path that you want your soldiers to take by simply selecting them and using the mouse to delineate their pathway. While the pathway editing is done in a great way that everything is intuitive and easily done through just a few mouse clicks, sometimes it can be finicky, like when you’re attempting to change the path of a soldier that is really close or overlaps with one from his teammates. Everything else, every action and manoeuvre that a unit can undertake, is done through a waypoint system that allows you to place actions along their path. 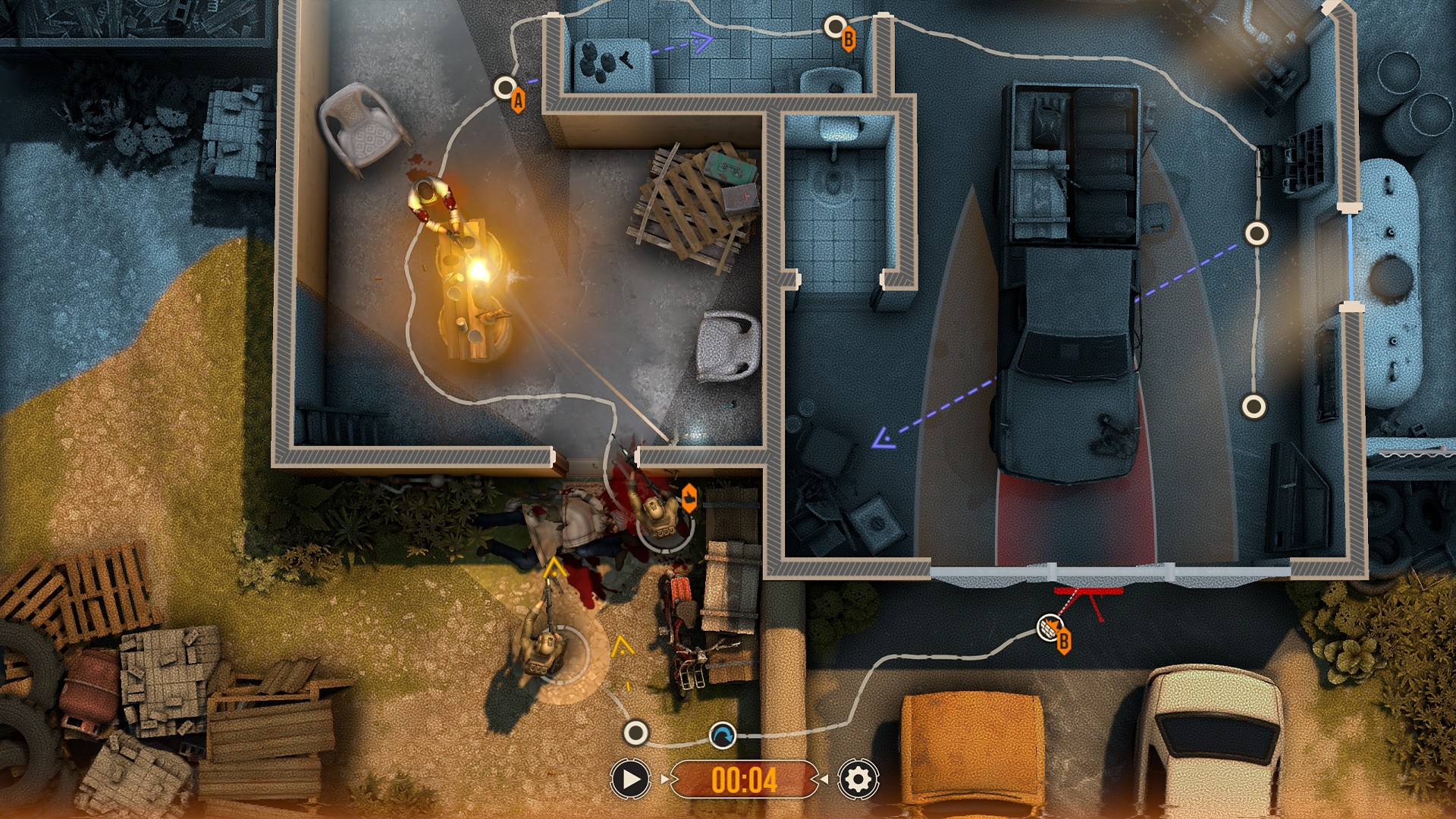 Depending on what equipment each soldier is carrying, their range of options can differ, but you can do things like setting up spy cameras on doors to see what’s waiting for you on the other side, you can order soldiers to sprint, crouch, place wall breaching charges, or kick down doors and throw a flashbang so that you can storm in and clear groups of enemies. The game also allows you to set up synchronized actions, by assigning different soldiers to a group, which lets you perform really cool procedures that prove vital in overcoming overwhelming enemy forces.

As I’ve mentioned, there are various mission types that force you to change your approach, as in one mission you’ll be tasked with rescuing hostages, while on the next you might have to stop an execution, all while engaging whatever enemies that might be lurking in cover waiting for you. It’s in moments when you’re faced with overwhelming odds that the brilliance of Door Kickers kicks in, as you carefully plot your plan and order your soldiers to execute everything in synchronicity. Sometimes, things might not turn out the way you were hoping for, but luckily, you can just easily try again, make a few adjustments to your plan and watch as your squad carries out their orders and completes their mission flawlessly.

When you start a new mission, you can customize the gear and starting positions of your squad, and, after doing so, you can then begin laying down the plan of attack. It’s worth noting that even though you can completely draw the path and manoeuvres that you want your soldiers to take before hitting that play button and let everything unfold, you can also pause the game at any time during the action phase and change your orders on the fly. The thing is, any changes made through this method aren’t saved when you finish the mission or if you press restart. The only plan that is saved is the one that you laid down before the action phase begins. This matters because the same mission can change where enemies and hostages are placed in different playthroughs. 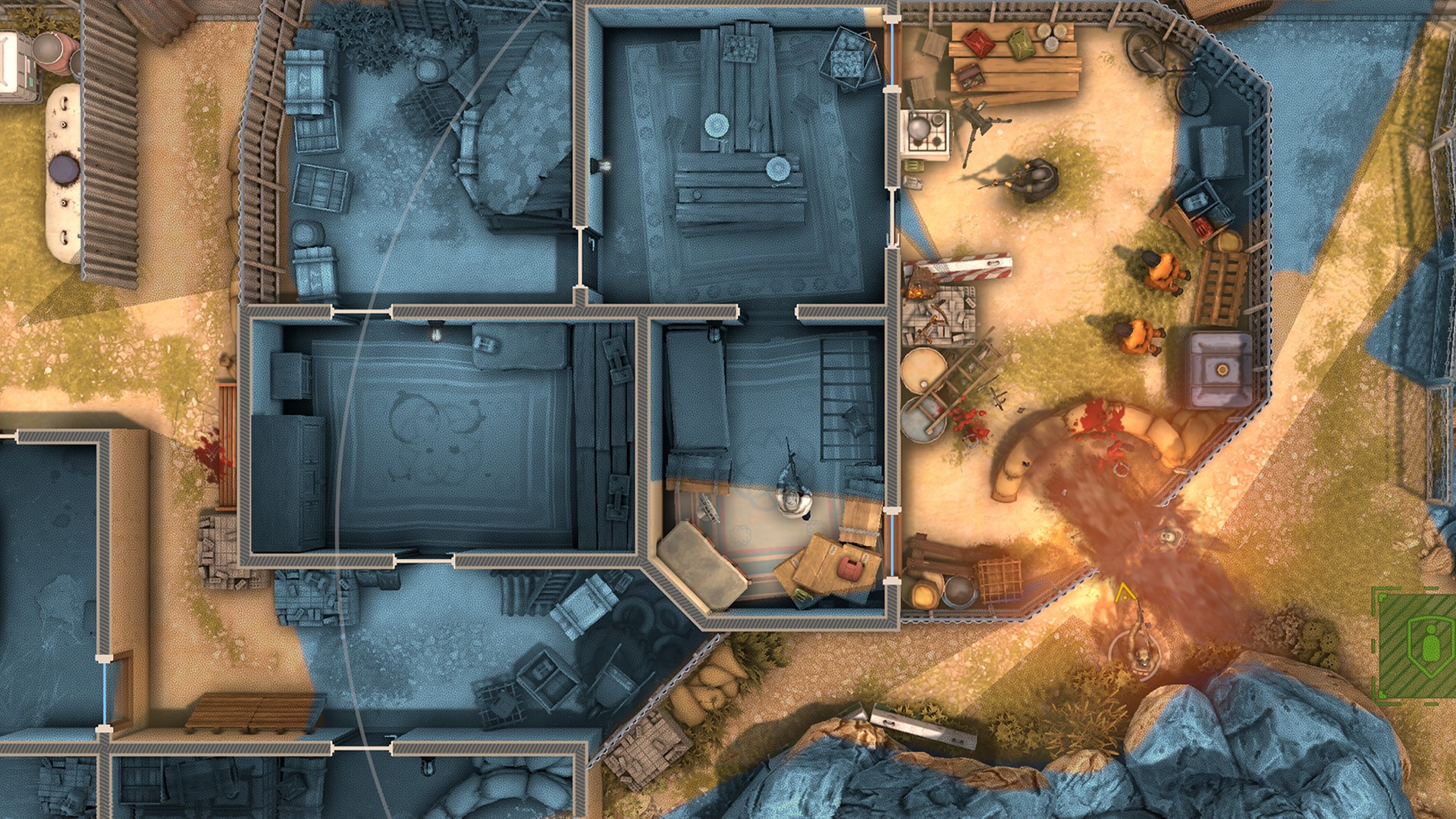 In terms of customization, at the moment, there are 4 different soldier classes, Assault, Support, Marksman, and Grenadier. Although all the soldiers in these classes start out with class-specific equipment, you can unlock other primary and secondary weapons, as well as weapon attachments, gadgets and grenades. Currently, there are over 20 weapons and other equipment that you can get, and each of them has different stats that make them better or worse than others in some aspects. With that said, I found that most primary weapons are not really that game-changing. For the most part, some weapons and attachments might only prove useful in a few specific situations, which I don’t think makes them worth picking over other weapons that are more well rounded. Still, depending on the mission, you might want to customize your squad so that you’re better equipped for the job at hand.

At the end of the day, we shouldn’t forget that Door Kickers 2 is still in Early Access, and, according to the developers, it’s supposed to stay that way for at least 12 to 16 months. Currently, it only has 25 missions, 15 of which can be played in co-op, but it already features a mission editor. If all goes according to plan, once the game reaches its 1.0 version, it should have about 100 missions, which should hopefully be playable in co-op, but it will also supposedly have plenty more weapons, gear, soldier classes, as well as full support for Steam Workshop, which will certainly help establish a healthy modding scene.

When you take everything into account, including the fact that the game is still in development and is still missing tons of content, I honestly don’t think that you can go wrong with Door Kickers 2, whether you were a fan of the original or if you’re just into tactical and strategic squad-based games in general. Door Kickers 2 is just a straight upgrade over the original, and given the developers track record, I’m sure that the game will improve where it can, at least while still remaining true to the developers’ vision. Door Kickers’ freeform gameplay that isn’t bound by turns or action points is iconic, and the way that it allows players to approach objectives from different angles is a beloved cornerstone. I honestly can’t wait to play more of it and I’m sure I’m just as eager to see the game receive content updates as every other single fan. Door Kickers 2: Task Force North will probably be one of the biggest highlights in the coming year, mark my words.