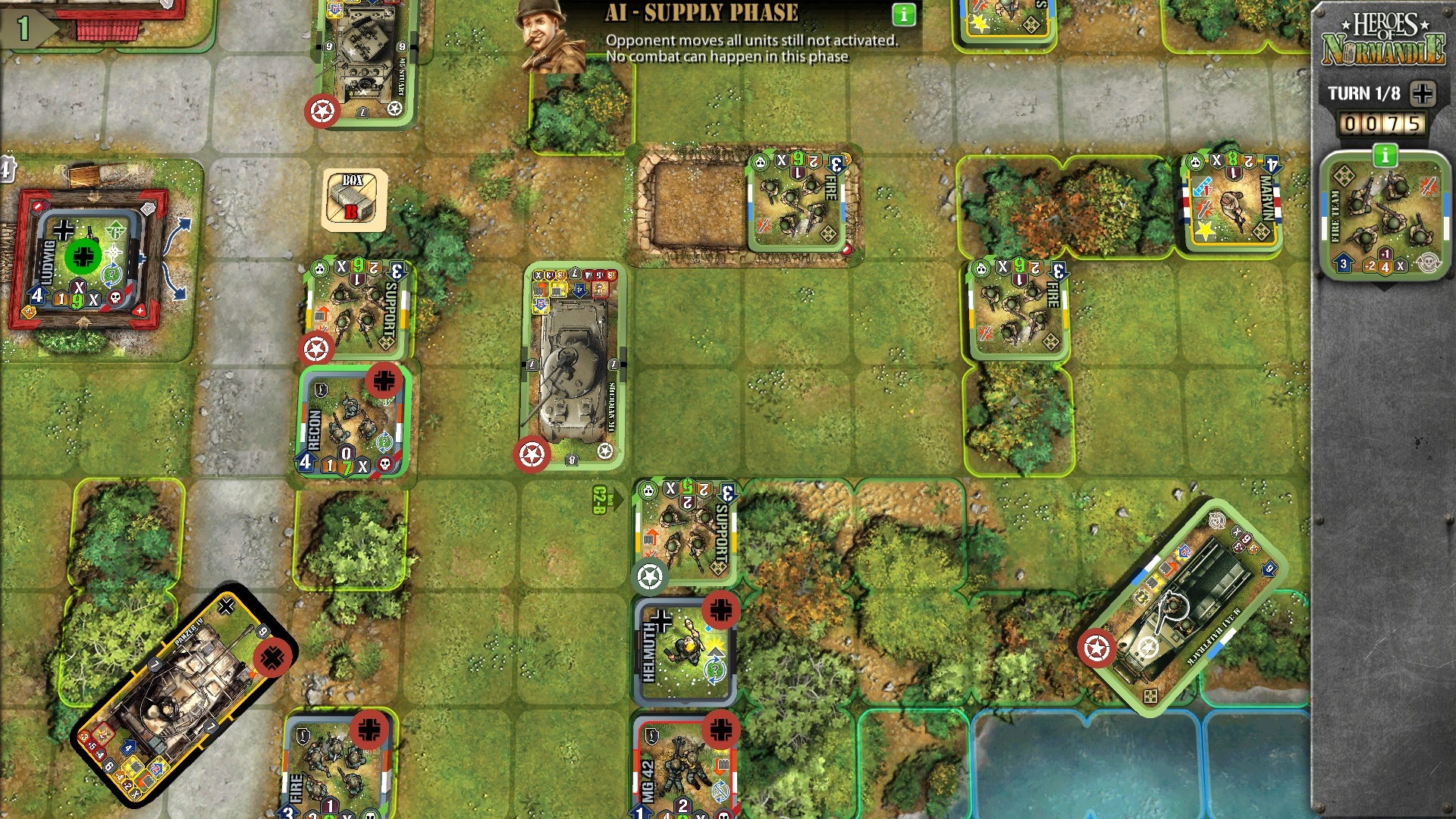 Anyone who has read my previous reviews on Bonus Stage will very likely know that I love to see my favourite board games adapted into videogame form. The Warhammer universe, in particular, has lent itself to countless different interpretations of how a board game could be streamlined for digital play. Most of the time, such streamlining removes or changes core gameplay elements to the extent that only the universe and its cast of characters remains.

Even so, board games have been growing in popularity in recent years, with the associated geek culture becoming an acceptable topic of discussion in the workplace or even (dare I say it) down the pub. This growing popularity and the acceptance that board games can be fun has led to more and more developers being bold enough to create faithful digital representations of the most popular board games. The subject of this review, Heroes of Normandie is one such representation, and I’m going to tell you all about it.

Ahead of writing this review, my exposure to the paper version of Heroes was quite slim and I had only an afternoon of skirmish play under my belt. I have always deferred buying the game myself, because it is relatively complex for the various casual players that I often coax into a quick round of Ticket to Ride, Catan or Carcassonne. Maybe Concordia, Formula D or Space Hulk if we are all feeling particularly brave. 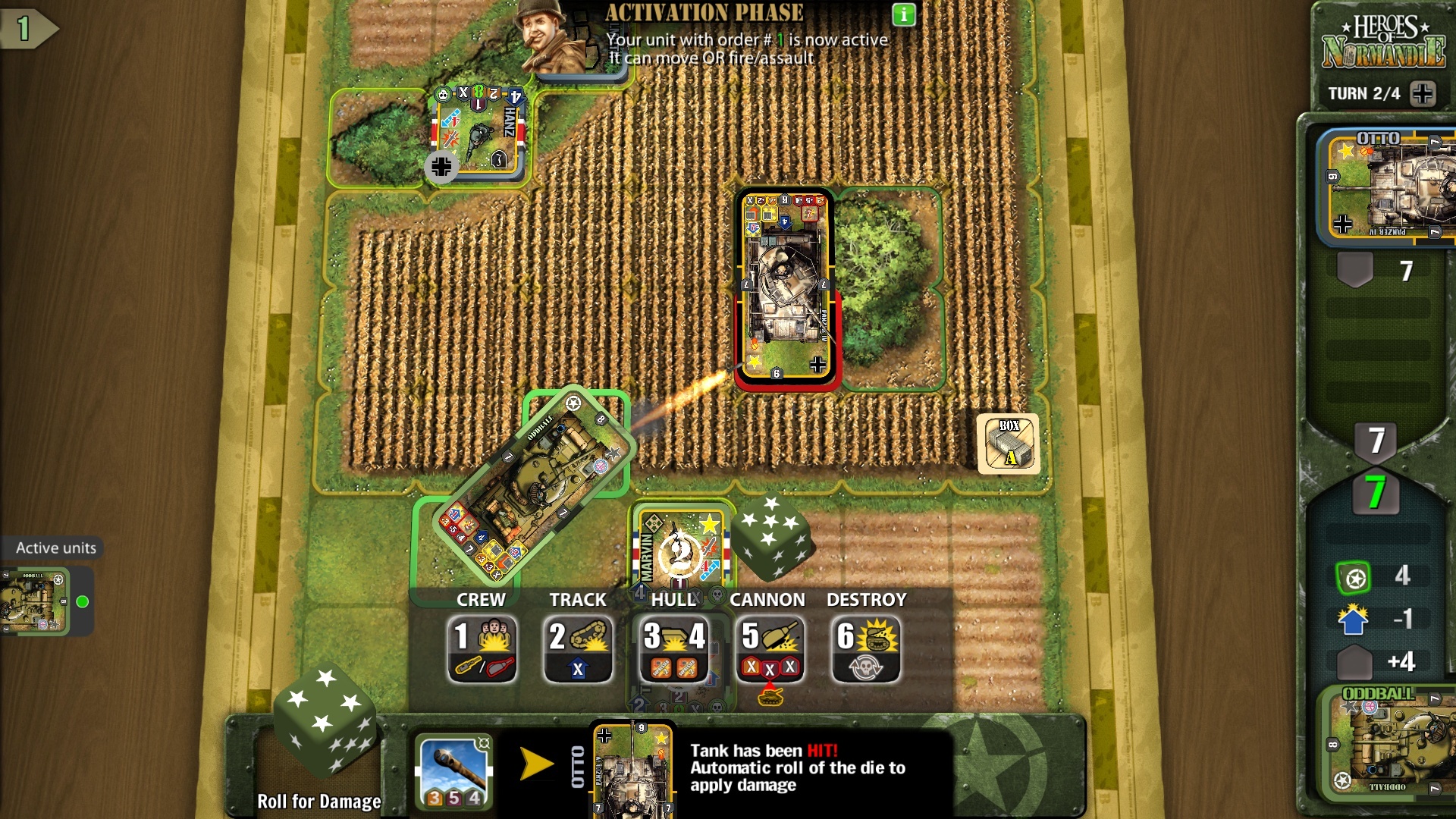 Perhaps a little surprisingly, it is the complexity that makes Heroes a decent candidate for playing digitally, because the game engine does all the complicated setup for you and ensures adherence to the rules. More than that though, the game does a decent job of presenting all of the various modifiers that will affect the action you are about to take, and offering a view of the possible outcomes based on the luck of the dice.

The game addresses its own complexity fairly poorly through a somewhat unhelpful Tutorial and an in-game Wiki that both seem to kind of assume that you already know the game to a greater extent than I think most people would. It doesn’t matter overly much though, because the clear interface and rules structure (with reminders about what you’re doing wrong) mean that you’ll soon get the hang of things by simply tackling the various single player campaigns.

There are around six campaigns depending on how you count them, with two each for the US, Axis and Commonwealth forces. Each of these is split into around five or six missions, and some of them can take over an hour to complete. Then there is a roguelike campaign for the US and the Axis, a Skirmish mode and a Level Editor. Multiplayer is clearly where the majority of players will spend their time, and considering this is a fairly niche title, getting a game is actually quite reliable at most times of the day (considering I’m playing in the UK.) Whether you’re playing against the computer or a human opponent, poor dice rolls are likely to cause the most frustration, and unlike say Blood Bowl, Heroes isn’t the kind of game where you have huge opportunities to minimise bad rolling. 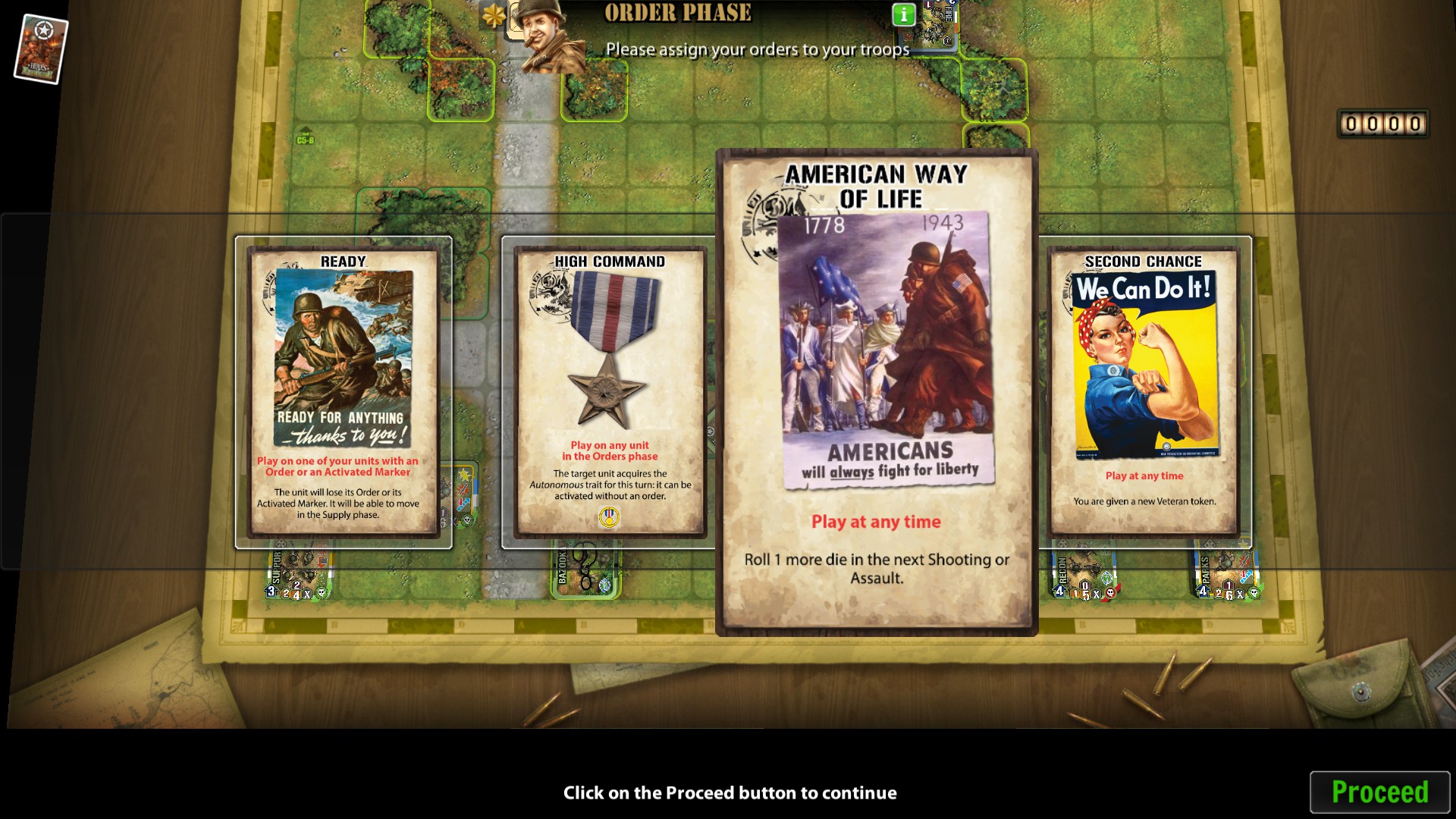 The game itself is a gorgeous reproduction of the paper version that it is based on. The graphics are inspired by 1940’s artwork and propaganda and the game tokens look just like those used in the original board game. Movement, terrain, unit direction and damage and basically every other gameplay feature is present and represented faithfully. The campaigns are loosely hung together by stereotypical representations of American, German and British personalities, but the game delivers its own brand of mildly racist comedy with its tongue firmly in cheek and is neither a hit, nor grossly offensive.

The gameplay in Heroes is based around anything from small to fairly large skirmish battles, with an underlying theme that any unit could make the difference. Regardless of the number of units in each army, players can issue orders to only five (or less) of them per turn. Initiative for the first action each turn passes between the players, and once all of the units with orders have moved and/or fired, the remaining units can be moved, but cannot fire or use other actions. Combat is relatively complex for a board game, with units that infantry units that take damage being flipped to a weaker side, and vehicles having different armour value on each side. Tanks even have different kinds of damage counters, meaning that a gun, or the crew could be disabled. There are special units such as heroes, and there are special weapons (such as rifle grenades) that can dramatically turn the tide of battle in the right circumstances.

These complexities, presented as they are through the clear, attractive interface do make Heroes an exceptional candidate for both conversion into digital format and for long-term play. This is not a game that you will master quickly, and nor is it a campaign you will finish quickly if you do decide to commit to it. The multiplayer mode has the potential to extend into the hundreds of hours, and a store feature already allows players to purchase extra content. Heroes isn’t a game for everyone, but I highly recommend it to fans of digital board games and because of it’s complexity, it can even compete against traditional turn based strategy.