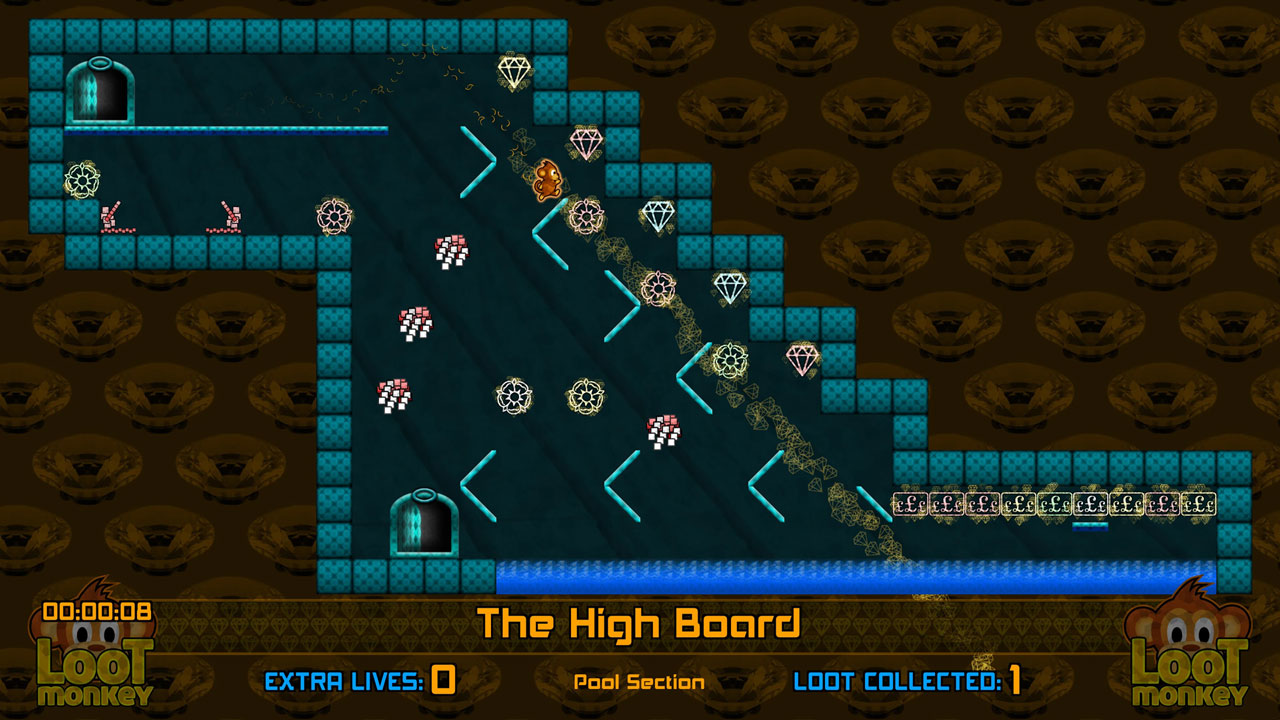 There seems to be a bit of a disconnect with some of the elements that modern gamers associate with the great and classic titles of a few years back. There’s this inherent lauding about the games that had very simple controls, flat characters and unforgivable difficulty, and this steps from a belief that it’s how the developers wanted their games to be. Now, I’m not saying that isn’t true, but I’m saying that games like Pitfall and Wizardy weren’t great because they were simple, it’s because they were great games. When future installments of both series came out, they were pretty well received (though I believe The Mayan Adventures should have gotten more attention). Basically, it’s not enough to just make a game in the style that you would have seen in the 80s, but to also capture what made games great about that time. Loot Monkey: Bling Palace seems to almost have captured the elements needed to make this idea a reality, but there’s still just a little something off.

Loot Monkey: Bling Palace is an updated version of Loot Monkey, a PC title I hadn’t heard of in the slightest before installing this game. You play Dougie the Monkey, who is the knockaround pet of someone simply known as The Evil Overlord. I guess the Overlord had some rager party, and now his pad is covered with both loose treasure and piles of vomit. Not wanting to deal with the vomit or the massive number of aggressive mobs and traps that were just left lying around, Evil Overlord sends Dougie out to grab as much loot as he can, ideally getting all of it. Dougie isn’t the fastest monkey, or the smartest monkey, but he is…the most available monkey, and he will have to traverse and explore a ton of rooms to get all that precious loot. What’s a monkey to do? Avoid nearly everything, grab the loot and get to walking. 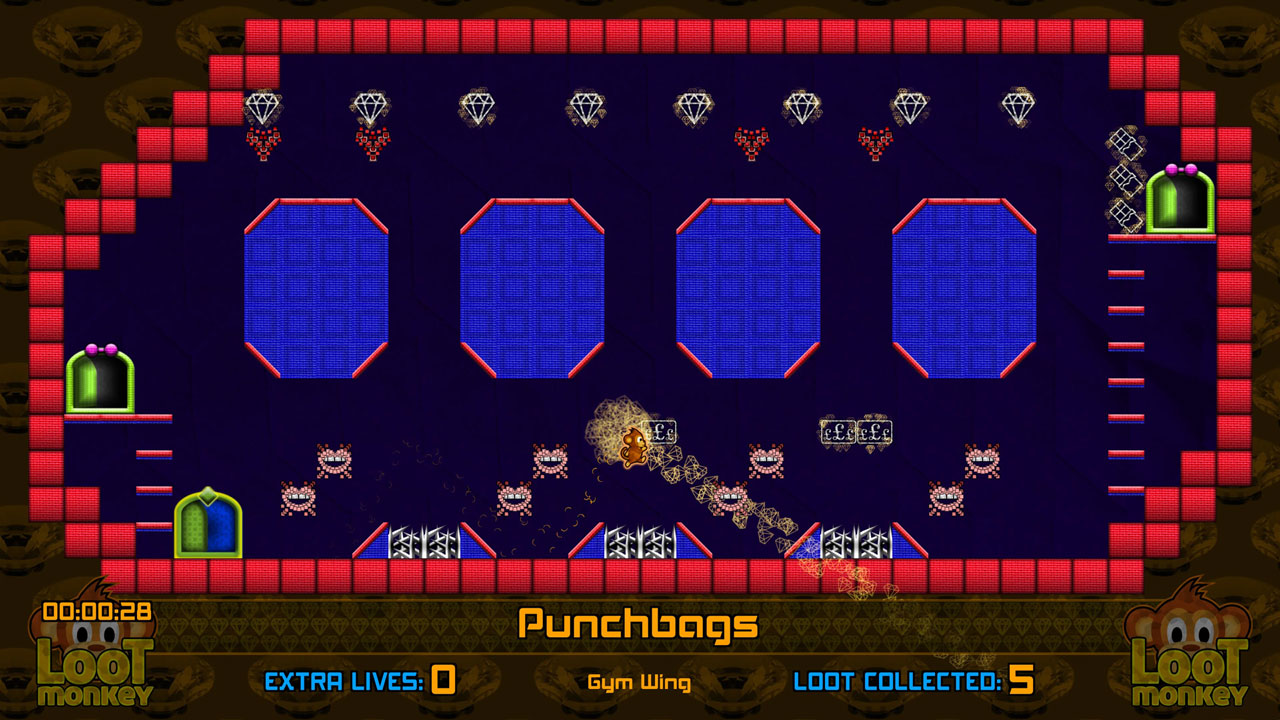 Loot Monkey presents in what’s called a flip-screen 2D platformer, which means there’s no easy, clear or straightforward way to get anywhere. Dougie has some limited mobility: he can jump his height and about three squares forward or backwards. That’s it for our monkey hero: no weapons or powerups are on the horizon, just doing what you’ve been instructed to do. Each room is peppered with smaller platforms that may lead to loot, doors or certain doom. The doors that connect each room are two-way: most of the time, you’ll have to go into a rabbit hole of doors to eventually land in the one room that has a nice stockpile of loot, collect it all, and then backtrack a bit. This door thing can be a bit annoying because you may, instinctively, shuffle around a bit to try to get your bearings, and the result is Dougie walking through the door, changing rooms multiple times before you finally resist the urge to nudge yourself one way or another. Also, don’t feel like you need to go hunting for loot: the stuff is in nearly every room, just there’s some more in one than another.

Loot Monkey: Bling Palace is really, really trying to capture the spirit of games of the early 80s, specifically name dropping Manic Miner in their game description, and they…mostly do it. With a limited jumping range and a perchance to die if he touches something pointy, Dougie has little choice but to really, really consider his moves before he makes them. You don’t always have the luxury of thinking time, however: there are more than a few places where your spawn point can and will become a burial plot if you’re not on top of things. Between lasers, spikes, and weird piles of pixels that are supposed to be enemies, Dougie has no lack of murder atmosphere. It’s sometimes a bit weird: Dougie himself is a bit more flushed out than everything else in the castle, which almost makes it seem like he’s tripping off monkey peyote or something. Seriously, when you’re the most clearly defined thing in a room, and everything else is an odd mixture of luminescent treasure and angular, angry colors, I’d wonder what was in that last banana. Anyways, there aren’t save points or anything to that effect, just a lot of nose-to-the-grindstone work to make sure that you get things down. And, to be fair, once you get the basic controls under your belt, you have no one to blame but yourself for successes or failures. 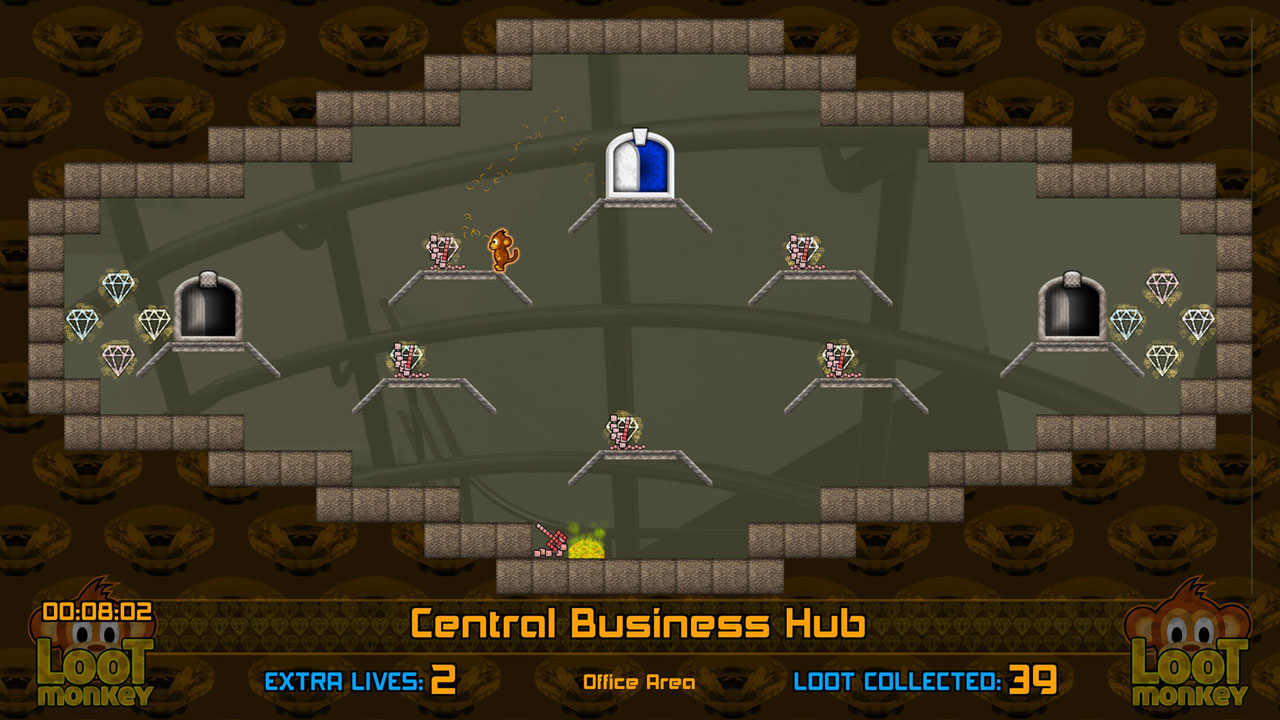 In terms of gameplay, I’d say Loot Monkey: Bling Palace did a good job. It definitely feels like something I might have found on older systems, and the musical soundtrack captures some cool, “Wish we had this when I was a kid” moments with solid synth background throughout. However, there are some optional elements that I HIGHLY recommend turning off before even getting into the game to keep you both in the moment and from growing to hate the game. Firstly, the Overlord’s voiceover. While you’re playing, you will, occasionally, get a jarring growl from the Evil Overlord Himself(?) to do a better job, that you’re doing a good job, or to just yell “MONKEY!” at you. This grating voice, while ideal for the overlord, doesn’t do enough in terms of exposition or narrative to add anything except for the fact that I don’t want to help this dude. Seriously, I already know I’m a worthless henchmonkey, but does the game need to remind me of that quite so strongly? But the Evil Overlord’s dulcet tones are nothing compared to the obnoxious, flashing, screaming death screen that pops up should you touch something you shouldn’t. There’s an option to change the game’s elements a bit, but I think that’s underselling what you’re actually doing: removing a goddamn heart attack in a box. In all honesty, please be aware and careful before playing the game: I don’t know if this level of sudden flashing could induce an epileptic seizure, and I don’t want to shop it around to my friends to find out.

There is clearly something going on here, and it’s apparent that Tackorama is very proud of the product they’ve created. With multiple difficulty levels that remove extra lives and even remove being able to find extra lives, plus the incentive to try to “speed run” the game, it’s this bizarre moment where I almost feel like the game is asking me “Don’t you know who I am?” But that’s the problem, Loot Monkey: Bling Palace: I don’t. With some pretty stocky animation for Dougie running around, bland and forgettable music, some traps that look like loot and a truly godawful death screen (to say nothing of the weird boot animation when you run out of lives), this is one of those games that I might only remember in the negative ways. I’m pretty sure this is one treasure that will remain undiscovered.