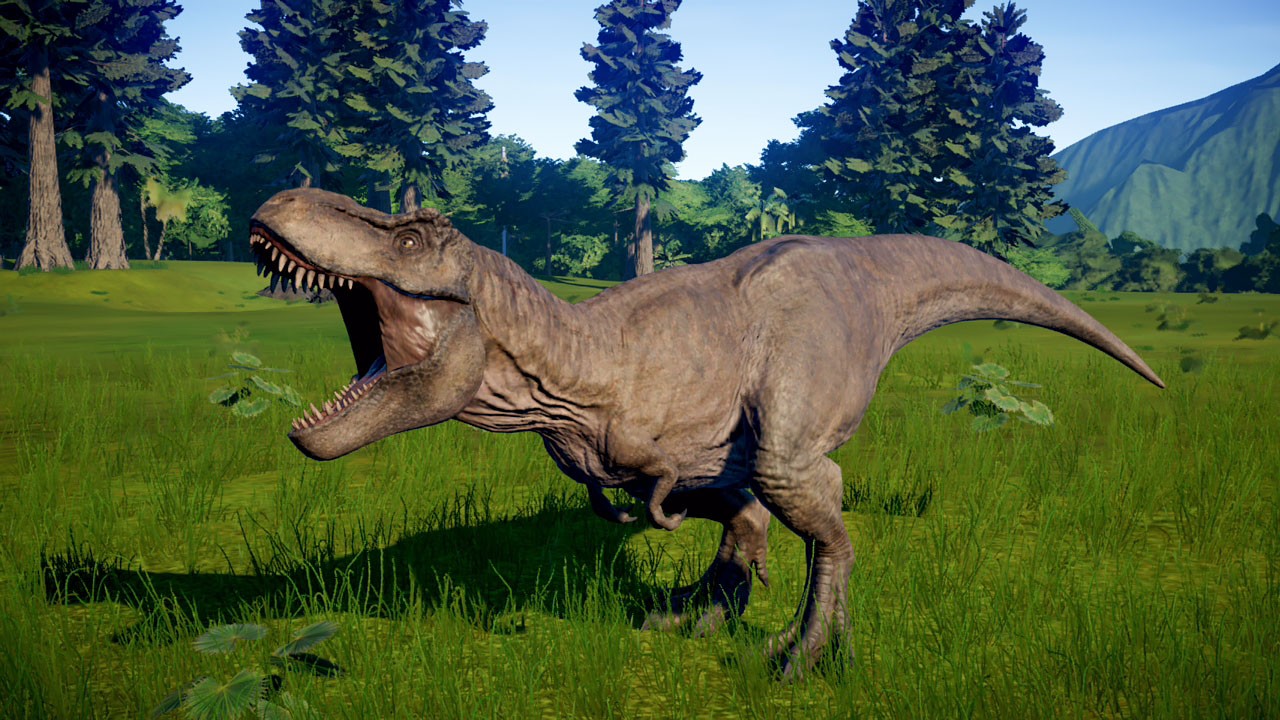 Evolution is far from perfect; it’s lacking the finesse and advanced nuances found in other Frontier management, Sim titles, but it packs tonnes of dinosaur melodrama that feels great on the Switch, even if it suffers from a significant downgrade on Nintendo’s portable darling.

I’ve always found it really odd that Jurassic Park has had a lack of park management Sims over the years – the only real standout being the under-appreciated Operation Genesis. Evolution attempts to rectify that, by testing your dinosaur breeding skills across familiar environments with plenty of challenges along the way.

If you’ve played similar games before, such as the Rollercoaster or Zoo Tycoon titles, then you’ll pick up the basics easily enough. Build suitable environments for your dinosaurs, manage your guests needs and complete challenges to further your progression.

The thing that most people will be here for is, obviously, the dinosaurs, and there’s over 60 here, including the DLC additions. Many will be instantly recognisable, from the hunkering Triceratops to the OG terror, the Tyrannosaurus Rex. Some, however, will appeal more to dinosaur geeks, but the majority feel unique, both in looks and through their character traits.

Building suitable environments is paramount to keeping your park running. Different security options keep your dinosaurs safely locked up from your visitors, but not managing your creatures’ needs properly can lead them to escape captivity, putting your guests in jeopardy.

To improve your finances quicker, you can complete challenges, ranging from; security missions to entertainment tasks, such as taking unique photos of your dinosaurs, or not having a dinosaur related death for a set amount of time. To be honest, challenges aren’t all that interesting, and you’ll find yourself doing the quickest ones just to get money flowing in as quickly as possible. 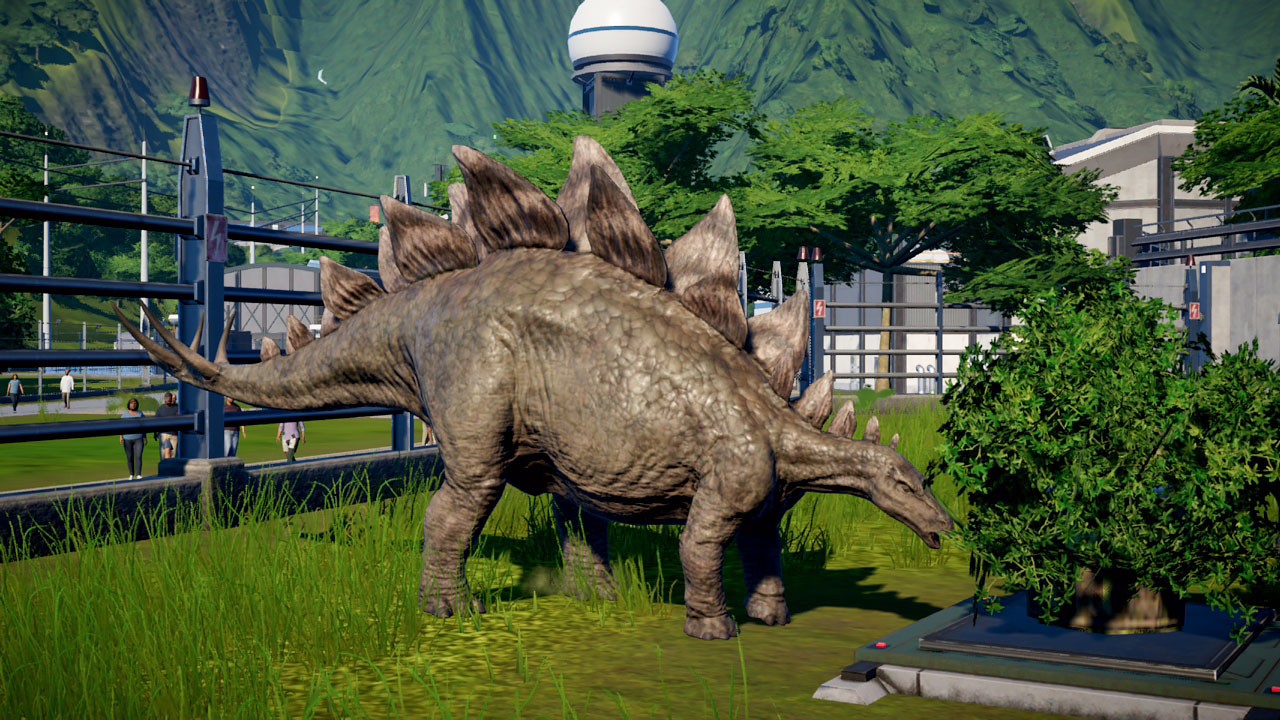 If you’re more interested in the park management aspects, then Jurassic World Evolution offers your typical buildings – such as restrooms, restaurants and gift shops, to more Dino-centric amenities like viewing platforms and rides that can be woven around your exhibits. There’s also a few purely cosmetic additions, like trees and signs for your park. Unfortunately, this is probably the least developed aspect of the game, and it’s frustrating that your ability to manage the guests’ needs is so restrictive. There’s no detailed graphs, you can’t pick individual visitors to see what they need, gift shops and restaurants only have one manageable item each; it’s very much a Sim-lite.

It’s a shame that the developers didn’t spend more time post-release fleshing out the management aspects of the game; for most players, there’s simply not enough here to feel like you’re in complete control. It very much feels like it’s aimed at the Jurassic Park fan, rather than the management Sim fan, rather than a healthy mix of both.

Having more money also allows you to send a team of intrepid explorers on missions to search for fossils to improve your dinosaurs genetic structure. Successfully improving genomes allows you to guarantee viable dinosaur specimens. You can also take a hint out of Dr Woo’s book, splicing Dino DNA to enhance your dinosaurs looks, as well as change their attributes to make them stronger or more resistant to disease.

Certain breeds of dinosaur are more picky than others, and having their requirements slightly out sometimes leads them to destructive behaviour. It’s great fun, watching Velocaraptors hunt park guests because they’ve managed to escape, but it can grow tiresome when they do it every few minutes because there’s slightly less greenery than they’d like.

The main cause of this is the size of the maps, which are often too small to house ample environments for so many species. It means you have to mix breeds together, and while on the surface, they might be compatible, if you look a little deeper, they might have slightly different preferences that can lead them to cause havoc; too much water might make certain breeds angry, but a housemate might prefer a watery, swamp-like home.

Evolution on the Switch is the most complete version of the game, sporting the base title and all DLC expansions. All three expansions add new dinosaurs, items and mechanics, with varying degrees of quality over the different additions. 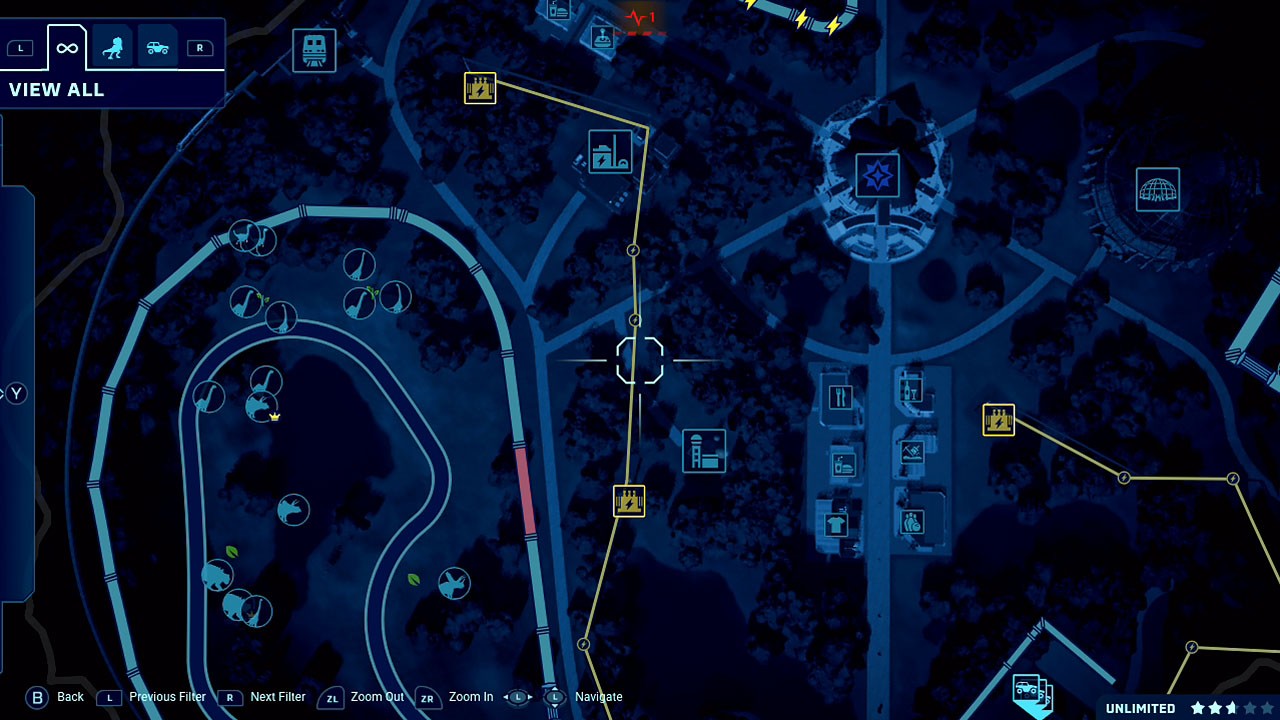 Claire’s Sanctuary is probably the least interesting DLC, adding Paleobotany and a greenhouse, expanding the feeding options for your dinos. It’s actually pretty fun, as far as gardening goes, growing new plants and ensuring they’re compatible with each dinosaur in your paddocks, but the campaign missions aren’t all that interesting, and the additional dinosaurs are entirely forgettable.

The Secrets of Dr Woo brings a series of bizarre, experimental dinosaurs to the game, and while they aren’t always exactly the most fitting in respects to the rest of the game (have you seen how ridiculous the Stegoteratops looks?), they’re super fun to breed, even if you don’t keep them around your park for too long.

The third DLC, Return to Jurassic Park is by far my favourite, least of all because it has the most additional content. I’ve talked at length in my PlayStation 4 review of how great this DLC, but hearing Sam Neil and Laura Dern reprise their roles from the first Jurassic Park still makes me giddy all these years on. There’s a great but short campaign, and plenty of additional content (mostly cosmetics, which are frankly, much needed across the game), making it the best piece of DLC by far.

The Switch version of Evolution is, unsurprisingly, the worst incarnation of the game. It’s by no means a bad port, but there’s a hefty amount of sacrifice to the detailed dinosaur designs. They sadly look blurry, as do environments, and while it’s marginally better docked when compared to handheld mode, it’s still a noticeable downgrade. I’ve played the game on PS4 and the Switch, and while I’d happily pick the Switch version for the perks of portability, I’d hands down go back to my PS4 copy if I’m after some serious park building.

Unfortunately, it’s not the smoothest transition from PC and more powerful consoles to Nintendo’s flagship either, and there’s some serious lag when your island starts to fill up. It’s not enough to make it unplayable, but it’s enough to make you feel pretty disappointed, especially when the frame rate dips well below what you’d expect, even for the Switch.

If you want a simple, easy going park Sim that stays true to the Jurassic Park universe, than Evolution is a great start. It is, however, the poorest incarnation of the game, so if you have other means of playing, I’d recommend picking this up on another system.

An above-average park builder in its worst iteration, Jurassic World Evolution on the Switch is a decent game in its worst form.