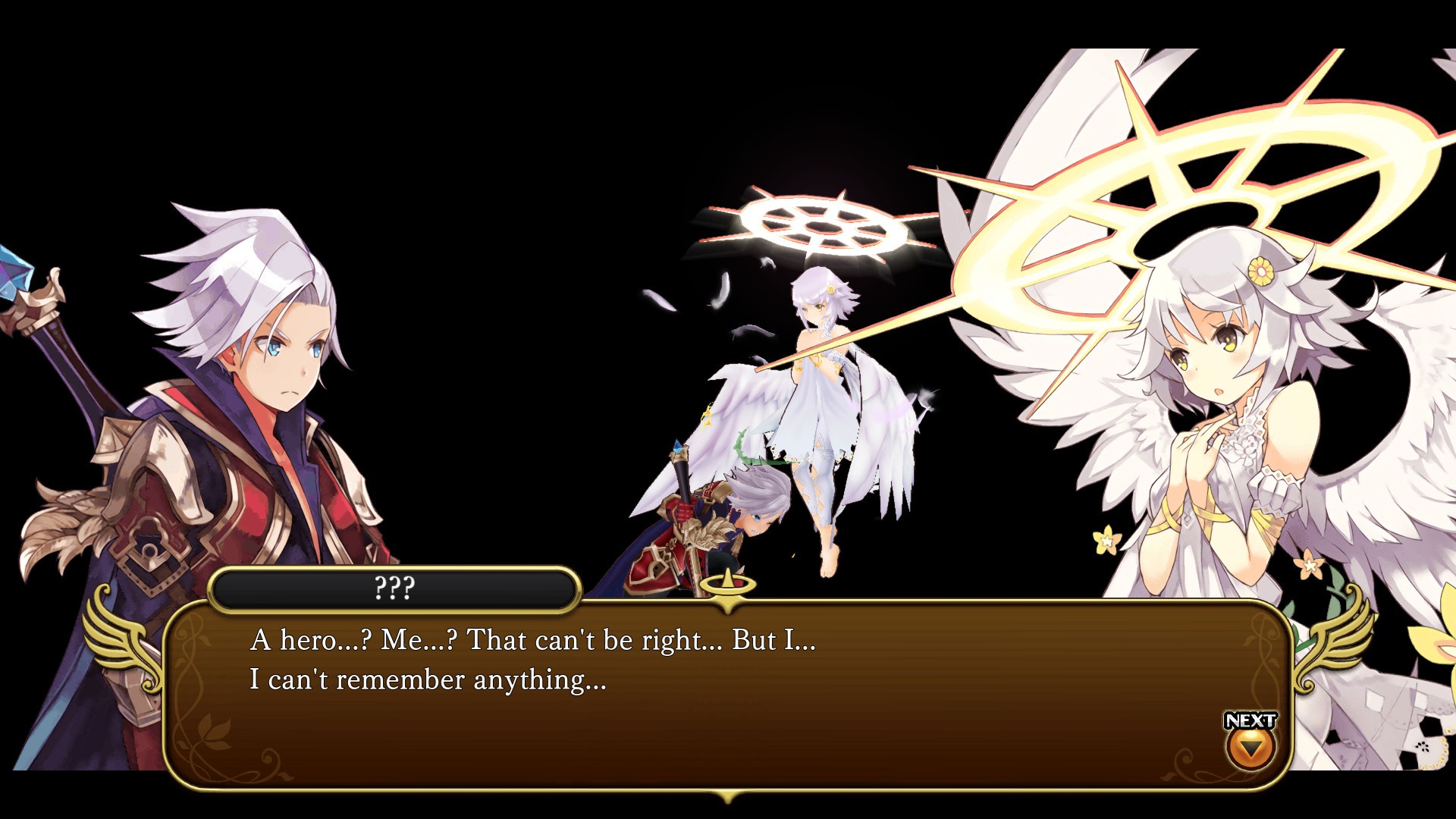 For so many games, the idea of death is one that is handled with a very bizarre dissonance in terms to the life of a game. When I was growing up, characters dying was easy because they were incredibly one or two dimensional; a lot of detail regarding them wasn’t injected because there were both hardware and storytelling limitations. When things like Final Fantasy IV finally crossed my path, I was relieved to find out there was technically a way to resurrect the “dead” characters who were lost along the way. Having General Leo die in Final Fantasy VI was hard because he was a genuinely good character murdered by a madman, but, ultimately, he was a side character. It was something like the death of Aerith that finally shook me up. I spent way too long investigating fan theories and rumors about being able to bring her back to life, that she was supposed to be there but Square Enix did a sloppy job localizing the game and cut her out, all sorts of nonsense. The truth was, a great character was killed when no one expected it. It was the first time something like that hit me in a game, but it wasn’t the last.

With Hero Must Die. Again, players are thrust into a bizarre situation. In this game, you’ve already done the hard part: the hero, whom you can name whatever, has just slain the demon, Guile, that was threatening the world and your beloved. In the final battle, you defeated the demon, but at the cost of your own life. You will be remembered as a hero and a martyr forever. Yet your time not his planet isn’t over just yet. You see, the Divine has decided that you have five days left on the mortal plane to tie off any loose ends you may have. And the one that’s at the top of your list is to find your beloved and impart your affection one last time. Problem is, the brief time you’ve spent in the afterlife has sort of slogged up your brain, so you can’t exactly remember where or even who she is. Nevertheless, you’ve been given five full days with perfect weather and sunshine, and you can use them however you’d like to best cement your final legacy. But time is against you: the power of the Divine is amazing, but it’s not perfect, and you are ultimately racing against the final boss; the finite that is life. 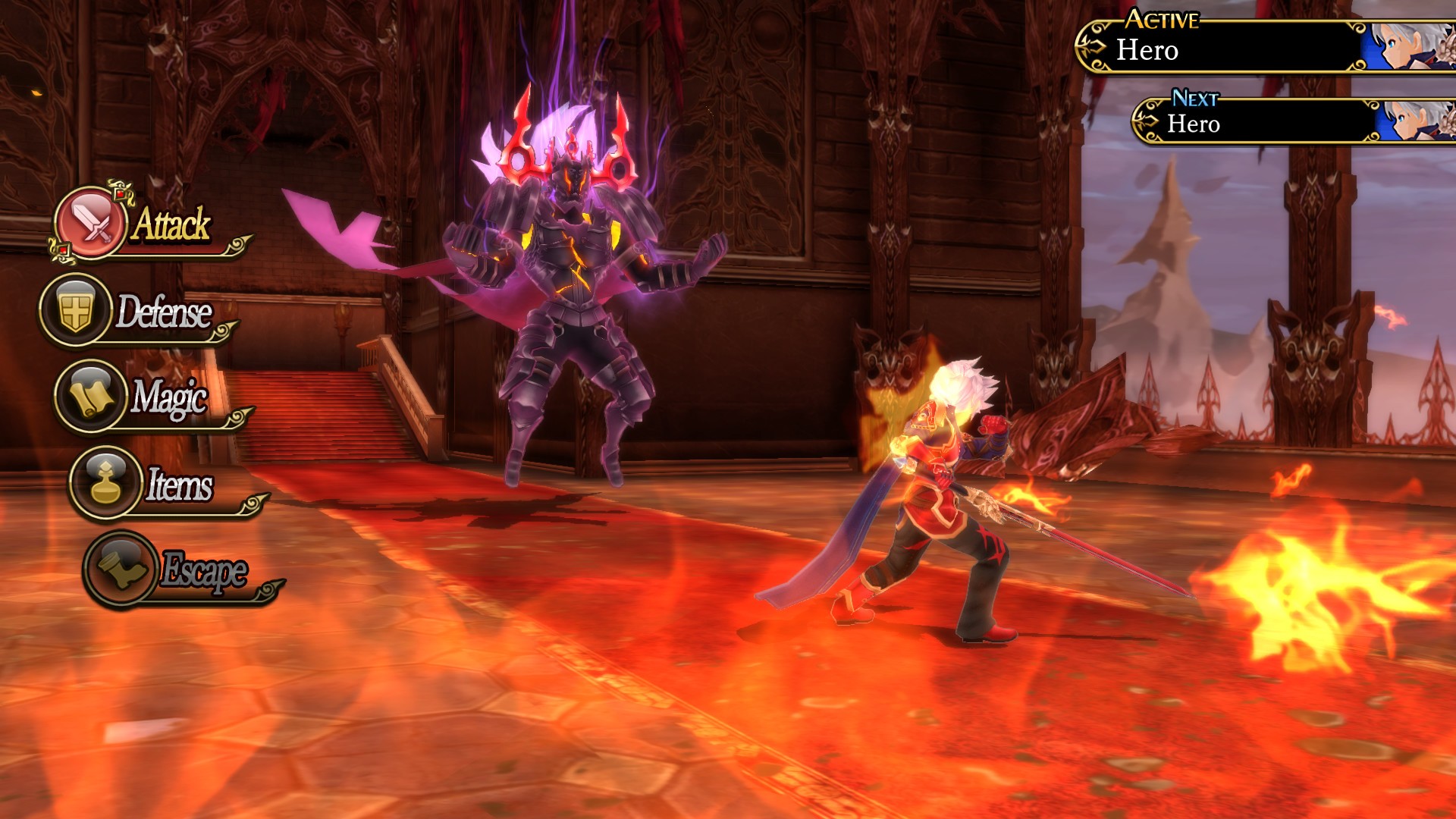 From the beginning, Hero Must Die. Again is a very odd duck of a game. You start off as a very powerful, incredibly wealthy character, and you can set off in basically any way that you choose. The map is limited in paths but the way to approach the different towns, dungeons, wastelands or forests are open to you, and you have five full days to go as you please. In this time, you’ll forge and remember different relationships and friendships you had, as well as carving new paths for your legacy. There’s a town that’s suffering from polluted land and water, and perhaps you can help purify things for them before you shuffle off. The church is looking to rebuild itself after suffering catastrophic damage. A mercenary that you once fought alongside is showing his colors as a sell sword and wants to prove that he’s better than you before the opportunity is lost forever. All of these choices exist in every incarnation of the game, in different facets, and you need to make decisions as to which of these things you’ll be chasing up. Are the nature orbs you find better suited for cleansing the dirty town, or for protecting the hidden nature village? Will you side with the mage who was once your companion, will you accept the fellowship of an archer who clearly carries a torch for you, or will you go alone as best you can? And where, oh where, has your beloved gone?

Hero Must Die. Again is a tough chestnut to crack, but it is rewarding. First and foremost, the timer thing really hampers your ability to fully explore the game in the way that you’d like. As you traverse and move, your body can and will succumb to fatigue if you don’t rest and refuel regularly, and that means you do terrible in combat and forget spells. However, there’s also the matter of your character degenerating over time regardless because, well, you’re basically undead for five days, and time is a factor. You can use money to help cover the travel distance, but cash is limited unless you spend time fighting monsters, which gradually grow more difficult the longer you’re alive. You simply cannot help everyone all at once, so you need to decide, early on, where you’ll be placing your efforts, and focusing on them. It can be rough because you might not even realize there’s an avenue for your actions until you’ve already used up three days, and then you just have to plan to try again the next time you play. And players will want to try again, because there are, I’m not exaggerating, fifty different funeral endings that you unlock, each one briefly mentioning that you saved the world before enumerating everything you did after that moment, and different people speaking on your behalf. These eulogies are surprisingly touching and memorable, so having different characters join you in each run is worth the effort.

The best and worst thing about Hero Must Die. Again is the tonality, and I’m not sure if it carries through the way that this remastered version would like. See, the original Hero Must Die was a mobile game that was on the cellphone in Japan that was done up with 16 bit sprites, which is one of my favorite ways for RPGS to present. It’s also the way that we see games with more depth, like Lisa the Painful or Corpse Party (the original) deliver their storyline. The Again version has some beautiful new sprites, avatars and 2.5D rendering, but then it feels almost a bit distracting from what’s happening. The fight scenes look good and have a traditional turn based setup, but that’s not really the point of the game. Nor is the fact that all the female NPCs are very chesty and underdressed (except the nun), because, remember, you’re looking for your beloved AND YOU’LL BE DEAD IN FIVE DAYS. I think that the remaster is great for adding more options, a better map and better looking towns, but I almost feel like DEGICA and Pyramid would have been better in putting that creation budget into more dialogue trees and more interactions with the townsfolk. 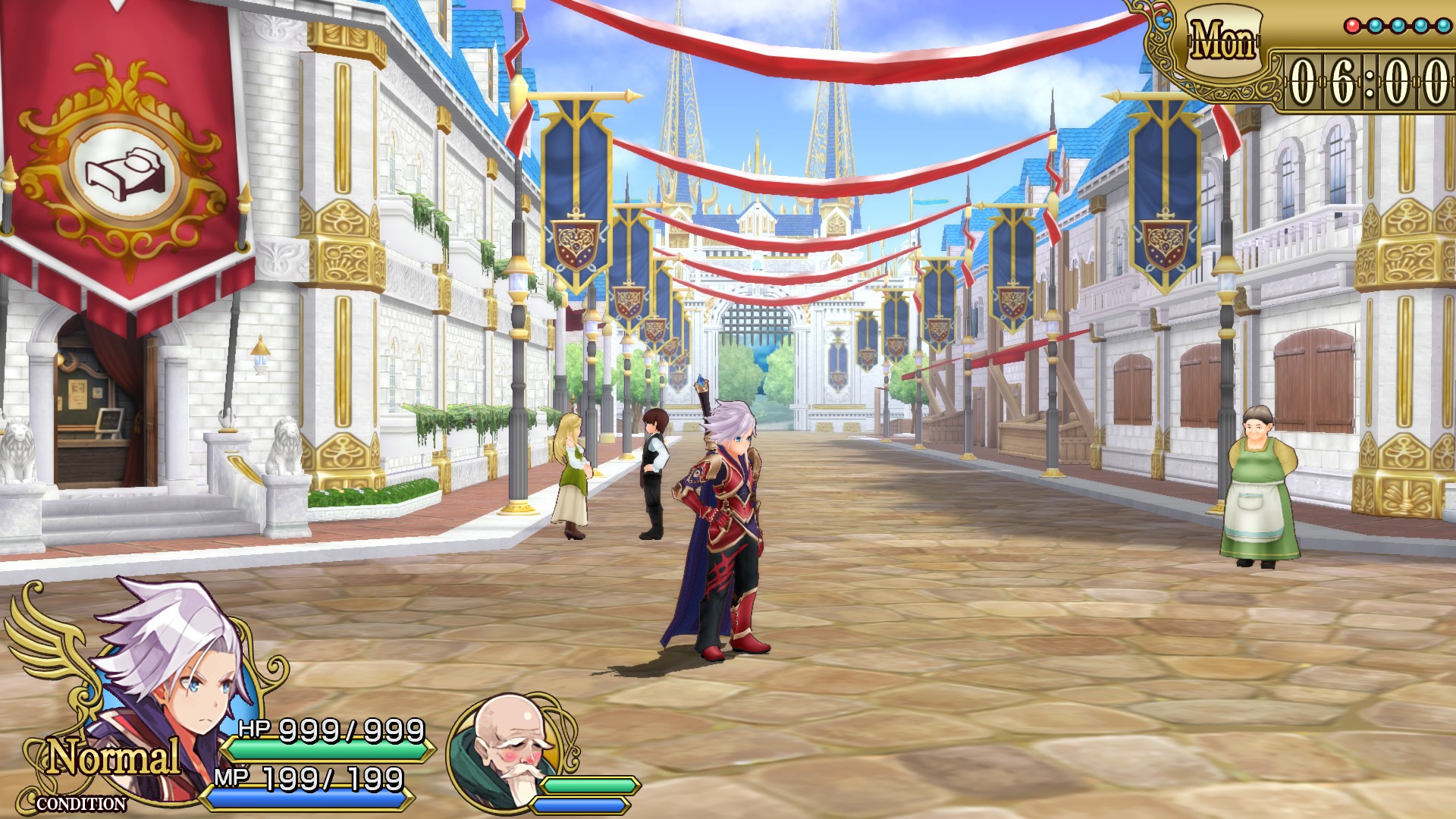 But there is something about Hero Must Die. Again. I compare it a lot to another indie game, To Ash, where you’re faced with a similar degeneration of the hero, but in a much different way. To Ash was focused on turning the mirror on the player, making them think about the loss of youth, the way that time slips through our fingers and, in some ways, the futility of life and remembrance. Hero Must Die. Again takes this in another direction, showing that a hero can do more and show more to become a part of a people’s personal history, about how the actions we take in a short amount of time can have effects that last forever. It’s lighter than you’d think, with small jabs of humor and almost satirical moments of RPG tropes in a game that’s anything but tropic. You suffer under the weight of yourself, but you do so with a frenzied excitement, having all the trappings of an RPG around you (decent soundtrack, some great item finds, a couple good dungeons), but it all seems inconsequential to making sure you can help out one more person, provide one more point of positivity to someone who needs it. It feels like the perfect RPG for a person who doesn’t like going down the same roads and would like to try their hand at an approach that has merit. Hell, it’s even for someone who enjoys the timer setup of the Atelier series, but would prefer there be more dire consequences if they aren’t able to make it in time.

I don’t know if I’ll revisit Hero Must Die. Again. It was very compelling, and it did a lot to keep me coming back for more, but I don’t enjoy having to see my own funeral over and over. Yet it really was an experience that made me feel more kinship to a game than any have in recent memory. It’s bittersweet without being melancholy, it’s exciting without being nerve wracking, and it really does give you the lingering idea of “what if I tried it a bit differently?” If you are tired of the same sword and sorcery routine, and want to see some medium length gameplay coupled with a ton of replay enticement, then come and bear witness to the last days of the greatest hero of all time.

An unusual game that helps you lean into existential crisis with a bit of softness and warmth; don’t let your first death be your last in this offbeat adventure.