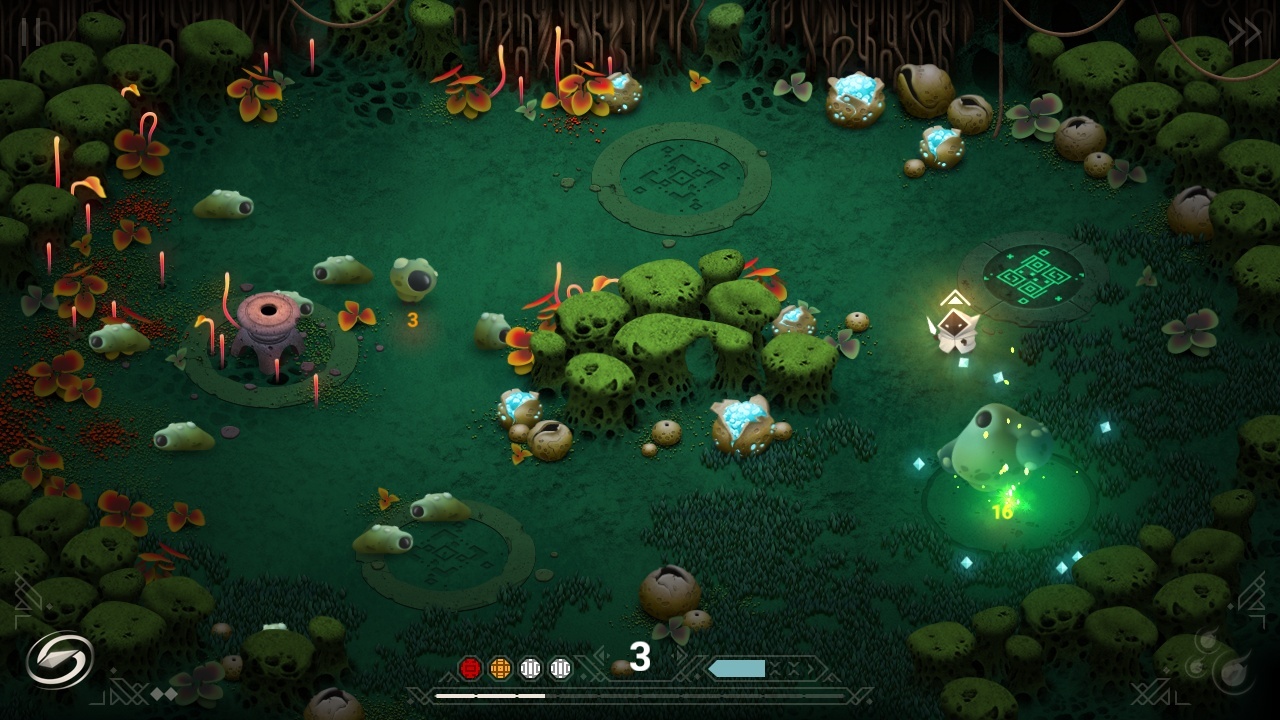 Role-playing games can come in all manner of shapes and sizes. You’ve got the behemoths with hundreds of hours of gameplay, sprawling third-dimensional landscapes and more weapons than you can shake a sword at. At the other end of the scale, you’ve got 2D side-scrollers, textual adventures and isometric viewpoints. You’d pretty much think that every avenue of possibility has been explored or incorporated into every role-player in some shape or form. However, think again, as just when I had thought I had seen it all, along comes Hexage’s Ritual: Sorcerer Angel as it spells a release onto the Nintendo Switch.

Before we touch on the uniqueness of this title and its playability, we’ll delve a little into the story behind it. You play the role of a Sorcerer Angel, who through the ritual of a cult, find yourself trapped within the body of a human. However, before the sacrificial rites, you manage to escape the ritual where you embark on a vengeful journey to hunt down the cultists, destroy their gods and purge the world of their order. Instead of embarking on a journey of exploration, the game plays over a series of levels, with the narrative being pushed along through a series of static stills between each level. In large, the story plays more of a back-role within the elements of the game; usually detailing some reason or another for embarking onto the next level.

The main bulk of the gameplay involves traversing a series of locales that are presented in a 2D-style of dungeon, or arena. Viewed from an overhead trajectory, your task is to kill all who inhabit the area, whether it be monsters, cultists or demons. Once you begin moving, your directional input being from the left analogue stick, the area begins to fill with the bad guys. Armed with a melee weapon, you simply walk up to your foes and combat is automatically played out; sometimes taking a number of strikes before the foe is extinguished for good. However, you can also utilise a number of other functions; some passive, some progressive, whilst others are continual or activated through pressing either the A or B button. You can also adjust your movement speed with ZL slowing you down and ZR speeding you up. 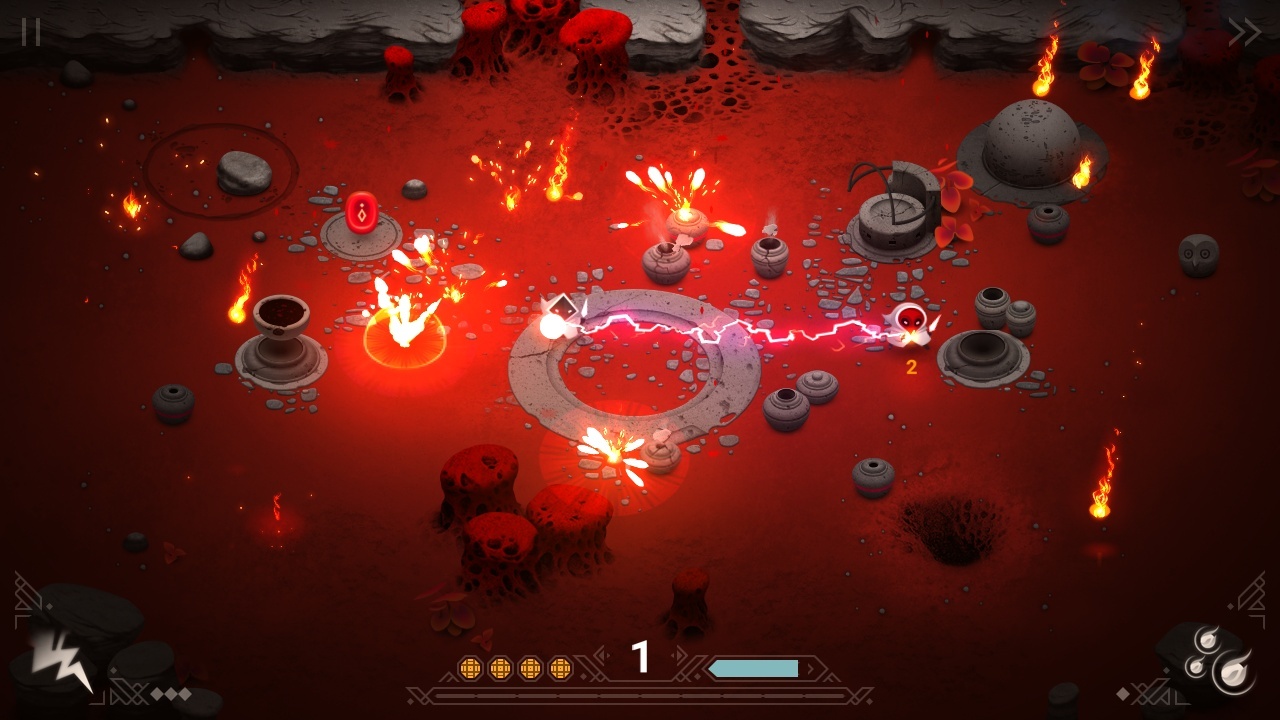 As you go about your business, slashing up any nearby foe, you can also cast magical spells, activate orbs that can appear within the level and make use of secondary functions. You can map specific functions to the A and B buttons, with one being offensive and defensive, or even both being mapped to each key. There are a number of spells from fireballs to ice blasts, curses and lightning strikes. You can even surround yourself with an orb that shields you. Hidden throughout each level, coloured orbs can also grant you extra firepower from fiery walls to multi-way spikes and bouncing bombs. There are literally all manner of weaponry that can be utilised, as well as a number of special abilities to give you the edge.

As you progress through the game, you unlock further enhancements that can be equipped. In fact, there are hundreds of different combinations that you can equip which grant bonuses such as healing, adding stun to attacks, cursing enemies and attracting the mana resources needed to fuel your magical abilities. It’s in this mechanic where a lot of the fun of this game resides, as you experiment with different loadouts and techniques to give you the offensive or defensive capabilities you need to succeed. You’re going to need such an extensive arsenal too, as each of the levels soon teem with hundreds of enemies types. In some ways, the game plays in a similar fashion to a good, old-fashioned shmup, or shoot-’em-up. Bullets and magical spells spray everywhere, some of which are thoroughly pleasing to the eye as they fill the level with your destructive prowess.

Although the game starts with only a limited loadout, as you progress you unlock more and more variants, until choosing your next loadout becomes a difficult task as you swap out certain abilities in order to find the most successful combination. Need more mana? Equip a spell that allows you to do that. Want to curse monsters that attack you? Again, just equip it. The majority of spells are passive and continuous, such as warping to another monster upon successful extermination of another. In fact, you only have direct control over two of your main spells, namely your offensive and defensive capabilities that are mapped to A and B. This creates an easily accessible game with a control scheme to match. 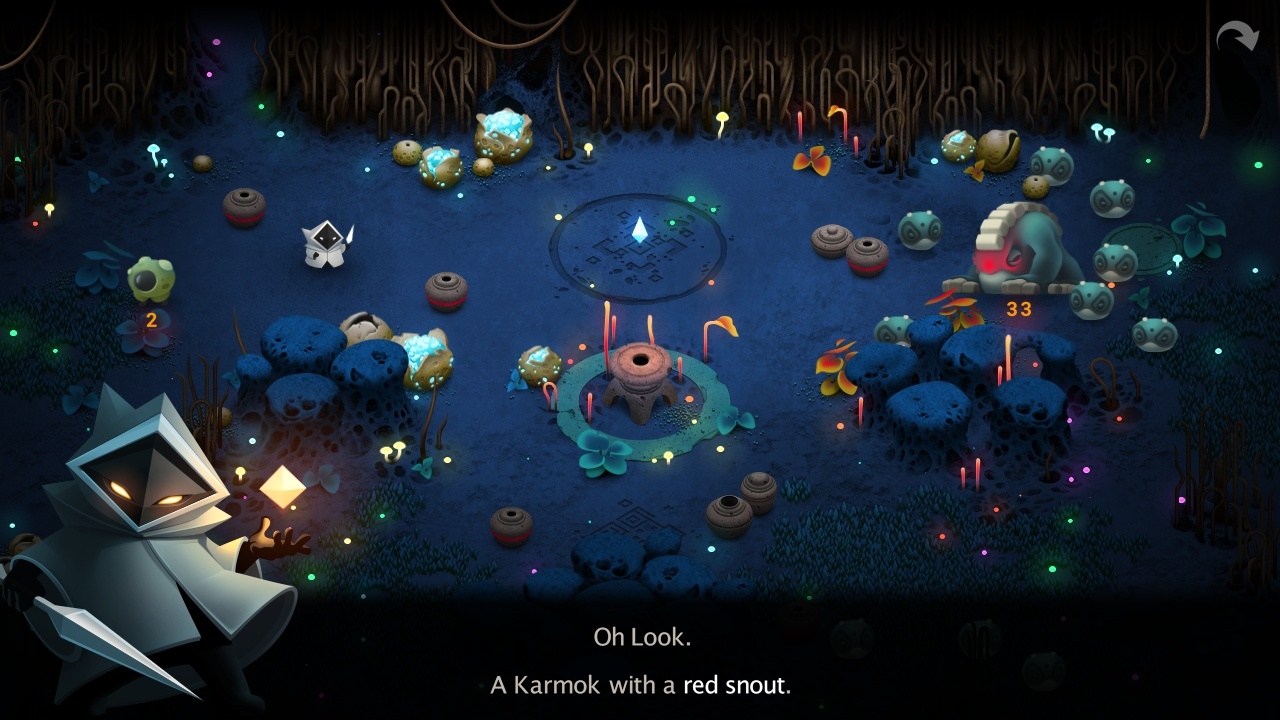 In order to provide a challenge to each level, some foes are also capable of casting similar spells to your own; again, making this a game that feels very similar to the bullet-hell of a shmup. However, it isn’t long before you begin to face larger foes, some of which require quick-thinking and dexterity in order to overcome their threat. As you defeat enemy types, you gain experience levels that is denoted by a numerical value underneath your character. Some of the larger foes also contain a similar number, more often than not, with a level that is significantly higher than your own. Should you come into contact with such an enemy, then you lose a life. However, by avoiding them, casting your ranged attacks upon them and enveloping them in your magic, you begin to either grow in your own level, or start to reduce theirs. Once your level is higher than theirs, then you can go in for the kill and destroy them. Be careful though, as every time an enemy hits you, you can also decrease in level values.

Once you have defeated enough of your foes, or expelled a certain type of enemy, then a portal opens up within the level; giving you an end-level escape and an advancement onto the next level and following chapter of the story. It’s a very simplistic style of game, but one that contains a deep level of gameplay. There’s a certain level of charm that makes the game a joy to play, especially if you’re a fan of shmups and role-players, and contains that addictive quality of one more go, or one more level. The constant reward of new spells or upgraded versions, plus a satisfying number of levels, replays and a new game plus, ensures that there is enough within its basic framework to keep this an interesting game over the long-term.

Overall, Ritual: Sorcerer Angel offers a unique take on the genre of role-playing. This isn’t necessarily a game about the journey, but is more about the gameplay and the number of options available to you; from choosing loadouts to how you deal with the countless number of enemies that fill the screen. If it has one down-side, then it has to be that sometimes it is difficult to keep track of everything that is going on on-screen, but if you’re used to playing shmups then this will soon feel second-nature to you. It has a tiny file size, under one hundred megabytes, yet contains an abundance of gameplay that forces you back in time and time again. It’s fun, it’s unique and it takes up next to nothing on your memory card. So, if you think you’ve seen it all within the world of role-players, then give this game a look. You’ll be surprised with what you’ll find.