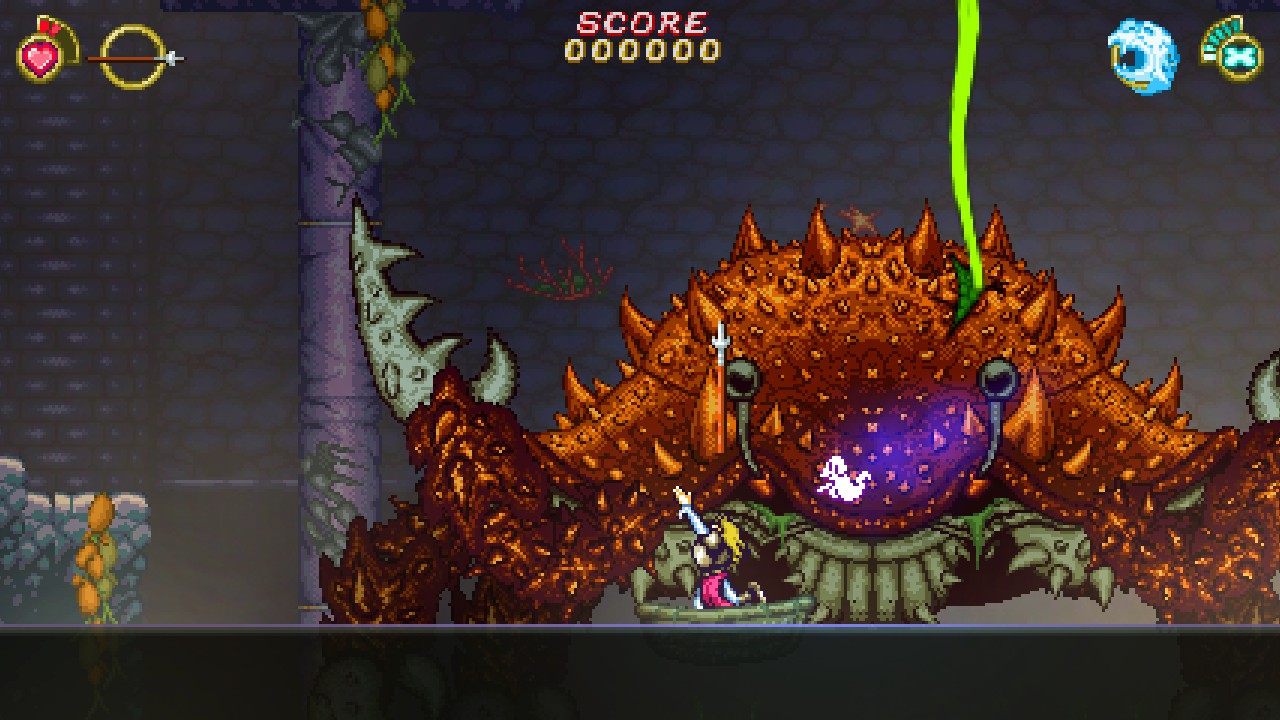 Passion projects are such a difficult thing to fully gauge and understand. When it comes to something that people intrinsically love and worship, regardless of quality, they tend to be ignorant or impervious to criticism. Take famously bad movies that have rallied a cult behind them: they accept the flaws of the film without actually considering how it could be made better. When it comes to Kickstarter, there can often be the same situation unfolding before the backers, as they try hard to lock out any negativity so they can justify their invested money and time. Still, there are natural moments when you need to face the music, and here is one such roadblock. Battle Princess Madelyn has so much potential that, at least on the console, appears to be wasted.

Madelyn is a little girl who happens to be sick in bed when her grandfather comes to read a story to her. She’d rather play a Minecraft knockoff instead of listening, but grandpa wins her over by mentioning that the main heroine has the same name as her. If this sounds a bit too Princess Bride, strap in, it gets wild. Madelyn is the princess of a kingdom under siege, and she has to watch as her beloved dog gets killed, then comes back as a ghost. She’s not a sit-around-and-get-rescued princess: Madelyn is going out to right wrongs and bash heads in. Along the way, there’ll be treasures to find, people to help, quests to fetch and big bosses to spear to death with little to no hesitation. Madelyn’s got a long journey ahead of her, but hey, she’s a princess. She’s got this.

It’s important to note that the tale of Madelyn exists as both a story mode and an arcade mode, with merits and shortcomings on either end. On the one hand, the arcade mode is more on point towards the gameplay style and message of the developers, who are seeking to emulate and capture the Ghost n’ Goblins gameplay. You’ve got large, scrolling levels filled with platforms, pitfalls and enemies that seem to come out of nowhere. You’ve got unlimited spears to chuck, but you also are hamstrung by a slightly limited jump and, moreover, only taking two hits to end up dead. As you get further along in the game, things do get better: Madelyn unlocks the ability to double jump, and her weapons get cooler and more varied, including my personal favorite, a triple set of massive throwing knives/swords. But the difficulty remains the same, and you need to understand there will be times where the game feels straight up unfair. 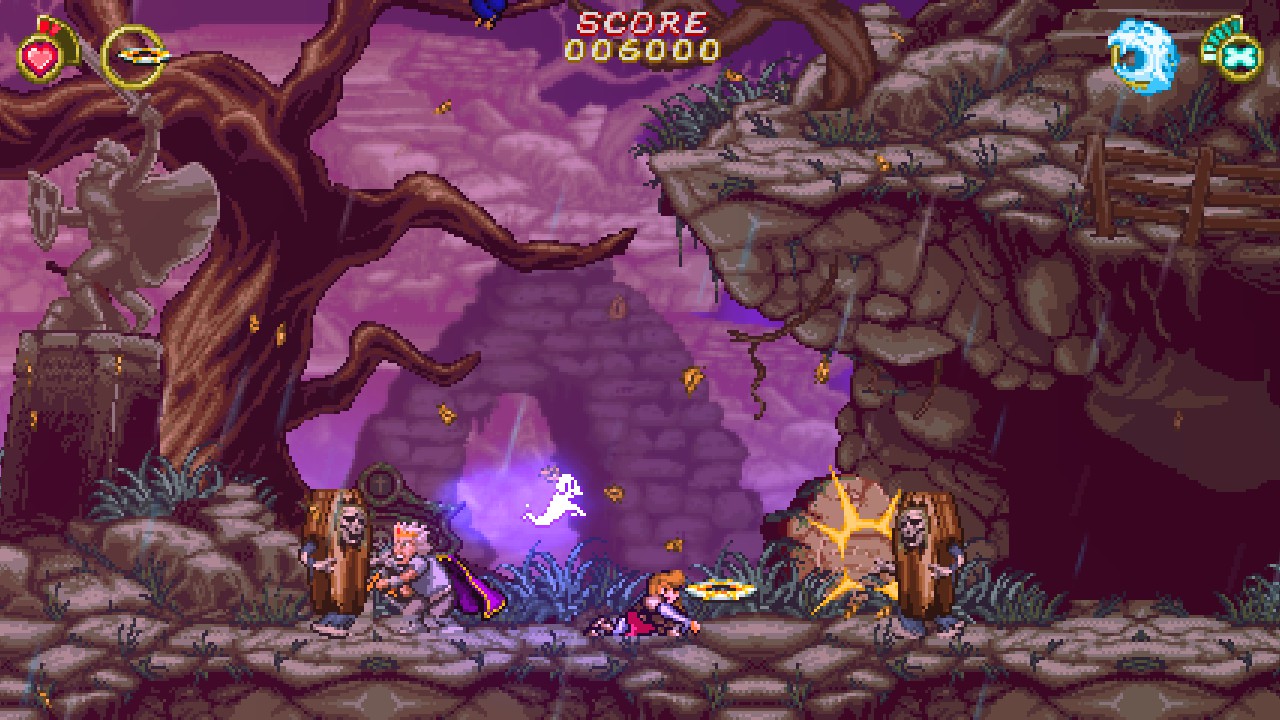 Firstly, you will want to do story mode. It just makes more sense and makes for a better progression in terms of reward in gameplay. Arcade mode is definitely the sweet spot for folks who are still enamored with the SNES generation and the arcade experience, but it also is a little flat in comparison. You get stronger and get better, but there’s not the drive that you might find in the main story mode, which is filled with heart, genuine sadness, and a couple of hilarious one liners. I loved the way that Madelyn seemed to constantly be attempting to buck the trends of the helpless princess at every turn, even though, simply by existing, she’s standing in defiance of the ideas. For God’s sake, she has a ghost dog, a suit of armor, and she’s busy slaying the undead, massive monsters and even undersea helmet fishes. What else can you do to make people stop seeing the fact that you’re a girl?

Story mode also does incorporate the incentive to explore more and double back in order to reap the rewards of your successful adventuring. Madelyn can get a lot of sweet upgrades and loot from townsfolk for finding their lost stuff, defeating bosses and generally being a good princess. The scale at which you get bigger and stronger is a natural slope, allowing you to slowly step into the light and become the hero that we all know Madelyn can be. Granted, if you never did any of these quests, you could still progress well, but it wouldn’t be as much fun, nor would it make sense to punish yourself through story mode. If you just want to kick butt and jump around like a mad knight, then do arcade mode. It’s more challenging, but it’s also faster and has the drive behind it to make it to the other side of adventure fairly quickly.

Now, the caveat as it comes currently is the fact that I played the Switch version. I understand there are some limitations and problems when it comes to porting a game to a console, but there is also a certain expectation of quality when the game is almost ready for release. The pixel graphics, which are the cornerstone of Battle Princess Madelyn’s design, look delightfully dated and nostalgic in trailers and on the PC, but they’re honestly blurry and ill-defined throughout. There’s a lot of tattered edges on sprites, backgrounds and the animation alike, as if you’d taken the object from another picture and simply stretched it out in Photoshop without bothering to fill in the blanks. This carries over even into the Switch’s icon, which shows a stark white box with Madelyn awkwardly dropped in while her logo floats in the background. The game, straight up, does not look good, and, instead of catering to the crowd that enjoys retro graphics, it drives me to yearn for updated designs and formats.

Additionally, the game doesn’t feel like it’s totally done. When you walk into the castle in the first village, you have an opportunity to see a collection of dolls and masks that represent both Kickstarter backers who contributed and some various items that get collected and unlocked throughout the game. Entering here brings up a weird mouse icon that you control at the same time as you control Madelyn, leading to some massive confusion. This spills out of the castle and into the main game, where the hitboxes never seemed quite right for a majority of the enemies. When you advertise something that has “Dark Souls” like difficulty, you need to be tight as a drum so you can justify some serious dodge rolling and quick thinking. Instead, it took me back to a time when mashing the attack button as fast as possible while praying that I didn’t get taken from behind by a ghoul that I had missed was my go-to strategy. In that sense, I suppose Battle Princess Madelyn succeeded in making my childhood come back to life, but certainly not in the way that I wanted to remember things. 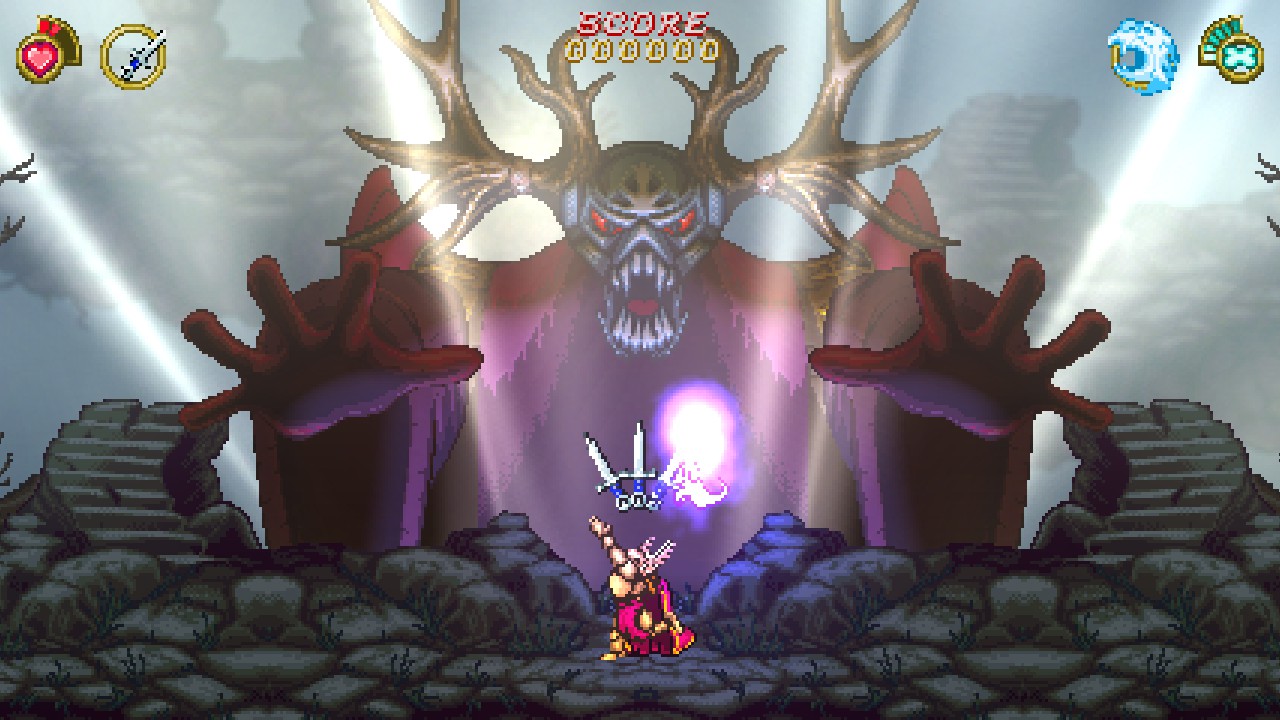 It really isn’t all bad, there are some serious shadows cast over this game. The soundtrack is wonderful, and I love the option to toggle between orchestral and traditional digital, but it’s not enough to distract from the wonky animation that feels less “VHS transfer” and more “streaming at 240p.” The game is legitimately hard, and there is plenty of replay value at hand in terms of accomplishing all the quests and finding all the secrets, but it’s something you really need to sign on for, and, in the current Switch form, it’s not something I’m committed to wanting to do. As a passion project and a vessel to deliver some standard ideas – strong female protagonist, retro gaming, modern genuflection to the classic – it definitely delivers. As a game for anyone to simply pick up and play off the digital shelves, however, it doesn’t get there.

The final nail for me comes in the form of how Casual Bit Games is currently addressing the situation, by relying on future patches “to make the game even more brilliant” that will come from gamer feedback and a special FAQ addressing this. This screams an admission that the game isn’t ready, but that it’s been delayed long enough (the original Kickstarter target was February 2018) and they’ll deal with further bugs as they come. Steam might be able to patch things on the fly, but the Switch is a different beast altogether, with long downtimes as the patches are checked for quality and content. This means we’re expected to, as Switch owners, simply be okay with the game potentially underperforming, on the basis that we get to police the bugs and errors and report them for fixing. I understand the mentality, especially given the fanbase, but I hate the execution, and the implications that console fans will simply be alright with a busted game because now patching makes it possible to eventually mold it correctly. For me, Battle Princess Madelyn might eventually become a great game to play, but, for now, it’s middling at best, and good luck to the loyalists who want to stick around until it’s perfect.

I really wish this article’s thumbnail could be the game’s thumbnail, but the Switch’s bleary, stark icon is a poignant representation of what lurks inside.