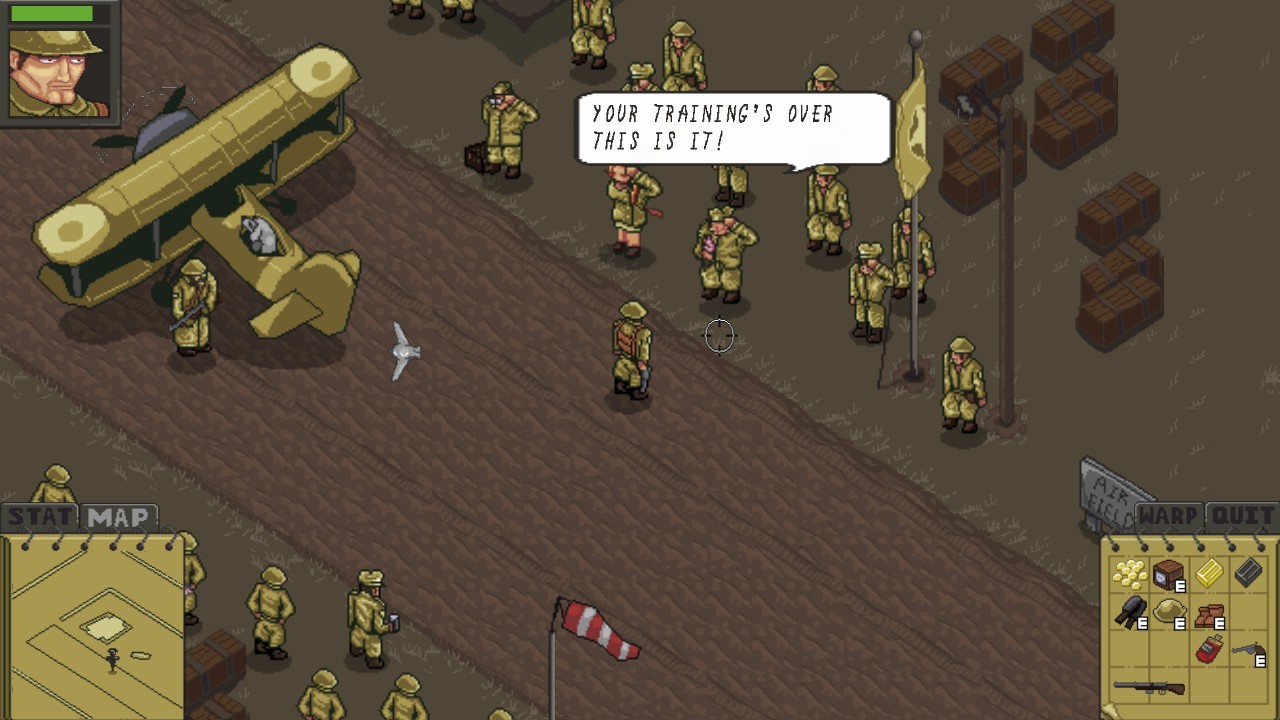 Right, before we start. No, this isn’t a game that involves flying a space fighter through trenches, or battling space stations that aren’t moons and you’ll certainly not find any exhaust ports in which to launch your proton torpedoes at. I would forgive you for thinking that though, as the title could suggest otherwise. In fact, what this game is about, is war. A World War. It can often be a difficult subject to deal with when it comes to video gaming, with most games of its type opting for a very gung-ho approach that, in some ways, glorifies human conflict. However, Retro Army Limited have opted for a completely opposite approach, one that will have you crying. Not in sadness, but in hilarity as Super Trench Attack fires a release onto the Nintendo Switch.

Developed by Retro Army Limited and published through Storybird and Pixelheart, this parodic look at the conflict of war, charts your career as a foot soldier within the ranks of the Green Army. With your country being invaded by the Black Army, Super Trench Attack sees you enrol in Boot Camp, take on the fight to push back the advances of the enemy and infiltrate behind enemy lines to take down the enemy once and for all. However, with its comedic values that are reminiscent of the British television comedy, Blackadder, and a very retro approach to presentation and gameplay, you’re left with a game that is the complete opposite of being at war: Fun.

Presented in an isometric view and with the charm of pixel graphics, you begin life as a new recruit training at the Green Army’s Boot Camp. Once you successfully pass out, or work your way through the game’s tutorial, you then embark on a series of missions, sixteen in total, that takes place on an open-world setting of four expansive maps. Set within the framework of a twin-stick shooter and role-playing game, your mission briefings and the story’s narrative is presented from the commanding officer of your HQ. Your task is then to proceed to the mission waypoints, complete your objectives and return to base, where your CO then presents you with XP and monetary rewards with which to build up your characters and purchase supplies, such as uniforms, first aid kits, ammo and traps. 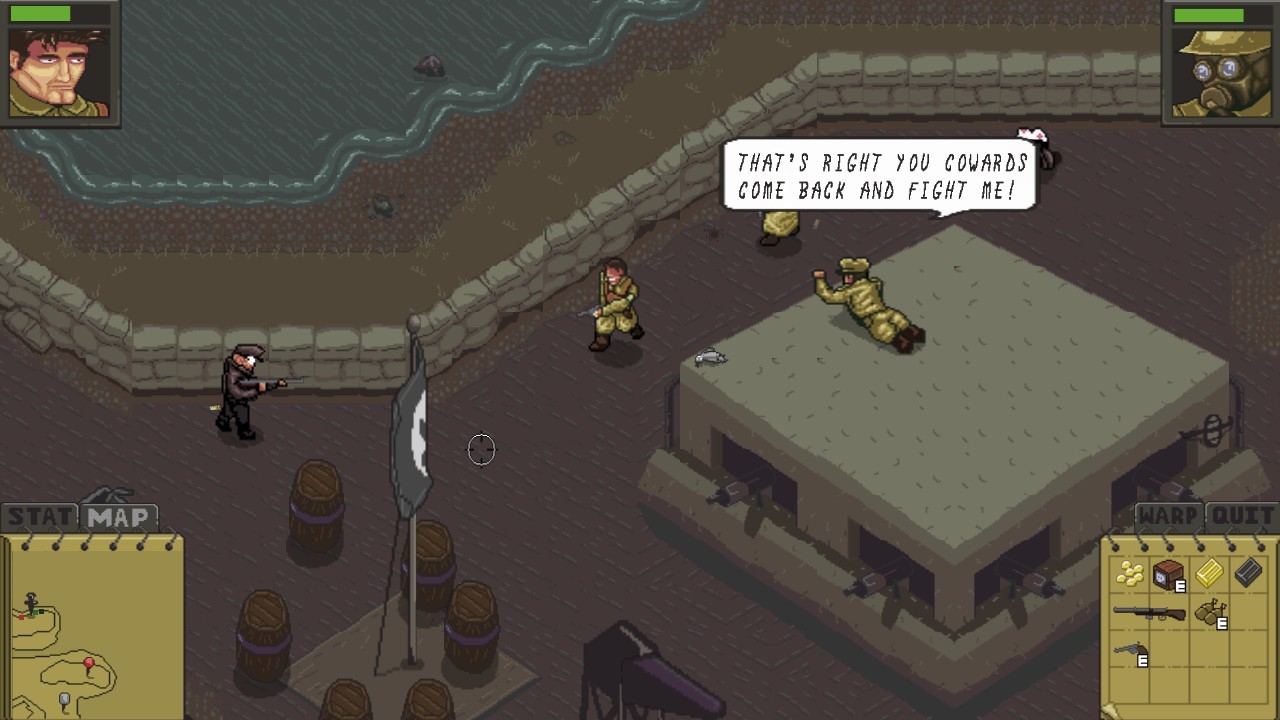 The main bulk of the game consists of running a series of sorties. With its twin-stick mechanics, you control the movement of your character with the left joy-con, whilst the right joy-con controls aiming and direction. Presented with a series of waypoints, or homing pigeons, to your objectives, you must make your way through enemy-held environments towards your mission targets. By aiming an on-screen reticule, you can shoot your pistol or rifle with ZR or throw grenades with the R button. Aim your reticule on the enemy’s head and you’ll score a headshot, aim at the feet and you’ll shoot the foot. By clearing the way of enemies, you then proceed to your objective and destroy, kill or blow it up. These can range from destroying comm towers to taking back key locations or taking out certain generals of the Black Army.

However, to add a mix to the proceedings, some stages of your missions present you with a more ‘first-person’ perspective; one that is reminiscent of the light-gun styles of play, such as Taito’s arcade hit, Operation Wolf. These sections of the game mainly revolve around some of the boss battles that you come across, but some also require you to clear the area of a number of hostiles. One area where the game really shines though, is in its comedic values. Some of its humour is laugh-out-loud hilarious in its presentation; not just within the narrative, but also visually through cut-scene imagery and certain antics as you progress through the open-world settings of each level. 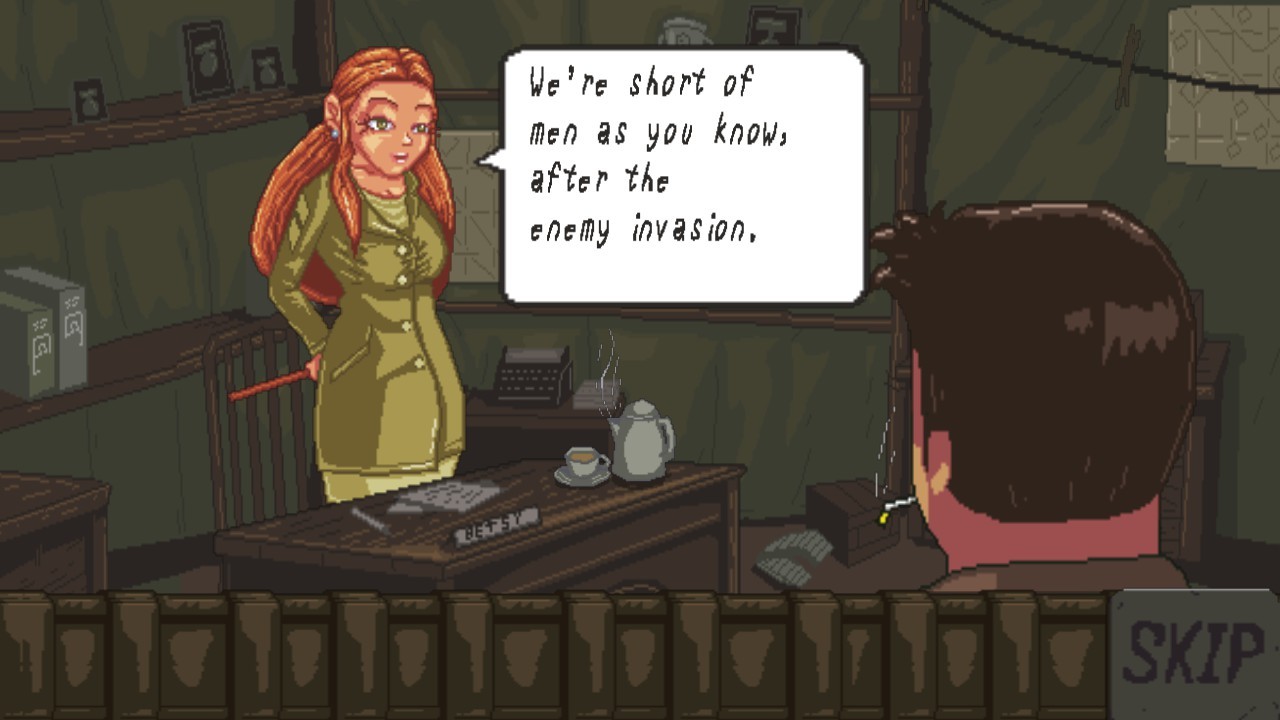 Super Trench Attack was originally designed for PC gaming and in some aspects within its elements, it shows. This is particularly noticeable when it comes to navigation, both within the menus and control of your character. It’s never game-breaking or unplayable, but more cumbersome than anything. Menu selection require you to move your cursor through all of the options to reach your desired choice and aiming your reticule can be fiddly at best, or in a way I can best describe, never feels really natural with controller inputs. Thankfully, a generous targeting system can alleviate some of its frustrations. Despite this minor annoyance, the rest of game plays beautifully throughout its six hour, or so, campaign.

In terms of its story and adventure, there’s nothing here that is too demanding or exciting even. It’s within its light overtones of comedy that make it come to the fore here, although its levels of combat are great fun to partake in; despite a lack of refinement in control and aiming. Should you die in-game, then you never lose any progress. In fact, in some instances, you can simply carry on from you left off. It takes some of the challenge away, but in the overall context of things, the whole journey itself is an enjoyable one to work through. Each of the levels hold a number of secrets and collectables too, all of which can provide new skills for you to learn and a series of tunnels can also be found that serve as a quick-travel system to help alleviate constantly tracking back and forth.

Overall, Super Trench Attack is a fun little game that shouldn’t be taken too seriously. In fact, it begs you not to, with its hilarious depictions of war. Some of its mechanics may be a little iffy, but in general, the overall level of gameplay shines through here and the game constantly adds new things and mixes things up to keep you fully engaged. However, saying that, I did find this a game better suited to casual play in short bursts, otherwise it can be over all too quick; although a ‘hard mode’ can be unlocked to provide a more sterner challenge. If you enjoy British, or toilet, humour, then you’ll probably find a lot to laugh at here and in all honesty, it’s the comedic values of this game that drive it forward. If you’re looking for a more hardcore and gritty experience, then you may well find yourself with trench-foot. Don’t take it seriously though, and you’ll be laughing all the way to Tipperary; even if it isn’t that long away.

Super Trench Attack will have you laughing all the way to Tipperary.