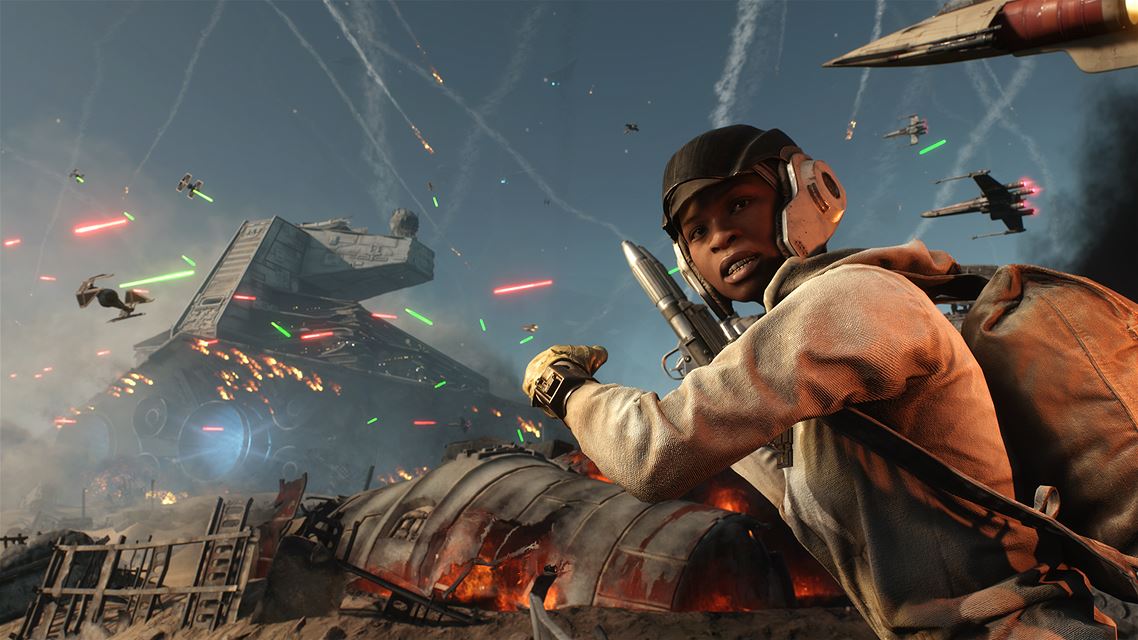 Straying from prior titles in the acclaimed Star Wars Battlefront saga, this latest iteration in the series sees the debut of several new and revolutionary weapons and vehicles ranging from the imposing ATAT in walker assault mode to the air speeders in supremacy, making for several nostalgic and exhilarating moments.

Taking place in the Rebellion against the dominative Empire, post Clone Wars, the game sees players take to several maps of extracted from the series expanded universe, from the fiery pits of Sullust to the icy tundras of Hoth. The game takes several ques from both prior battlefront titles, and the less prominent expanded Star Wars universe.

However, what truly encapsulates Star Wars Battlefront is as players traverse the maps large range of terrains whilst utilizing the title’s several new vehicles. Not only do these vehicles allow players to seamlessly traverse the game’s maps but also permit them to partake in both land and aerial battles with their foes.

In addition to this, due to its current generation only status, Star Wars Battlefront boasts a range of enticing new graphical effects, allowing players to seamlessly determine their enemy’s weapon type, or locate a concealed foe. Not only does this graphical upgrade permit players to locate and assess enemies, but also allows the game to harbour drastically larger maps, ranging from the ash clouded base of Sullust, to the lushist forests of Endor. As well as this, the game once again utilizes a range of original audio effects, from the firing of a panicked rebellion blaster to the foot steps of an imposing ATAT. 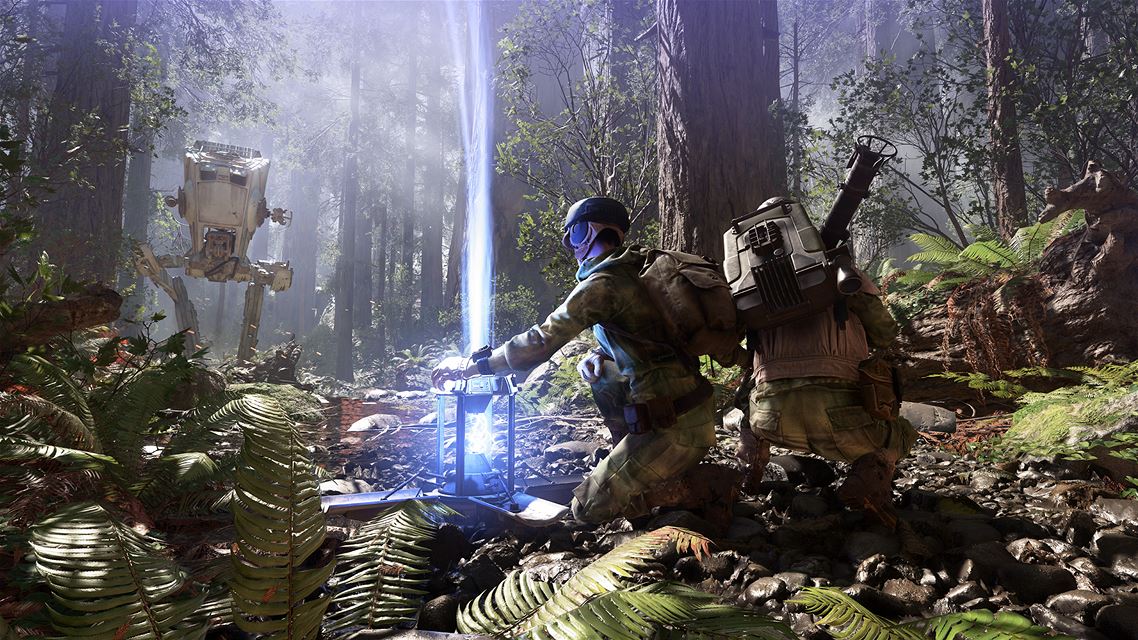 Unfortunately the game boasts little map variety as players are constantly obligated to partake in the same map selection throughout their multiplayer experience. This lack of diversity both easily allows the game to become a tedious experience, as well as permitting players to reaching camping spots, and several other unfair advantages. However, due to the titles large range of upcoming DLC this problem will likely obtain a solution in the near future, permitting a more exciting map roster.

Furthermore the game also sees the debut of little weapon diversity as players are once again confronted by a mere roster of blasters allowing players to quickly master its skills paving the way from an un-thrilling and exasperating experience. This issue is also accompanied by a lack of character creations as players are introduced to a roster of uninspired pre-made avatars, stripping them of the ability to compile their own character.

Thankfully the title quickly redeems itself with its extensive roster of modes ranging from the generic Supremacy, to the unique Hero battle. This range of new modes allows players to experience several new elements such as the titles newly introduced heroes, or its often exhilarating co-op missions and survival. 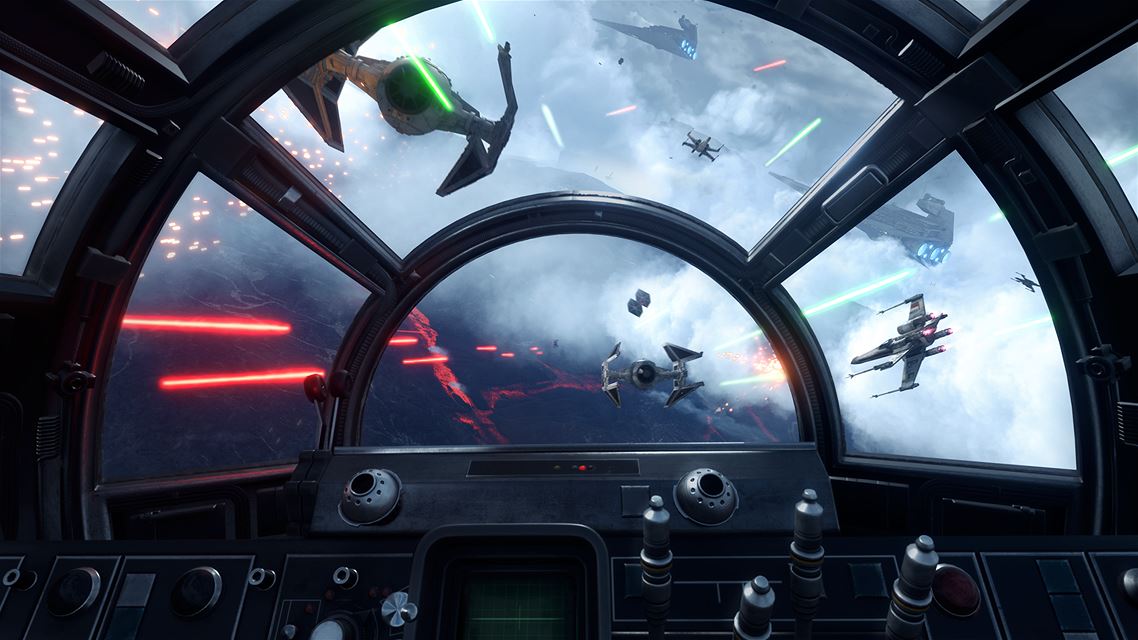 Alongside this throughout its maps and modes the game eventually picks itself up , with the debut of new avatar options regarding a unique range of alien races for the rebels, and a number of elite stormtroopers for the Empire. Alongside this players are now permitted to drastically alter their card hand and its options with a varied array of weapons and damage boosters. This not only allows players to utilize their own personal play style, but also allows each match to differ from one and other.

Also making a triumphant return from prior titles in the series are Hero drops, allowing players to take the reigns of several new and returning heroes and villains from both the Dark Side, and the Light. This once again drastically alters how many of the game’s maps play as players commonly converge on the Hero’s current location in order to eliminate them. This paves the way for several exhilarating battles between both opposing heroes and their allies.

Due to its current status the title also sees the debut of several nostalgic audio effects, ranging from the firing of an ATAT’s cannons, to the engine of a speeder bike as it skims the forests of Endor. Although, these audio effects not only allow players to experience the Star Wars universe first hand, but also allow them to seamlessly locate enemy vehicles depending on the prominence of their engines making for an intense experience.

Star Wars Battlefront sees the debut of a unique array of new weapons, upgrades, and vehicles returning from prior titles as well as making their gameplay premier. Although the title is not without its bugs, as players currently encounter several throughout matches, the game makes up for this with intense sound effects, beautiful visuals, and enticing and classic sounds.