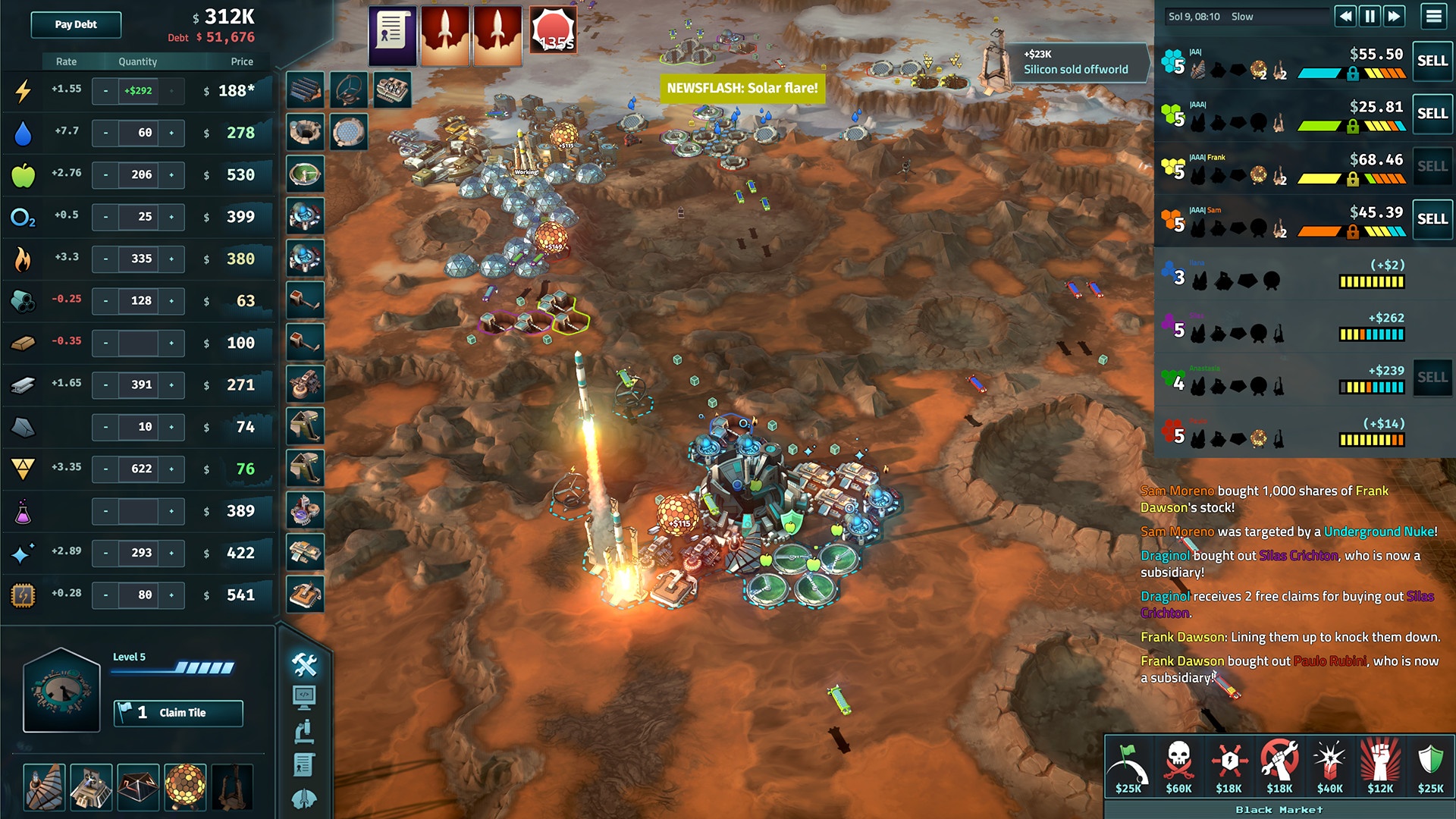 In the unlikely event that mankind lands boots first onto the surface of Mars within our lifetime, then you can bet your bottom dollar that it won’t be long before corporations follow suit, extrapolating whatever resources the red planet has to offer and making a few quid in the process. This is the premise behind Mohawk’s Offworld Trading Company, a unique real-time strategy game that asks that only the most cut-throat armchair capitalists apply within.

Part strategy, part management sim, Offworld Trading Company’s vision of future warfare is an economic one. You’ll find no bullets, bombs or borders here, but instead an open market ready for exploitation as you supply and demand the colonies of Mars with resources and materials that they didn’t even know they needed. But it’d be naive to think that you’re the only one cashing in on this golden opportunity so a combination of business acumen and down right dirty tactics are required if you’re to wipe out the competition and emerge as the most profitable business on the planet.

After selecting one of four corporations to play as, you’ll be whisked away to an area of Mars where settlers now call home and tasked with making use of the various resources on offer to profit from the colony. You begin the game by scanning the map for water, metals and energy and then building your base in a location that will naturally give you the most strategic advantage. You can gather resources from anywhere on the map, provided that other players haven’t already claimed them and you understand the further away they are, the more time it will take to stockpile them. The only restriction is that you can only claim a certain number of resource tiles before your base demands an upgrade.

Once you’ve carved out your own little piece of Mars, you can then begin to build factories and mills that will generate resources that can then be sold on to the colony. From there you can expand your business portfolio and craft valuable commodities such as glass, chemicals and electronics. In fact, just about every resources in the game relies on another. Food can be produced provided you have  a steady flow of water. Iron and aluminium can be combined to create steel. And pretty much every building within your purview requires a source of power, whether that comes from wind turbines, solar panels or geothermal reactors. It’s a skill in of itself managing these resources accordingly and making sure you don’t wind up in debt. 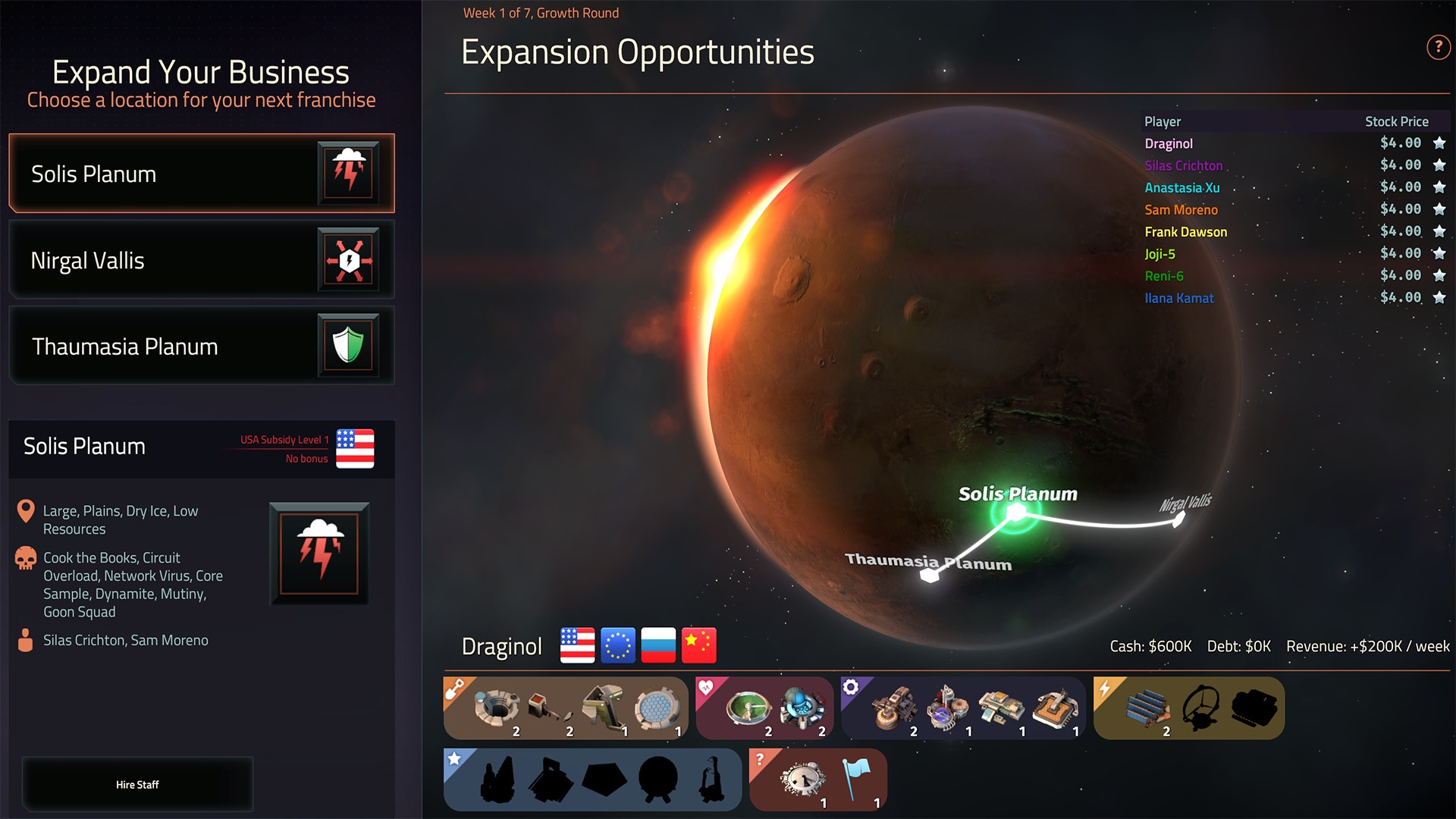 While you can watch as your company works hard to achieve financial stability in real-time, most of the action in fact takes place on the left hand side of the screen. This panel shows you the state of the market, with prices in a constant state of flux. Selling high and buying low is the easy part but an over abundance of resources can see prices drop rapidly, particularly if all players have access to them. Your job as CEO is to be one step ahead of the game, and invest in technology and resources that will allow you to get these items to your customers faster, in order to put your opponents out of business.

Similarly, things become tricky if and when one player has a stranglehold on a limited resource and won’t sell it off cheap. Market manipulation will only get you so far, so turning towards the Black Market becomes a necessity rather than a choice. Here you’ll find a series of underhanded assets than can have drastic effects on your opponent’s production rate, allowing you to profit off their “misfortune”. EMP bombs will take their facilities offline while underground nukes will destroy their resource supply altogether. You can even unleash a deadly computer virus that will lower their stock prices or hire space pirates to steal their resources altogether. For a game that does not include any sort of military warfare, proceedings can get rather vicious rather quickly and with your enemies having access to the same backdoor tactics, you’ll have to research fail safe technologies and more importantly, win over public opinion by building unique structures if you’re to outsmart them in the long run.

Surprisingly, all of this unfolds in a rather short window of gameplay. You’ll have just seven earth days to set up a business and become the richest company in order to win the match. Lasting around twenty-thirty minutes, it’s a feature that benefits the game, especially considering how some strategy sims prefer to play the long game. There’s only a limited amount of expansion and advancement you can make in any given match, so this short playing time turns a fast-paced experience into something that’s easier to digest and doesn’t wear thin.

With there being a lot to take in, the game’s engaging tutorial mode fast tracks you through business school in no time. From there you’ll be ready to take on the campaign mode and select which of the nine CEOs on offer you would like to represent your business. Each one comes with a number of perks, such as quicker production on certain resources or cheaper access to others so experimentation is a must as you begin to find your feet. Before each mission, you’ll also be able to purchase exclusive rights to certain technologies. For example, you can be the only one to harness the power of geothermal energy, while your opponents make do with solar power, limited by the amount of hours a day the sun will shine. It spices up gameplay in a way that keeps things ever-changing and constantly challenging. 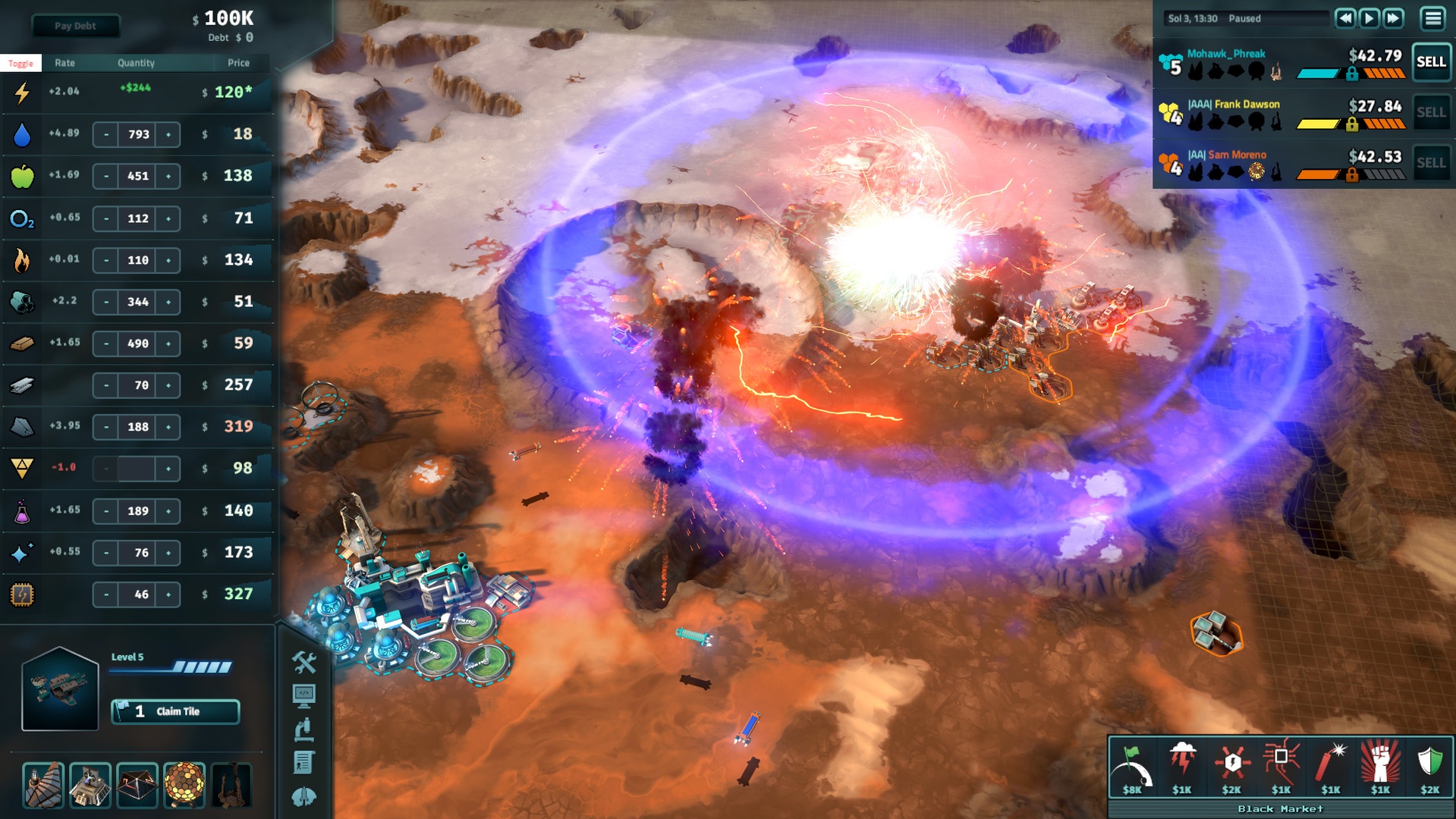 These variables also come into play whenever you achieve victory. Winning a mission does not necessarily mean you’ll walk through the rest of the game. Your opponents may not have has much cash as you but they have the ability to buy shares in your company, meaning that they too can profit off your victories. Of course you can do the same and the only way to get rid of them altogether is to buy them outright for a substantial fee. All in all it makes for a volatile campaign that keeps you on your toes at the start of every mission.

Beyond the campaign, there’s also skirmish and multiplayer modes, along with a daily challenge that will ask you to achieve certain criteria in order to win. While the intricacies will all develop differently, no matter what mode you play, the overall objectives and approaches are the same. You may even yearn for the glory days of the RTS by imagining a battalion of tanks or soldiers trampling all over enemies in one fell swoop. But there’s enough in the game to keep you coming back for more, creating an addictive experience that will never get old with age.

As a microcosm of capitalistic venture, you may even learn a thing or two about the mechanics of the stock market in a manner that’s engaging and simple enough to follow. The events may take place on Mars but watching profits being manufactured and manipulated is a concept that is anything but alien in this day and again. As a role-playing game, to say that it’s a hybrid of Command & Conquer and SimCity games wouldn’t be doing the game any sort of justice. Instead, Mohawk have gone off in their own direction to create an experience that’s addictive, unique, and totally out of this world.