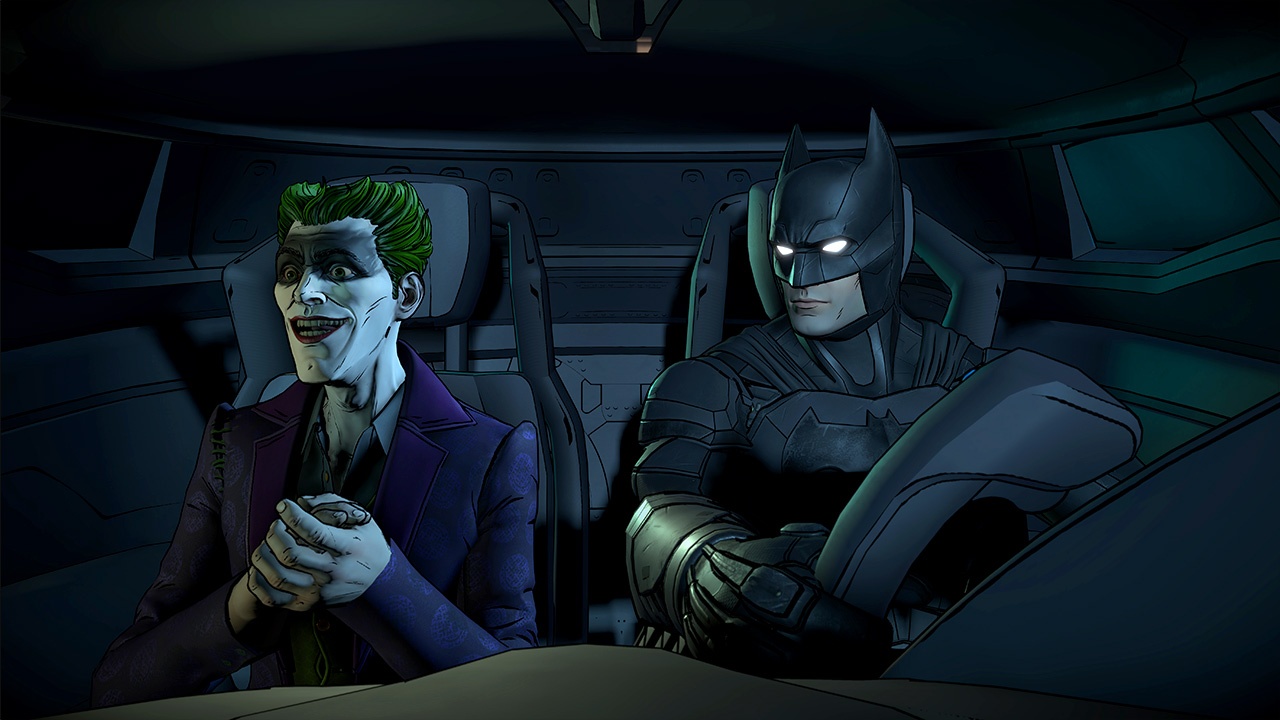 Telltale’s Batman, The Enemy Within, was a wild and turbulent ride of incredible highs, and traumatizingly depressing lows. And despite of the gradual improvement from the second episode onward, the series has failed to capture the magic behind the inaugural episode, The Enigma. And it is rather fitting that the fifth and final episode of The Enemy Within series, is an embodiment of the series as a whole. As it provides one with elating highs, and soul-destroying lows. And it does all that in ninety minutes or so.

The fifth and final episode of The Enemy Within bares the title Same Stitch, and on its digital cover, it is meant to be all about John Doe, and his transformation into the Joker. And Telltale, the publisher and the developer behind the title, has spent weeks hyping up Joker’s role in this series ending episode. In fact, Telltale has released two trailers showcasing Joker as a villain who is there to bring Gotham to its knees, or a vigilante who is set to work side-by-side with the titular hero of the story, Batman. However, despite of all the hype supported by trailers and press releases, Same Stitch, is far from what one would expect.

All who decide to purchase and play the Same Stitch episode of The Enemy Within, will be expecting a thrilling tale of Joker’s rise, and subsequent fall – stretched over all five chapters of the story. However, in reality the tale of Joker only covers the first three chapters, and is so incredibly rushed, that it is over before it even gets going. And it is a crying shame, as Joker is high point of not only this episode, but the series as a whole. 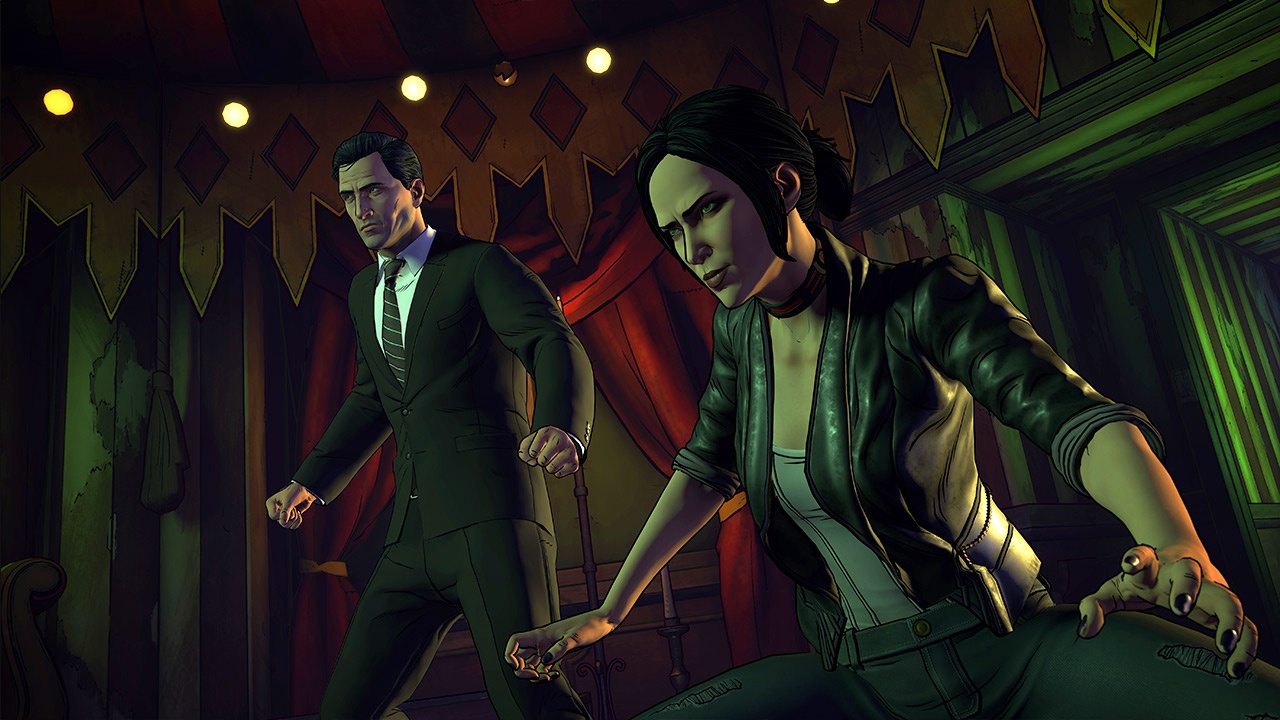 Joker is as impressive as a vigilante, as he is as a villain. He is as hilarious, as he is deranged, but the short running time of his story, ultimately stops him in his tracks, and side-lines him to the back-plan within a blink of an eye. And there are some great moments involving the Joker, where he has a conversation with Alfred about Bruce’s childhood, or where he attacks Bane in his comical manner, in order to save Batman, but those moment are few and far between. And it is immensely saddening, as he is seemingly the only positive of The Same Stitch.

Once chapter three comes to a close, and Joker is tucked away into side-lines, the story of The Stich goes downhill, and it goes there real fast. And not to spoil you the fun, or rather the lack of it, all I’ll say is that from chapter four onwards, the Same Stitch revolves around all the characters, which most don’t even care about. Yes, there is a consolation scene between Batman and Commissioner Gordon, and another one between Bruce and Alfred, which forces the player to make a Telltale TM choice, but those, are just droplets in a sea of boredom. And I myself have simply drifted off numerous times, while completing the final chapters of The Final Stitch, simply because the game did very little to make me care about the characters involved in those particular sections of the episode.

When all is said and done, the finale of The Final Stitch is basically only three chapters long, simply because what comes after them, is downright meaningless. But looking at the episode now, maybe it is for the better, as Final Stitch, just like all Telltale’s titles features no meaningful choices. And worst of all, it disallows you from playing your way. And it is incredibly infuriating, as no matter how hard you try, the ultimate episode of The Enemy Within sends you on a collision course, which forces you to fight Joker. And this goes not just against the supposed nature of Telltale’s titles, but also against the marketing campaign of the episode. As Joker, will always become the villain of the story, no matter what you do.

As you can see, the finale of The Enemy Within, is just like the series itself. It starts on an incredible, if limited high, as it presents you to story of the Joker, which despite of it’s all shortcomings, is rather impressive. But then, directs you onto a track of boredom and despair, alike to the one of the series’ second episode, as it forces you to sit through conversations, and interactions with characters which you care very little about. And while this exposes Batman: The Enemy Within as a rather turbulent, and incoherent series, it ultimately tells us more about Telltale as a whole, than the game itself.

Telltale has hit its high with the release of its very first The Walking Dead episodic series, and ever since, the developer and publisher in question, has been searching for this type of success. And while some titles such as the second series of The Walking Dead, and the Wolf Among Us have managed to satisfy many a player, world over – they ultimately failed to recreate the success of the original The Walking Dead. And that’s simply because the five to six-episode format, which all these games are based upon, no longer works. 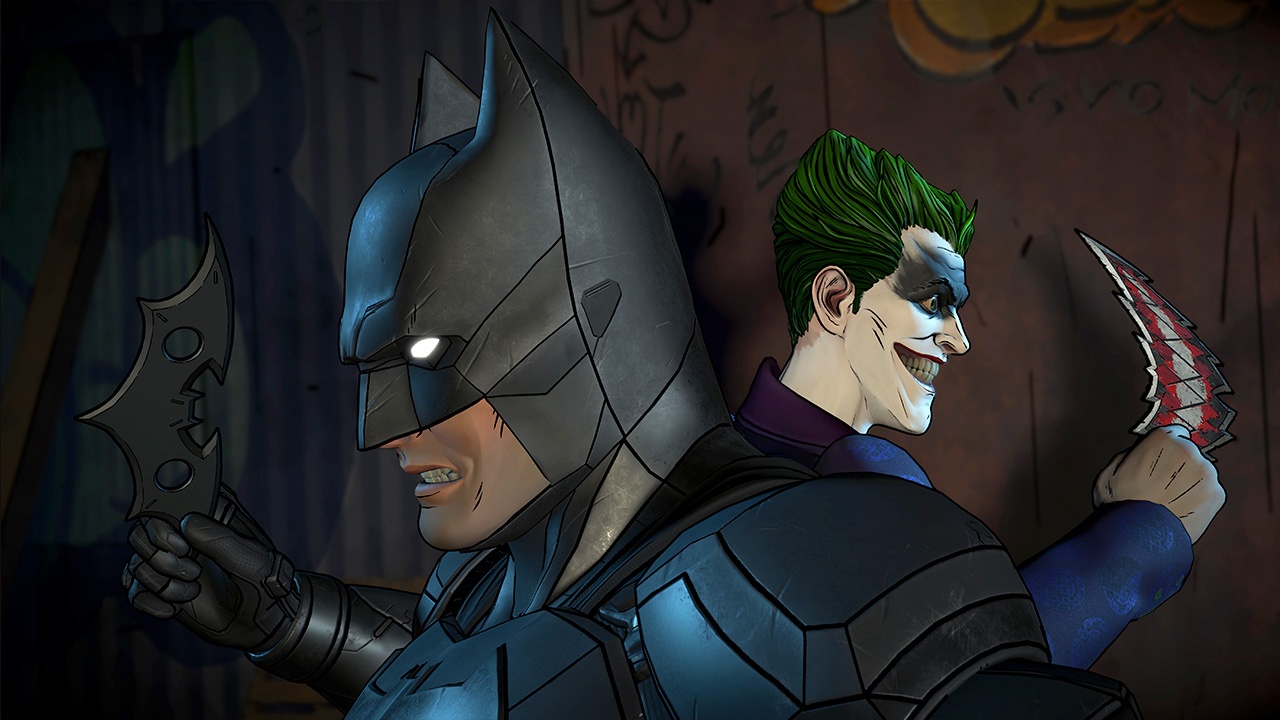 The biggest problem with Telltale’s games, and with The Enemy Within in particular, is that they try to feature too much content, within a very limited time frame. And The Enemy Within has completely exposed this flaw, as the vast majority of the main cast, simply had not enough time to capture player’s attention. And at times, the series in question has presented players with seemingly meaningful choices, but at the end of the day, those were based on a metaphorical coin flip, as nine out of ten times, they concerned characters the player have seen once, or twice.

Batman: The Enemy Within, as stated above, is a rather underwhelming series. And does very little to make one want another insight into the life of the caped crusader. And while it does end on a cliff hanger, which may incline some to see ‘‘what’s next’’, then it has to be said that we, as the consumer base we’ll be better off never getting another Telltale Batman title, if it is going to possess the same structure. The five to six episodic approach simply doesn’t work anymore, and titles such as The Pillars of The Earth, and The Raven, have proven so, as they both outperform and outclasses The Enemy Within by a mile. And unless Telltale changes its approach to the development, and game design, then it is very likely that the next part of Batman’s story will be just as inconsistent.

The score attached to this review may surprise many, as the text concerning the series, and the final episode, is rather negative. However, Batman: The Enemy Within as a complete package is not an absolute disappointment. Yes, the second episode is incredibly poor, and the series as a whole is a little inconsistent, but it does enough to win one over. And those who will have a chance to play it, without a notepad by their side, noting every positive and negative, will surely enjoy it. And Batman’s second outing in Telltalle’s form is worth getting simply to experience the best video game adaptation of the Joker to date.