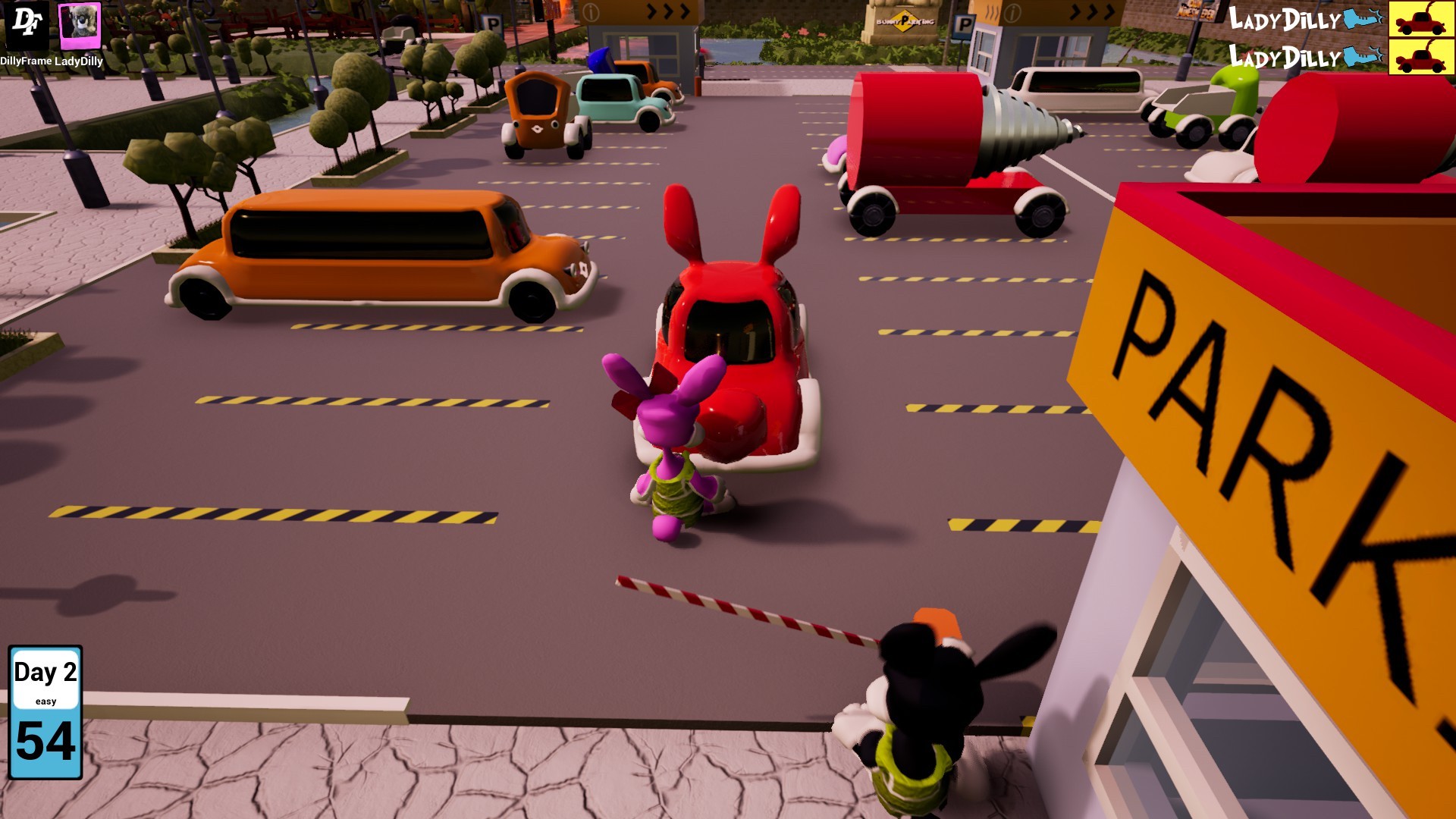 Not everyone knows that rabbit’s are the go to creature when you require your car to be moved through a congested car park. Their ability to move parked vehicles with the mere kick of one bunny leg is impressive, and more importantly, they are able to visualise solutions to problems in a 3D world. All I can say is thank goodness Indie developer’s DillyFrame had this insight, otherwise their latest endeavour Bunny Parking might be deemed absurd. This 3D puzzle game has you focusing on moving your red bunny eared car from the entrance to the exit in as quick a time as possible. Sounds easy I hear you scream, well chuck in a handful of badly parked vehicles, a wayward kicking method, lack of a tutorial and a gradually increasing difficulty. Completing everything that the game has to offer actually becomes quite the challenge.

You open your rabbit puzzle experience by being thrust into the action. A burst of colourful cartoon images depicts the world around you. You are standing by your bunny car and from here you must work out how to solve the problem. The first issue is there is absolutely no guidance, now the concept of the game is simple, but it’s all a little confusing to begin with. The developers really should have helped out by implementing a basic tutorial. Once you understand what it is that you have to do, you’ll find that the easy levels really are not that challenging. Each is broken down into days, and you are scored between 1 and 3 stars depending on how long it takes to solve each puzzle. With over 300 puzzles available across 3 different difficulties, there will be something for all levels of puzzling abilities. 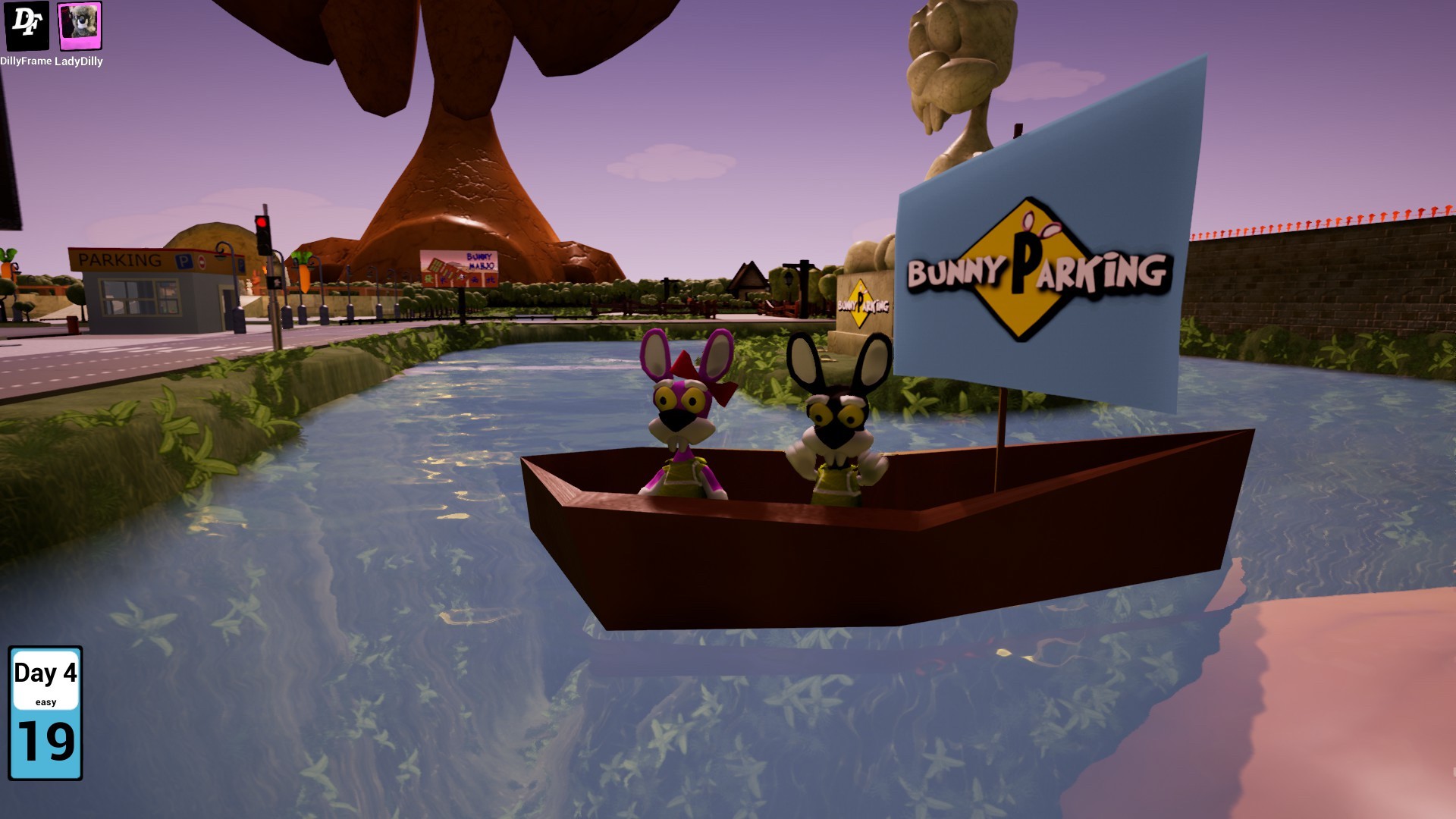 When the main game mechanic revolves around you booting cars from one space to the next, you would be justified in expecting the kicking action to be almost perfect, unfortunately for anyone playing this title you will note that DillyFrame didn’t read the script, and the single tool in your arsenal which allows you to achieve this goal is poorly executed. Frustratingly, I found that I would kick everything except the target vehicle. On the simplest of levels where you could plan the moves, you’d find that you would fail because so much time is wasted moving the wrong vehicles.

If you think that kicking cars would be the only fun you’d get out of playing Bunny Parking, then I’m sorry to say, you’d be sadly wrong. The developers allowed their creative juices to flow, and decided to implement some truly random ideas that are very loosely linked to the game’s theme. Ride around on car roofs, row a boat, or annoy the local carrot farmers to steal their golden carrots to gain a 30 second power up, the choices are endless. Well, they’re not actually endless as that’s pretty much all the additional fun available to you. With all the action centrally focused on the car park, the development team really could have used several different stages and locations to implement their ideas. This would have kept things fresh and made exploring the map more rewarding. 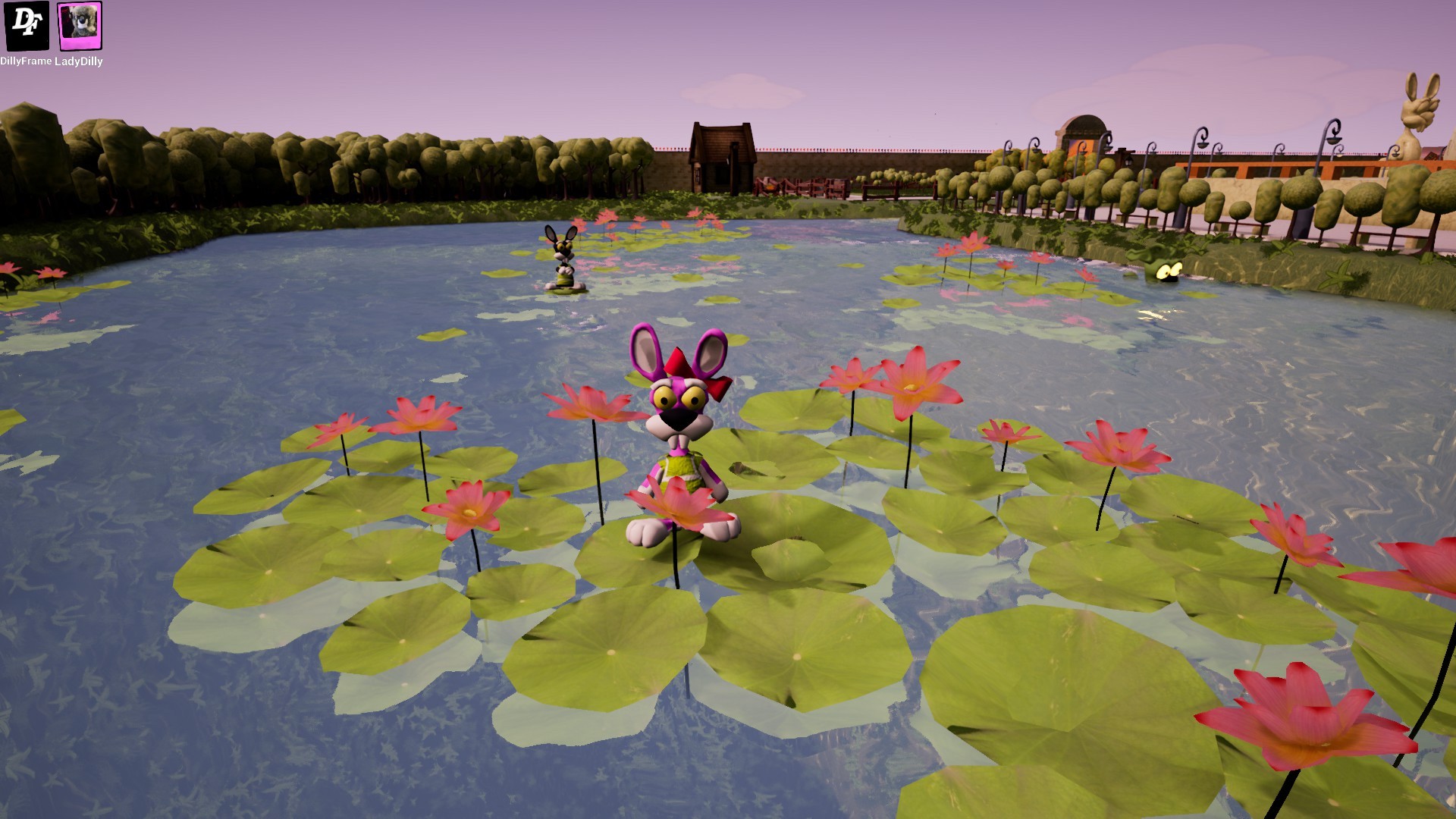 The fuzzy and outdated graphics really does let it down. For a 2020 Indie title I’d expect much better, with numerous glitches involving crashed cars, it would be terrible if it wasn’t so funny. The style has clearly been aimed at a younger audience, yet I doubt that they would either have the desire to play this, nor the patience to work past the woeful controls to solve the increasingly difficult puzzles. The only thing that prevented the graphics from standing out as the worst part of the game, was the awful choice in audio. When you decide to tackle a puzzle you are welcomed with the same high tempo song. If you can imagine being forced to listen to 100 school children playing their recorders on repeat, then you are somewhere close to how bad the audio experience is.

With so many bad points, you must be thinking surely there is something good about Bunny Parking? You’d be right, there really is a ray of light through this cloud of despair. The multiplayer adds an extremely silly and fun angle, team up with like minded rabbits, and try and solve those problems. If you happen to be anything like my friends and I, you’ll spend most of the time attacking one another. The puzzles are much easier to complete in teams, though you normally end up hitting one another thanks to the already mentioned appalling control system.

When I start a puzzle game I’m already prepared that I’m going to have to put the hours in to achieve that completed status. I also hope that there will be a lot to make me return for more. The variety of challenges within each stage is so minimal, that it always feels a bit groundhog day, the idea of facing 300 plus nearly identical problems really doesn’t inspire me. However, most of the achievements are focused outside of the car park area, this helps give you a break from the puzzles and it gives you the opportunity to explore all that the map has to offer.

The basic concept that DillyFrame explored was sound, unfortunately their execution of it was not. With dated graphics, poor audio, almost unusable controls and a really odd use of the world map, I believe they missed the chance to create a puzzler that had some depth, replay factor and themed stages that would have allowed the developers artistic licence to create what they wanted. If you are a hardcore puzzle fan, you may be able to look past the obvious shortcomings, and the clunky controls, though I feel that there are too many issues in its current state. The game is far too repetitive in nature, and this sucks out any potential enjoyment that can be found. It’s a shame as I’m sure this wouldn’t have been to everyone’s liking, but I was hopeful that it would be a hidden gem of an indie title, sadly it’s not.

Rabbits and parking cars is not usually thought of as a match made in heaven. DillyFrame unfortunately proved that right in this more miss than hit puzzle game.