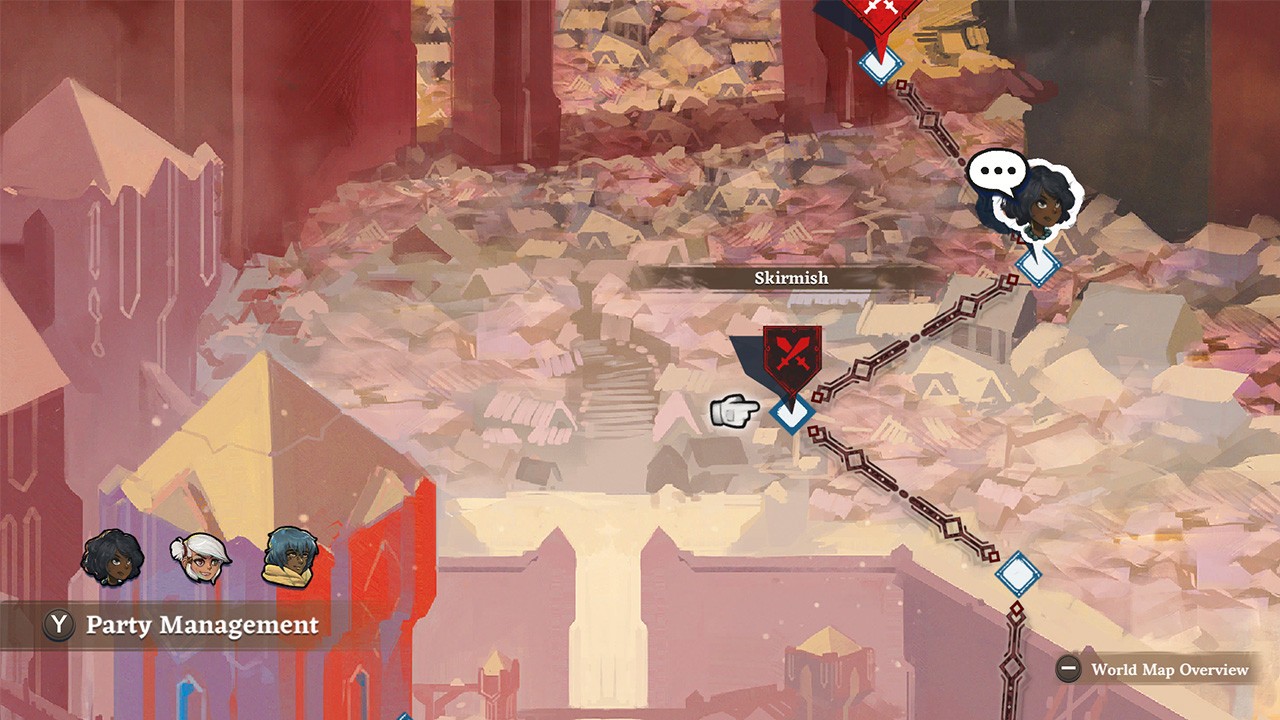 Indie gaming has come a come a long way over recent years. With successful funding campaigns and teams of talented coders, many of today’s offerings hold a level of presentation that can simply propel them higher than many triple A titles; at least in terms of pure gameplay styles. However, others have been polished with such refinement, that they simply shine brightly, even if they can’t be seen at the time within the myriad of releases that currently emerge every week. One such star shines very brightly indeed, but it’s also one that could easily be missed and that stellar title comes in the form of Children of Zodiarc as it plays a release onto the Nintendo Switch.

Developed by Cardboard Utopia and published through Square Enix and Plug In Digital, this role-playing game holds many similarities to other games within its genre, but dig deep, and you’ll unearth a truly unique game with an astounding style of presentation, clever mechanics and a story that pulls you in by the scruff of your neck. The game takes place within a dystopian setting, where the kings of hierarchy live lavishly, whilst the remaining populace reside in squalor, where food is in such short supply, that cannibalism is a part of everyday life. You play as Nahmi, a young girl who allies with the other children of her neighbourhood, where they embark on a quest to reveal the secrets of the Zodiarcs, a long-forgotten remnant of the past, yet are actually powerful relics that hold the power to change the values of society.

The game plays primarily as a tactical, turn-based RPG, with movement along a grid within isometric environments that hold a distinctly retro feel about them. However, its detailed and bright environments, impressive animations and general presentations holds a more modern value, bringing its vivid world to life in a spectacular fashion. There are a couple of options available to you with how you would like to play, but in all honesty, the only one you really need is the story mode. Told between events and bouts of combat, the narrative is superbly written, bringing a vivacity to the theme and settings of the game, but also a level of characterisation through banter that really brings the protagonist, her friends and foes to life. Branching story lines also add extra content to the gameplay, as well as fill in the backgrounds of certain stories and events, investing you deeper into its overall arc. 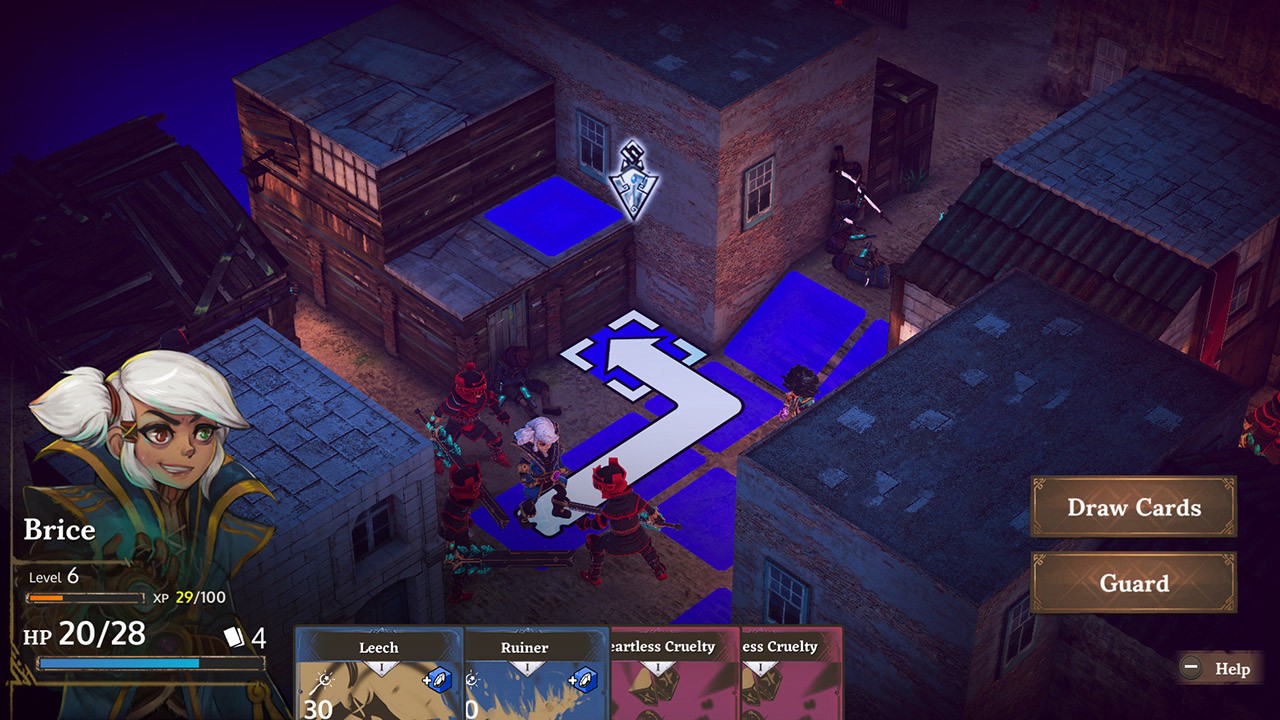 In terms of general gameplay, there’s nothing inherently different or new when it comes to movement or exploration. You pick an area movement along an axis of grids and rotate the camera to view different perspectives. Even encounters offer the usual mechanics of pre-emptive strikes through sneaking up behind unaware enemies, or counter-attacks from head on collisions. However, when it comes to the actual combat mechanics of the game, it brings a whole new level of gameplay to the table, and by that I mean that it plays just like a table-top adventure with dice rolls and decks of cards to add a strategic layer to the gameplay and the ultimate outcome of each encounter.

Levelling up your characters doesn’t award weapons or armour. But instead issues new cards and dice that can be used in the combat scenarios. Each card or dice hold different values that deal with attacks, defensive measures and spells, whilst others can hold curses, adding effects that may hinder your characters. From your selection of cards, you need to build a balanced deck that will deal with whatever gets thrown at you; especially with the limits of only taking seven cards with you into battle. Once you play a card, the dice come into action to provide a means of how effective your play is. Each face of the dice holds values that attack, defend, draw cards, heal or a special star token that activates special abilities. Find the right combination, and you can produce some effective moves, whilst other combos can severely weaken your chosen stance. 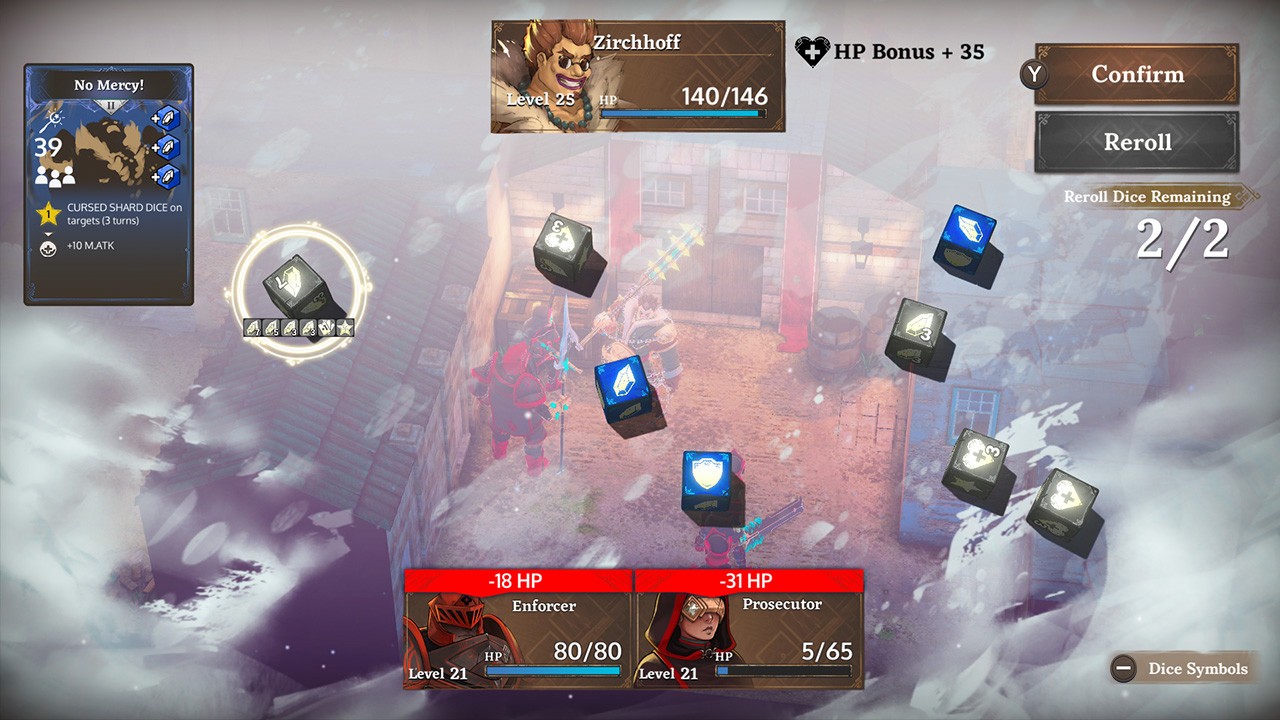 It does bring a strong element of luck to the gameplay, but with well crafted cards and dice, you can produce an effective means of calling upon a variety of moves. This can also be further alleviated with the game’s ability to hold certain rolls and re-roll other, remaining dice to try and increase your chances of a more, powerful move. The whole mechanic can take a while to get used to, but the game provides plenty of opportunity to get to grips with its mechanic, long before you reach the spike in difficulty towards the game’s conclusion. It feels fresh and unique in its implementation and the combat is actually really good fun.

In fact, everything that the game does is very well presented, from its gameplay and mechanics, to its stunning, hand-drawn environments and cut-scenes. The musical score too, is worthy of a mention with its rousing compositions and memorable playlists. If there is any downside to the game, then its overall length of twenty chapters doesn’t produce the longest game ever, but for its price point, is long enough to make it a worthy purchase. Some slight technical issues can also arise from time to time, but these are very few and far between and never really hamper the overall gameplay. These are largely the odd skipped animation or dice rolls that are hard to make out. As I said, very minor issues.

Overall, Children of Zodiarcs provides a refreshing take on role-playing and table-topped adventures combined. Its story and presentations are great and its general gameplay runs smoothly across a variety of nice-looking locales. In terms of its turn-based mechanics, there’s nothing inherently new here, but when it comes to combat, the game brings something new to the table with its card and dice rolling mechanics. The awards of levelling up with new card and dice to play, produces a rewarding experience that keeps you playing, as well as its rich storyline that is compelling to follow. It may be a short-lived experience, but its one that has been polished to such a level, that it simply shines in everything it tries to do and for that alone, makes it a game that comes highly recommended.

Children of Zodiarcs provides a refreshing take on role-playing and table-topped adventures combined.