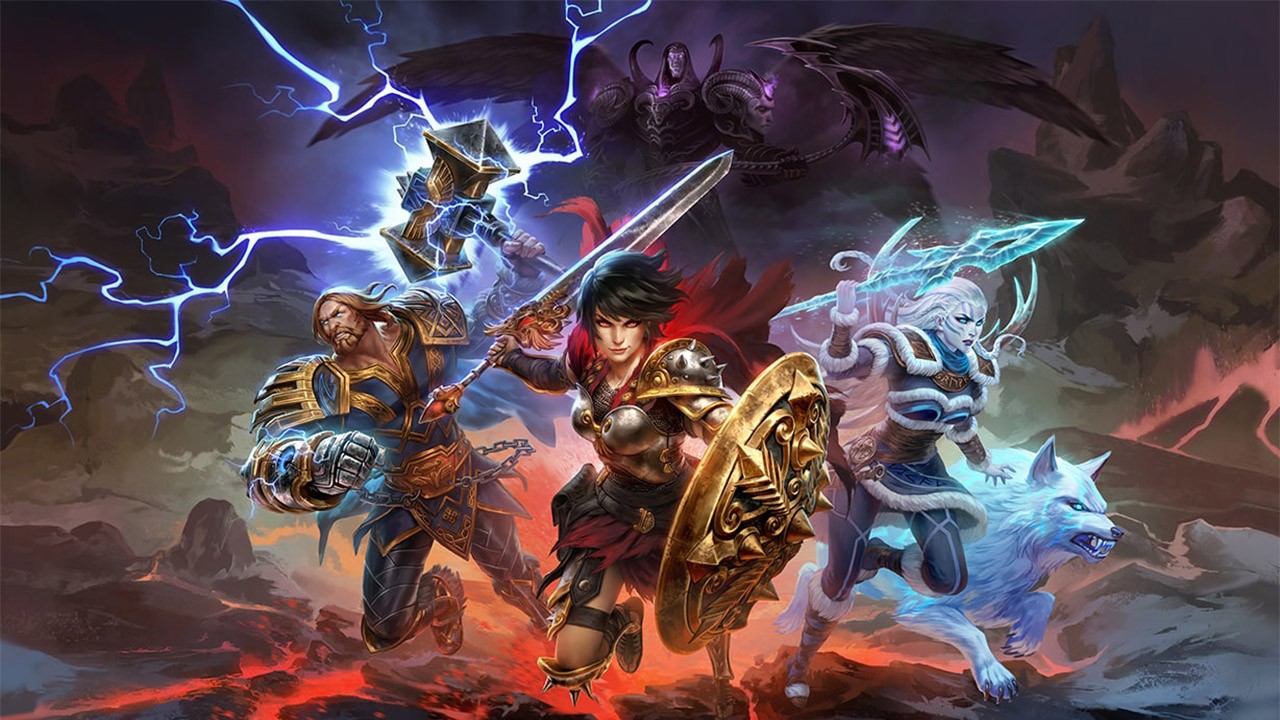 Since the release of Nintendo’s hybrid console, we have been seeing an evolution in the gaming landscape. In the past, if people wanted to play online together, they were stuck on their platform of choice and limited to the player pool of the same platform. With recent years, there has been a blending of the ecosystems. We have started to see companies allow players to play with anyone regardless of platform preference. Some are more willing to allow this than others, but there has been progress. Now enter Hi-Rez Studio’s SMITE; a 3rd person MOBA (Multiplayer Online Battle Arena) that allows a player to select from a wide range of Gods hailing from various amounts of Pantheons to battle it out PVP style in different game modes.

What sets SMITE apart from most other MOBAs, is the fact that it allows cross-platform play across PC, Xbox, PS4, and Switch. Also the unique 3rd person perspective creates a more intimate feel of the game that makes the player more involved as compared to the traditional top-down view of other MOBAs. With this specific review I was playing on the Nintendo Switch version of the game; due to it being the newest platform to support the game being released on February 19, 2019.  With that being said, the base game is the same across all platforms no matter what your preference is. The cross-play functionality can be filtered by input types. Players can decide whether they want to play with only Controller input, Keyboard and Mouse input, or both. With the game being a little over 6 years old at the time of this writing and with it running on the older Unreal Engine 3, it is easier for the game to be optimized and run efficiently on the Switch. Plus the studio’s experience with the Xbox One version of the game really helps with the process of porting it over due to the fact that the studio does not have to create entirely new inputs for controller use. It does not feature any Switch exclusive controls like the gyroscopic aiming seen on the Switch port of Overwatch. 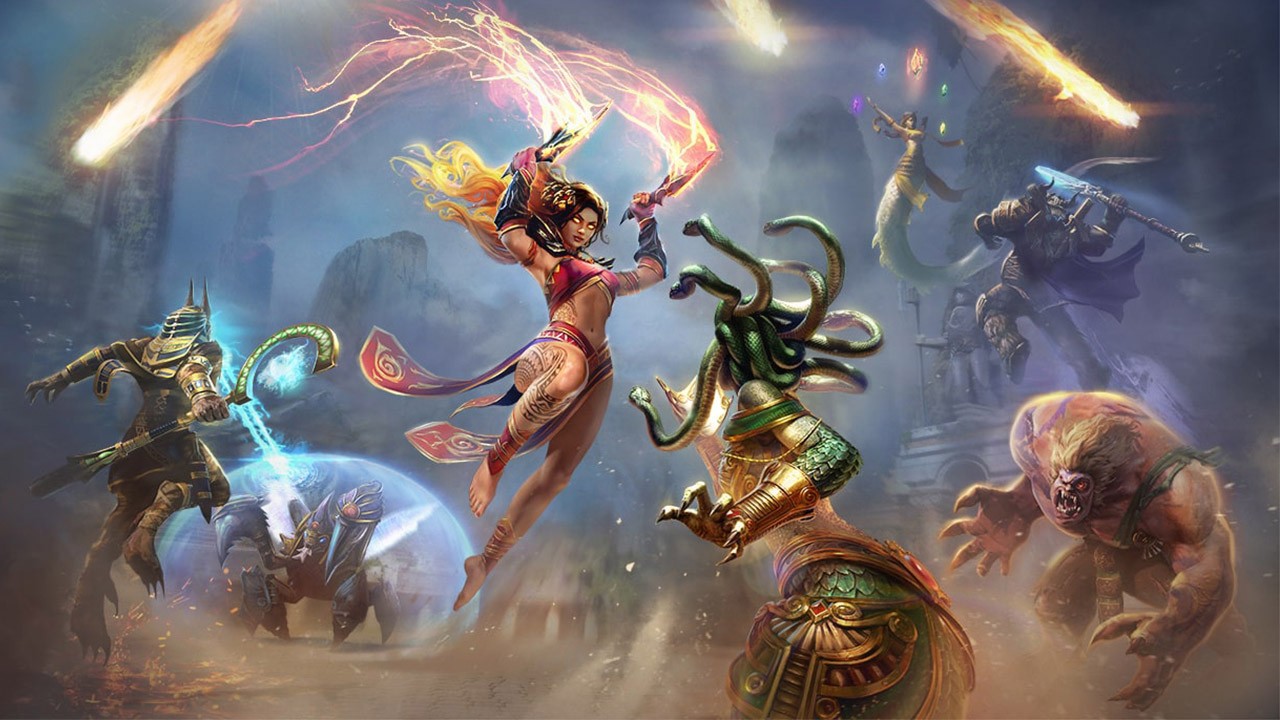 The game is a Free to Play model where you start off with a free rotation of 5 Gods that are swapped out every week. There are 5 classes the Gods are sorted into; that being of the Assassin, Mage, Hunter, Warrior, and Guardian. Players are encouraged to play through the tutorial once they have logged in for the first time to understand the basics of the game. Players can play through a variety of game modes to earn the in-game currency, Favor, which they can spend towards the purchase of a specific God. The plus side of this model is that it can be played entirely for free without the player having to spend any money on the game.

Of course, there is a premium currency called Gems which are purchased with real-world money. These Gems are used to exclusively purchase cosmetic-only items such as skins for the Gods, loading frames, etc. Players can play in the Jungle Training mode to test out any of the Gods and if players find one that they like, they can be purchased with favor. On the other hand, if the player would rather own every God in the game, they can make a one-time purchase of $29.99 for the Ultimate God Pack. With this purchase, a player will unlock every God released in the game and ALL future Gods released for the game. I went with the Ultimate God Pack to get a feel for all 109 Gods currently released in the game. My wife decided not to spend any money and opted to grind out her Favor to purchase the Gods she wanted to play. To grind out her current selection of 15 Gods took roughly about two weeks or so of casual play. The game is generous enough to offer Favor through completing matches, weekly quests, and just simply logging in daily in order to help obtain Gods. The game never felt like a constant grind where it tried to force players into purchasing the God Pack. Where the developers try to make money is off of the purchasing of Gems.

The developer has a regular cycle of premium skins release about every two weeks or so that are showcased right on the home menu screen which can only be purchased with Gems. Gems can be obtained for free but that happens very infrequently. Players can obtain 50 Gems for every 7 days of logging in. The premier casual game mode for Smite is called Arena. Here players can play in a 5 vs. 5 match where the objective is to deplete enemy tickets to 0. Each side starts with 500 tickets and for every minion that gets in the portal located on the enemy’s side of the map or is killed by you or your team, 1 ticket is deducted. For every enemy God kill, 5 tickets are deducted. Lastly, for every 10 God kills, you will spawn an ally Minotaur that will deduct 15 tickets if successfully walked into the enemy portal. The average time for an Arena is about 15 minutes. This is by far the most popular game mode Smite has to offer and the one I recommend most if you are just beginning or just want to relax and have some fun with friends. 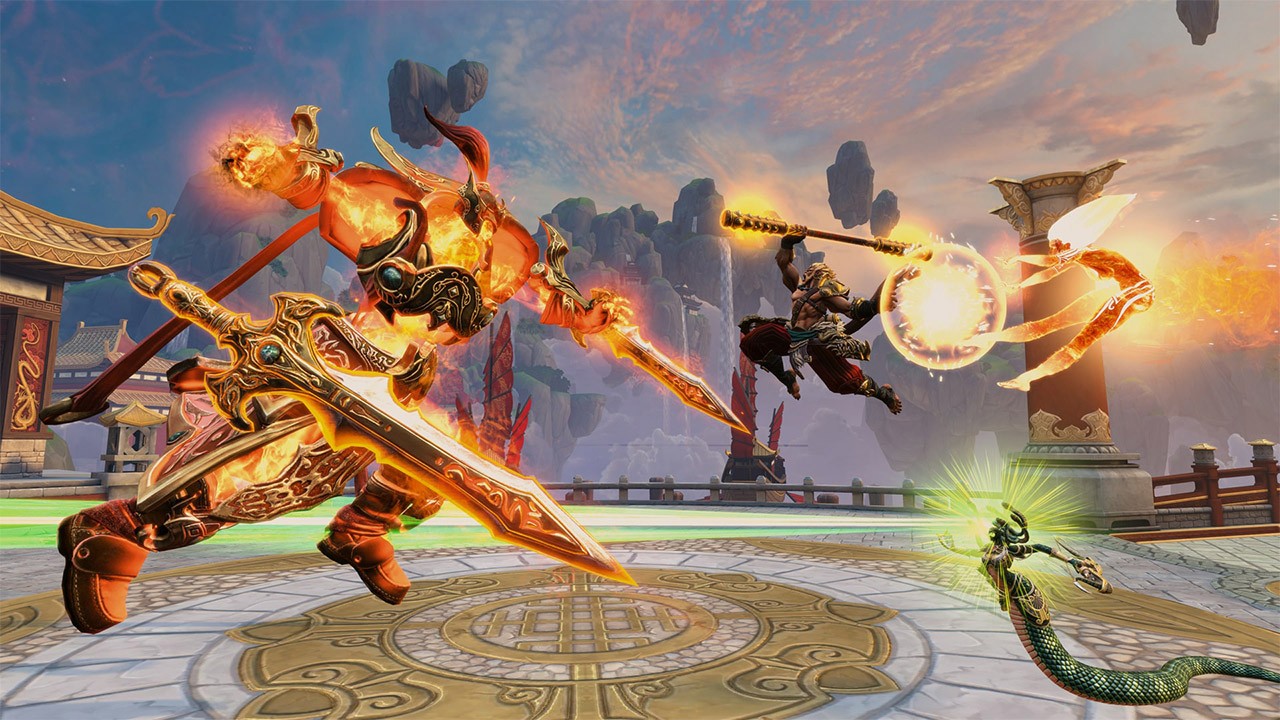 SMITE offers other games modes of varying complexity to help round out the game that would take too long to go over in this sample review. SMITE is not the newest game on the block, but I would give it credit for the persistence of adapting. With consistent updates, full cross-play support, and devoted developers and fan base, I would highly recommend this game to anyone looking for something that never feels stale and one that can be enjoyed with friends. Though, the game does try to push the sale of Gems constantly, they are never crippling to the experience of the game which can be enjoyed completely for free. Just like with any game there are bugs too. With the consistent updates, however, these are typically fixed within a patch or two.