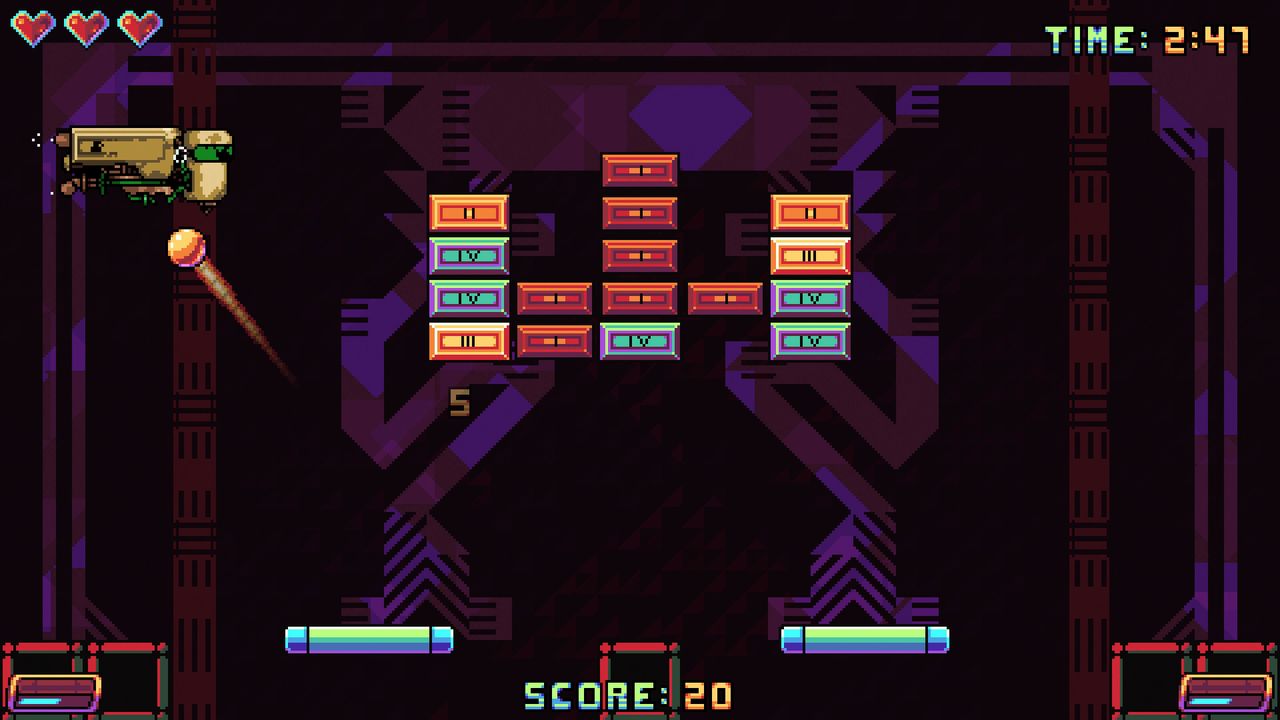 There is nothing in the world more utterly fascinating than a big swing by an indie developer. It takes a lot to go out of your way and create something utterly bananas and complex in a world where we’ve seen simplicity not only captivate people’s attention, but their wallets. Games exist to entertain, to educate, to evoke emotion and to do any number of things. But there are rules that I think we all understand. When it comes to simple arcade games, keeping things basic and surface level tend to be the best approach. For whatever reason, Lillymo Games (in cooperation with EastAsiaSoft) looked at Arkanoid, thought for a moment, and decided “let’s make this as complex as possible.” And, somehow, it worked.

Twin Breaker: A Sacred Symbols Adventure begins with a completely over-the-top backstory that gives lore and information not found in some Final Fantasy games. Humanity is taking to space to try to find new ideas and futures, and we’ve already committed to creating Generational Ships: spaceships where people will live their whole lives on board for the purpose of piloting it to some faraway land for their descendants. This is after we established a massive world war, where America abstained from choosing sides and became the central neutrality hub (I seriously can’t imagine that). Then, after things settle down, spaceships start disappearing, until one ship, nearly a hundred years later, suddenly blinks into existence and then vanishes, but not before sending out an encoded message that reveals a wormhole near Mercury. Having established in two minutes what would have been 45 minutes in a Stephen Speilberg movie, we now meet our heroes: codenames Colin and Chris, piloting the twin ships Greetings and Salutations, armed with an experimental weapon called the Bouncer. These two ships will enter the wormhole and venture forth, looking for what became of the other ships, and also to see if humanity has just stumbled upon the next great secret of space and the universe (spoiler: they have).

If you are here for just the story, then you’re in good company. Twin Breaker comes with an astonishing seven different game modes, but the primary mode (innocuously labelled as “level select”) is what propels you forward. You’ll get exposition between several stages (not every single one), which is good because there’s already a ton of chatter and exposition for what is seriously a twin paddle brick breaker. For that alone, I’m sort of awed by what Lillymo Games decided to set out and do. They didn’t have to incorporate anything, but they justify not only how the game works, but why it’s important that the levels progress the way they do and what we’re hoping to accomplish across the forty levels that also happen to have both collectibles (for the achievement room) and a new game plus mode, because why the hell not. The collectibles (which are earned from high score markers) include an ever expanding codex to help add even more story to the game, so that you’re really in the minds and hearts of Colin and Chris. Seriously, I’ve barely scratched the surface: this game is DEEP. 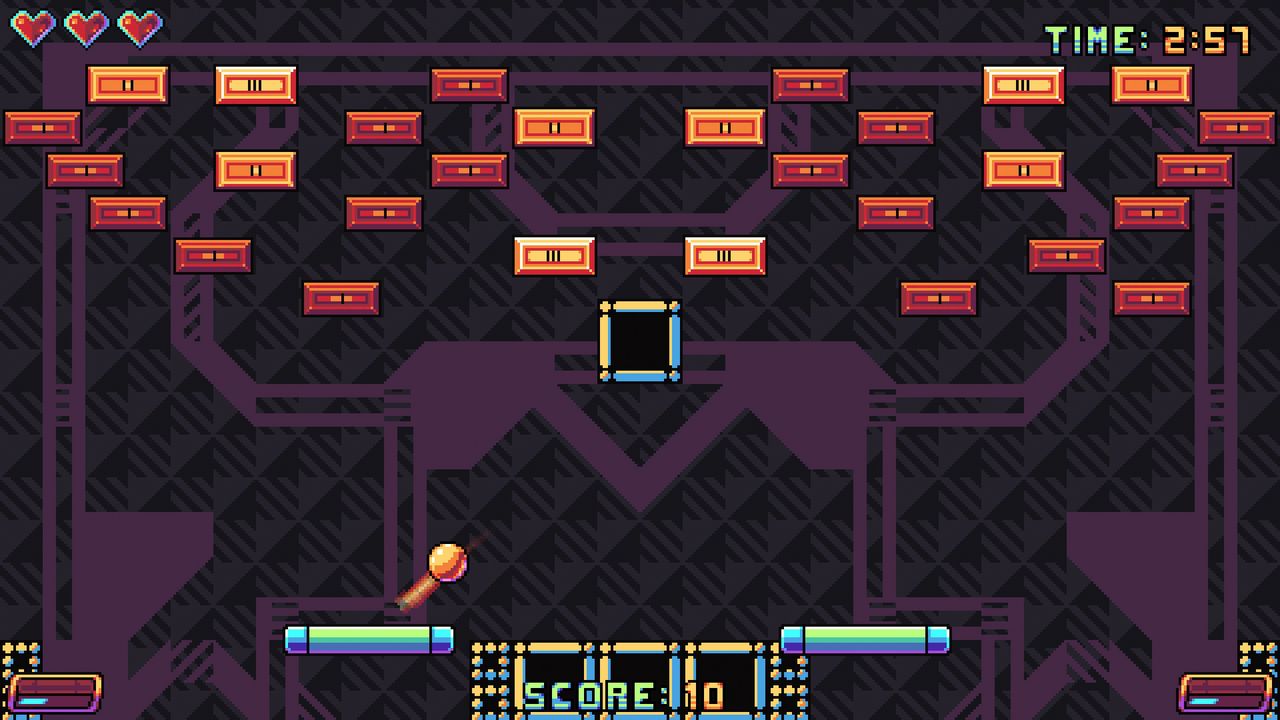 Now, into the main gameplay. Twin Breaker can be played alone or with someone else, but you ultimately need to control two different paddles to bounce the ball back and forth with the bricks you need to break. Control pad for the left, buttons for the right, you get the idea. As you break the bricks, things will be released, and you need to make some decisions. Some are helpful powerups, like the fireball (which can do extra damage to strong bricks), the heavy ball (which allows you to pass right through multiple bricks without bouncing back) and the speed ball (go fast). There’s also the shrinker (makes your paddle smaller), so don’t think everything that comes out will be helpful. Additionally, some bricks will release enemies and traps, which can damage your paddle. A damaged paddle is smaller and moves slower for a period of time, so you can see how that might be a bit of a pain in the ass.

But it doesn’t stop there. Twin Breaker actually incorporates a rechargeable move for the double ships of Greetings and Salutations, and this feels like a huge game changer for the brick breaking genre. You can actually send up a vertical projection of your ship – not your physical ship, but like an energy phantom – that will only affect your ball. So if you think that your ball could get a better combo if it reflected a few feet up instead of back down at the base, you can shoot out this ethereal ship and bring about the ricochet earlier. And this blew my freaking mind. With the right parameters and setup, you can “juggle” your ball in the blast zone for quite a while, as long as you get the distance right and manage to reflect between the two paddles with enough time to recharge your projection ability. It was great because it wasn’t overpowered, but it was infinitely more helpful for boss battles if you figured out the right way to do it.

Boss battles are also handled pretty well in Twin Breaker, which is great because I couldn’t figure out how to incorporate a boss fight into a paddle game in the first place. By having Chris and Colin share a health set, instead of just an elimination method for gaming – dropping the ball means losing a conjoined heart and not individual life meters – it can then extend into other entities, who have life meters, attacks and are differently affected by the Bouncer. Bosses attempt to strike you down, shaving off the mobility and the works of the ships in order cause your ball to drop. Missiles, floating fists, various debris…it’s all there. There’s even a particularly memorable boss fight where the two ships need to move vertically instead of horizontally, allowing you to strike from the sides and also totally flipping your perspective on the gameplay (granted, you’ve been doing sideways for the last few stages, but that’s neither here nor there). 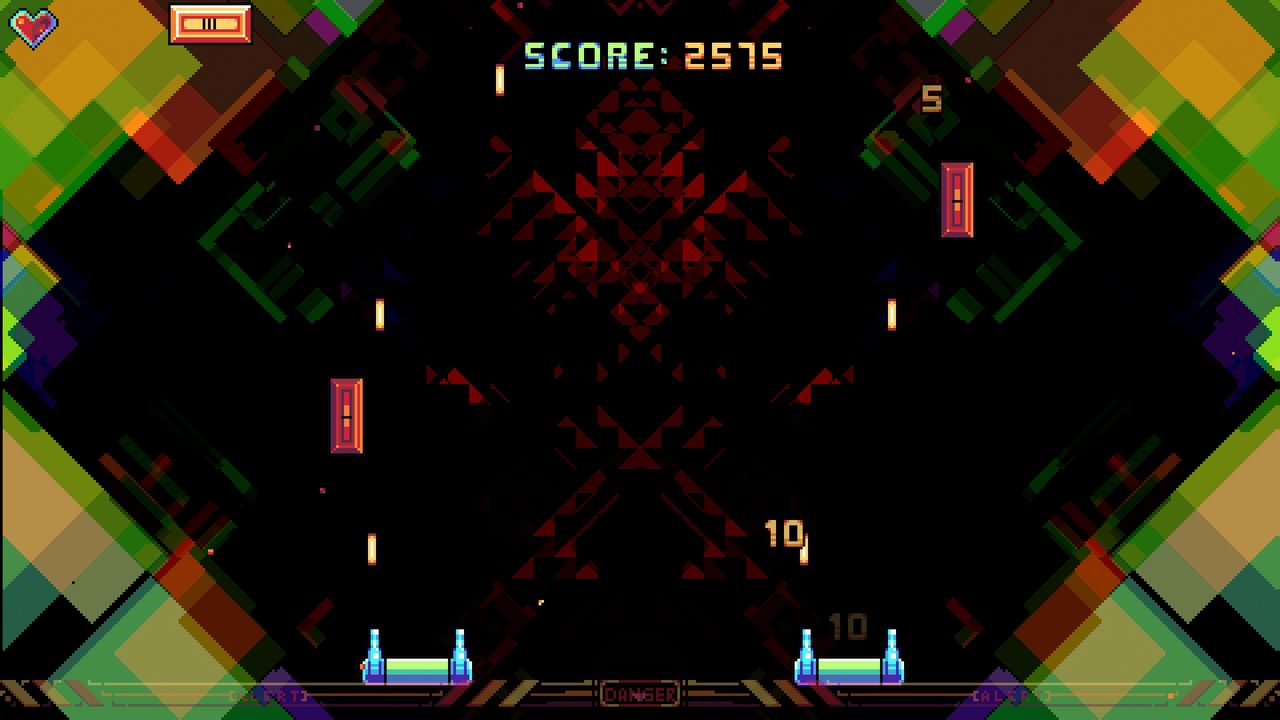 I will say, once the game twists about halfway through, it loses a bit of its enjoyment. You eventually activate a “duplication pack” that Colin and Chris were sitting on, which means you have to control four freaking paddles at once for several stages. This was straight up, not fun. It was very complex to try and keep everything in mind, and even though the paddle controls were well partitioned out, it created too much to focus on, even with a second person at the helm. This felt like a hat on a hat when we already had a fairly different and complicated (but not too much) game, and now we’re well beyond where we want to be. I was grateful to be done with those stages, because they were not enjoyable.

Having said all that, my time with Twin Breaker was pretty cool. It had plenty to come back to, including the boss mode, hockey mode (boss battles with air hockey conditions), shooter mode (which transforms your ships into autofiring turrets to shoot down bricks) and random mode (as it sounds). It had quite a bit of meat to ingest, with just a hilarious amount of story for something that could have been so simple, but was so very, very ambitious. It’s certainly worth a look, and I have to tip my hat again to Lillymo Games: just when you think you’ve seen everything, you find a brick breaker with a space-opera setting and massive amounts of textual lore.

Yea yea, we’re gonna break bricks, but before we do: do you think the universe beyond us is undiscovered, or hiding?