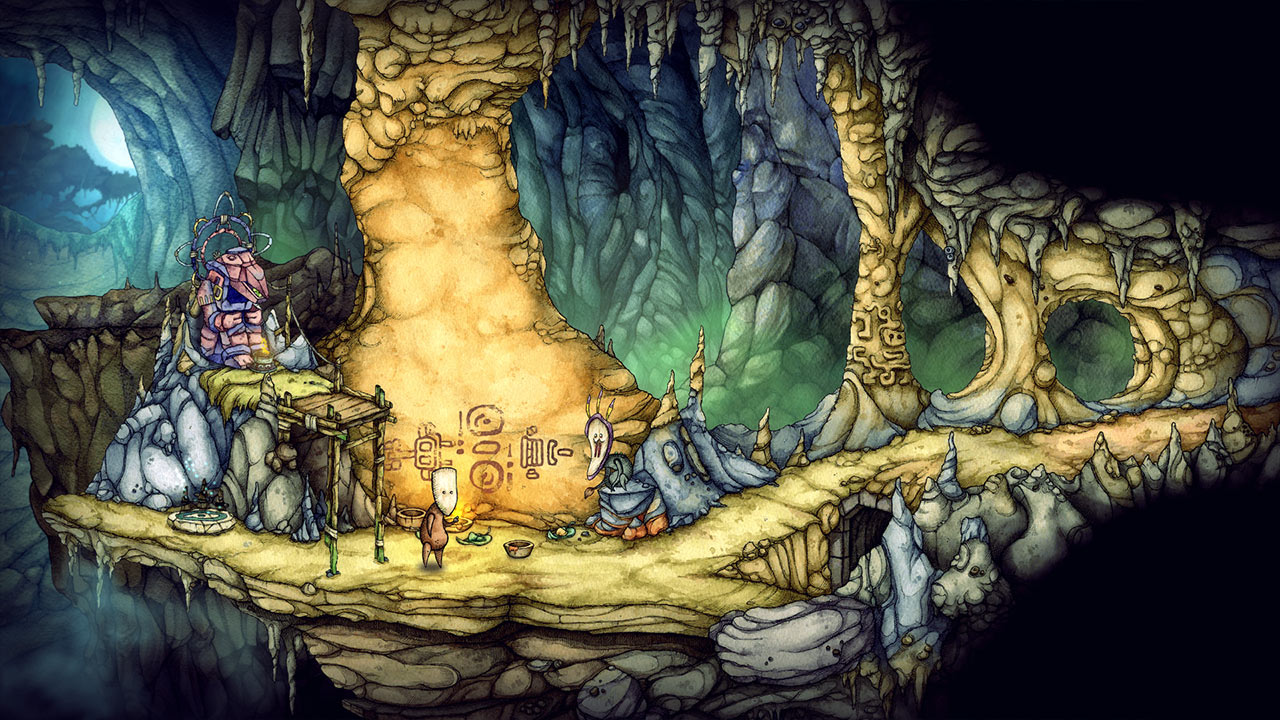 Puzzle adventures are a special breed of gaming. Far apart from their usually more comical and illogical Point and Click brethren, puzzle adventures usually involve a character moving forward in a world that’s mostly nonveral. Using cues from the environment, glyph-speaking NPCS and common sense, you have to piece together the way to get to your ultimate goal, whatever that may be. These types of games seemed to have been really popular right around the turn of the decade, but I haven’t seen any in quite some time, especially not of the “grand artistic order” measure. It seems like all that is about to change with the release of Candle: The Power of the Flame, which is looking to come out on every console shortly (but, naturally, is drawing more attention on the Switch). After sitting quietly on the Steam storefront for almost two years, is the flagship title from Teku Studios going to grab your attention, or will it simply snuff out?

Candle: the Power of the Flame is the story of Teku, who is the special servant of his village’s shaman. Teku has opted to literally give up his left hand in order to attain this position, instead replacing his limb with an eternal candle, capable of great magic and powers in the right circumstances. The evil Wakcha clan has decided that Teku’s people have been peaceful and “not on fire” for far too long, and burn down the village while also kidnapping the shaman. Teku decides that he’s gonna be out of a job if he can’t get the shaman back, so he embarks on a great quest to rescue the shaman and, in turn, his village. Teku also promptly falls into a small lake, extinguishing his hand flame, letting you know that, no, this is not going to be an easy journey.

Candle plays out in a fashion that longtime puzzlers will recognize, which is the artistically beautiful puzzle game. Set in gorgeous, hand drawn worlds and environments, Teku must use his wits and his inventory to figure out how to make it across perilous landscapes, murderous Wakcha patrols and oddly aggressive animals in order to reach the shaman. He will also use the titular candle with which he is permanently equipped, though not always in the fashion you may expect. For example, some enemies will be repelled by the light, and others drawn towards it. The aforementioned Wakcha know, for a fact, they are stronger than Teku, and the flame draws certain doom your way. Sometimes you need to light things on fire, and, occasionally, you have to tap into a special “spell” of sorts that comes from tapping the A button. The spell interacts with certain items and objects to create mystic effects, but they aren’t always what you think they are. Oh, and Teku also walks ridiculously slow, so a running button brings him up to a bearable speed. You can’t run all the time because, surprise, the Wakcha hear your rapid footfalls, so you’ll also spend a good amount of time creeping along in a sneaky fashion to avoid murder. 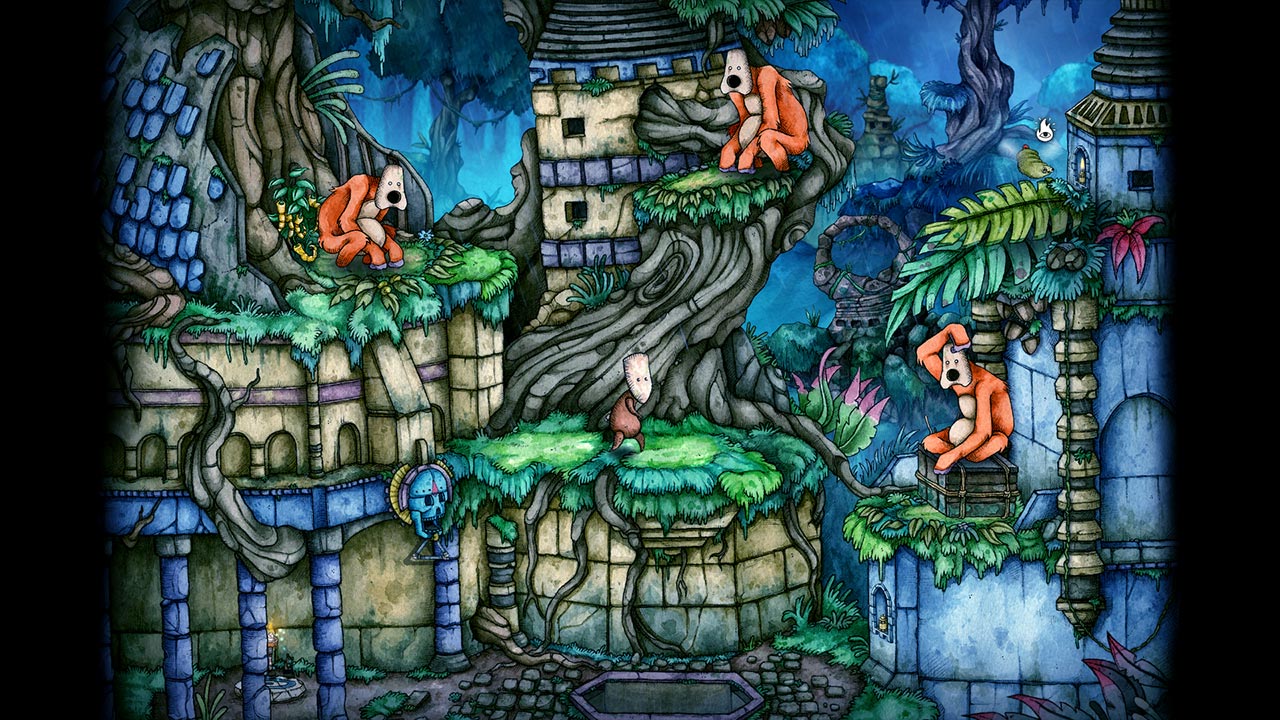 And there’s a lot of murder in this game. That’s something that immediately jumped out at me about Candle: you’re gonna die. You’re going to die a lot. You’ll die so much that you’ll genuinely find it unfair, until you realize that most of the time your respawn coincides with your progress you aren’t reset TOO much. You see, there are two ways that a player dies in most games. Either they get killed because they’re careless/less skilled, or they get killed because the game fully intends to kill you. Games like I Wanna Be the Guy are more in the secondary category due to environmental hazards and totally unexpected attacks coming that are essentially unpredictable. Candle has zero issue presenting in this fashion, which may be a turn off for some players. I personally was pretty upset when I jumped onto a ledge and got stabbed by an unavoidable spike hazard, and then got stabbed three more times until the narrator condescendingly clued me in to my survival tactics. Once he said something and I noticed the innocuous painting that foretold my future, it became painfully obvious, but it absolutely would not in other circumstances, especially because the safely trigger is a background item that appears in many other places and does nothing in those other places.

Right, the narrator. Candle is kind of half-assedly committed to the nonverbal storytelling, arguably because a lot of the story needs words to actually explain what’s going on. We have a rather pleasant narrative voice that chimes in with various signposts, either explaining what Teku is looking at, what Teku heard from an NPC, or generally trying to be helpful and ambient at the same time. As much as I take issue with the narrator, I can’t ignore the fact that he’s got a great voice for the game and is indispensable in guiding you through the game. I guess I just look at the presentation of Candle, and what it’s going for in terms of storytelling and atmosphere, and it just feels like it takes me out of the moment when someone’s dulcet tones need to wiggle their way into my ear canals. Additionally, all of the narrator’s exposition is tied to a non adjustable block of audio that cannot be controlled in any way, just listened to or skipped. If you’re like me and you turn on the subtitles, you’ll read the sentence before Narrator even begins speaking, hit the button, and then accidentally skip over the rest of the explanation because the dude just talks too damn slow for me.

So what about the game itself? Candle really leaves me in a bizarre scenario when trying to unpack how my core experience went with this whimsical and almost mythic quest. There were some excellent points that came up throughout the several hours that I invested. For one, the artwork really is gorgeous. I know there’s this campaign to bring back more hand drawn animation in all works of life, and I think that we might accidentally pay homage or give accolades to works that are usually subpar but just happen to exist at the right time. Candle isn’t one of those games. Starting out in the wilds and jungles and working his way into a colorful, almost Aztec style city, Teku explores some really amazing areas, and I love the little details in the animation, from the constantly flickering color scheme to the vibrant and explosive choices for things like chieftains, flowers and other background and foreground notes. Visually, Candle is an absolute feast, and could be worth the price of admission for appearance alone.

Additionally, the way that puzzles occur and present themselves are refreshing and interesting in comparison to what I expected. Sure, Teku has plenty of instances of simply trying to figure out the scene in front of him as to what he needs to do next, but more than a few NPCs and random artifacts turn out to be intricate puzzles that need to be figured out before going onto the next leg of your journey. It’s pretty interesting to have actual puzzles dropped at your feet for you to figure out, almost like the game is nodding vigorously and affirming what they’re trying to do with the player. You will solve puzzles, work out numerical sequences, fit pipes together and all that jazz. It came as a welcome break from the area based puzzles. 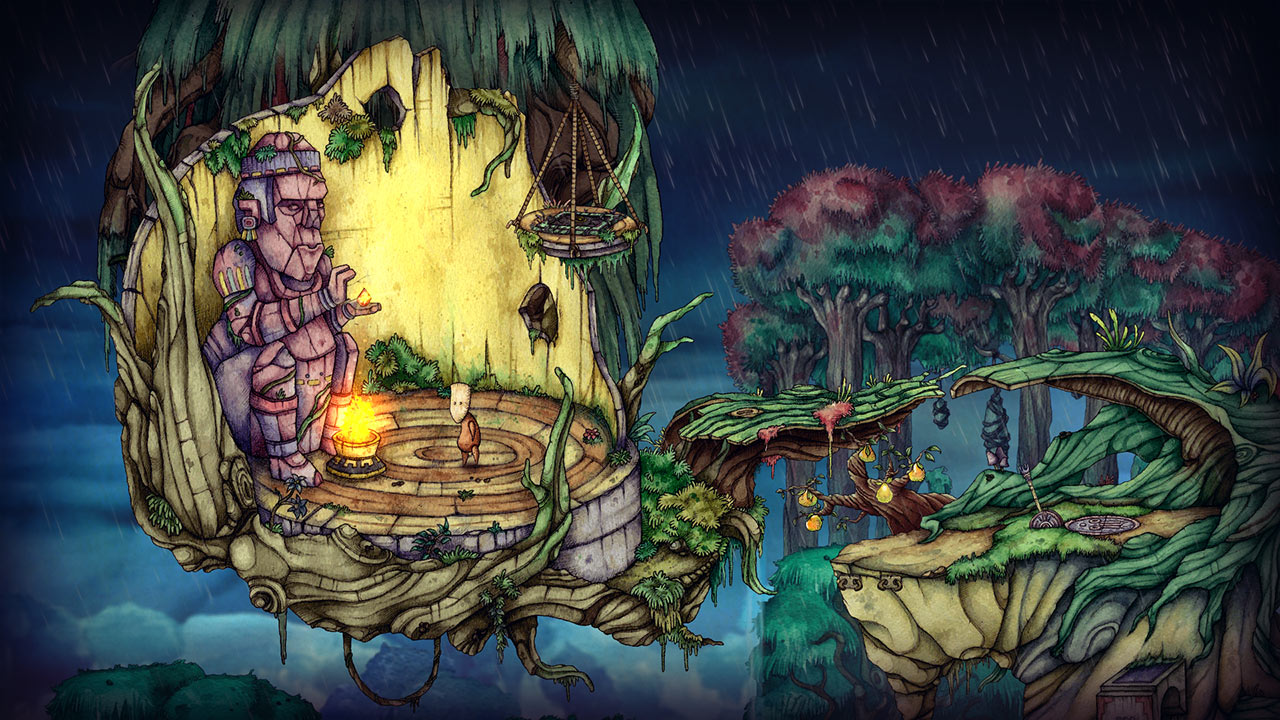 On the other hand, Candle definitely has some issues and problems, primarily in the area of performance. So this game has existed for over a year and a half on Steam, although the PC publisher (Daedalic) and the console publisher (Merge Games) may not have compared notes. Additionally, the Nintendo Switch isn’t bleeding edge anymore: thousands of games have now been released, both physically and digitally, and optimization is key. I may not have been totally on board with the gameplay of Tanzia, but I’ll be damned if it wasn’t polished to a sheen for the Nintendo Switch. By comparison, Candle is a bloated mess of a game, coming in at 3.5GB and absolutely CHUGGING in some areas. I had synchronization problems with subtitles showing up long before the narrator decided to start speaking, which only fed further into my frustration with the speed of exposition. You disconnect from the beauty of the game when things start to drop frames or stutter. The devs did mention some camera blocking issues as well as Unity stability issues, and the hope to fix these with a day one patch, so fingers crossed that it manages to clean everything up prior to release for the public.

Lastly, I wasn’t thrilled with the pacing of how Candle’s puzzle environment unfolded. Though it gets a little more clean-cut after the midway point (for me about six hours in), the first half of Candle has almost a metrovania feel to it. There were a lot of point where I would wander into one area, couldn’t do something, go back to another, figure out more about puzzles or ideas and then double back to where I had already been. Speaking to players who’ve enjoyed the game on Steam before, they say that it’s basically part of the process: you learn where you should go first, in what order, in order to get better returns and faster routes. But that doesn’t make any sense to me: I get speed running, but speed puzzling? I don’t want a game to be perfectly linear because that harkens back to the old, one way scrolling titles, but feeling directionless in such an adventure is sort of frustrating. There’s not enough dialogue or interaction with NPCS/environment to lend easter eggs in the exploration, nor is Teku a charismatic enough protagonist for me to simply be happy to watch him gambole about. It’s a give and a take, and it felt like I was giving too much leeway to create the experience the developer wanted.

Candle: The Power of the Flame is charming in a certain aspect that may appeal to players of adventurous puzzling nature. There’s a lot here, and it’s well presented, varied and unique enough to stand alone without being compared too heavily to other puzzle adventures. Still, technical performance makes it a little lackluster, so I hope Merge Games can iron things out to make for a better situation overall. My own displeasure with the exploration was overwhelmed by the story and puzzles, so I think it could still work out well overall. If you didn’t get Candle on the PC already, the console may be the place to go: just please bear the Switch’s performance in mind.