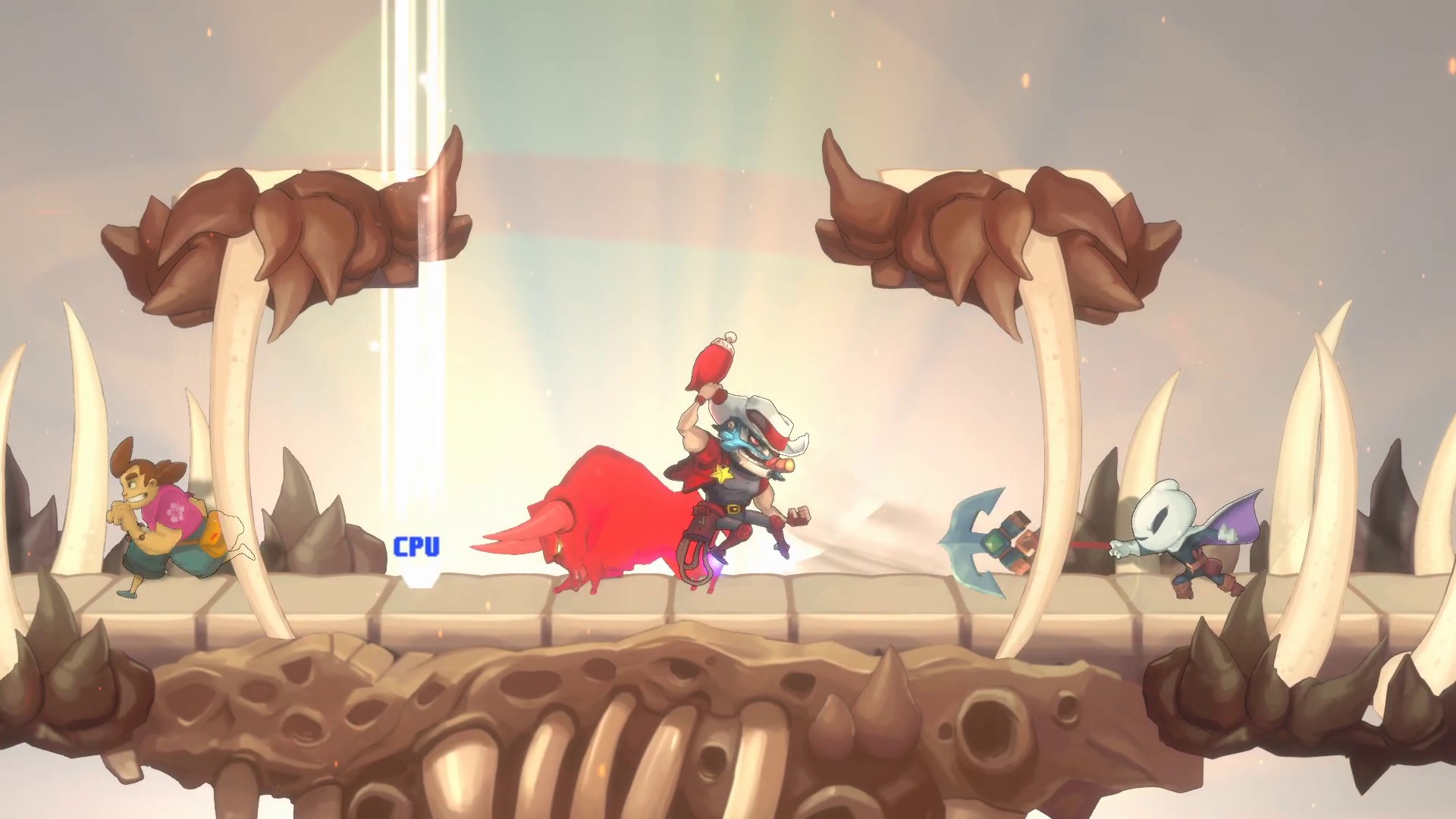 Over the years, we’ve seen indie fighting games take to centre stage and really show off what can be done. The fighting genre isn’t just a big brand name any more: sure, Nintendo and Capcom and Midway have some strong entries, but we can’t sleep on games like Rivals of Aether, Skullgirls or Brawlhalla. People have invested a lot to pay homage to great fighting games in all different perspectives: hell, we just saw Shaolin Vs Wutang, and that may have been a bit flat but DAMN it was fun. And I love the idea of indie devs coming together to support each other, guest appearing in each other’s games and creating great Easter eggs and crossovers. So for Dark Screen Games to gather up a ton of fantastic indie IPs and bake them together into a single fighting game, it sounds like a frigging paradise. Dead Cells Vs Guacamelee Vs Owlboy in a 2D fight? It’s so damn exciting and the possibilities seem limitless!

But no. The possibilities are limited. Very, very limited, as it turns out.

Let’s start with the highlights of Bounty Battle. With all honesty, the roster of fighters is robust and exciting. With over thirty characters to choose from, you’re bound to find someone you might enjoy as a main character to represent your favourite other indie titles. We got Darkest Dungeon, we got Panaku, we even have Blocks That Matter to show that everyone is included (well, not Everyone, but you get it). The developers also graciously included a handful of original characters who fit in well with the universe in terms of presentation and dimension. That is to say, all the original characters are a bit grotesque, but they work, and they also help to round out the Bounty Battle Signature Set, which has four enamel pins with it that feature these characters. I guess we could get the rights for Nuclear Throne to be in the game itself, but not to then present the mutants as additional swag. Hey, anything original shows promise, so I’m game for it. 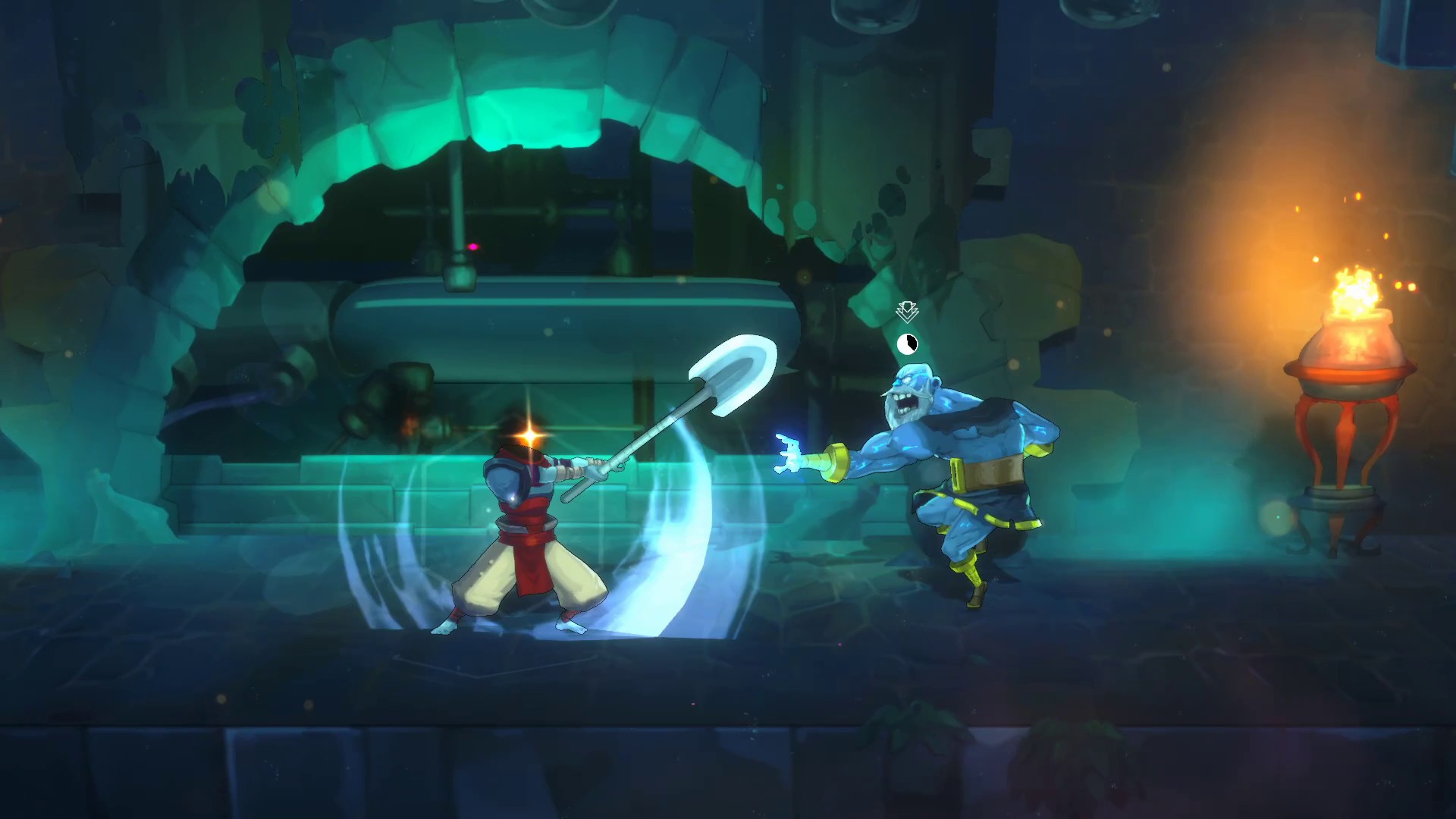 The fighting within the world of Bounty Battle is very, very simple. Like dirt simple. You jump around with the A button (not B, for some reason) and you use Y and X as different strength attacks, with ZR being a super powerful attack that uses up some limited energy (Bounty Points). You can do aerial attacks, push two buttons at the same time to do a slightly different attack, and that’s basically it. Full disclosure, a lot of Bounty Battle is button mashing, and that shouldn’t work and it does, but it does. In that regard, perhaps almost anyone could walk up and appreciate the game, figuring out how to play and how to make things pop within a mere number of seconds. Combine that with the large roster of characters, that’s something that maybe kids would be interested in, but that’s still a tough sell. All the characters are from indie games that most children haven’t played (Look, Johnny, it’s Death’s Gambit!), so that appeal might not pull. I mean..it’s still a lot of characters.

Alright, the curtain comes down: it’s time to be honest. Bounty Battle is a mess. The game incorporates a lot of glitchy looking screen effects in order to convey this idea of some kind of temporal error happening, which helps to sell the single player storyline and explain why all the other characters are here and why they’re fighting each other. The glitchiness, though, then translates into a lot of screens tearing during the loading screens, and then brings us into a realm where the gameplay feels sluggish and stilted. There’s no delay, but there’s this lack of urgency in the fighting, like everyone is just sort of going through the motions. After all, they just got brought together to fight each other, so maybe they’re reluctant.

The problem is, we’ve already seen this setup before and done better in a game called Blade Strangers. No, the lineup wasn’t nearly robust enough, but it was legitimately a good fighting game that took nontraditional characters and matched them up, creating unique styles that made the combat work. With Bounty Battle, everything is the same with a different hat or a coat of paint. Hit. Jump. Hit. Super Hit. In one to one battles, it’s positively boring, and the AI is dead simple, allowing even the greenest fighters or worst players (i.e. me) to get all the way to the ending with little complication. This doesn’t work much better in a larger brawl mode, mostly because now you’re fighting three scarecrows instead of one, and you’re still going to be the victor even if they get a lucky shot or two in. They aren’t totally inert, don’t get me wrong, but there’s no strategy or thinking present: they tend to just rage toward whatever is closest to them, which, more often than not, is each other, and the success of this approach is, well, nonexistent. 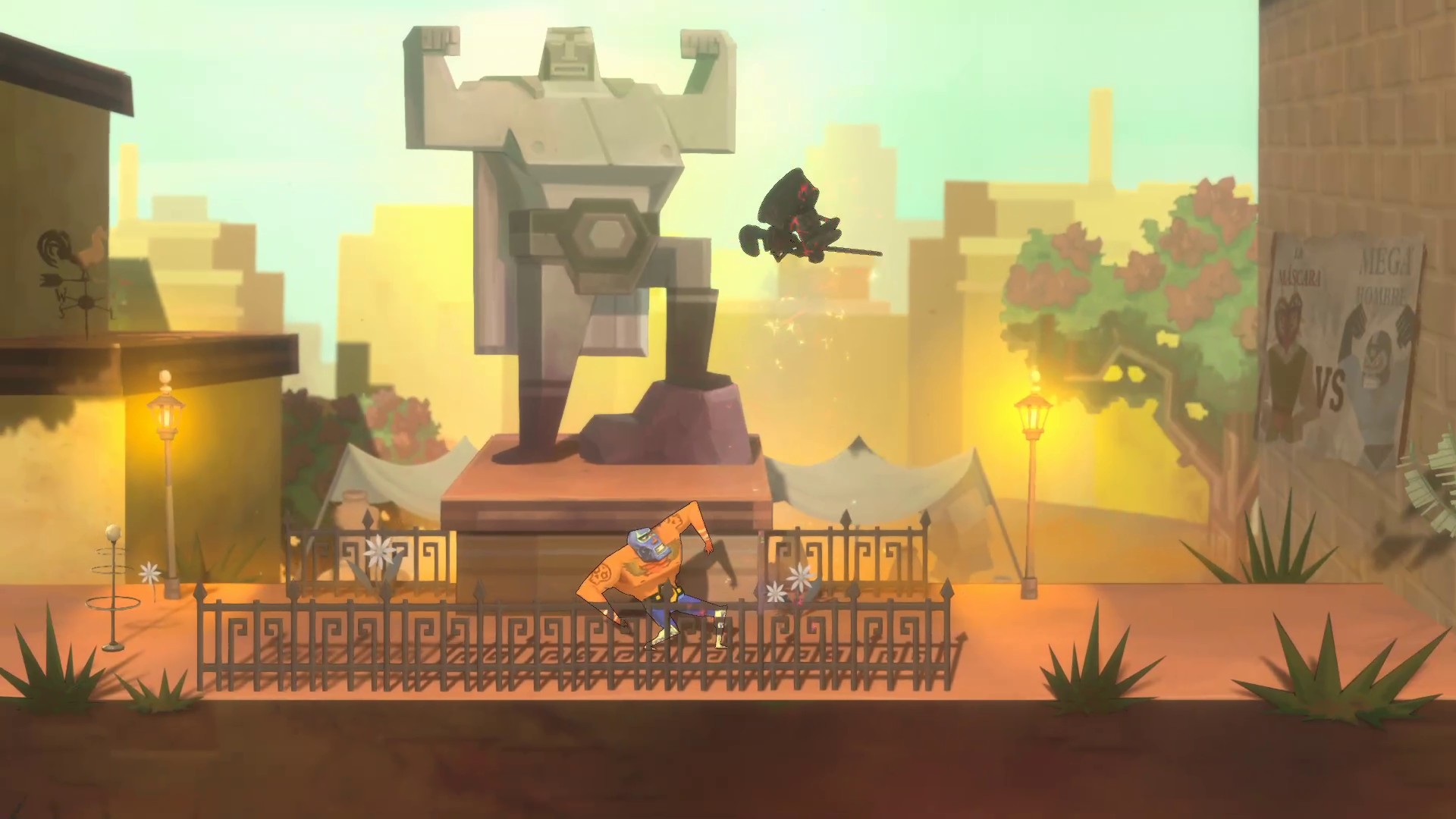 So the game doesn’t look great and doesn’t run great. At any other time, this would be bad, but not totally indefensible. But Bounty Battle has a particularly glaring issue: no online multiplayer. This is a fighting game, released after 2010, and available for every modern console and PC that you can imagine. Forget the current pandemic that makes local multiplayer a scarce issue as it is, because that’s hopefully just another couple of years of trouble for this game. A ton of players who want to get this game and figure out the ins and outs are probably eager for matchmaking so they can square off against new and different players. They want to see what the world has in store for them, and going down to the local arcade or whatever will find people perfecting their Tekken combos, not diving into the next offshoot title. This game is designed to find people who like indie games and like fighting games and are willing to take a chance on something that’s ambitious but untested. Instead, it’s plopped into the laps of players with a decent soundtrack and game sprites and that’s it. You want to fight someone in this game? Go find someone, we don’t have time to help you out.

It’s clunky. It stutters. And, frankly, I’ve seen videos: it looks way worse on the Nintendo Switch than it does on the PC and PS4, so I’m also jealous. Bounty Battle seems to have been rushed out the door at a time where everyone and anyone are agreeing to push back their games until they’re properly finished in order to prevent exactly what we’re seeing here. Oh, this was already delayed four times? Then it should have been delayed a fifth time. The killing blow is that it just handles badly, even without the fighting. Thanks to the glitches in the appearance, there’s a delay and an oddity in the menus, so trying to navigate and even quit a battle feels like a chore. The Nintendo Switch isn’t known for getting timely updates, so, if and when this game is patched, the Switch players might not see it for a while. That’s also a big if: why the hell should you bank on a game “eventually” becoming good if it’s bad right now?

I love indie games. If you see a character in Bounty Battle that looks interesting, go seek out their source game: Bounty Battle does a good job of giving the names and the game’s origins of everyone involved. But don’t waste your time or money on this thing. Someday it might be good, but that isn’t today, and this isn’t a beta or Early Access. This is a live release that’s more expensive on the Switch, looks worse, and is less likely to get saved if anything is done to make it presentable. If you must, wishlist it and wait until there’s a huge price drop AFTER a huge update. Until then, grab your action figures and make them fight in your bedroom: the outcome is less predictable, and the framerate is a lot better.

Flat combat on flat playfields with absolute painful playback equals a fight to the finish of my time with this game.