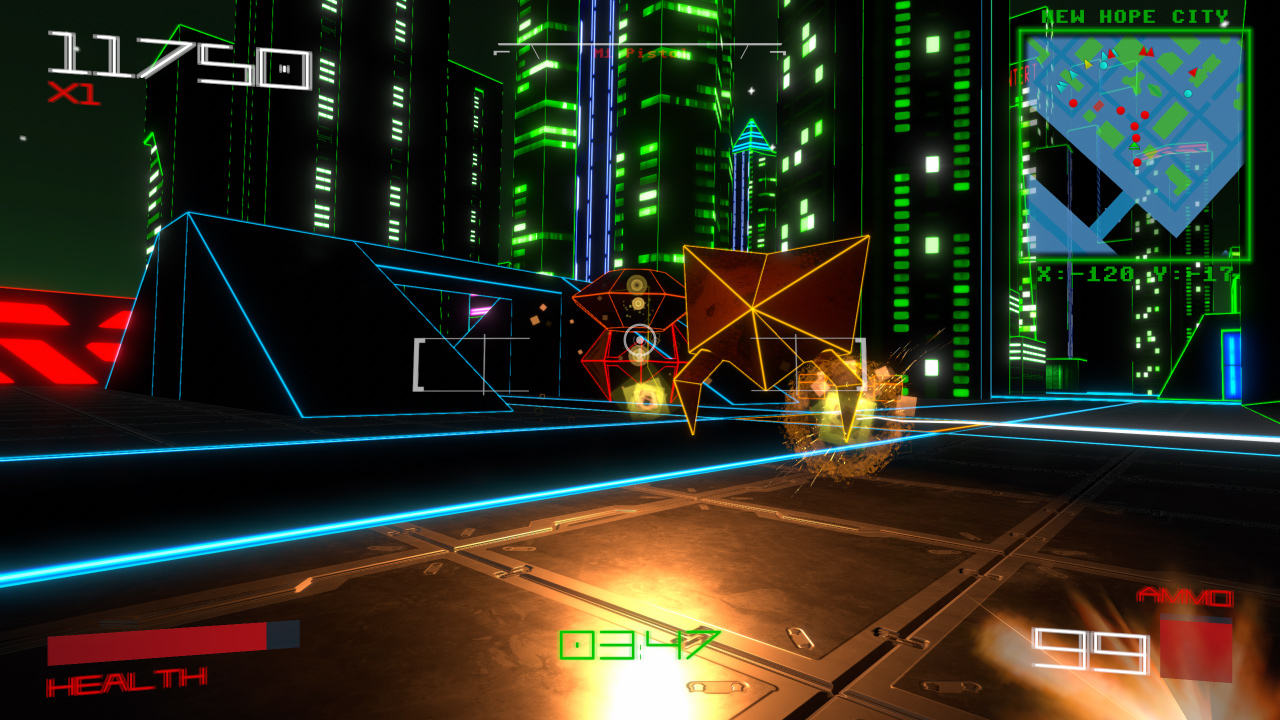 When you look at the advancements of technology within video gaming, the one thing that really stands out is the picture-art galleries of how much graphical presentations have changed. Today we live in fully fleshed out, third-dimensional worlds that live and breath amongst the hail of our bullets or expansive adventures of exploration. However, when it comes to ‘retro’ games, just because they had a more basic representation in their graphical prowess, it doesn’t mean that they were any less playable. In fact, these days, by merging retro graphics with modern playability, they quite often result in a recipe that is largely successful, something that is prevalent when you play Super Icon Ltd’s Vektor Wars as it launches a release onto the Nintendo Switch.

Inspired by the eighties retro-look of vector graphics, the game is presented with a series of neon-soaked environments and wire-framed models. If you think of the original Star Wars Arcade and partner it with Battlezone and Robotron: 2084, then this would be the love-child of such a merger. The story, if you can call it such, revolves around you playing the role of Commander James Moses, a Space Ranger, who has been tasked with destroying an army of death robots, as well as rescuing a series of Robodudes in order to save the world. I say story as such, as this is primarily an arcade shooter rather than an adventure, but it’s still nice to have a name for your protagonist and a reason to kill the bad guys.

The game comes with a variety of game modes, although the central core remains the same: shoot the bad guys; although there are some minor variants to help mix things up a bit. You can choose between Story Mode which takes you on a journey through nine world zones. Next up is Arcade Mode which is as it implies, then there’s deadline which is a timed level in the battle for the highest score. This is followed by Sequence Mode which is a quick-fire game with an overall play-time of ten minutes and last, but not least, there’s Survival Mode. Although the central premise around each mode remains the same, each contains a number of variants such as limited lives, time constraints and wave-based challenges. 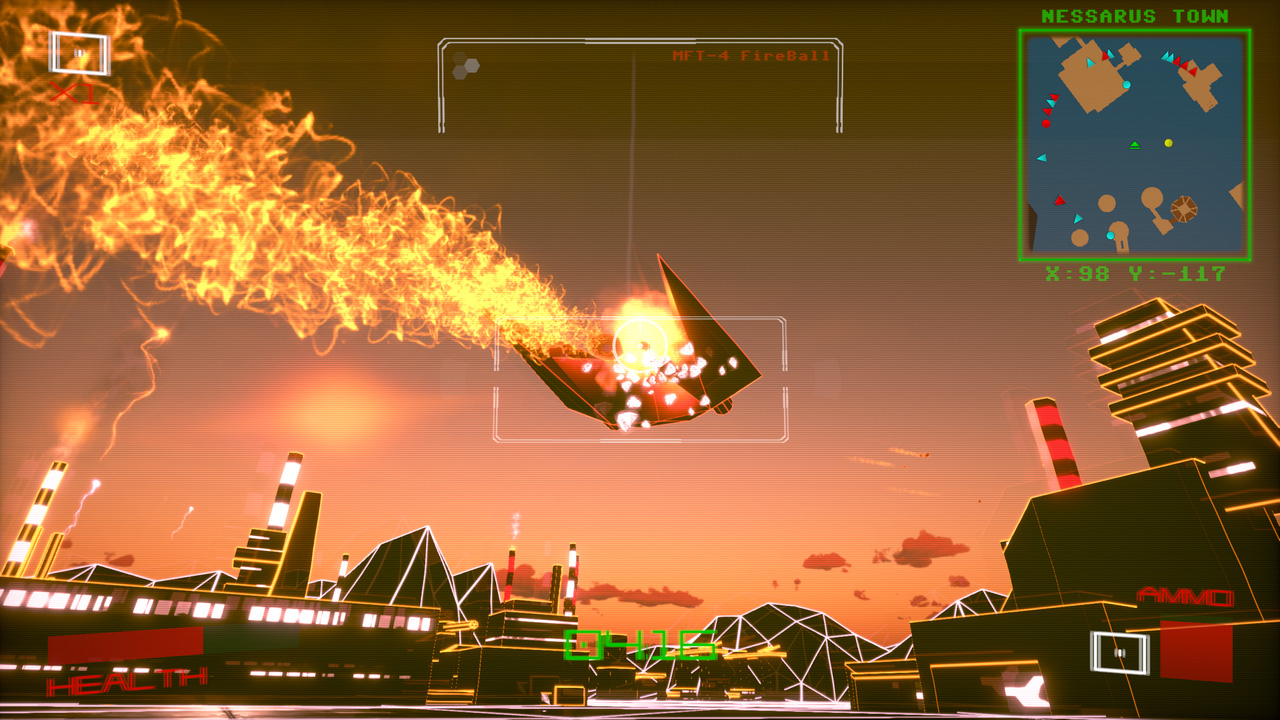 Despite their similarities, each mode does offer its own unique style and challenge in how they play. However, the core theme here is a simple blaster around a series of wire-framed environments. It’s a very distinct Retro-style, yet one that has been brought smack-bang up-to-date with some sumptuous looking neon landscapes and character models, as well as sublimely smooth level of gameplay that produces a silky-smooth and fast-paced experience for any would be Space Rangers out there. Whether you are playing a mode with a health bar or a limited variety of three chances, you explore each of the regions from a first-person perspective in order to hunt down the variety of aliens that come in waves.

Dotted around each of the environments are a series of pickups that offer health regenerations and a variety of different weapon-types. You start off with a simple blaster, much like shooting a pistol. However, with exploration you can easily upgrade to a mini-gun styled weapon, or acquire a set of missiles, as well as an assortment of other varieties such as shotguns. Also placed around each of the levels, lie a series of Robodudes, which are essentially little lost robots that wander around the landscapes. These come as a form of collectible which is denoted within each level.

However, as you may have already guessed, you are not alone within each of the environments, as a series of alien types also frequent these lands. Their primary objective is to destroy you, so it’s imperative that you destroy them first. The first initial waves don’t present much of a problem, but as you progress through each world, the aliens begin to spawn in a variety of guises, such as battle-tanks, UFO’s and robotic forms. They also pack an array of weaponry from automatic guns to missiles, and even laser beams and boy, do these ever pack a punch. Luckily, the pick-up points of power-ups and heath re-gens remain in the same place, so once you have learnt their locations, its always worth going back to replenish yourself. 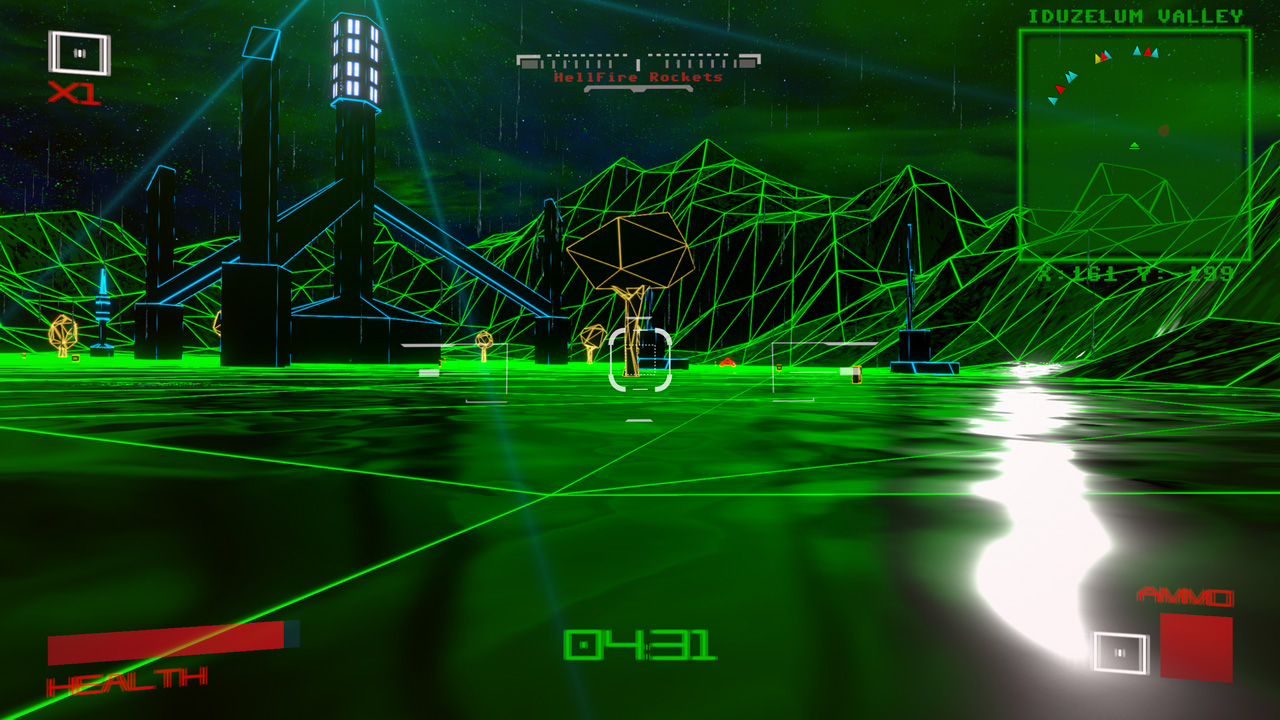 The action here is fast-paced and relentless. However, by taking out the enemies and collecting robodudes, you acquire score multipliers which make all the difference in your pursuit for the highest scores. Unfortunately, there’s no multiplayer aspect here, but there are, however, an extensive array on online leaderboards to try and gain a footing upon. The game also comes with a set of achievements that can be collected, giving you a set of personal objectives within each of the missions or game modes in which you play. It’s style of play and arcade roots make this more of a casual game that you can easily pick-up and play whenever your desire is to do so and in this respect, its arcade style really shines through.

The overall presentation of the game also makes it a joy to play, with a distinct polish that gives the environments a pleasing look and feel to them. Controls are smooth and performance is sublime, with a techno-synth soundtrack that perfectly matches the settings of the game. It’s vector graphics and modern implementations of gameplay provide a perfect backdrop for a silky arcade experience, one that is sure to satisfy us older gamers who remember the wire-framed arcades of yesteryear, yet holds enough modernity to keep the itchy trigger fingers of younger players invested into its gameplay.

Overall, Vektor Wars is another game that feels as if it was made for the Switch. It’s fast pacing and fluid movements makes this the perfect hand-held accompaniment for when you are on the move. It’s casual style, variety of game modes, as well as a series of collectibles and achievements also presents you with something to work towards and when these are exhausted, then its online leaderboards holds enough to keep its appeal over the long-term. However, if you’re looking for a game that holds a certain amount of depth, unfortunately you won’t find it here. What you will find though, is satisfying arcade shooter that’s an absolute blast to play.

Vektor Wars is the love-child of Star Wars Arcade, Battlezone and Robotron: 2084 and what a lovely bundle of joy it is too.