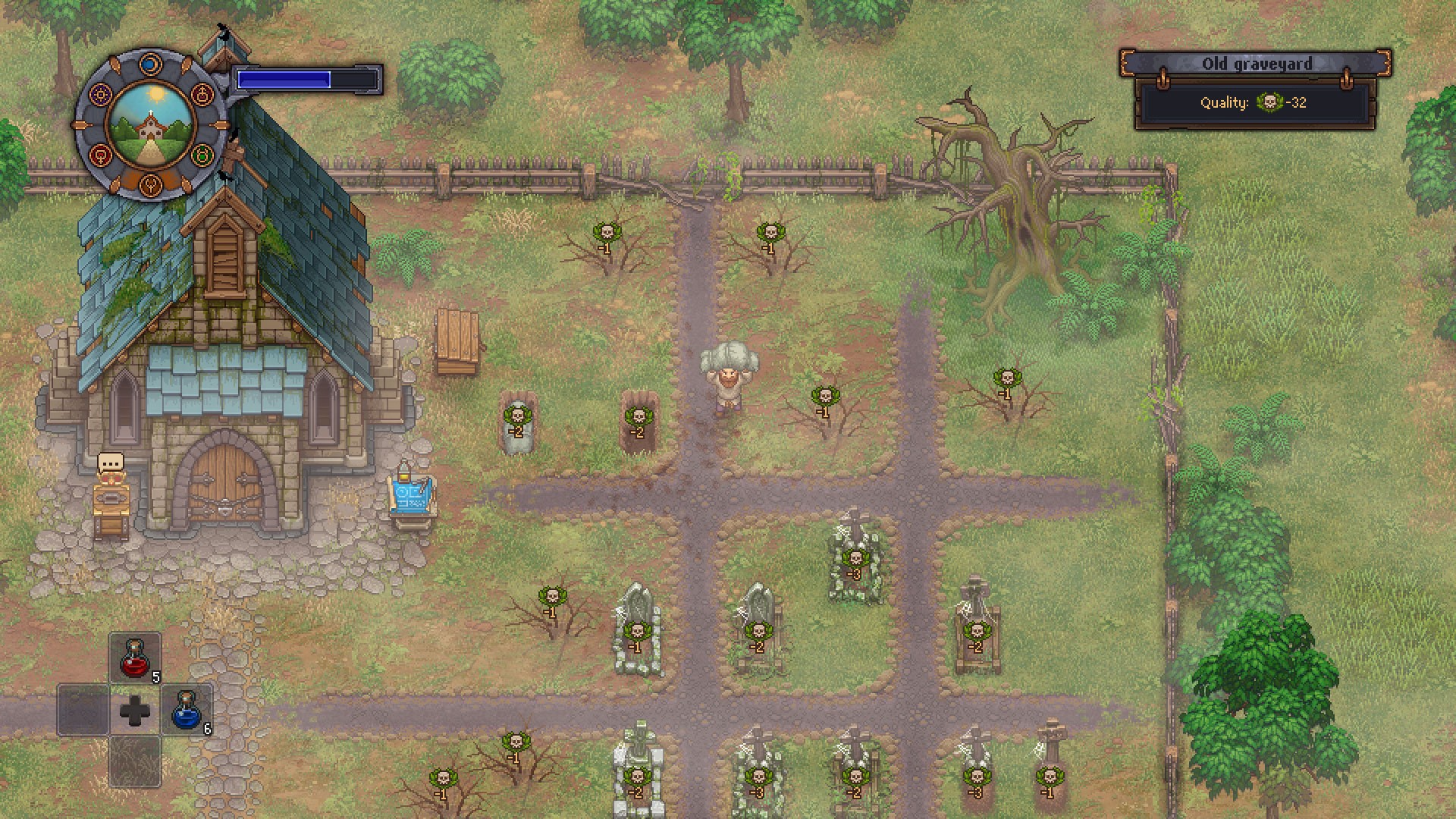 It is time to take a look at Graveyard Keeper and its DLC Breaking Dead, developed by Lazy Bear Games, and published by Tinybuild. For me I went into this really looking forward to playing a game that was going to be kind of like Stardew, just with graveyards. This was mainly because recently I have been in a management game mood. I have recently been slowly getting back into cities skylines, football manager, and was ready to go back to give stardew valley another go…. However sadly for Stardew valley, Graveyard keeper and its DLC was calling my name and I was more than happy to answer the call.

With Graveyard Keeper we start off with a little scene where we get hit by a car, and when we come to there is a figure in front of us that tells us that we are now the Graveyard Keeper, and that we should maybe dig up a talking skull that should be able to help us out.

At this point the game gives a little guidance on where we should go, and helps us find our way around. We asked to tidy up the graveyard in order to be able to be recommended. We are advised to go into town to talk to the bar keep. Now here is the thing, before you know it the help is kind of gone. No more arrow helping guiding your way, and no more hand holding … well to a lesser degree.

So here is my first and maybe my biggest issue/nit-pick, the side quests. Man the side quests in this can take time, and here is why. The game seems to link god knows how many of them together. Something that maybe should take you a small amount of time to complete, or at list any real time to beat them should be because of certain characters only being available once a week, or gathering/ making whatever it is that is needed. Nope not the case. You see in order to complete one side quest you may end up needing to do another.. and another.. and another. Now at times this doesn’t always get on my nerves, on other times they can be noticeably long for one reason or another. 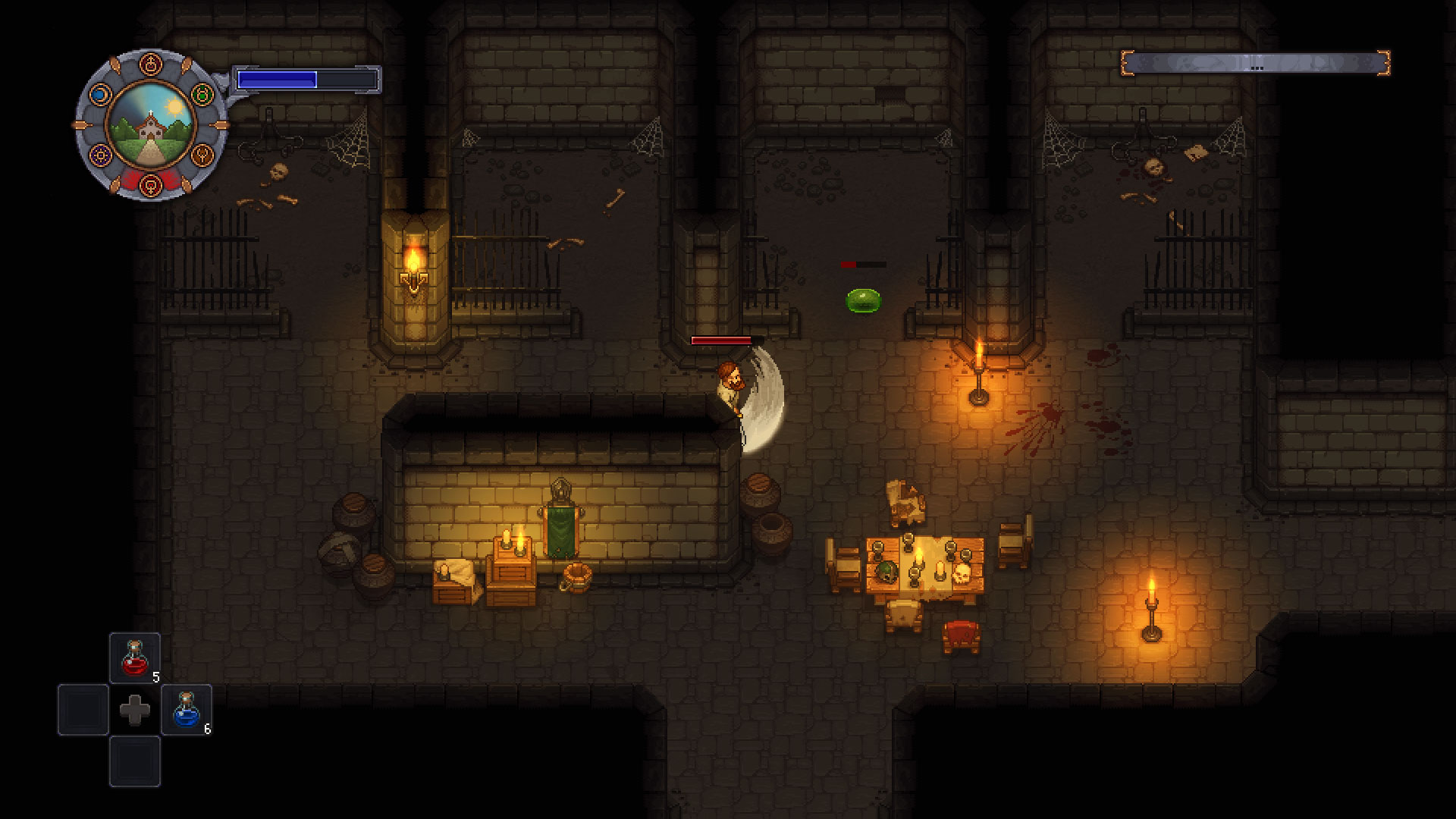 Due to this Graveyard digger at times does not feel like a management sim, with Stardew Valley, I just started up the game and kind of started to sort my farm out. No one handing me tasks that lead to another or anything, for the time I played I was rather happy taking care of my farm. Graveyard Keeper however tends to not have the feel that I was hoping for. I was looking forward to just running a graveyard .. not do a lot of quests. I felt like the quests at times were taking over what the game suggests it was going to be getting me to do.

Besides taking care of a graveyard, and doing side quests that will help towards you figuring out how the hell you are going to get back home… Graveyard Keeper, has a little bit of farming that can be done, planting things like wheat, carrots, and a couple of other things to help earn money.

Now when it comes to resource gathering and well other tasks that needed to be done around the place.. well with the help of the breaking dead DLC… you can now get zombies to help you. This can make things easier. However you will first need to reach the correct part within the game in order to start creating your zombie works.

So if you have played Graveyard Keeper prior to this DLC then you will know that putting your zombies to work isn’t going to be as straight forward as you would like. If you have not played Graveyard Keeper then let me just say this.. there is a lot in terms of the tech tree and things that you can build. This can be a another nip pick, things can be a pick over complicated, and feel like there is too many mechanics within the game. This is one of those things where it can be credit to the devs for making such a detailed game, and at the same time a bit over whelming for the players. 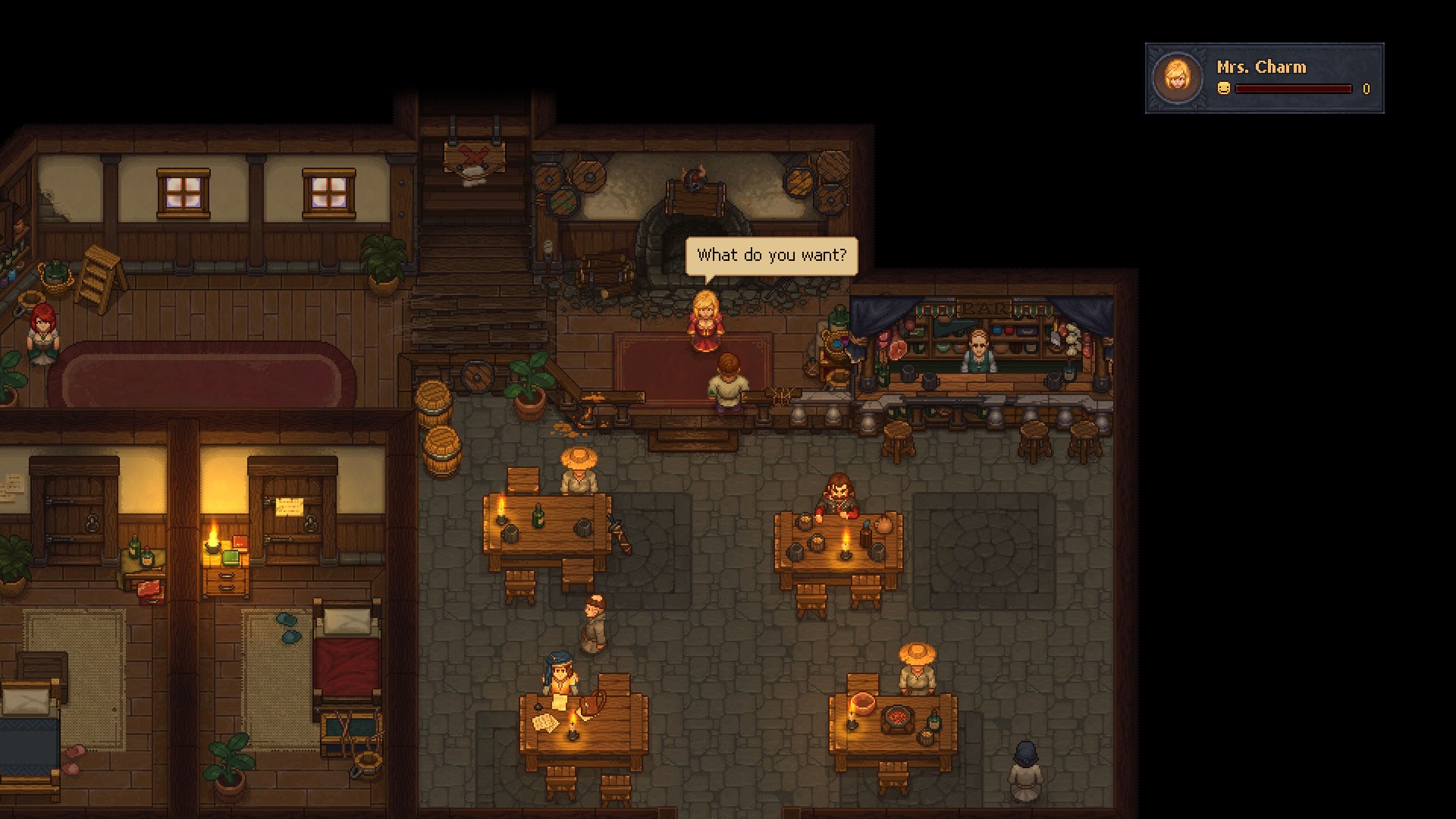 The Breaking Dead DLC starts like the Graveyard keeper game, you get a little tiny bit of help to start with. You get the information that is need in order to create your lovely new undead workers. After that however, is a different story indeed. It took a bit of time in order to figure out how to get my zombies to start gathering materials. At first I thought I could just place the zombie near some trees and my undead worker would, well get to work. This was not the case. It took a bit to find where I needed to go to place the zombie, then making sure I unlocked the required tech from the my tech tree. Once that was all done it was a case of building what was needed.

I have to admit, like most things within the game, it can be a fine line between annoying long winded, or rather enjoyable trying to figure something else out, being made to work for the end goal. This is what this DLC and the base game have in common. You always have to work to discover what you are meant to do, and it is rather enjoyable. I started by having my zombie gather wood, I then took the wood myself. I then learnt that I could get another zombie to actually take the wood for me instead. This is how it works. You learn bit by bit, and I am still learning. You can create a set up, so that the zombies actually sell your stuff for you. I’m yet to reach this stage yet.

I have become so engrossed with figuring things out. I enjoy at times working towards different goals in the side quests. I went on Graveyard Keeper with one night around half 7 at night, I had the intent of doing a couple of side quests, maybe work towards leaving. Only wanting to play for a couple of hours… I didn’t come off till around half 1 in the morning.

This is what Graveyard Keeper does so well I believe. It can grip you without you ever knowing it. The in-depth tech tree, and lack of holding the players hands, and the at times long winded quests… all these can at times become either overwhelming , or annoying, yet weirdly enough on another day these nit-picks can be what makes the game. Having to figure out what to do, going from one thing to another that will slowly be surely teach you something new can be so rewarding. All things that would help on a second playthrough.

My only real nit-pick that cannot be seen as a positive or negative depending on the player and there mood is, the grind in terms of resources. The amount of resources that you would need to gather for the stuff you want to build, and the quantity of them you will want to build can be a tad too much, however with the aid of Breaking Dead DLC this can be taken out of the equation once properly set up, as you can just get your zombies to sort out resource gathering.

Introducing Breaking Dead – the first expansion of Graveyard Keeper! Taking care of your graveyard’s garden has never been easier when zombies do it for you.