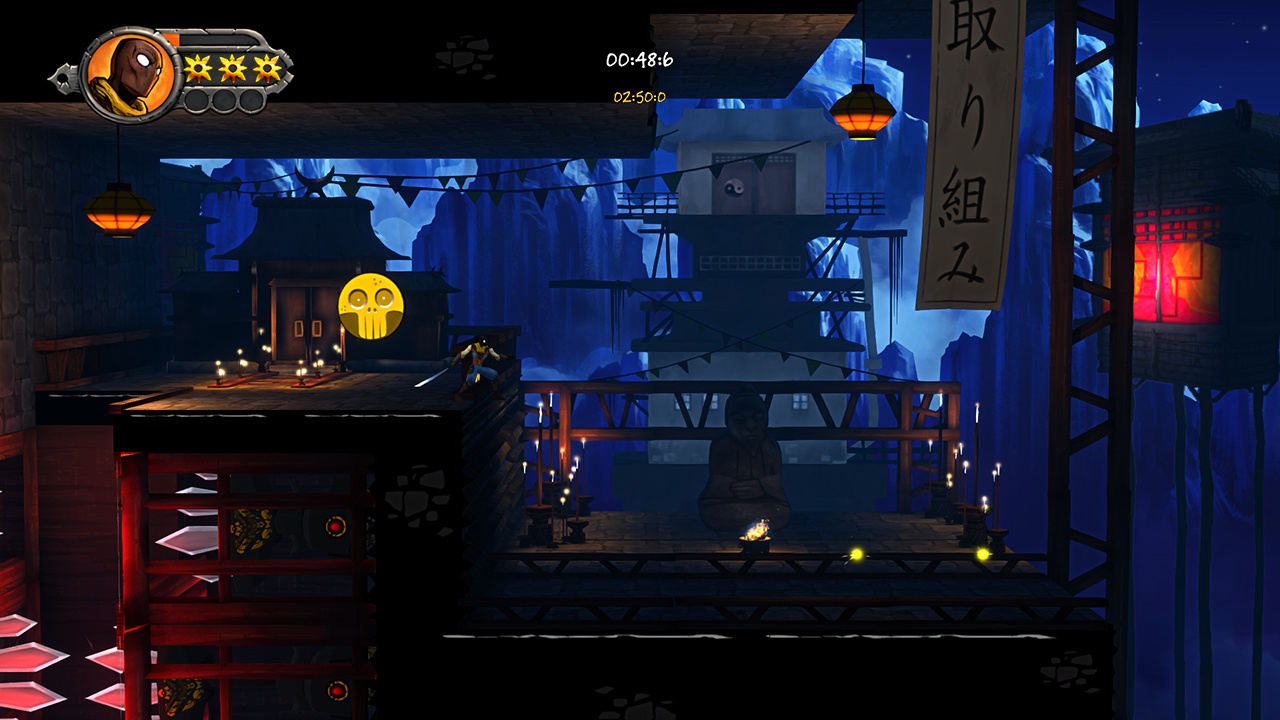 The transition from mobile to console is a difficult road, but not an impossible one. Whereas there are a handful of titles that get dropped onto more powerful machines with minimal effort to conform to a new arena, there are plenty of other developers who put a lot of time and pain into making their smartphone amusement into a full-fledged game. Shadow Blade: Reload is the console edition of the popular Shadow Blade, which incorporates a full regiment of visual upgrades, more complex and entertaining levels, additional challenge chapter and, most importantly, a commitment to making the ninja experience drastically better with button and control mapping. But does it ultimately make for the better game?

Shadow Blade: Reload puts you in the role of Kuro, a lone ninja warrior who is set on restoring the balance in his land, which has now descended into strife and chaos. You see, there are three ninja clans that’ve been mostly at peace for a while, but now someone is striving to attain ultimate power and rule over everyone, which is making people a bit…unsettled. Kuro must set out to confront the culprit and bring things back to the right standing, but the path is never clear, easy, or not full of traps and bad guys. Thankfully, as a fully trained ninja, Kuro has certain skills at his fingertips, namely shuriken and tons of stabbing. Oh, and some seriously sweet wall jumps and acrobatics in general. 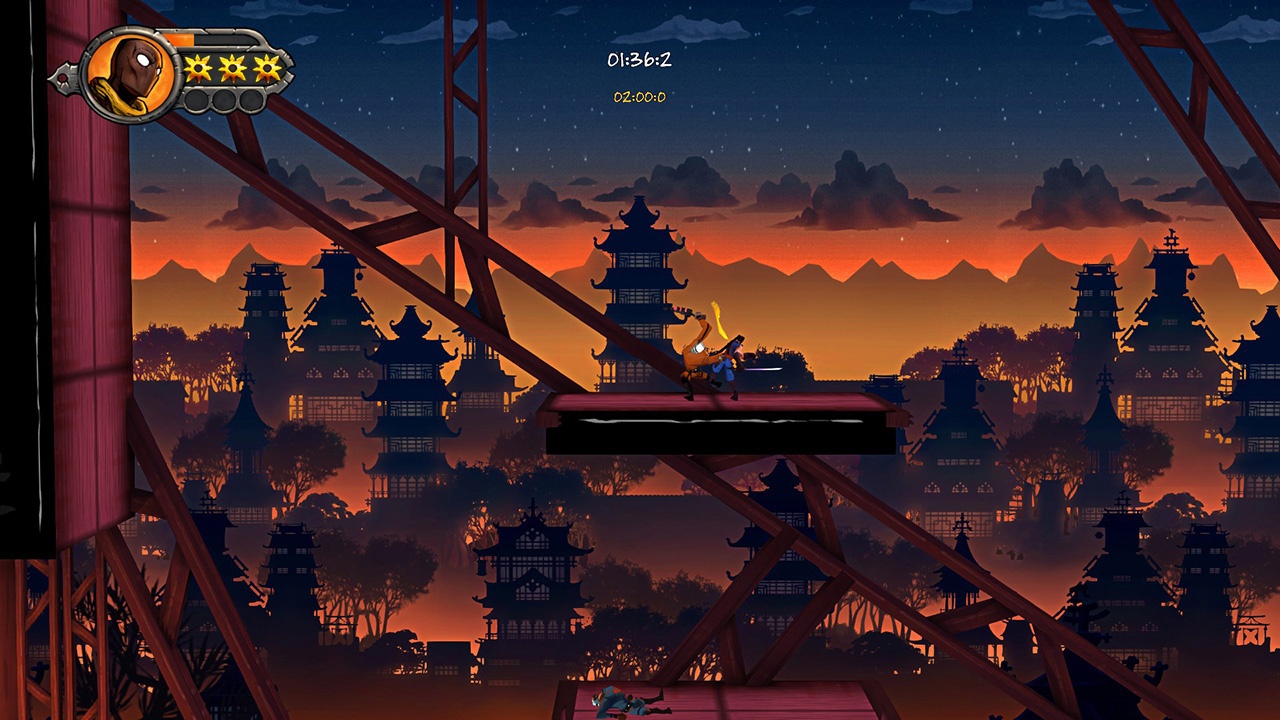 This is going to be an odd review because, intrinsically, I can’t find anything wrong with Shadow Blade: Reload. The game presents as a contained series of stages, each with set goals and ideas that are more vague suggestions than anything else. There are enemies to kill, traps to avoid, perilous places to reach and kanji relics to discover. Combat isn’t just being able to mash the buttons as fast as you can: you need to get through an enemy’s defense in order to make the stab, and, often times, the stealth kill is the way to go. The stealth killing is tons of fun, as you can do the traditional sneak up from the back, but you can also approach from other angles. Being able to drop down on a grunt and stab them to death like an avenging angel never gets old for me, and it’s something that you are shown how to do fairly early on. You can always rush straight at a dude who can see you, but the likelihood is that you’ll end up getting caught in a parry time and time again until either you get lucky or they end up stabbing you, making you respawn at your last save point/beginning of the level. Oh yea, that’s the other thing: no health meters. Make this work without taking a hit or die, try again, and then get a point penalty at the end of the level.

There’s also the matter of the shuriken, which are necessary and useful for certain ranged attacks, but also a bit cheap on another hand. You have an unlimited supply of these things that recharge based on the glittery ninja dust that you collect throughout the level, letting you carry three at a time but also promising there’ll be more if you’re thorough in exploration. The shuriken almost always land (very rarely does it get deflected), and three blades usually equals a death for the average bad guy. It’s not a prevalent enough issue that the game is broken, but, as a ninja, I want to focus on my stabbing abilities and not ranged plinking, yet that’s the secret to success in several instances where the normal fight would be repetitive and dull.

The level design is pretty decent as well, both in terms of enjoyment for time/investment and aesthetics. You’re in a sufficiently “ninja” sort of realm, complete with shadowy temple castles, the dark city skyline with occasional lanterns, and some perilous ledges where your can do one-on-one battle for dramatic moments. A majority of the stages give you a chance to look around and decide if you want to play in a linear fashion or try and get that 100% from the very beginning. There’s hints of where things could be hidden and how to get them everywhere, though the really good stuff (those kanji relics) are tucked away completely out of sight, so you gotta take your chances and really check where things may or may not be. I liked this aspect a lot, owing to the fact that it affords players two totally different approaches and rewarding both. The deep diver gets all the goodies and the nice check marks early on, while the speedster can see how quickly they can burn through the level, minimizing their kills and trying not to take any death penalties themselves. 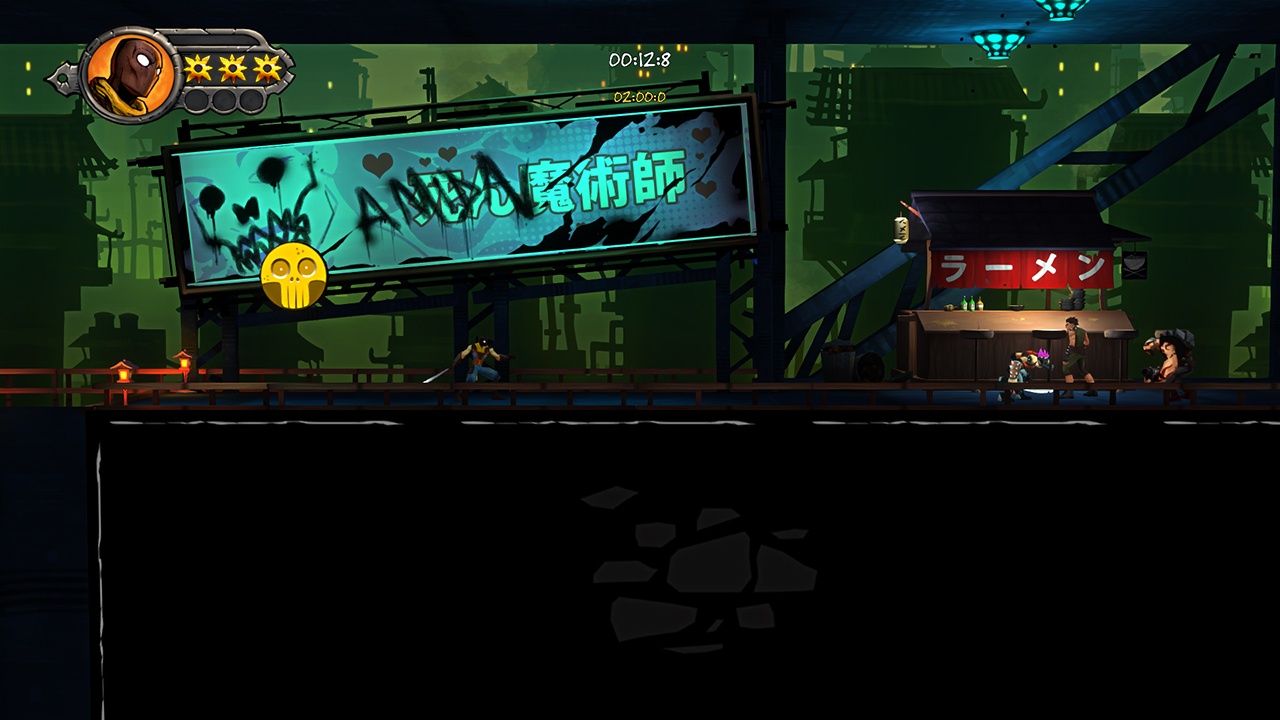 Once you feel satisfied with the main game, the challenges are a set of additional levels to test out your ninja reflexes and see if you can accomplish goals and tasks without dying once and doing it as fast as possible. Newcomers should be warned: the challenges are not ill named. These mini levels are freaking hard, and you should definitely consider playing through at least chapter four of the main game before taking them on. You need time to get good at double wall jumping, free fall shuriken, fast dash stabbing and a load of other techniques that probably have names but I don’t know them. The satisfaction from being strong enough to blaze the challenge levels is immense, so take your time (if you like the game) and get comfortable with Kuro before jumping in, because, once you do, it can take a good chunk of time.

The only real drawback of Shadow Blade: Reload is that it simply feels simple. There has been a ton of games out on the Switch so far, and they encompass any number of genres and styles, from stealth ninja games to dramatic puzzlers to story driven action games. Between Arigami, Mark of the Ninja Remastered, N++ and Puzzle Puppers, we’ve gotten a good number of awesome and enjoyable titles that cover a lot of what we see here (that last title might not exactly fit). This is something where, if Shadow Blade had been released first, then that would be a great starting point and then we can build up to these other titles. However, since the others already exist, and I’ve already played them, this is just sort of humdrum and standard. It’s not BAD, not even close, but it’s just not exciting for me. I think it has a place in the libraries of people looking for a good amount of play value with some blood, some technical performance and some shorter snapshots of enjoyment. It’s not a big time sink, but it’s also not the worst use of an afternoon or a couple days. It’s exactly what we thought it’d be: a mobile game, grown up, ported to the Switch and infused with better graphics and ideas than it’s older brother. If you’re intrigued, I say go for it, but, if you already own those other titles, this one might be just a bit flat.