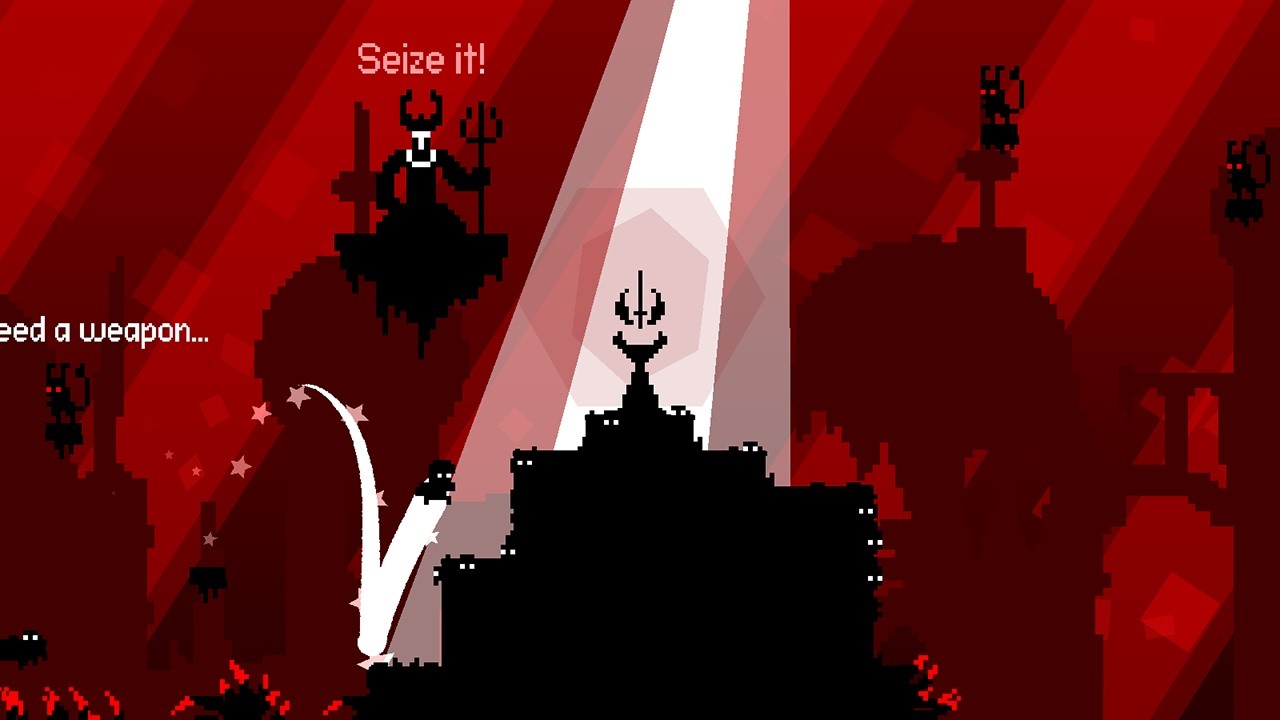 If you take nothing else away from this review, I beg you to please consider how this game was introduced. Electronic Super Joy 2 is the sequel to Electronic Super Joy, which some of you could probably discern just from the title. It’s an indie game that was made over seven years ago, but only came to the Switch last year. I didn’t get a chance to play it, but that was also because I played it originally years ago when Humble Bundle packaged it together with some other games. Still, I felt like I remembered it somewhat pleasantly, so I decided, “hey, sequel, let’s see what’s going on.” So I loaded up the game.

You’re immediately greeted with tons of warnings about everything that can and will go wrong with Electronic Super Joy 2. It’s got flashing lights and pulsing music, so seizure warnings abound. Then there’s a content warning about pixel violence, blood, orgasm noises and the Devil. This is like they literally crafted a warning sign to get teenagers to try to sneak in after dark in the setting for a 1980s horror film. Despite these dire warnings, I set my jaw and loaded up a game, at which point I’m greeted by the following words.

The Devil has a sexy butt. It’s made of solid gold. And it grants wishes. Of course, you’re going to try to steal it.

That. That was something that someone put to paper, looked at it, nodded, showed other developers, who nodded, coded that into a game, which the publisher then nodded for, and sent it to Nintendo’s QA department, where some dude who has to send games to the millions of players around the world, many of them children, also saw, thought, and nodded. 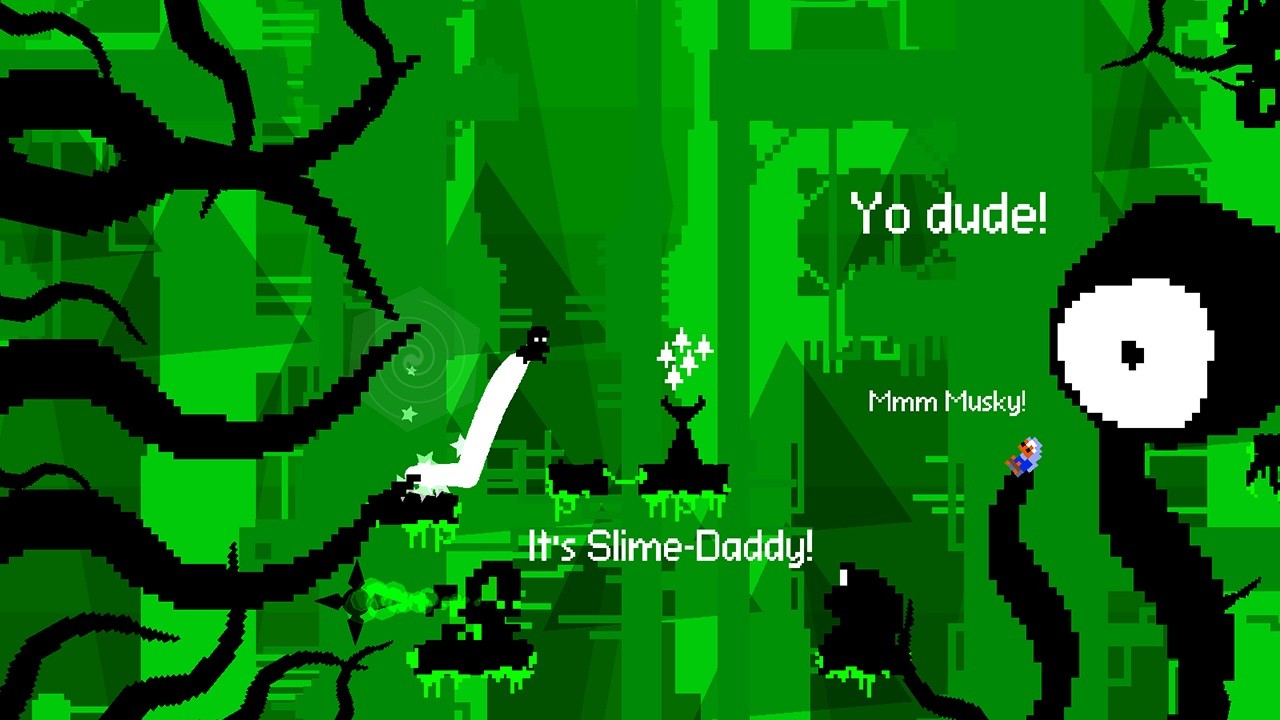 We live in such a fantastic time.

Electronic Super Joy 2 is a punishment simulator disguised as a musical platformer. In each of many, many stages, you need to get your little dude across the level of Hell (I assume you’re in Hell) to reach a portal on the other side. Given that it’s Hell, the levels are constructed to be as difficult as possible, both in design and also in visuals. The stages are hard with tiny platforms that you need to land on, plenty of hazards that you don’t need to land on, and enemies who are headstrong about stopping you through murdering you. They run into you, they throw projectiles, they shoot super unfair homing missiles, and they’re generally jerks. The levels also are peppered with what I assume to be damned souls that insist on making terrible jokes while you’re attempting to work, but thankfully those jokes about cows are just text bubbles that are unobtrusive and easy to work around. Though do take a moment to read them, they always at least got a smile out of me, if not a full fledged chuckle. You need to hit checkpoints along the way as spawn moments, because you’re going to die. A lot.

In order to survive Electronic Super Joy 2, you need to be a straight up jack of all fast trades. At the start of each level, you’ll lose any and all power ups that you got in the previous level, and the power-ups needed for THIS level might be right at the start or further in. So even though you may grow to love the double jump or the super cool sword dash attack, they only apply to the level you’re in and then they’re gone. Keep in mind: understanding all the power-ups is the key to success. You don’t just get the butt slam because it’s fun, you get it because it’s the only way to destroy the enemies on the ledges you need to walk across. Now, if you need to kill all the enemies, that’s up to you to decide: maybe you can dodge around them. Maybe you need to slaughter these piles of pixels in order to get somewhere. That’s also up to you, but remember you’re in Hell, and they have no qualms about killing you, so don’t feel bad about killing them.

Once you finally start to feel good, that’s when the wheels come off. See, there’s one level about seven stages in where you get the idea “hey, I know what I’m doing!” and the game frankly and firmly reminds you that no, you do not. There is a sequence right when the little demons announce “No more hand holding!” that it becomes clear the true nature of this game. With no limit on how many times you can die and no expectations that you’ll enrage yourself enough to continue, the game throws the kitchen sink at you in a small checkpoint exchange. This tiny exchange involved four enemies, about seven platforms and one portal out. I died…twenty-seven times. In what amounted to no more than one and a half screens, it was the worst thing I’d done yet, and it just went from there. Electronic Super Joy 2 will toss you a bone and give you some “easier” areas, but they just lower your guard for what’s to come, and players will frequently forget about the whole “lose your powers” thing when you start a new level. I can’t tell you how many times I jumped into the abyss because I was expecting a double jump that I had not earned. 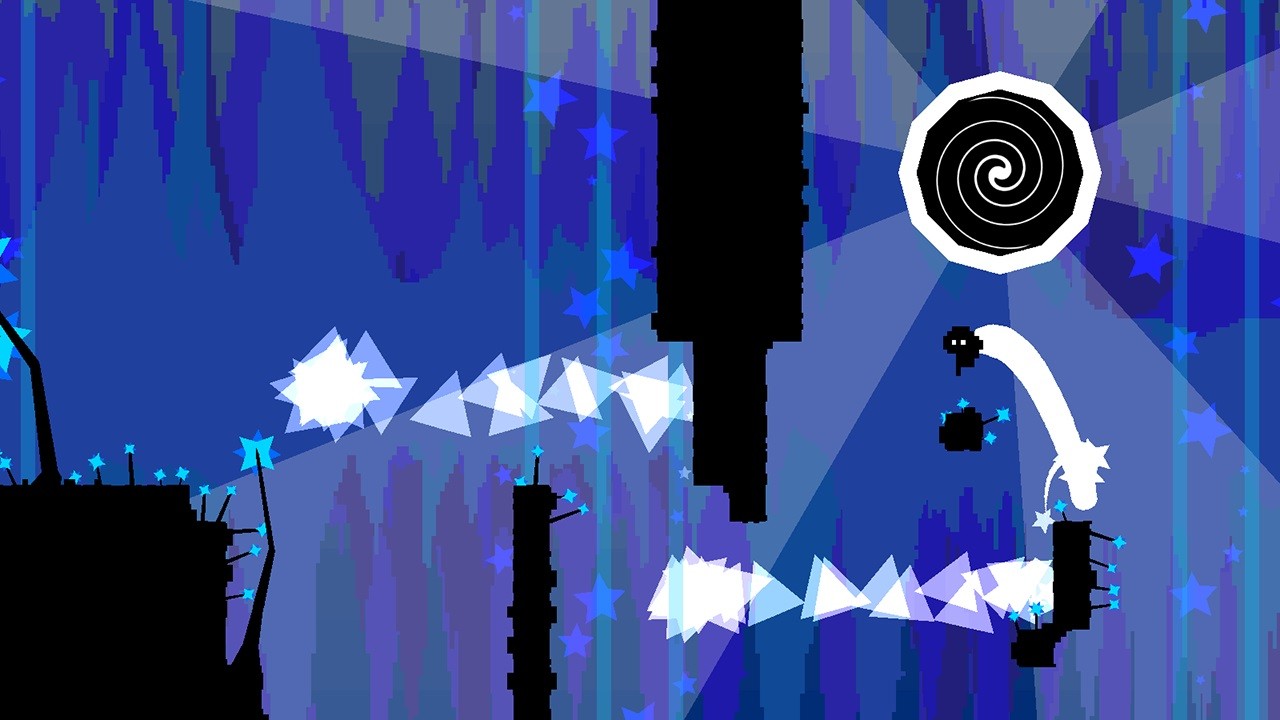 What really makes it work is that Electronic Super Joy 2 is a straight up sensory overload. There’s a good reason that the warning appears before each play: it’s necessary. The lights explode and flash all over the place, with defeated enemies and projectiles becoming new strobes within the world. The music is, as you may have guessed, pounding and pulsating, enriched with energy and life and almost standing in stark mockery to your miserable fate. At one point I was reminded of The End is Nigh put through some kind of opposite contrast filter, and that seemed fitting for what I was experiencing. The fact is that, sometimes, when you die, you come back to a groan of pleasure from somewhere, from someone. Sometimes it’s a dude. Sometimes it’s a girl. But hearing the game gives you an emphatic “OH YEAH” every time you fail is a psychological attack that I was not ready for, but really thought added to the personality of it all.

Speaking of which, don’t expect a gorgeous game. You can tell from the screenshots, but Electronic Super Joy 2 is some chunky, messy pixel work, and it fits perfectly with the motif of the game. For one, I wouldn’t expect this experience to be clean and full of tight angles: that’s up to the player to decide how they’ll navigate the world and be clean all on their own. In that same vein, the slightly amorphous layout of everything gives plausible deniability for your own shortcomings. Did you really miss that jump? Is it the game’s fault or are you the one who sucks at this? Don’t get me wrong, nine times outta ten, it’s me, but I can’t help but wonder if that wall looks like a wall and now it’s miraculously not a wall. Having said that, I liked the way that Electronic Super Joy 2 looked. It has a chaotic tone to it that perfectly matches the game and the ideas behind it, so I was a huge fan.

I didn’t beat Electronic Super Joy 2. I hit a wall eventually and there I stay, trying desperately to intermix double jump and a sort of battle axe rushing attack to get through a truly difficult place. I’ll keep trying. I don’t know if I’ll ever beat this game. I’m worried I’ll send my Switch Lite sailing over the balcony before I get there. But then I remember. I think about that sexy, solid gold, wish-giving butt, and how mad the Devil is gonna be when I steal it. So I take a deep breath. I try to slow my heart. I take a gentle sip of water and close my eyes. When I open them, there the game is. And I shall try again. And again. And again.

I have never so enjoyed a game that makes me so angry in my life.