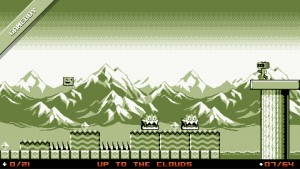 ‘Life of Pixel’ is a celebration of gaming throughout the ages. It’s been available on PC for a while and has just been released on  Wii U. You play as a single green pixel that is curious to learn about his origins. He travels to a video game museum where he is able to explore games from a large variety of 8/16bit home consoles and computers.

‘Life of Pixel’ is an extremely basic 2D platform game consisting of little more than running, jumping and double jumping. There are just over 100 short levels which take from around 30 seconds to a couple of minutes each to complete. Pixel has two points of health so he can take one hit from enemies per life, however most hazards such as spikes, fire and water are all single hit kills. As such, this is the sort of game where you are liable to die a lot. In that respect it’s similar to Super Meat Boy, only not quite so difficult.

There is very little variety to the actual gameplay. There are no bosses or ways to attack enemies. There are a few power ups that you can occasionally use and a few vehicles such as a skateboard and a jetpack. These help prevent the game from becoming too stagnant and assist you in uncovering hidden locations and secret objects.

As you begin the game you have the option of 8 retro consoles / computers to choose from. These include the Spectrum ZX81, Atari 2600, ZX Spectrum, BBC Micro, Amstrad CPC464, Commodore 64, Nintendo Game Boy and Nintendo Entertainment System. Each machine has 8 levels which are all presented in the graphical style of the machine in question and many of levels are inspired by some of the iconic titles available for said machine. Titles that have inspired stages within this game include Zelda, Sonic, Streets of Rage, Megaman, Castlevania, Wonder Boy, Turrican, Zool and James Pond to name a few. Although the stages are presented in the styles of other machines, the game itself plays in exactly the same way throughout.

Each level includes a quantity of gems and a locked exit door. In order to open the door you have to collect all of the gems. In addition to the gems, most of the levels include hidden items such as special gems, fruit and candy. These special items are normally hidden inside secret walls or are placed in hidden chambers which take a little more effort to locate. These hidden items are not essential for beating the game, however if you wish to unlock the extra stages and achieve the 100% Happy Ending you’ll have to locate all of them. The extra machines that you can unlock include the Super Nintendo Entertainment System, Commodore Amiga, Apple II, Sega Master System and Sega Mega Drive.

The effort that has gone into the graphics is incredible. For each machine the developers have paid very close attention to details such as colour pallets, technical limitations, resolutions and scrolling abilities. As such when you play each level it’s very easy to believe that you are playing ‘Life of Pixel’ on the original system that the level represents. The best example of this would be the ZX Spectrum which had an interesting issue with colour limitations that caused the sprites to be one solid colour against a solid background. In addition, these sprite colours would often bleed into the sprite’s surroundings, which is exactly what happens in the Spectrum levels. 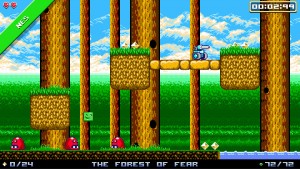 In addition to authentic looking retro graphics, you are also treated to some authentic chip tune music. It isn’t the best chip tune music around but it’s certainly pretty good and helps add to the illusion of playing classic console and computer games.

The game can be played using the Wii U gamepad but also supports the Pro Controller. You move Pixel around using either the D-Pad or left analogue stick, and you jump with the ‘A’ button. You can interact with other characters with ‘B’ for hints and tips, but I tended to ignore these as I found they slowed down the pace of the game and weren’t all that helpful.

The controls are very responsive for the most part however I did notice a few anomalies. For example if you press the button to double jump during elevation you get quite a big boost, however if you press it on the decent you just get a rather pathetic bounce. As a result I couldn’t wait until I was at my highest before doing the double jump because of the risk of leaving it a fraction of a second too late. Another problem revolved around jumping from moving ledges. If you jump up from a moving ledge you keep almost 100% of the ledge’s momentum until you press the D Pad where you lose it all completely. This made it tricky to land precisely when jumping form a moving ledge.

Overall this game isn’t too difficult. Although you are likely to die a lot (especially in the unlockable stages) you do have unlimited lives so as long as you are determined enough there is no reason why you couldn’t achieve 100%. There was one particular burning house stage in which I must have died over 100 times and took me over an hour to beat. This was excruciatingly painful, however aside from that I never found this game to be overly difficult.

If you just want to beat the regular stages then this game shouldn’t take you longer than a couple of hours. However, if you want to beat every stage and score 100% you’re probably looking at around four to six hours depending on skill. This game only has the one main mode and once you’ve scored 100% there isn’t much further to do other than replay previous levels for the fun of it or try to get a good time on the leader board.

I experienced no major problems with this game however I did encounter a few bits of poor level design. For example, there are a few places where you can get stuck and have to manually restart the stage from the pause menu in order to try again. There are sections where you can’t tell whether there’s another play screen beneath you or a bottomless pit because there is no way to distinguish between the two. Also on the levels that do not scroll it is very easy to walk straight into a roaming enemy, as you can’t tell what is in the next screen until you step into it. There are a few minor bugs like the ability to push moving ledges if you bump into the sides of them, but these are only nitpicks. I experienced no major glitches or crashes. 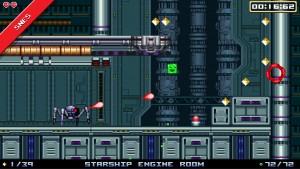 Overall ‘Life of Pixel’ is a valiant effort for a small indie company. Despite the simple gameplay, the novel graphic styles and various homages to classic games were enough to keep me interested until the end. It’s a great game for young people who are interested in the origins of video game technology or older players looking for some retro nostalgia.