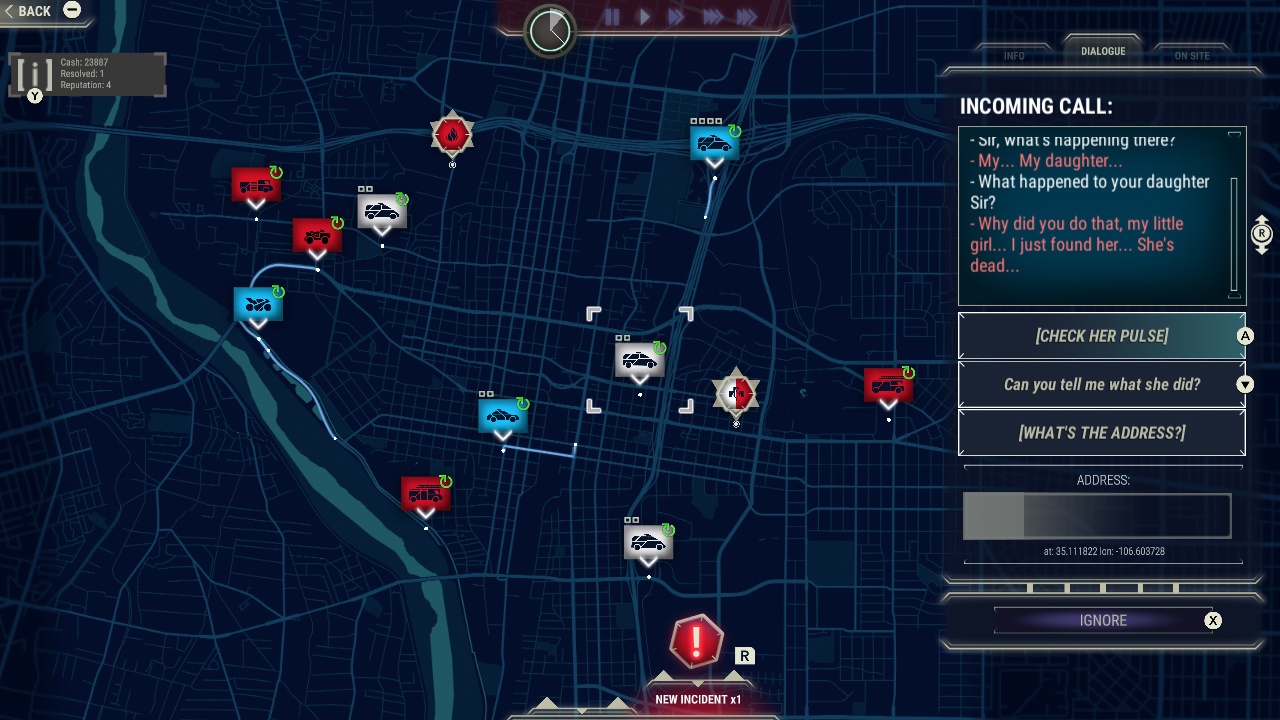 I would imagine that in at least one point in our lives, we have all had to call or been involved in an incident where the emergency services were needed. Whether it be an accident, fire or some form of criminal activity, we all feel safe in the knowledge that there is always someone at hand who can help us in whatever our emergency. Despite the relief of seeing and hearing the blues and two’s coming to our aid, there is always an unsung hero within the emergency services; namely, the telephone operators who become our first port of call and it’s this premise that surrounds SONKA’s 911 Operator as it dials a release onto the Nintendo Switch.

The game places you within the shoes, or sat upon the hot-seat, of one of the unsung heroes of the emergency services telephone operators. With a map of a world city displayed on a screen in front of you, it’s up to you to respond to incidents, take telephone calls and dispatch the necessary services to whatever emergency may arise. It sounds a simple premise on paper, but in reality there is a lot more involved than what you may initially think. Your first call of duty is to place your services around the city where you think they would best be positioned to respond to any call-out within any area of the city. Your basic set-up usually involves 2 or 3 police units, a couple of ambulances and some fire appliances.

As you watch the screen that shows the road map of your city and the position of your units, you wait for any kind of emergency situation to turn up. Some of these come in the form of an incident that may involve a traffic violation, stolen vehicle or fire that has broken out, although basically anything could happen at any time. Each incident is highlighted with a basic description and recommended service that needs to respond. You then need to position a cursor over what unit you wish to utilise and send them to the incident. Other cases can come in over the phone; an audible tone signalling its usage which you must acknowledge in order to take the call. 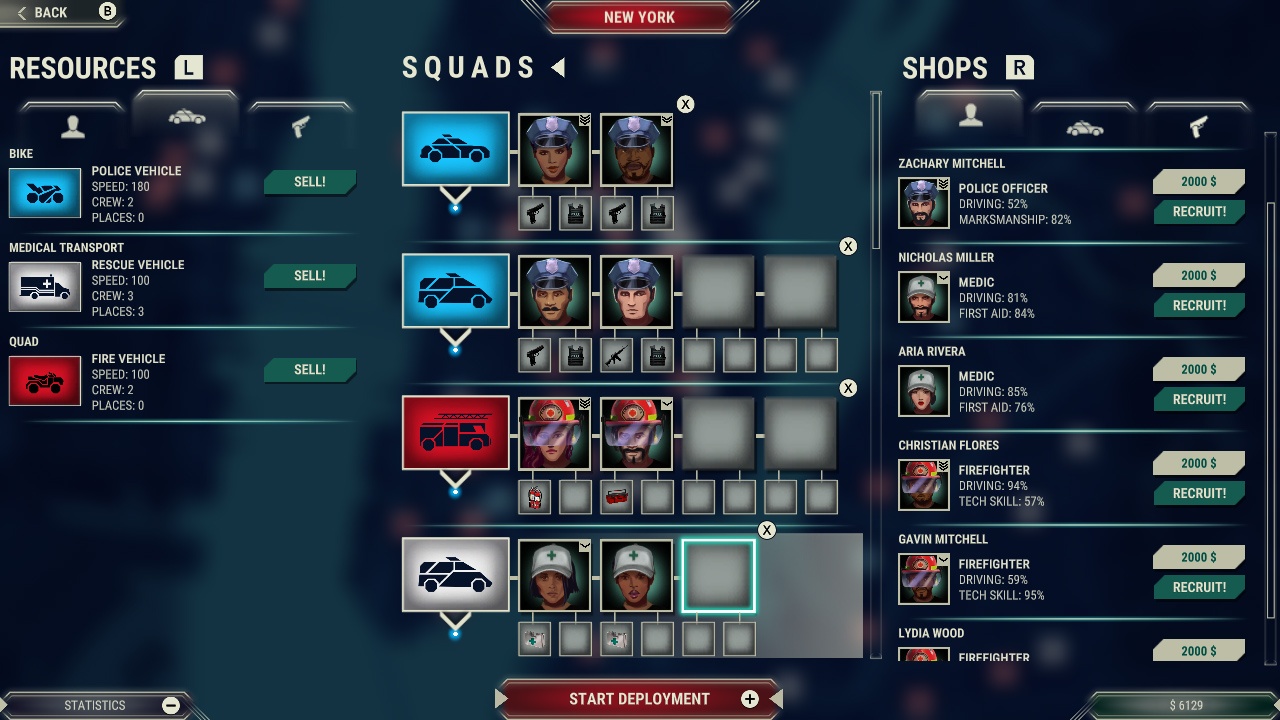 Using real-life recordings of actual emergency calls, you need to answer the phone and ascertain what the emergency is. It could be anything from a fire, medical situation or crime in progress. However, it is also your duty to try to gather as much information as possible about the emergency, or try to offer advice to the caller who may be involved in the incident themselves. There’s a lot of variety to the type of call-outs you may receive, including many that might not be what they initially seem. For instance, a noise complaint about a neighbours television set being too loud for too long, may actually turn out to be not just a police incident, but also a medical emergency as the source of the problem transpires to be an elderly resident who is need of assistance, or sadly passed away days prior to the event.

It’s this style of call that requires you to be as accurate as possible with whom you send to deal with the emergency. Send an ambulance crew into a hostile situation without police backup, then they stand the chance of being injured or killed within the line of duty. It creates a style of play that forces you to prioritize what call-outs require the fastest response or what units are required to get the job done. It isn’t long before the whole city feels like a drunken Saturday night, as you can easily become overwhelmed with the number of calls and incidents in relation to the number of units that are available to you. Sifting through what job is important, what emergency can wait for a free unit or dealing with prank or hoax calls soon becomes a normal day in your working life. As you work through a series of shifts, you must make it to the end of your working time with enough positives and responses to warrant a successful period of being an operator.

Once you complete a shift, you are then given a brief on your performance and what funds have been awarded to your department. With these monetary values, you can upgrade existing units, buy new ones and hire new staff. With these upgraded facilities or units, you can become more efficient within future shifts by having more units to respond with or better prepared units for what eventualities they may face. It adds a sort of RPG element to the gameplay with a scale of depth that delves into a variety of vehicles or apparatus so that you can be prepared to take on any emergency. This becomes an important element within the game, as it can throw all manner of disasters at you, including a city stricken with the aftermath of a powerful earthquake. 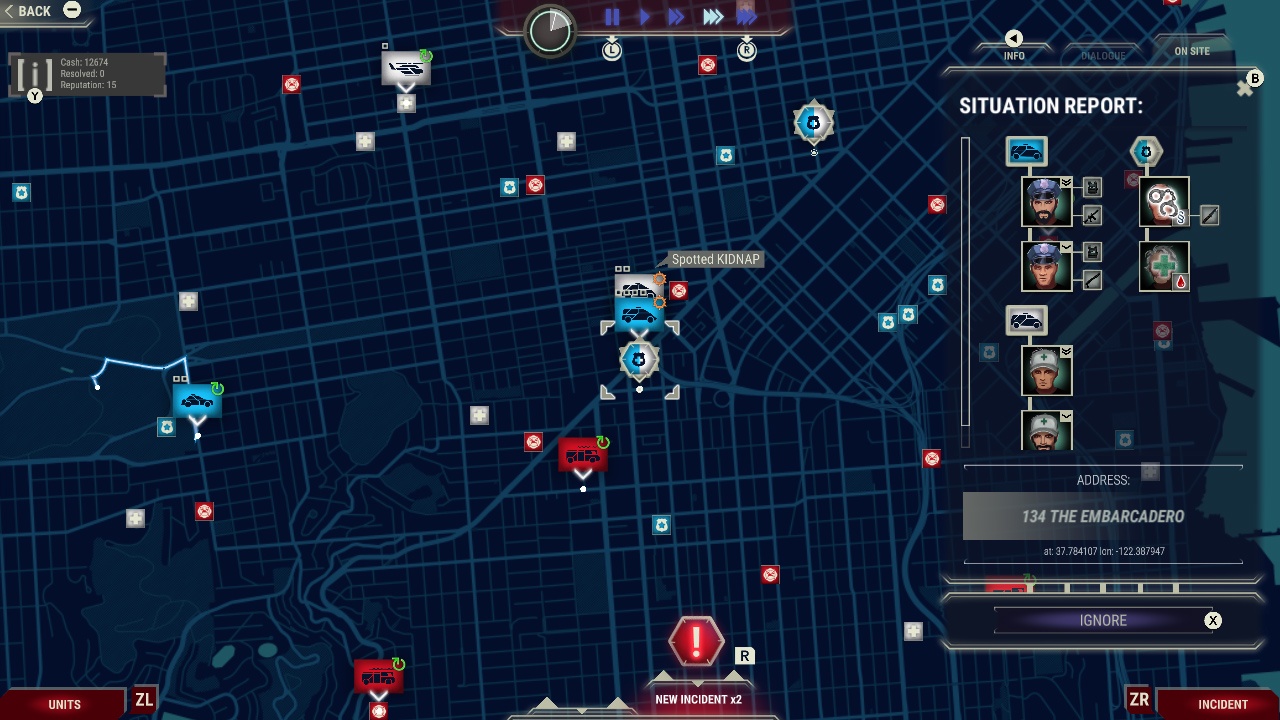 The game comes with a variety of different modes that offers a wealth of cities and situations. The career mode takes place over six cities, each one containing unique events that test your skills to the max; such as the previously mentioned earthquake in San Francisco or a series of bomb scares in New York. It is here that the need to upgrade your units becomes paramount, even to the point of utilising helicopters for quick response or quad bikes to reach difficult areas. However, fail at your task by missing or failing too many emergencies or by taking too many casualties, then your employment is terminated.

Free play gives you the option to pay within over 900 cities from all over the world. This Switch exclusive is a nice feature within the game, allowing you to be an operator within the city where you live, or one that is nearby. Whatever city you choose to play on, its demographics all contain real streets and addresses, adding to the immersion of playing within a familiar setting. However, wherever you choose to set your game, the main core of the gameplay remains the same; especially with its original American settings still being prevalent in the United Kingdom. As well as this, although the game contains over 140 different types of emergency situation, its random element of call-outs can produce some cases of repetition, with several situations bearing the same mechanics within them; such as the same person found collapsed or a crime being committed by the same offender.

Overall though, 911 Operator offers quite a unique experience in terms of the content of a video game. It’s an interesting and entertaining premise; one that offers a decent challenge, but ultimately, also has a rewarding element in its RPG style of levelling. Whether you play in the Switch’s handheld mode or docked, the cursor controls with the use of the Joy-cons or pro controller offers a satisfying and relatively accurate scheme; although the lack of touchscreen support is a missed opportunity here. Although the game remains largely the same despite what mode you are playing, it’s expansive library of worldwide cities does provide a form of variation; especially with its ability to play within your home, or a neighbouring city. It gives a good insight to the jobs of the unsung and unseen heroes of the emergency services and if it’s a career that’s ever interested you, then this is a good simulation to test whether you’ve got the nerve to take on such a huge responsibility. Whatever your emergency, this is a game that is sure to come to your aid.

911, what’s your emergency? Oh hi, I can’t seem to stop playing this game.