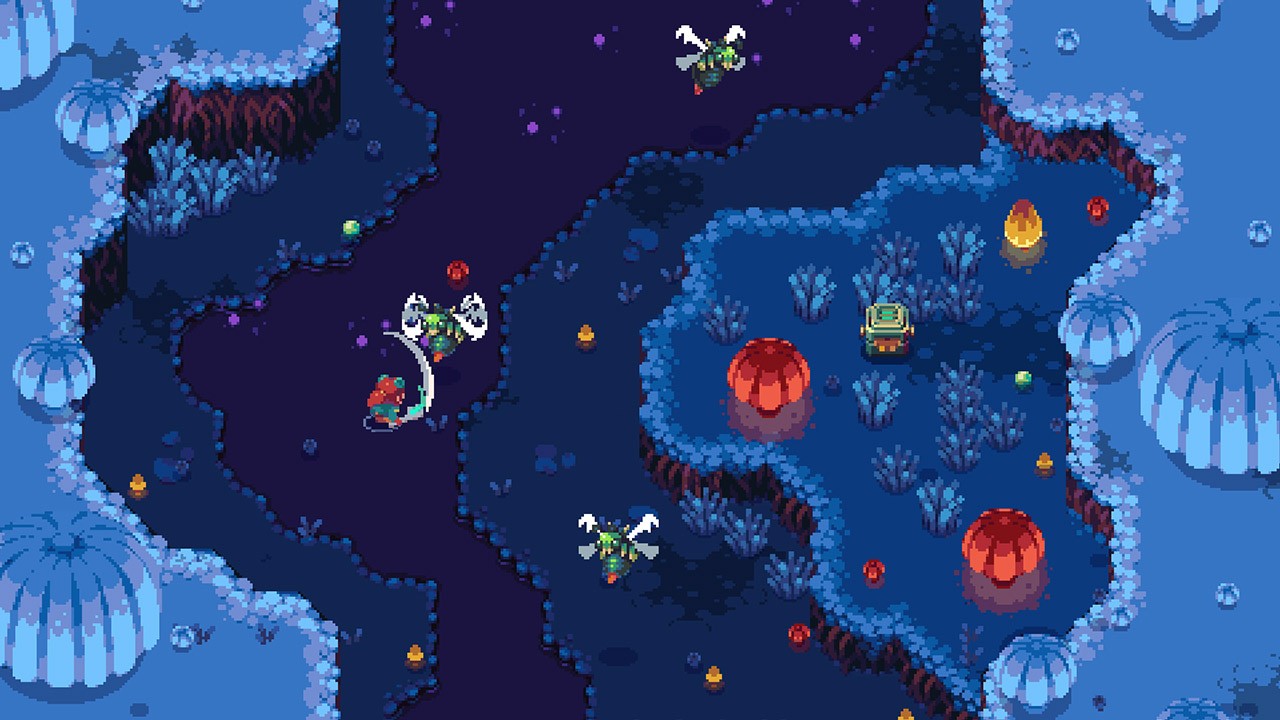 Retro is a funny old thing. You look back at the things that were once in fashion or create memories of activities that may have helped shape your life as you grew up. Of course, it’s something that only becomes relevant the older you get. Sometimes, these retro items come back into fashion, like lava lamps or deeley boppers; albeit more often than not, for only a short time because the rose tinted glasses with which we view the past can blur our focus. However, sometimes the things from our past never go out of fashion, or grow old because they hold such value, that they’re simply treasures. For example, within video gaming, the Legend of Zelda series of games will always hold something special; even spawning enhanced editions such as Link’s Awakening. Its style often inspires modern titles, such as Sparklite as it sparks a release onto the Nintendo Switch.

If you love everything retro, then you’ll simply love the values that Sparklite holds close to its heart. It brings a lovely aesthetic with pixel graphics, yet given a modernisation with a smoothness to detail and best of all, plays as a homage to the Zelda games of old. Developed by RedBlue Games, with publishing through Merge Games, Sparklite takes you on an adventure as you play the role Ada, a young girl whose airship becomes damaged in a storm and crashes within the land of Geodia. However, all is not well within the lands, as an evil Baron has made the earth unstable with his constant mining of resources. In order to repair your ship and find a way home, you must help the inhabitants of Geodia build their lives again and thwart the evil plans of the disastrous Baron.

With the land constantly shifting due to the constant earthquakes that the mining produces, the residents of Geodia have taken to the skies and built a city that floats an island on balloons. Your task is to venture down to the surface and explore a number of regions, from the lush greenery of the Vinelands to the stench of the Acid Bogs or snow-filled tundras and scorching deserts. Within each of these biomes, you search out for the entrance to the mines where one the Baron’s henchmen, a titan, awaits your arrival. In order to progress from one biome to another, you must defeat the titan and free the area from tyranny. However, there are also a number of factors that make up your quest, from rebuilding the city, collecting resources and developing a host of weapons and abilities to help you on your way. 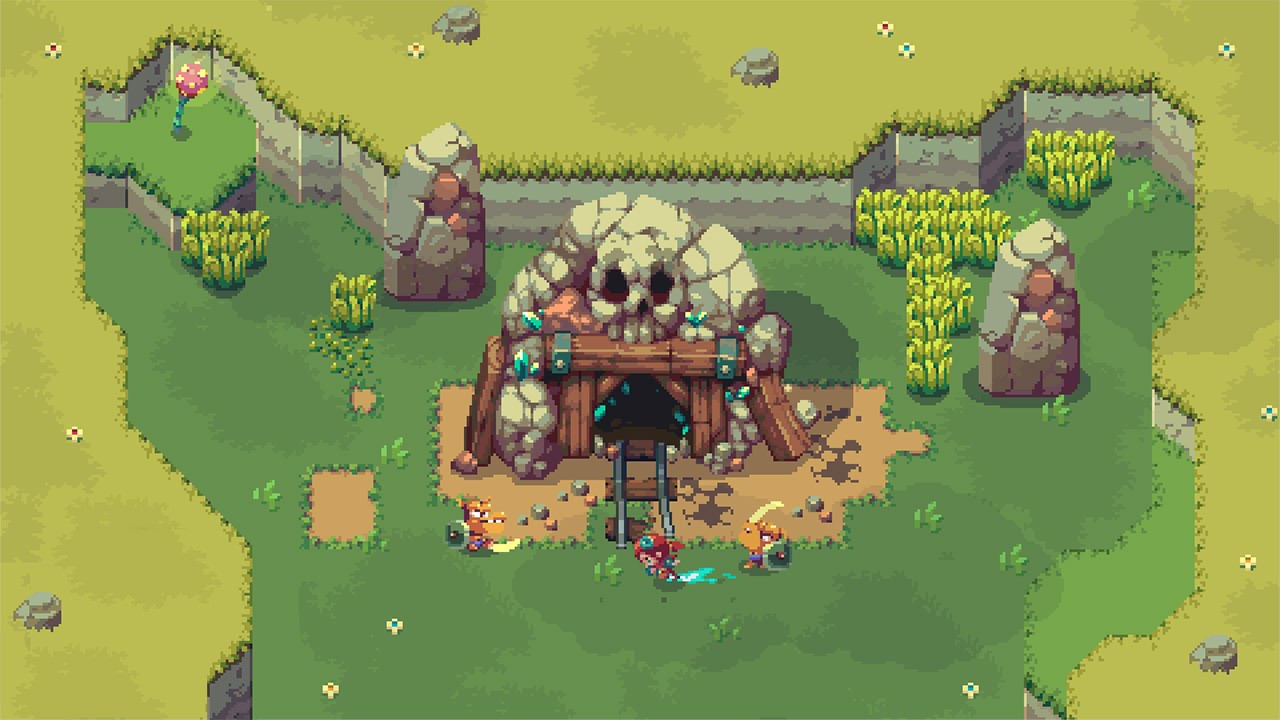 The game plays in a loop, with you helping the people within the floating city and going down to the surface. However, with an element of roguelite thrown into the gameplay, each trip down to the surface reveals a new layout of the land, even if you’ve visited the area before. This adds a freshness to the game, as each visit to the surface is never the same, although the area never changes. Think of it as one of those sliding puzzles where you move the squares around a grid to form a picture. The layout of the land incorporates the same features, shifting its grids to form new lands. Being a roguelite, your main aim here is to collect resources, complete tasks, find lost townsfolk and eventually enter the mines.

As you explore each region, you fight a number of enemies, collect sparklite, a natural resource and a form of income with which to purchase upgrades and work towards a series of mission objectives. With the resources you accrue, you can then develop the city that floats above the clouds by opening and developing a series of shops that can outfit you with abilities to make your next venture down to the surface more successful. This becomes a vital element within the gameplay in order to better equip yourself to be able to take on the mighty titans that reside within the mines. This is done by equipping patches, which are bolt-ons that can grant you extra health, armour or boost the damage output of your handy wrench, or weapon.

The more you develop the city, the stronger you become. Through sparklite resourcing and development, you can acquire more powerful patches, workbenches to upgrade gadgets and research enemies. The more you explore, the more you discover, eventually finding ancient gadgets that reside within mines or tombs. These sections play out in a similar fashion the dungeon’s of Zelda; often requiring you use specific skill sets and techniques to traverse them, but then rewarding you with helpful gadgetry. Items such as the Spark Slinger can activate out-of-reach switches or unlock chests, while the Spark Blitzer gives you the ability to attack enemies from afar. 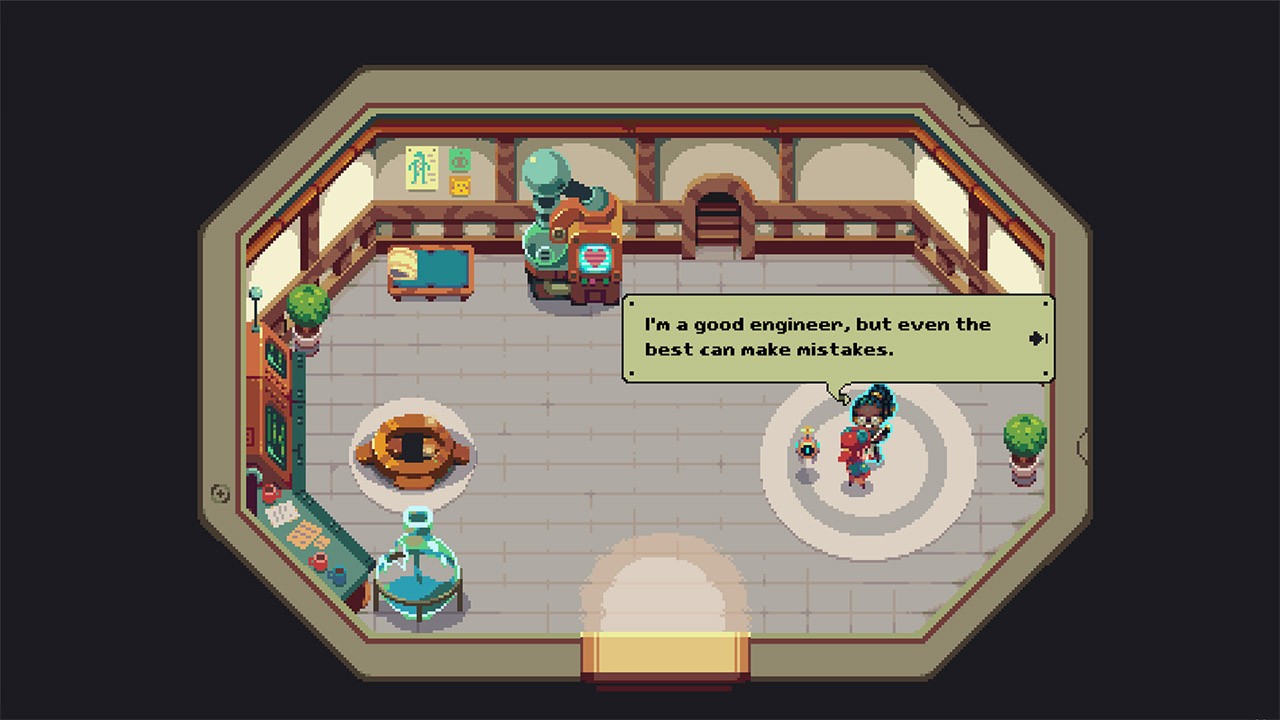 It all adds to produce a compelling game that rewards you the more you play. It holds that addictiveness of just one-more-go and holds the same level of charm as the classic Zelda’s of yesteryear. Its roguelite elements have been superbly implemented here and are never frustrating; something that many roguelites can suffer from. It also presents a nice challenge, but one that is never unfair; should you come across a powerful foe, then you simply know that you need to invest more in order to reach a level that can beat him. It’s like a grind, but without the grinding. Although primarily a single-player game, once you defeat the first boss, or titan, the game also opens up to incorporate a local co-op element so that you can bring a friend along for the ride too.

Although it holds many inspirations, Sparklite is a game that is capable of standing firmly on its own. It looks fantastic with a retro style, yet one that holds a touch of modernity with a smoothness of detail. Its audio qualities are also top-notch with some catchy tunes to hum along to and add a touch of personality to the regions or environments you find yourself in. Its biggest draw though, comes in its tightness of control that offers superb accuracy in all of its mechanics from movement, boost jumping and combat. Everything here just feels right and throughout the game, you can’t help but feel the love, time and effort that the developers have put into their creation.

Overall, Sparklite is just simply a joy to play. All of its elements combine to produce an instantly playable game that oozes charm from all angles. Its ever-changing landscapes keep things fresh and its constant exploration and upgrading gives the player something really genuine to work towards; the rewards for which are instantly noticeable, especially when you defeat a particularly nasty titan and progress to the next areas. If you love the Zelda games of old, then you’ll simply fall for the charms of this game and if you’re looking for a new land to explore, then Geodia will offer you all that and more, eventually leading you down a path that you’ll never want to end.

Sparklite follows in the shoes of the classic Zelda’s of yesteryear, yet holds enough charm to make this a game that stands very tall on its own.