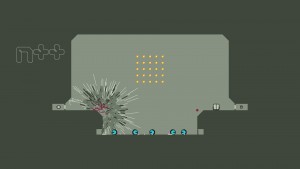 N++ is an exemplary video game, one with an embarrassment of content, slick visuals, and above all else, tight, precise gameplay and consistently impressive level design (especially impressive when you consider that the game has over 1000 stages). For all intents and purposes, I should love this game……but I don’t. Don’t get me wrong, I like this game a bunch, but there is something about it that always keeps me at arm’s length, like a totally awesome girlfriend with commitment issues or an extra finger on her right hand. I felt the same way about its predecessors and despite wanting to love it, I ultimately feel the same way about N++……I really like you as a friend, but I think we should see other people.

I think the problem is character…..it doesn’t really have any. Many will love its modern minimalist design – I certainly don’t dislike it – it’s just that, despite some nice little touches, it all feels a little too sterile. It’s fine for a while, but after 100 plus stages and what felt like a million plus retries, that cold aesthetic really started to take its toll. It’s the ultimate difference between this, and say, Super Meat Boy (now that’s a game that I love). On a mechanical level they’re incredibly similar (you jump, you avoid obstacles, you die a lot), but the character design, the amusing deaths and heck, even the brief but entertaining story, it all combines to give the game that little bit of heart; some fun to go with all that death and frustration. It might sound unnecessary for a game that is all about simple, perfectly formed mechanics, but N++ could really do with a little bit of warmth.

That’s a very personal opinion of course. Many gamers won’t give a monkey’s about the lack of story or humour, all they will care about is the gameplay, and as anyone who played N or N+ in the past might expect, it remains largely exemplary here. Rather unsurprisingly, it also remains all but unchanged. The physics might be the tiniest bit heavier this time around, but this physics-based platformer will feel immediately familiar to fans of the previous titles in the series. The big difference here is the sheer amount of content. With over 1000 levels and more being added all the time via user-created content, there are enough rage-inducing stages here to keep masochistic gamers busy for quite some time to come. What’s most impressive however isn’t that there are so many stages, but that the level of quality remains so consistently high throughout. Some stages are inevitably more memorable than others, but for the most part, nearly all are well crafted murder boxes eager to test your skill and patience. 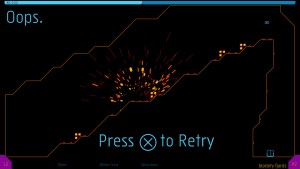 Dying will inevitably come often; be it an awkward landing, a rocket, a mine or some douchebag robot, everything in this game is out to kill you, and kill you they will. They won’t stop you though – not initially anyway. The entertaining and rather dramatic death animations of your little stick ninja are quickly followed by an immediate retry….and then another…..and then another. For the longest time, I found it hard to pull myself away. The question is, will you go back for another round a week later? How about a month later? I’ll certainly dip a toe every so often, but I can’t see N++ becoming the obsession that it so clearly wants to be. When you do start playing, it’s incredibly hard to put down, I just found it a little too easy not to start playing it in the first place.

That all changes when you get a few friends involved though – I can see this remaining a very solid party game for years to come. It doesn’t quite match the multiplayer brilliance of the best that the Wii U has to offer, but outside of Rocket League, this is one of the better multiplayer games on the PS4 platform. It doesn’t have any online play of any kind, but honestly, this feels like the kind of game that is best suited to couch-based multiplayer mayhem.

With both co-op and competitive options, N++ doesn’t skimp on the multiplayer content. Co-op in particular almost feels like its own game; the single screen stages look the same as always, but these levels are created solely for co-op play with all players involved needing to work together for any chance of success. These levels, while an absolute riot, work as well as they do because they force you to work as a team and are not reliant on a follow the leader mentality that could have become tiresome down the line. The competitive races are inevitably more simplistic affairs, but again, with a few friends and beers in tow, it could be argued that this is where N++ is at its very best; when you and your friends add the warmth and character that the game itself fails to supply itself. 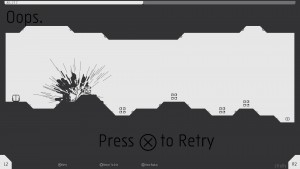 It you can get past the cold aesthetic and general lack of character, you will be treated to one of the most addictive and content rich platformers to grace, well, any console…..ever. With a huge amount of both single and multiplayer content, there is enough here to keep those looking for a genuine challenge busy for months on end. This type of game obviously won’t be for everyone, but if you’re interested in testing your gaming abilities, there are few better places to do it than right here. Death is never far away in N++, but then, neither is the restart button.