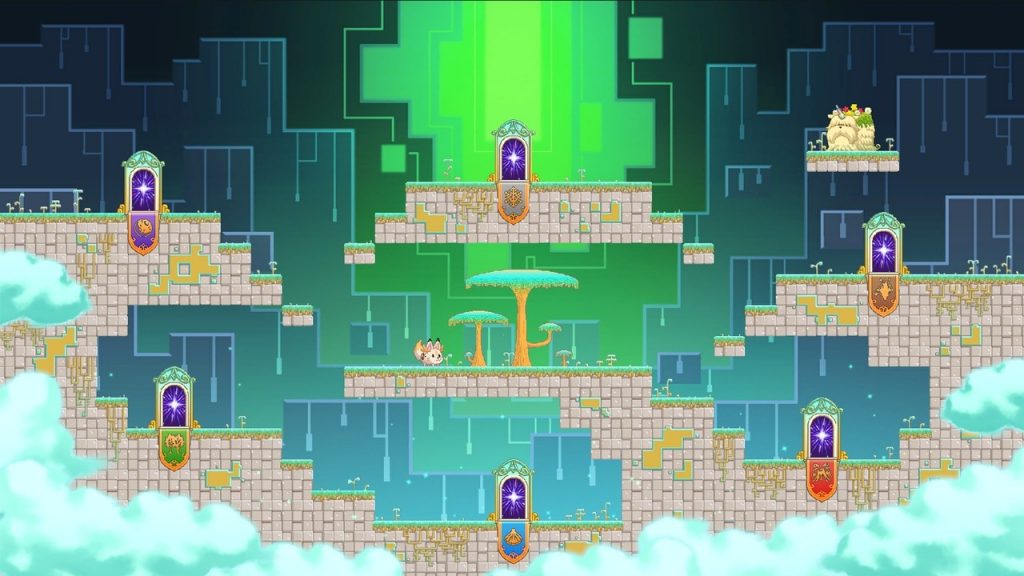 You usually don’t get sequels 6 or so months after the original has been released but that is the case with Dreamals: Dream Quest which is the sequel to Dreamals. Carrying on the with the same premise of utilising the abilities of 3 animals to help you progress through various stages, this time Dreamals: Dream Quest uses a desert fox, toucan and stag to replace the previously playable parrot, goat and raccoon. Dreamals was an interesting title that managed to combine cuteness with an ever-increasing difficulty level, it’ll be interesting to find whether Dreamals: Dream Quest is a rehash or adds something new to the series.

Just like Dreamals your animals have a limited moveset; Toucan only jumps, Stag slides to the left and Desert Fox luckily moves to the right. The idea behind your characters is that you must combine them so you can collect items and move onto the next level. To combine animals you simply have to get them to touch each other, when they do they morph into a new animal which keeps the moveset of the combined animals. For example, move the Stag into the Toucan and the new animal is able to move left and jump, combine all three animals and you’re able to move left, right and jump which is something you will need to do a lot. These hybrid animals can also be split back into their original forms, in the original Dreamals this wasn’t the case. 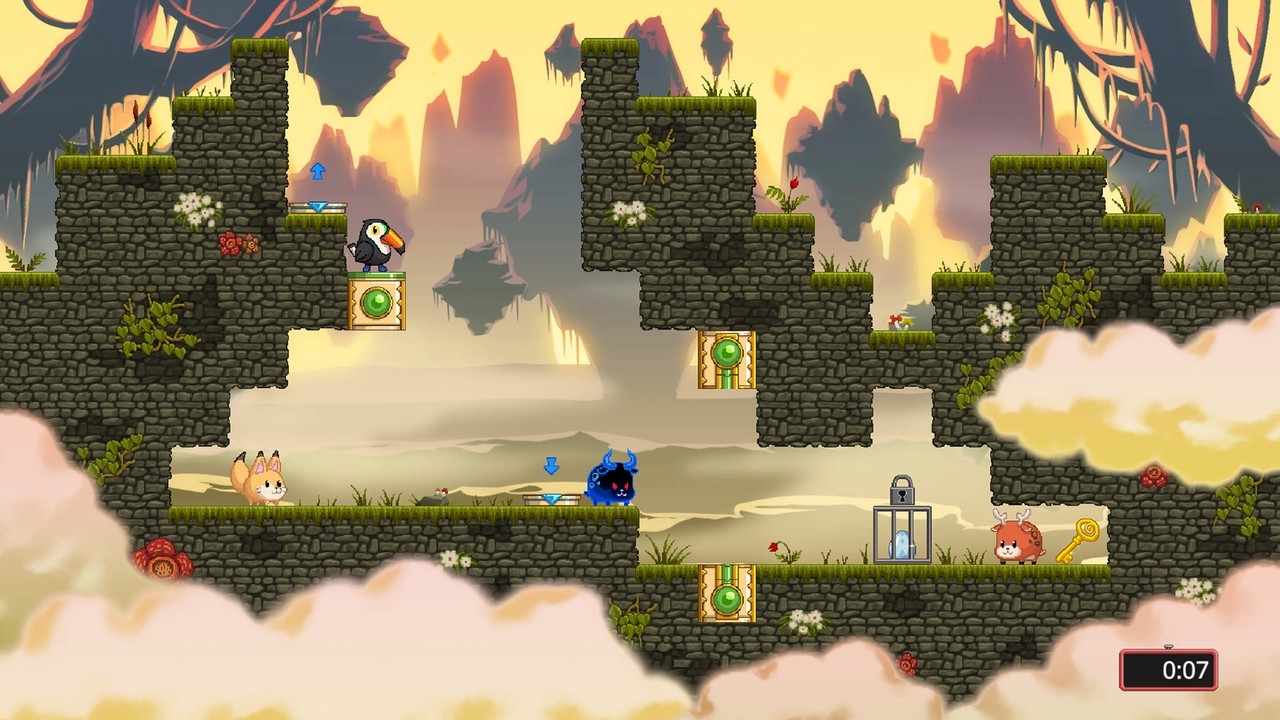 There is a story behind Dreamals: Dream Quest whereby each animal has fallen unconscious and are now in Dreamland where a mystical rabbit tells them that they will heal them if someone fixes his spaceship.

Dreamals: Dream Quest is a platform puzzler where one of your animals or hybrids must find a key which then opens a portal which takes you to the next level. Dreamals: Dream Quest is not an easy game, even the tutorials can become frustrating very quickly. The difficulty level increases even more because of the animals very limited areas of movement. There are many levels which can be lost within seconds so you’ll be restarting a lot, this is definitely one for the patient player. The new ability to split the animals is a welcome one but has some issues when trying to split them near an obstacle such as a wall. Another issue was not knowing where a portal would appear after you pick up a key. So there are times when you will have to guess where the portal will appear, which is very annoying when you’ve spent twenty minutes carefully combining your animals to collect the key only to find none of your characters are near where the portal appears or even worse the portal appears to the left of the character who can only move right! 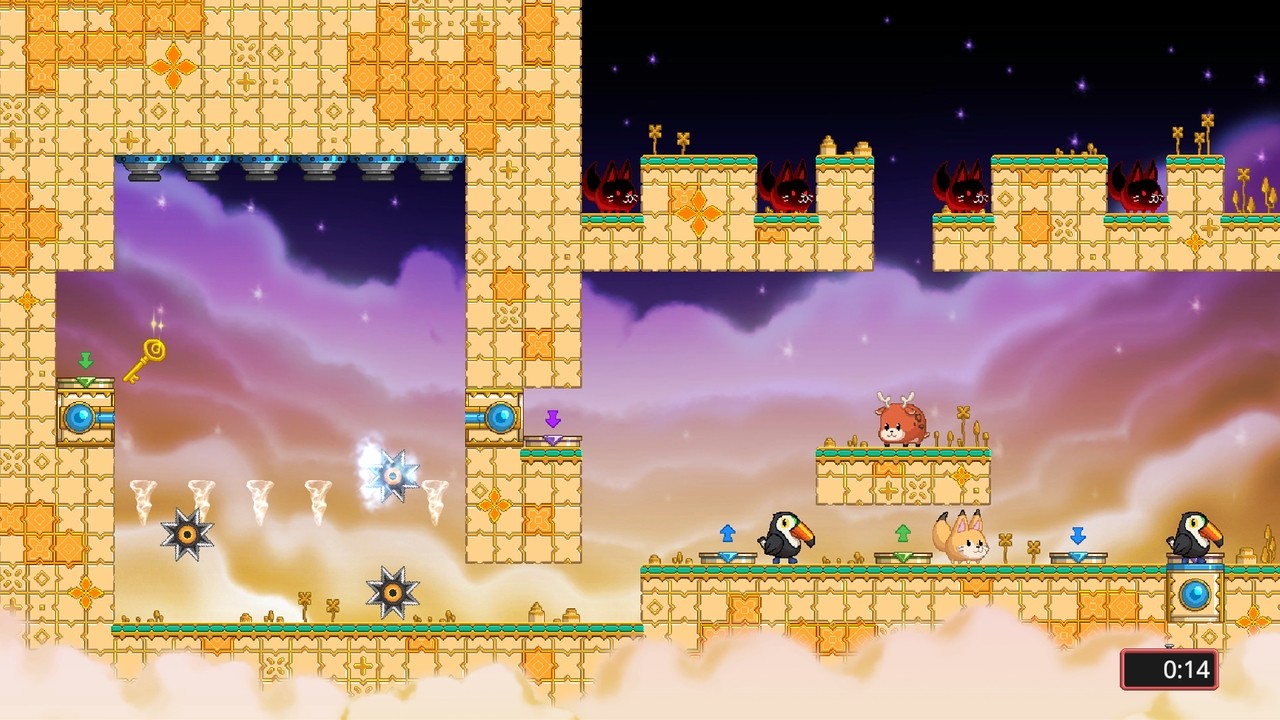 There are over 100 or so stages to get through split over a series of different worlds that may look different but follow the same cute design. The story is held together via a set of stills, the plot isn’t particularly interesting it’s only there to add a little more engagement to the proceedings but this isn’t really needed. Dreamals: Dream Quest is a graphically simple title and sound wise it’s fairly basic. The puzzling element makes Dreamals: Dream Quest a time-consuming difficult game to play, but once you know how to beat a level you’ll realise most of the stages can be completed within a minute which you’ll need to do to score 5 stars for that level (the more stars you collect then the more stages you have access to).

Dreamals: Dream Quest is a difficult game hidden behind cute basic graphics. If you enjoyed Dreamals then you’ll also enjoy this although this would make you someone who enjoys being frustrated a lot. It isn’t necessarily a better game than Dreamals but more a continuation of the same game. Dreamals: Dream Quest is not a title that welcomes the new player and whilst the game mechanics are very limited the satisfaction gained from completing a level should never be underestimated. Dreamals: Dream Quest may not play like a dream but it certainly makes you think.