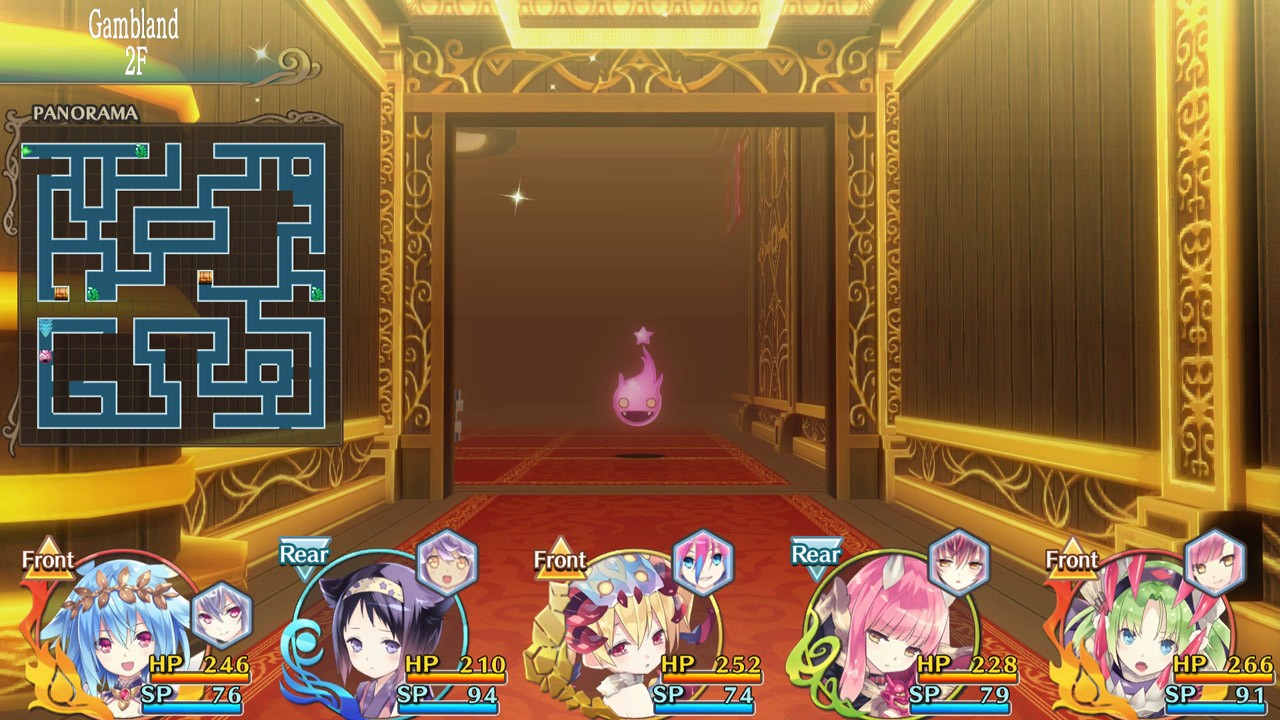 Ladies and gentlemen, people of all ages (hopefully at least above the age of 16), this is what should be, but probably won’t be, the final layer in a disbelief sandwich. There’s so much to examine here, and I’m honestly as shocked as you all are that this isn’t even remotely the first time I’ve seen it. It all began with a game called Moero Chronicles, which I reviewed on Steam more than three years ago. That already really raised some eyebrows and flags, and I was honestly astonished that a game like this could be created by Compile Heart and Idea Factory. It’s a dungeon crawler where monster girls have gone insane and hate humans, and the only way you can help them is to strategically destroy their clothing and then grope them when a seal with too much testosterone begins to ejaculate coins. Not a single word of that is false, and all of that will get you sent to jail when said outside the context of this game. The fact that it was not only created, but actually localized outside Japan should have been the end of it. But no, that was only the beginning. Two short years later, an updated version entitled Moero Chronicles Hyper was revealed, and it was on the freaking Nintendo Switch. I bravely ventured forth to find the story unchanged, the graphics upgraded, my Switch rumbling in an unpleasant fashion and a game that I simply could not play in public in any capacity, despite physically being able to. It was fantastic, yet I couldn’t silence the voice in the back of my head: is this seriously still a thing?

Now, the journey has been going on for three years, in which I’ve seen all manner of titles on the Switch, some actually more unabashedly lewd and confusingly proportioned than Moero Chronicles, but you never really forget where you’ve been when the landmarks were shocking enough. Yet here we are, with an honest-to-goodness sequel by the name of Moero Crystal H. If you’re a longtime Vita fan, you’ll know this title from its release a few years back, but this is the first time Nintendo Switch users will have seen it. The same team is behind this game as the previous one, and the plot, if you can believe it, is even more ridiculous. You play Zenox, a dude from the countryside who is following his father’s advice (even though his father has mysteriously disappeared) and is setting out to find his fortune in the world. His very first stop is an unassuming city where a massive temple exists, and, unbeknownst to Zenox, is the crux of balance in this world of humans and monster girls. This temple is the residence of the two Undergarments of Balance: the Bra of Darkness and the Panties of Light. Which, again, who is coordinating these outfits? As you visit the temple, the Bra of Darkness is stolen by an “unseen villain,” but voiceover confirms that it’s actually Dark Otton, an evil version of the infamous pervert seal mascot of the series. Zenox is apprehended by Luanna, the monster girl temple guardian, and informs him that the world is now going to end. Thankfully, the not-evil Otton is hanging about and gets his flippers on the Light Panties, which helps to prevent the world from immediately ending. It becomes clear that the Panties and Bra need to be reunited, and so Luanna and Zenox head out with Otton in tow (who insists on keeping the Panties on his head) to explore the worlds and get the Bra of Darkness back. Oh, and any monster girl who comes into contact with the Bra of Darkness immediately becomes evil and hates humans, so here we go again. 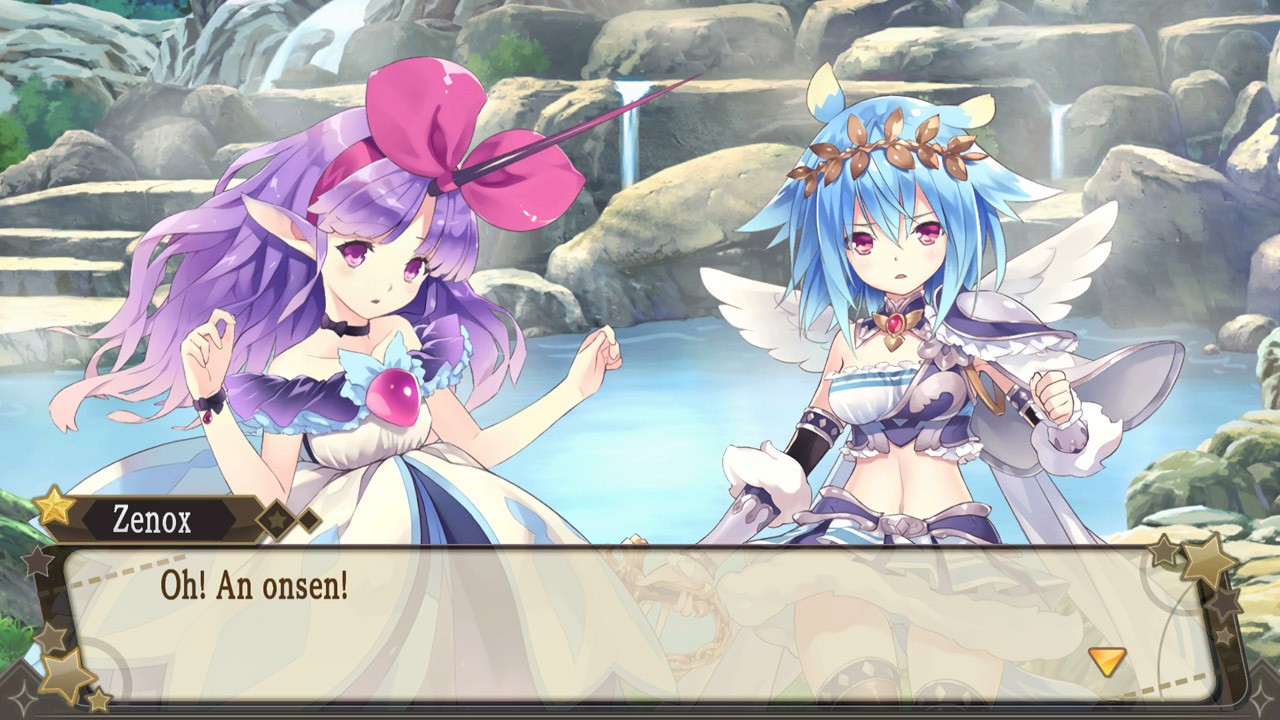 It seems silly to rehash things because so much of the core of Moero Crystal H is the same as Chronicles, but here we go. It’s an FP dungeon crawler, like Eye of the Beholder but with monster girls and super suggestive enemies everywhere. As you explore, you find treasure, trigger traps, have random encounters with random monsters and battle several monster girls, each of which has been possessed by the Bra of Darkness to attack you. Zenox can’t attack, but he can use items and charge up his desires to bestow his feelings upon a single party member, giving them a boost in battle, but if you overcharge your desire you end up exhausting yourself and can’t do anything for a turn. The monster girls use basic attacks and elemental skills, which work in terms of resistances and weaknesses like most fantasy games. You can beat the hell out of most of the possessed in a traditional sense if that’s how you wanna play, but Moero Crystal H has something else in mind. With targeting and patience, you can, instead, destroy most of the monster girls’ clothing, causing Otton to explode into paroxysms of ecstasy and joy. When this happens, you then enter a limited time mini game called Scratch Mode. You have thirty seconds to find the three sensitive points on a monster girl’s body and rub the hell out of it. Doing so in the allotted time activates Nude Flash, when you see the girls naked except for hearts over crucial bits, and then the curse is broken and the monster girl joins your party. If you don’t find the three spots in time, you still win the battle, but the monster girl runs away, still possessed by evil. If it’s a story centric monster girl, she just stays possessed and you need to keep rubbing her till you find the important spots.

In my humble opinion, it’s what the game does differently than the previous one that makes Moero Crystal H a more superior game than its predecessor. For one, the decisions that’ve been made within the design make it a more appealing game to behold. The general monsters, though still full of innuendo and sexual nature, are less graphic and on-the-nose than previous ones. Though mainstays like the Condomgolem and a UFO with breasts are still present, the design is less in-your-face, with several of the monsters being discreet in their lewdness and some even being cute. These make grinding through the random encounters easier and less bizarre. The monster girls, on the other hand, are leaning more into their sexuality, with a variety of poses when you encounter them and some having a good variety of “job panties” that allow them to change costumes (with stat changes to accompany the new outfit). If the whole game is basically for this to become sexy Pokemon, it makes sense to allow the player to enjoy interacting with the monster girls more both in battle and outside battle.

Additionally, some out-of-dungeon elements are more robust this time around. You can still give presents to the monster girls and rub them down to increase their affection (and thus increase effectiveness in battle), but there’s a lot more to the talks and the additional content. For example, taking the steps to improve the conditions of their rooms (they initially live in what looks like a ramshackled shack) greatly increases the amount of EXP you get, even with the monster girl isn’t battling. The other grand new addition is the Doki-Doki Shooter, where you blow up the girls’ clothing with bombs in a vertical shmup trying to find crystals hiding on their persons. Getting these crystals lets you access special dungeons inside the girls (their hearts, not the other one), and then doing strange, peeping-tom activities to see their inner thoughts (which look a lot like spying on people in their underwear). You can do a ton to progress the relationship with the monster girls who allow the Doki-Doki shooter to occur, so it’s worth taking a few minutes and navigating these mini dungeons in order to get some extra EXP and find out more about the girls. 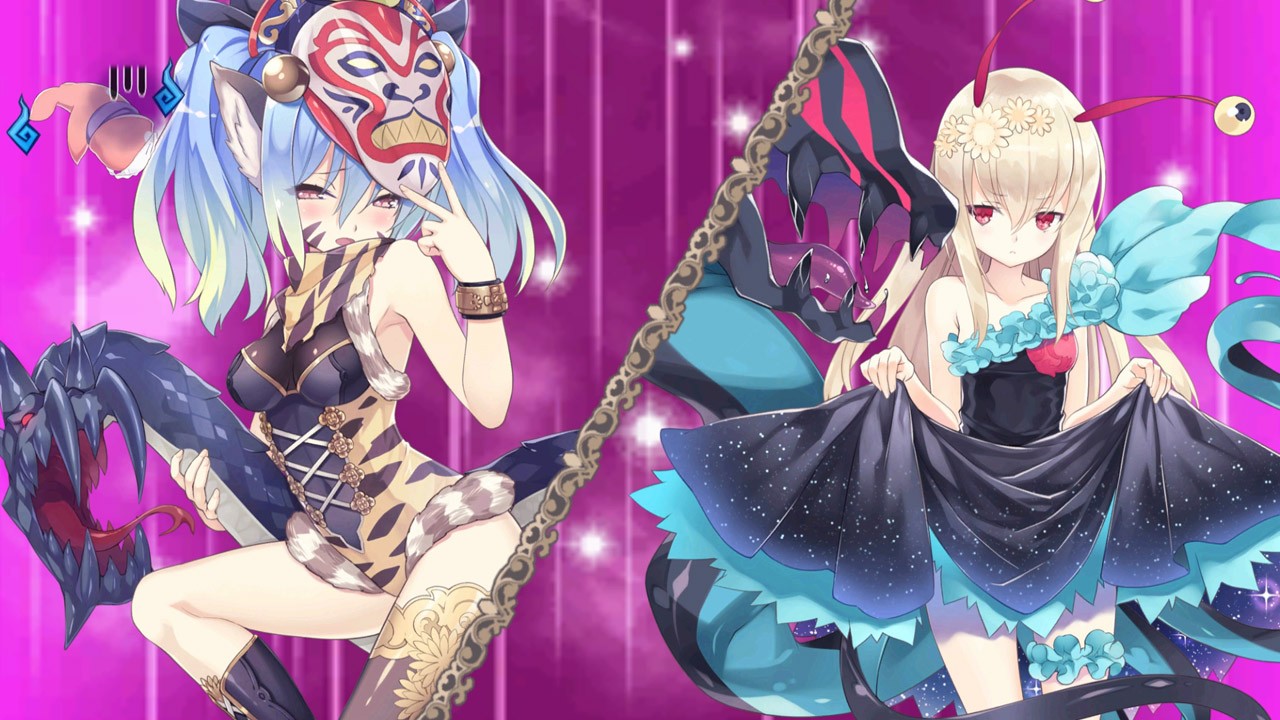 What’s most surprising out of everything is that Moero Crystal H runs FANTASTICALLY well on the Nintendo Switch. As much as I love Compile Hearts and Idea Factory, there’s always been the issue of optimization when it comes to bringing over games from their various franchises to the Switch. Here, Moero Crystal H runs buttery smooth, with zero issues moving between the combat, the dialogues and the different mini games present throughout. The install size is comparable at 4GB, but the performance is far better than anything else I’ve seen ported to the Switch from that next of the woods so far. As a result, you feel more inclined to explore the world and drink in the game, and also you’re better able to appreciate the always top notch voice acting and hilarious dialogues throughout. I cannot believe that visiting the onsen is now an ongoing action within the game (the onsens are secret shops you find in each dungeon) and onsen scenes between the girls are basically required reading. Everyone has a better sense of camaraderie, and there’s less awkwardness than there was with Io, as Xenox is trying to do more with his life than just be a simp for his monster girl best friend. Plus, there’s constant sexual energy in the air as every single monster girl seems obsessed with every single other monster girl and Xenox is just along for the ride.

With an on-the-fly shifting difficulty meter, it’s easy to explore Moero Crystal H and either focus on strategic elemental combat or just brute forcing your way through the game. There’s no penalty for taking the easy route, and there’s no greater feeling than busting through baddies on the highest level. Everything about this game is a great (but not exaggerated) step forward from the last, and I hope this means that Compile Heart will consider getting Genkai Tokki onto the Switch in the not so distant future. A final note, and a minor complaint: be sure to play this in handheld mode. All jokes about being ashamed to play this aside, it’s brutally hard to try to find and activate all three spots during the Scratch Mode in 30 seconds using the double joystick approach. Tapping wildly on the screen is far more effective and gets the job done right. You’ve been advised: now do what you will with the information.