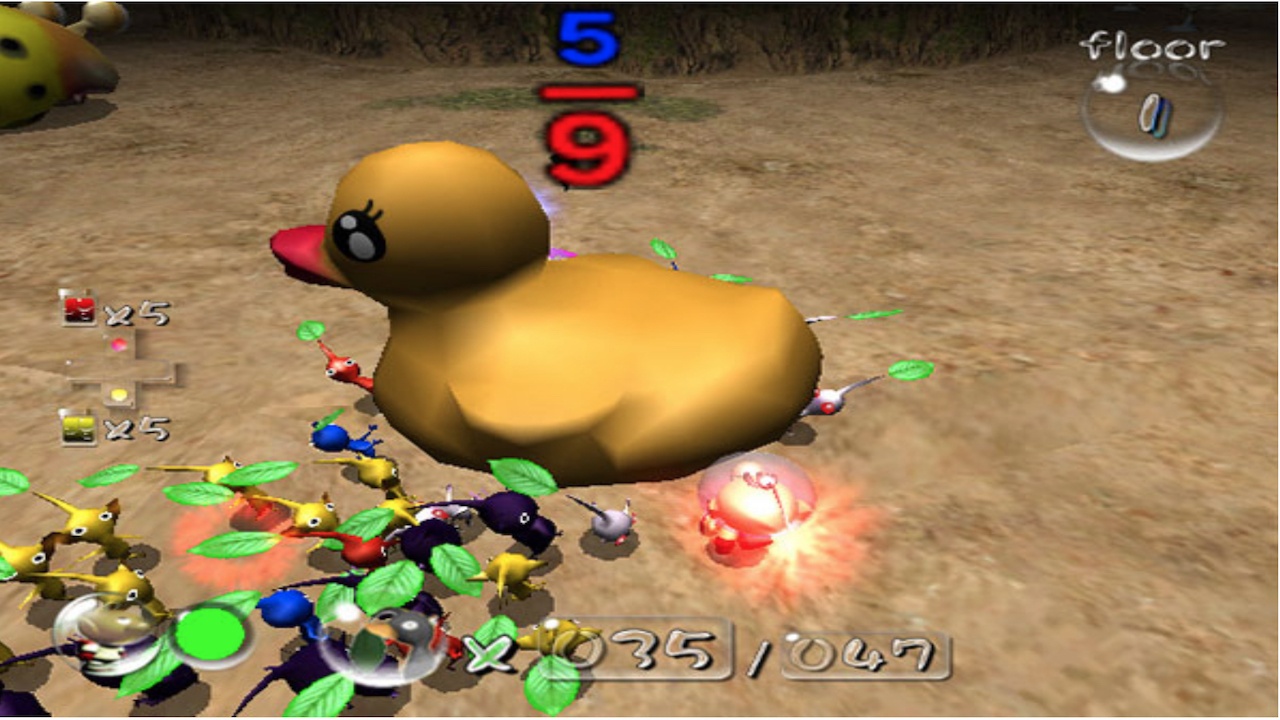 Being a re-release of a Wii game, which in turn was a re-release of a GameCube game, Pikmin 2 has been around for quite a while. Having said that, it’s hard to kill a good’un, and as far as cutesy strategy games go, Pikmin 2 is pretty high up there. This unanticipated but welcome addition to the Wii U Virtual Console is basically the Wii “New Play Control” version and thus requires a Wii Remote in order to play.

Picking up where the last game ended, Olimar finally finds his way back to his home planet of Hocotate. He works for the Hocotate Freight Company, which apparently has just suffered a crippling financial blow. Upon his return, Olimar finds the president of the company on the verge of hysterics. The ‘prez’ explains that an inexperienced company employee called Louie was transporting a valuable shipment of Pikpik carrots and was attacked by a vicious space bunny that devoured the precious cargo. A result of this is, the prez had to take out a mind-numbing financial loan in order to save the Hocotate Freight Company from bankruptcy, and now he needs Olimar to somehow pay off the colossal debt of 10,000 pokos, before the loan sharks start sniffing around. 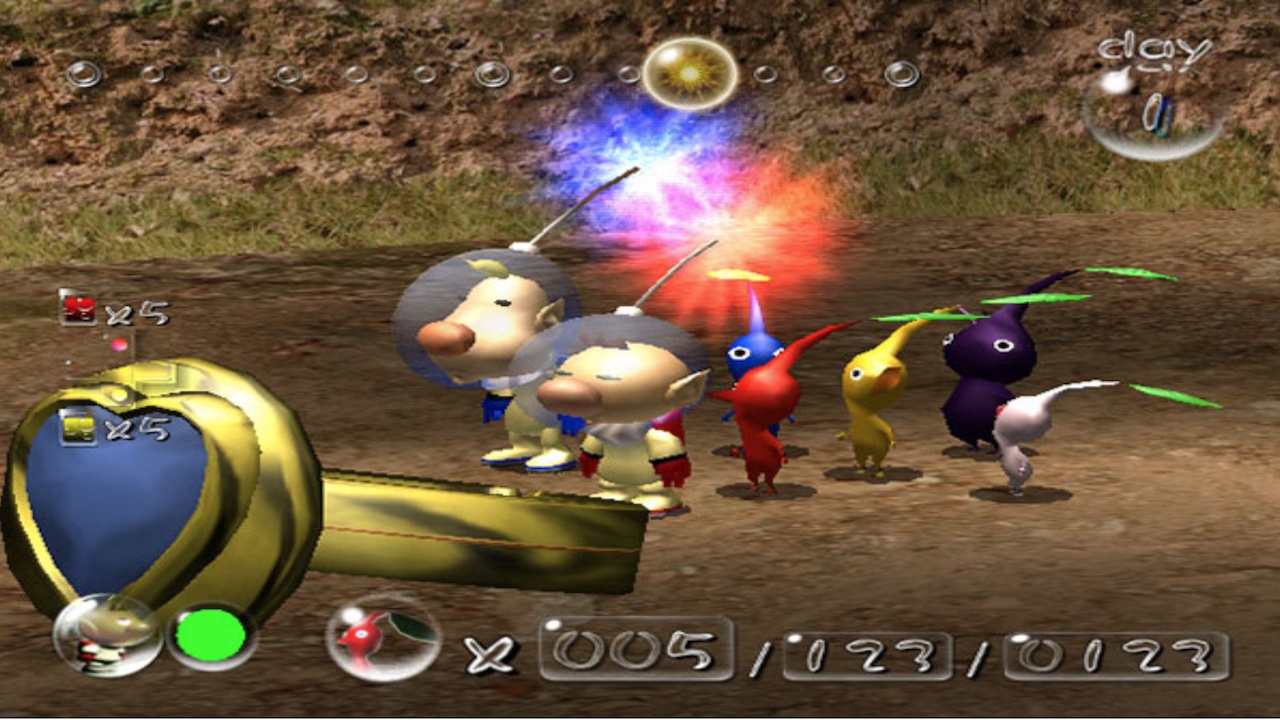 Those of you new to Pikmin 2, the premise of the game is to command an army of small plant-like creatures to carry out your orders. During his first adventure Olimar named the critters “Pikmin,” which now come in five different flavors. Wild Pikmin can also be found but for the most part, you’ll need to use Olimar and Louie to grow legions of these little guys from seeds.

It’s possible to command up to 100 Pikmin at any one time, although you can own hundreds more which can be stored in Olimar’s spaceship and the Onions.  During the game’s progression you’ll need to discover the yellow and blue Pikmin—who also have Onions—and the purple and white Pikmin who can only be found in the various “dungeon” crater levels, deep beneath the planet’s surface. Blue Pikmin are water dwellers and are the only ones that won’t drown in liquid, whereas the yellow Pikmin are lighter in weight and are resistant to electricity. The purple guys are akin to sumo wrestlers and have the physical weight and strength that is tenfold of the other Pikmin, along with the ability to stun and daze enemies when thrown. Finally, the white Pikmin are immune to poison clouds and gases and are extremely fast on their feet. If an enemy chows down on a whitey it’ll become poisoned, and therefore it’s a tactical quandary to sacrifice a single Pikmin for the good of the battle. 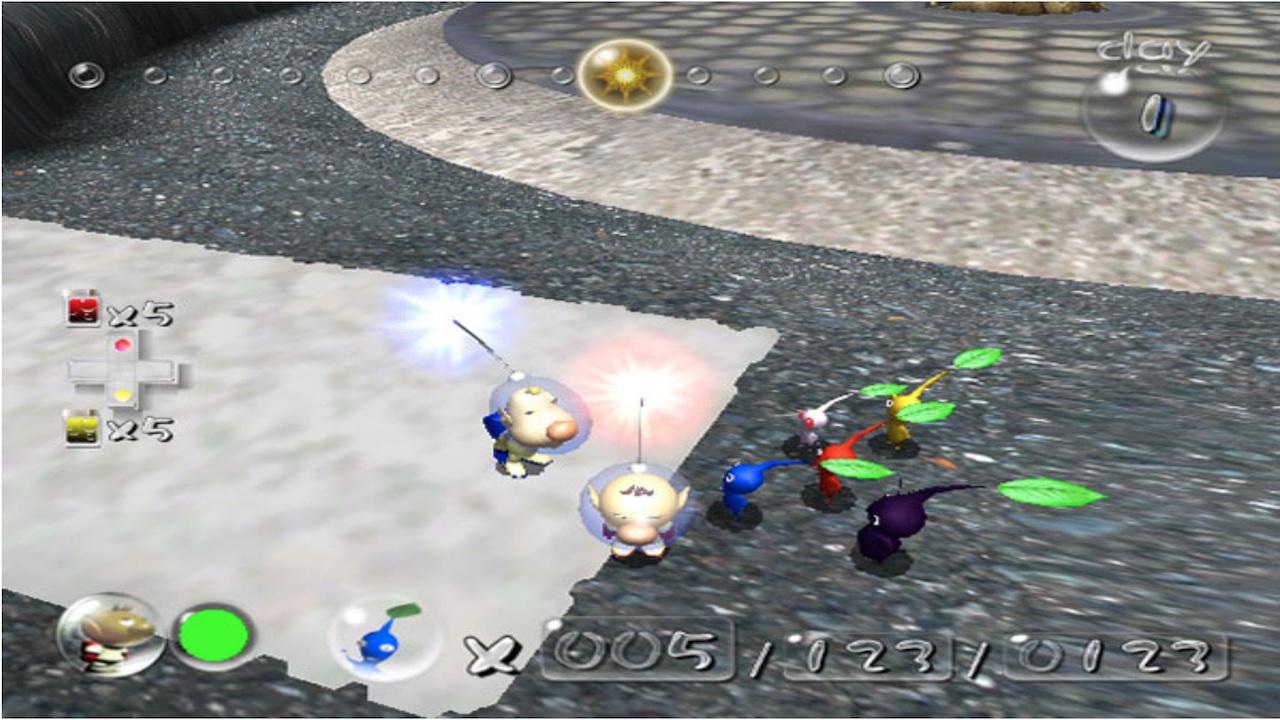 Visually speaking, Pikmin 2 still impresses despite being over twelve years old. Up close, the environmental detail and texturing can become a little bland, but zoom out and the game really blooms. The rich use of colour and environmental effects like flowing water, falling leaves, and snowflakes all make for a very believable virtual world. The character models are charming and possess great animation. Olimar, Louie, and the Pikmin are instantly lovable. It’s still quite an eye-opener to watch a horde of 100 Pikmin move in formation across the various landscapes of the game.

If you never got the chance to pick this up back in 2004, this is as good an excuse as any to experience it either for the first time or all over again. Of course we’ve been enjoying the fantastic Pikmin 3 since 2013, but the entire series since the GameCube have proved impervious to age, thanks to the fun gameplay and quirky, timeless visual style.