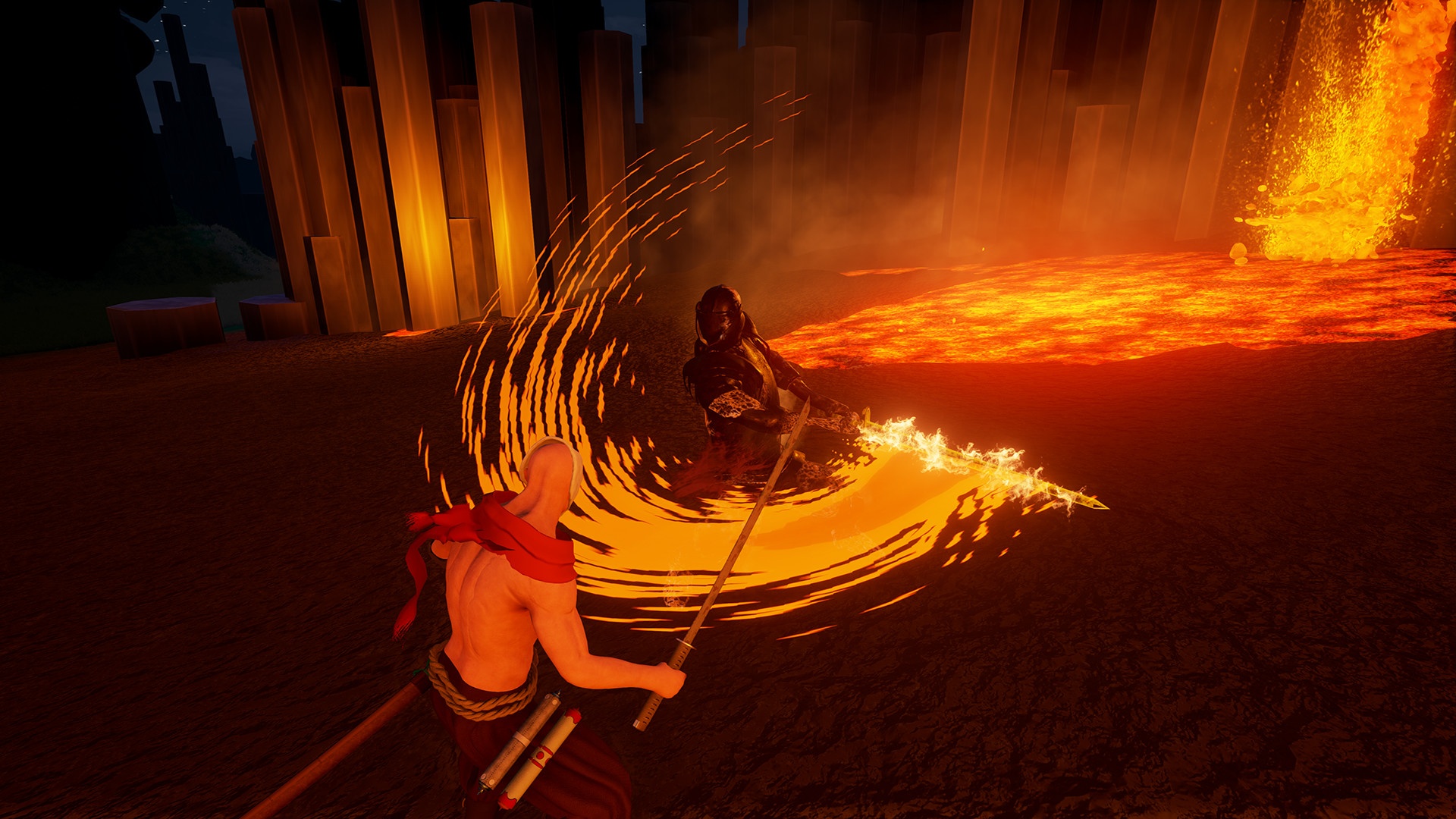 Blade & Bones is one tough nut to crack. Not long after taking my first steps into the sprawling fantasy world it has to offer, I’d met my maker at the hands of a bushido blade-wielding warrior who obviously did not like the look of me. Going in for a second attempt, I decided to avoid the same fate and instead seek out what other mysteries this sandbox had to offer. Exciting as it was to create my own path, I soon realised that in between all of the sight-seeing and the occasional duel, I didn’t have a clue what I was supposed to be doing.

All it took was a quick Google search to confirm my suspicions surrounding Blade & Bones. Developed by Coffee Addict Studios, this three-dimensional action adventure has all the qualities of a Dark Souls imitator. Not only are both the combat and controls incredibly punishing, but the lore and mythology is a minimalist enigma just waiting to be deciphered. Of course, this comes as no surprise as the Brazilian based development house proudly cite From Software’s deep fantasy series as an inspiration on their work.

Players take on the role of the last-surviving Orin, a deadly warrior silenced by his omnipotent creator after a failed rebellion. Finally freed from his prison cell, he must scour the land of Asocrac in search of seven legendary swords that hold the power to not only restore his voice, but also to defeat his creator once and for all. Along the way he’ll pick up techniques, relics and weapons that will guide his hand and help him fend off those who stand in his way. 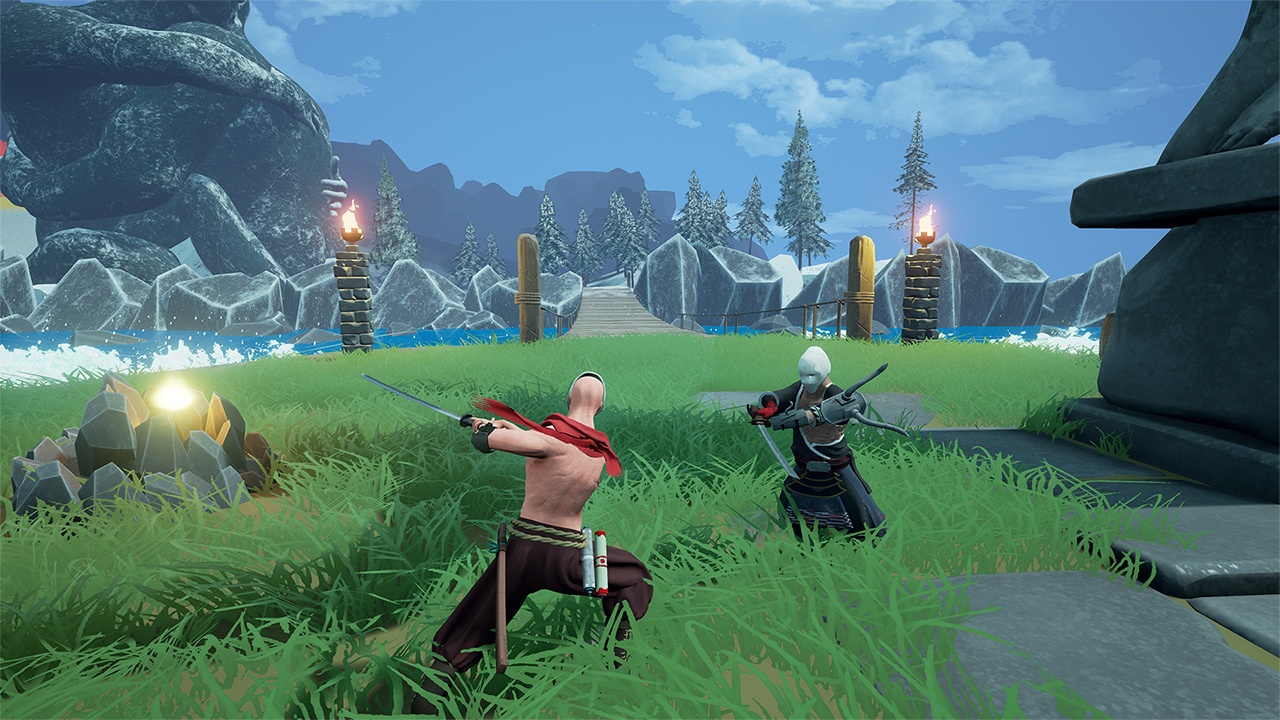 Much of this world-building comes from the opening tutorial, where players are given the chance to get acquainted with the controls before venturing into the big bad world. However, aside from the occasional cryptic message dotted around the landscape, there’s little else to flesh out the story and give the game any sort of flowing narrative. On the one hand, it helps keep the secrets of Asocrac shrouded in mystery, but without pace or direction, unraveling the mythology or indeed the story of this game becomes a challenge all in itself.

In some respects, the game allows the cel-shaded sandbox play area to do all the talking. Opening the door out of the prison for the first time reveals a large, seemingly endless world just begging to be explored. Indeed, that is part of Blade & Bones charm. There’s no one specific road that must be followed or on-screen cues to be your guide. It’s up to you to learn what secrets, puzzles and dangers stand in your way and creating your path becomes part of the fun.

Scattered around this lush yet sparse environment are zealous warriors, predatory wildlife and ancient demons waiting to put your blasphemous quest to an end. Upon entering their field of vision you’ll have to choose whether to fight for your life or flee further into the unknown. Sometimes, the latter option is the more logical choice as Blade & Bones features permadeath, without a doubt one of the most arduous gameplay mechanics ever invented. Six lives stand between you and the grave, and while purity spirits hidden around the game can replenish your life cells, they’re too few and far between for a game that isn’t afraid to pull it’s punches. 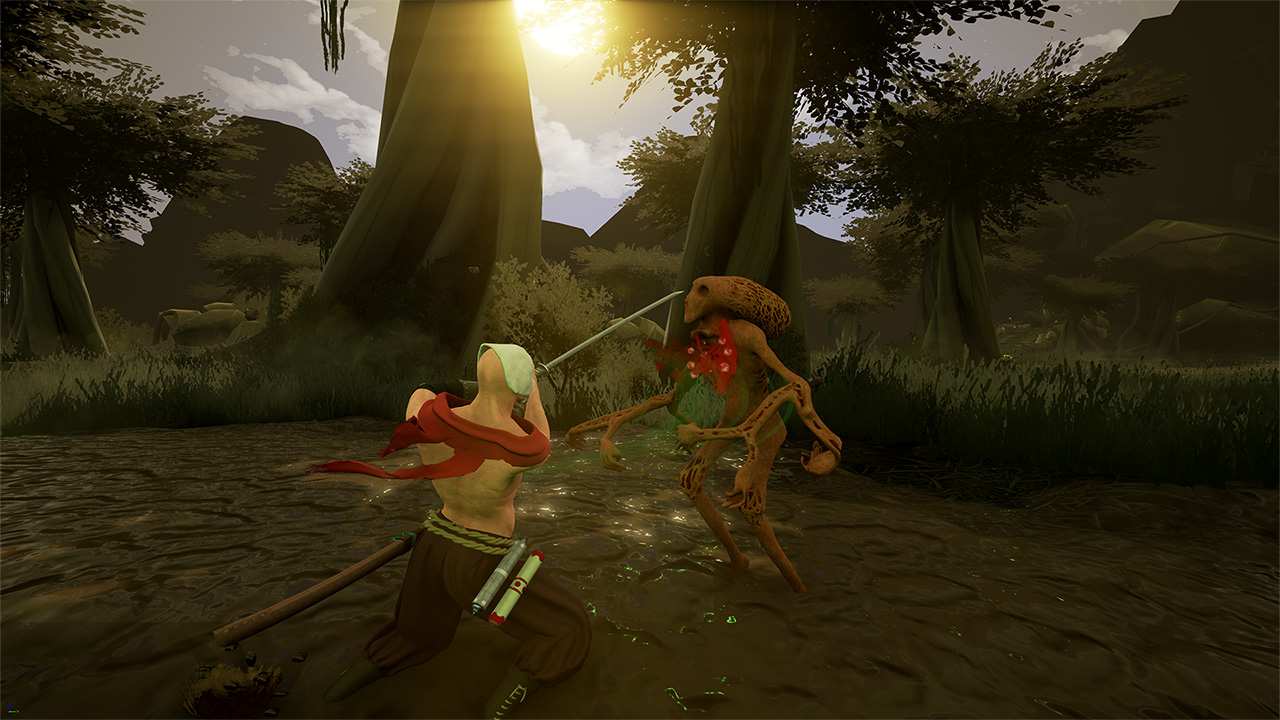 Nothing cements the fact that Blade & Bones is (to put it mildly) a challenging game more than the combat. Much like Dark Souls, you’ll have to use a combination of light and heavy attacks to outwit your opponent while an ever-dwindling endurance meter forces you to take a step back every now and then to reconsider your tactics. But while a variety of weapons and fighting styles can be discovered throughout the game, the most crucial weapon in your arsenal is timing. A collected, patient approach will often work in your favour rather than attempting to hack and slash your way to victory. But it’s hard to keep calm when the controls themselves are so unresponsive. One mis-timed strike can be all the stands between you and defeat, but when the hits don’t land or your character fails to follow instruction, Blade & Bones transforms from a challenging adventure into a frustrating nightmare.

Thankfully, the game’s aesthetics are there to keep you in a zen-like frame of mind. The cel-shaded environments are colourful and inviting, if not heavily detailed and a bit muddle in terms of a cohesive art style. Textures and lighting work in sync to create a warm aura, not unlike what we’ve seen before in the likes of Journey or The Legend of Zelda: Wind-Waker. And while there is evidence of clipping and frame rate dips during combat, it’s a small price to pay for a low-budget game that looks this good.

Overall, Blade & Bones is a bold attempt to replicate the Dark Souls formula. While it has some ways to go in terms of living up the high standard set by From Software, the influences are apparent and might be enough to persuade fans of the series to give it a try.