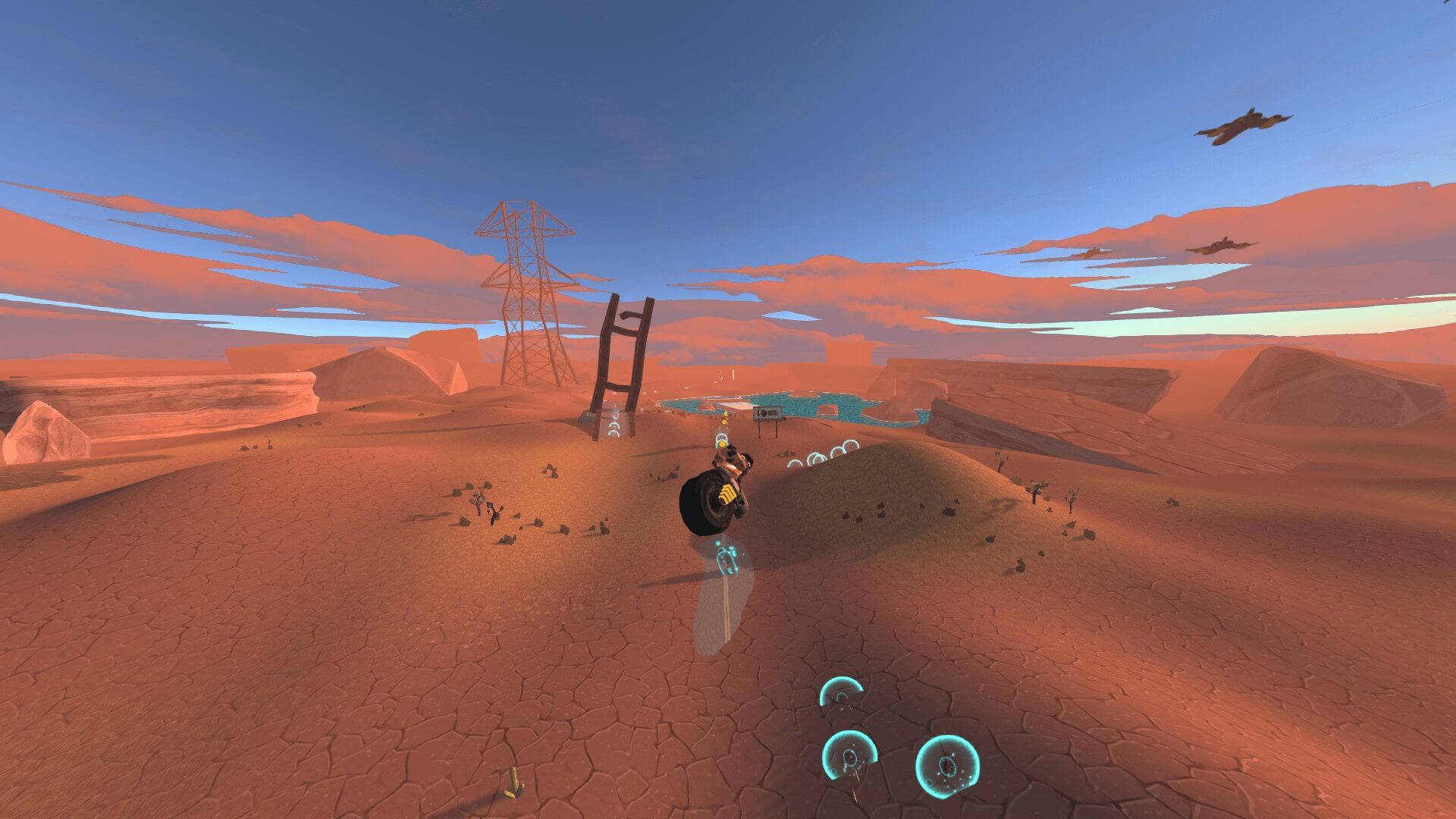 Defunct is a fast-paced, colorful, interesting experience in which players step into the rolls of a stranded robot who desperately wants to find its way back off of a majestic planet and back into space where it belongs. It’s an engaging story despite the lack of dialog and explanation; players see this little guy, who I’ve dubbed Robo, in his Sci-Fi, spaceship world, at the beginning of the game. But shortly thereafter, during the snazzy and simplistic tutorial, Robo gets itself tossed down the garbage shoot and abandoned on a planet that feels far too whimsical and neon to be anywhere on Earth as we know it, despite the claims otherwise. What comes next is a speedy whirlwind of fun driving mechanics, clever puzzles, and break-neck stunts. Released on December 21st, 2017, for PlayStation, Defunct is an original experience from the clever minds at SOEDESCO that blends together Action, Racing, and Adventure genre themes.

Robo suffers from a very serious ailment: Its engine is busted, leaving it both vulnerable and alone on this strange planet. Fortunately, quite a few of Robo’s mechanisms still work. For example, the “gravitize” feature allows Robo to hunker down and make itself heavy – which means faster, if going downhill, slower for up, and just plain heavier for things like buttons. It feels like a Sci-Fi version of Sonic the Hedgehog that merged with other Indie titles like Phoning Home. The controller mechanics are simple and precise, even if navigation can still be challenging in the 3D world of Defunct with all its hills and valleys, jumps, bouncy pads, and more. The tutorial is simplistic but frustrating at times, due to the limited space in the ship. However, upon landing on the ground below I found that the open spaces and rolling landscapes were perfect for this style of gameplay. 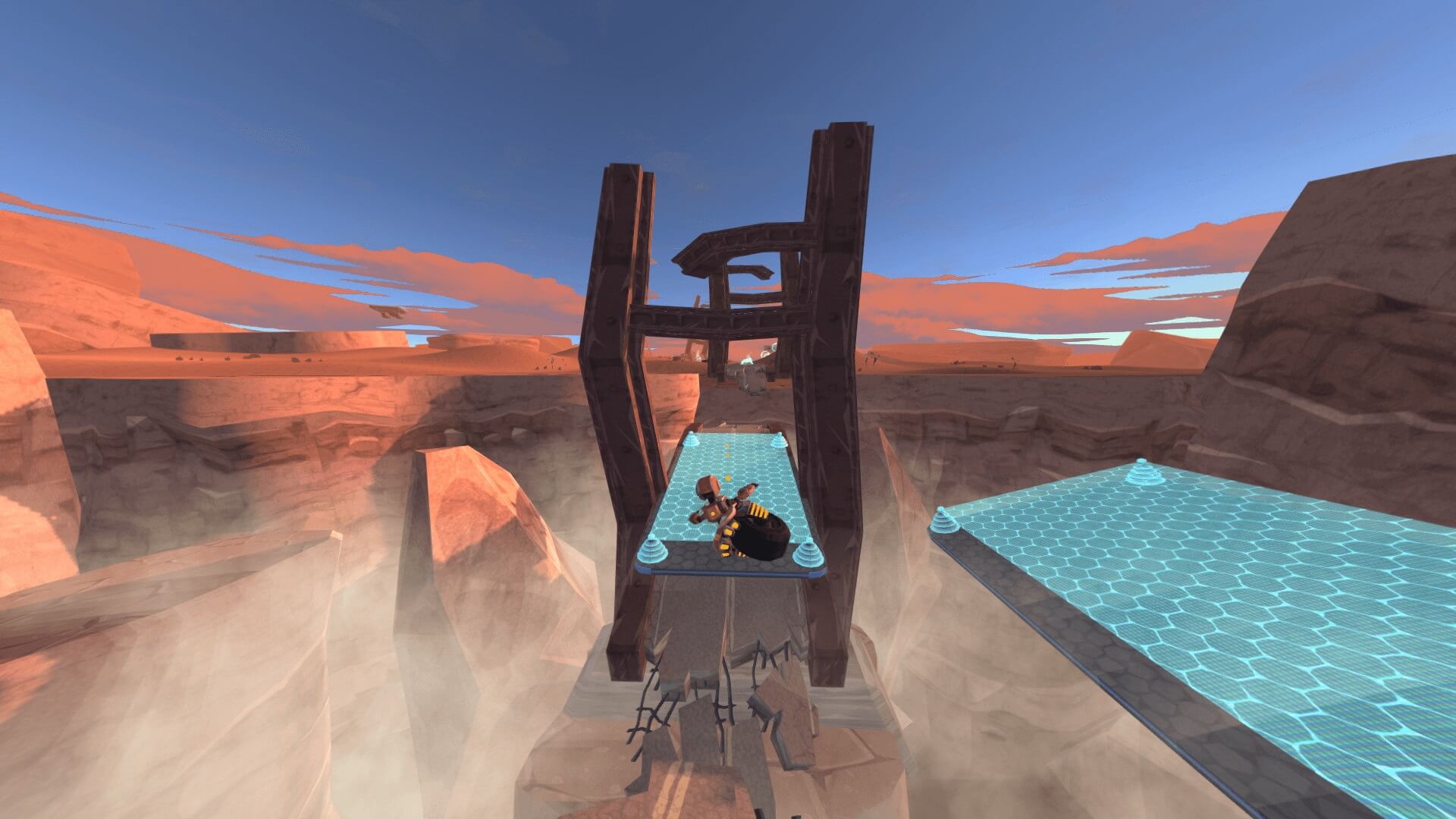 The storyline here is fairly minimal – the true point of Defunct is that it’s fast, colorful, and fairly relaxing to play. Zooming around, learning the gravitation mechanics, the jump feature, and how to use the environment around you without tons of lurking enemies is surprisingly relaxing. My only true complaint was that the busy scenery flying past, especially while looking for power-ups and keys, triggered my motion sickness heavily. I would caution players who suffer from the same ailment to be careful with Defunct since that’s the primary aspect of this title: speed. Despite the minimal plot, I found myself rooting for Robo, and wanting its experience on this strange planet to be a pleasant one. Enerjuice, one of the many power-ups in play, is abundant, and once you have the controls down it’s easy to reach break-neck speeds.

This post-human version of our planet has numerous locations to enjoy, from the rolling hills outside an abandoned city to a sun-scorched desert, to an enchanted forest. I was perplexed to see other robots similar to Robo zooming around, and just assumed that they, too, were marooned on this lovely apocalyptic version of our home. They seem to be the only true inhabitants that remain, and there’s a playful comradery in the way they interact with Robo.

The graphics are a little dated, but considering most of the gameplay involves zipping around without paying attention to details it works with this title. In fact, more elaborate landscapes would have likely made the world too overwhelming, even for players without a tendency towards motion sickness. The music was upbeat, and blended nicely with the experience; I would have enjoyed the soundtrack more if it would have stood-out slightly more, but its mellow jams further create the relaxing, low-key aspect of Defunct that I enjoyed so much. 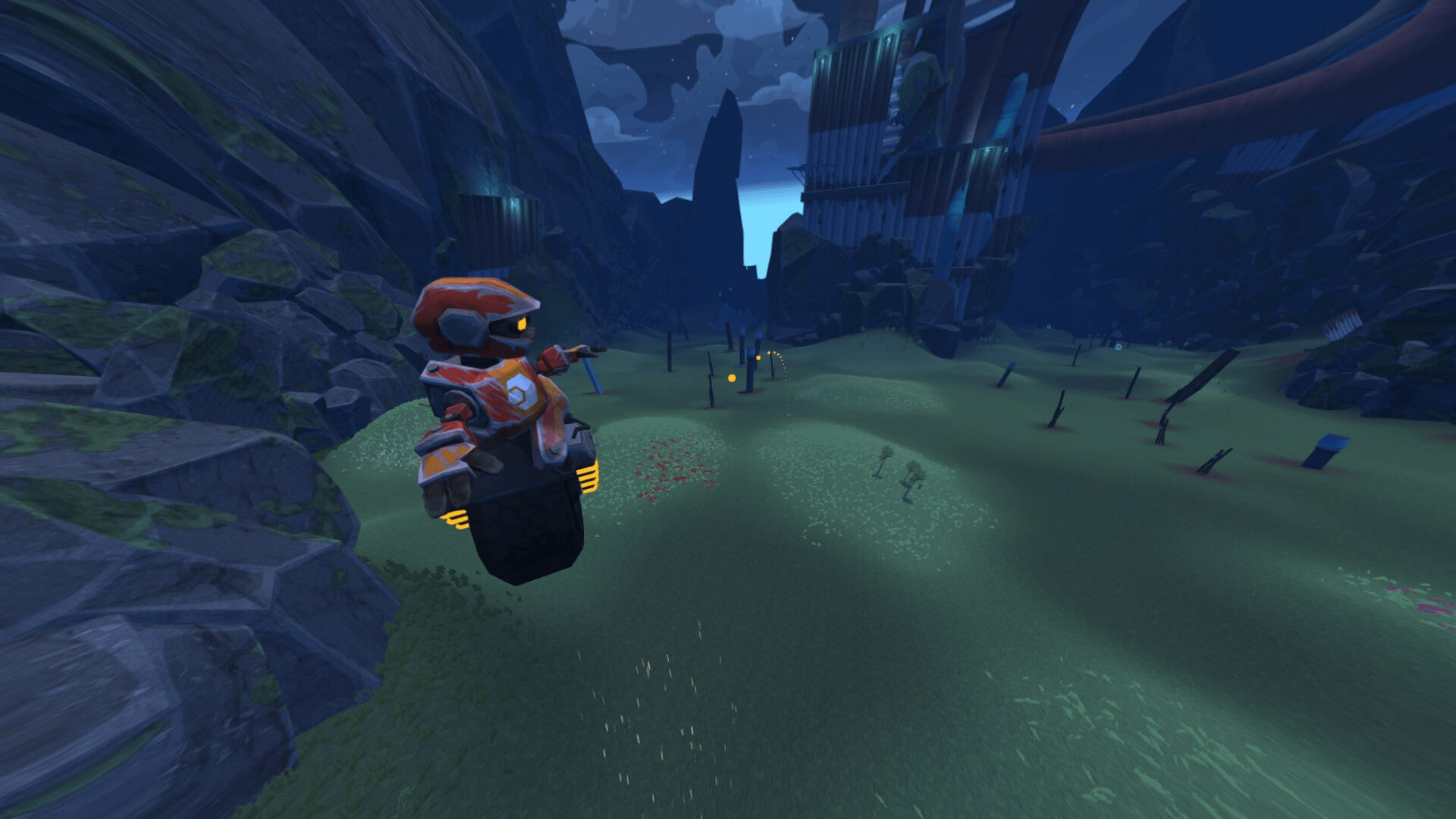 Defunct is, essentially, a game about speed and stunts. Gamers looking for an interesting plot, elaborate design, combat, and other themes need to search elsewhere. Robo is cute and has a friendly disposition that would serve it well in a Disney franchise, so it was easy to get behind this little guy as a protagonist. As a long-time fan of games such as Sonic the Hedgehog and Road Redemption, I enjoyed the 3D world as it whirled around me, disappearing behind me after a long jump or high dive. The game is fairly short, but the intrinsic novelty of playing a high-speed robot lends replay value, and the art is both endearing and engaging. There are enough Adventure themes here to make it interesting and entertaining, without bogging down the speedy, flowy dynamic that makes Defunct stand out as a worthy PS4 purchase.

The lack of a central cursor — or any stationary focal point — plus the fisheye affect of the camera angle makes this title high risk for anyone with motion sickness. Proceed with caution, friends, if this applies to you!

Defunct is a fast-paced, speedy-zoom style of game that gets players whirling, whizzing, and leap over Earth’s rolling hills.