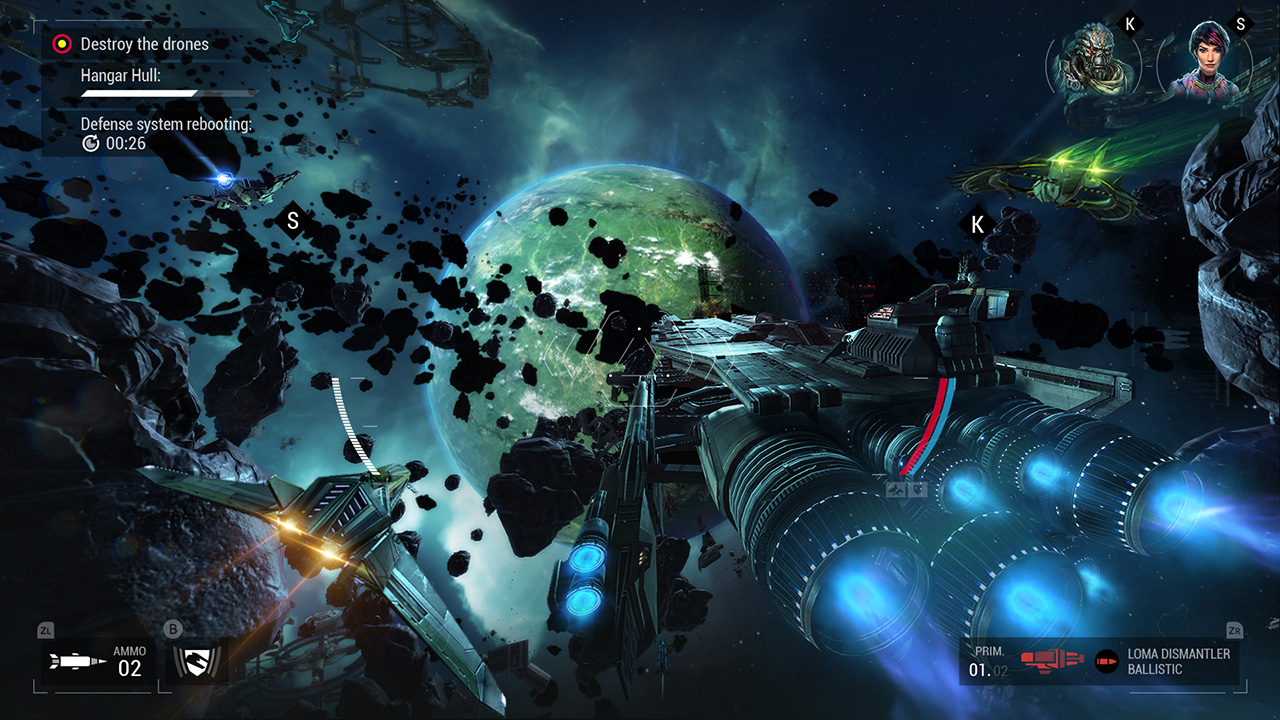 The legend of the Manticore can be traced back to Persian mythological tales. It was said to be a creature that bore some similarities to the ancient Egyptian’s Sphinx. With a human head, lion’s body and scorpion tail, it was truly an awesome sight. Developed by Deep Silver and published by Koch Media, Manticore: Galaxy on Fire has now completed its trip through hyperspace to dock aboard the Nintendo Switch. Will this be a deep space shooter that is just as awesome a sight to behold as its name-saked, mythological legend or does it all just contain a rather nasty sting in its tail?

The origins of the Galaxy on Fire series lies firmly upon the iOS and Android mobile platforms, with its free-to-play bounty-hunting, mining and trading mechanics. They all offered an element of free-roaming with their ability to dock at various space-stations, explore vast regions of space and take on secondary missions in a varied path that ran concurrently with their main story arcs. However, Manticore, upon the Nintendo Switch, offers a very different, although instantly recognisable, experience that hugely benefits with its transition to a console format; with conventional controls and sixty frames per second all adding to produce a stunning setting that sits comfortably within the Galaxy on Fire series.

The story begins as you find yourself caught within an altercation with a band of space pirates; the outcome of which finds you temporarily stranded from the damage that your fighter has sustained. With the help of Kyrrk and Saya, two mercenaries who happen to come across your location, the pirates are duly disbanded. This prelude offers a tutorial of the games flying mechanics, as your two saviours escort you back to the Manticore, a large carrier-type vessel, in order to carry out repairs to your ship. Under the command of Bryce Vantock, you join the crew of mercenaries aboard the huge starship as you fulfil a series of jobs for which you are hired. However, after a catastrophic event, known as “The Shattering”, you’re destiny takes you on a path to investigate who, or what, was responsible before the repercussions of that fateful day spread across the entire galaxy. 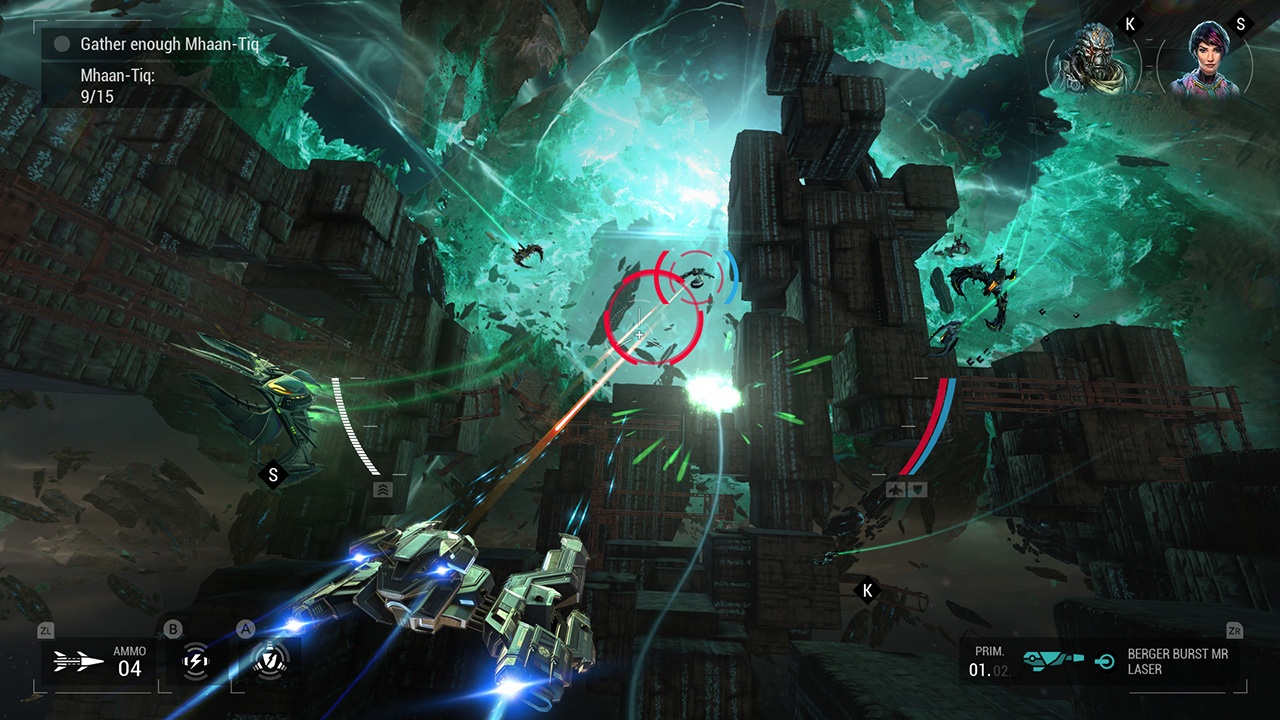 Spread over thirty-five missions, five of which are Switch specific, and three acts, Manticore: Galaxy on Fire has you dogfighting, boss battling, escorting and scanning over a campaign that can last in excess of eight hours; although depending on your chosen difficulty level and skill, this can be considerably more. Although story-driven, the game sets itself around a series of missions, or tasks, to progress its themes and plots. Cut-scenes are in very short-supply or incredibly brief, which hampers the flow of its narrative somewhat; leading to a rather disjointed execution in its story-telling. Saying that though, its episodic missions are a suitably thrilling affair that provides a very smooth experience on its space-flight mechanics. Each of the locales, or settings, are incredibly detailed and look absolutely stunning upon the Switch. However, whereby its origins concentrated on a free-roam element in its gameplay, Manticore is a much more linear and streamlined experience with its mission-focused setup.

Between missions, you do have an element of free-flying as you explore the region of space around you in a quest to recover various items of intel, as well as parts towards the development of a new type of Starfighter. Guided by a drone, you fly in-and-out and around some truly impressive structures that shadow around you. Gaining each specific item of intel opens up an encyclopedia of sorts; filling in the lost gaps of galaxy lore and information around the backstory of the galactic struggles. These can be viewed, again, in-between missions during your times of R & R aboard the Manticore. From here, you can also visit the hangar, where you can view acquired space-craft, upgrade specific features and weaponry, as well as outfit whatever ship you wish to take into combat next. Mission progression and information can also be utilised from the carrier’s bridge.

Successful completion of each mission awards you experience points, new weaponry and components for use in upgrading your available space-craft. These can range from more weapon damage, larger missile capacities, EMP emitters and cloaking devices, as well as many more variants. These all add to give the game a sense of depth in its mechanics, allowing you to personalise each craft to your own particular liking. However, many of the boss fights, around thirty of them, require you to outfit your fighter with a specific form of weaponry with which they are more vulnerable to. Although primarily a dogfighter, Manticore also has a spattering of missions which require you to collect certain items, or pass through specified checkpoints, in a time-trial style of gameplay. These sections of the gameplay differ invariably from the main elements of its premise, offering a weaker section to its mechanics compared to the thrill of deep-space combat. 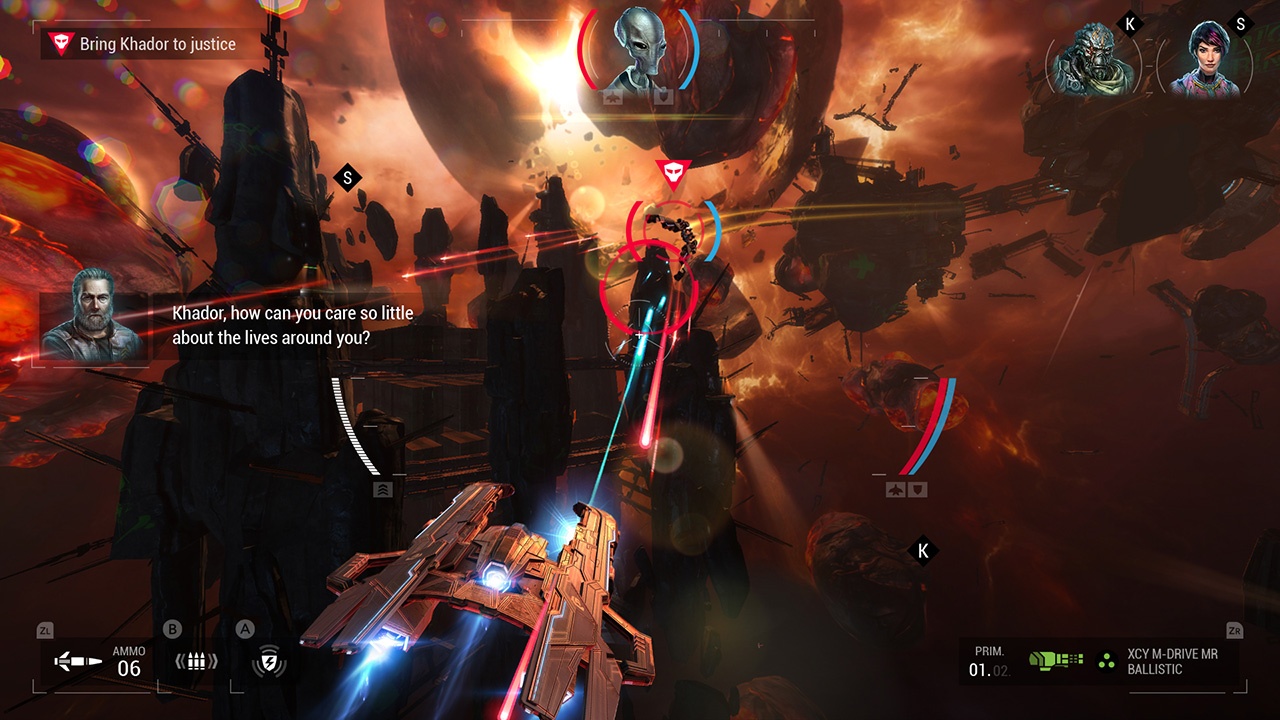 Presentation wise, Manticore is near-faultless in its aesthetics and sound departments. Emotive voice-overs and radio chatter add to the immersion of the game, as well as suitably sci-fi soundtrack that never gets repetitive or annoying. Running at 1080p docked and 720p in handheld mode, its graphical representation presents the feel of a more, triple-A title. Its control scheme is suitably mapped and offers a very smooth experience in its execution which soon has you flying through the tightest of gaps, evading enemy attacks and pulling off all manner of manoeuvers as you fight for survival within the vast expanses of space.

Overall, Manticore: Galaxy of Fire is a very welcome addition to the Switch’s library; especially with it filling the void of space-based titles currently available on Nintendo’s machine. Everything from controls to presentation feel particularly slick, which adds to the enjoyment that the game offers in its dogfighting and exploration elements of gameplay. Although the story falters in the way of its execution, it doesn’t detract from the overall experience. The transition from mobile devices to a console experience has been very successful, with this title nestling amongst its series of space operas very comfortably upon the Nintendo Switch; in fact, I’d even go as far as saying that its console base offers a vastly superior experience despite its linearity of mission structures. If you’re a fan of sci-fi shooters, then Manticore contains everything that you should be looking for: exhilaration, excitement and overall, fun. It’s certainly the stuff that legends are made of.