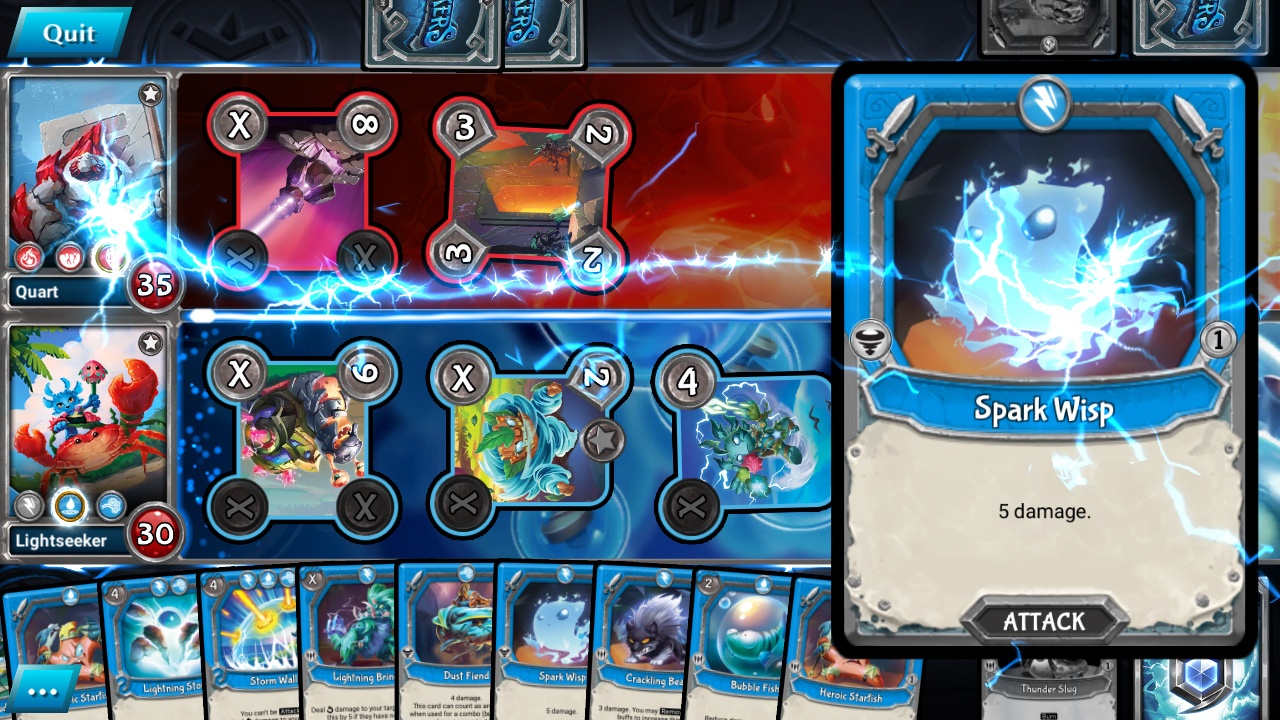 TCG, or trading card games can be a fun pastime, although it can be quite heavy on your wallet too in its physical form, as you pursue the heroic status of building the most formidable deck ever. It also requires you to have a set group of friends who also collect and play whatever game the cards may be based around. One way around this though, is the transition from a physical format to a digital one, allowing you to collect virtual cards, as well as play against a host of unknowns through online play; bringing your quest for the ultimate deck to a worldwide audience. However, it can be quite a niche market but in my opinion, they are always a style of gaming that’s worth a try. I simply adored the PS3’s The Eye of Judgement, yet could never grasp The Magic: Gathering to keep me hooked.

Developed and published by PlayFusion, Lightseekers is the latest TCG to see a release on a digital format; this time dealing a release onto the Nintendo Switch. Originally a physical card game, its concept also spawned a mobile version, on which this version of the game is ported from. The good news here though, is that this is a TCG that won’t weigh down heavily on your wallet, as its release comes as a free-to-play model with the ability to scan physical cards that can be added to your collection. It does contain micro-transactions though, but the game plays in such a way that these extra monetary options are never a necessity.

The game itself plays in a similar fashion to other fantasy TCG’s that are available or have come before it. Using a series of cards, you use their instructional powers to gain the upper hand over your opponent and win the battle. In past experiences, I’ve always found that the enjoyment from these type of games comes from their accessibility to play. Too many components and features can make them a confusing affair, with the simpler styles often being a more enjoyable experience. Thankfully, Lightseekers falls into the latter. Although there is a wealth of depth and options in the card building mechanics, there’s nothing here that feels overly-complicated or difficult to understand, making this an ideal entry point to the TCG style of gaming, as well as containing enough substance to keep experienced players happy. 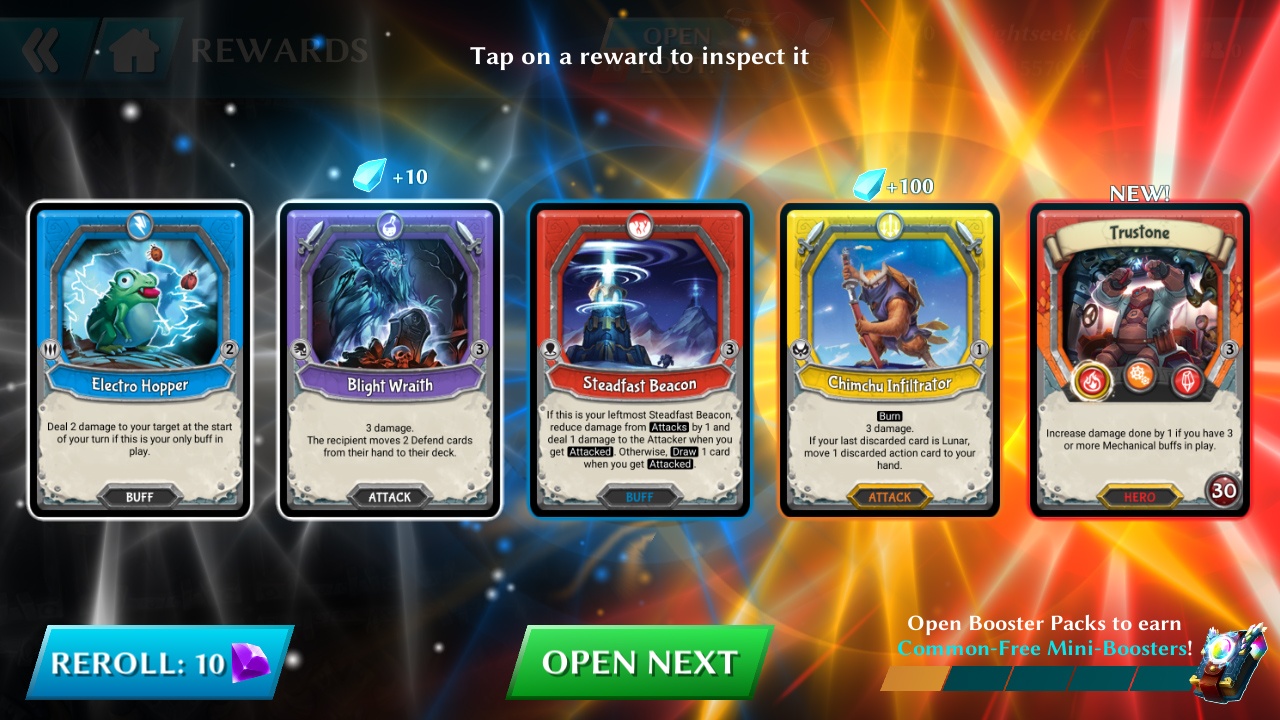 The game itself revolves around choosing a hero, of which the game contains over one hundred, and utilizing the functions of a variety of classes and abilities to win battles with online and AI opponents. By collecting decks and cards, all of which are relatively easy to obtain, you can use pre-set collections or build your own customizable deck to suit your particular play style. Each of the classes are built around six elements: Mountain, Storm, Dread, Tech, Nature and Astral. Within each thirty-six card deck, you build a series of thirty function cards that can attack, defend, buff or contain items. As well as these, each deck also contains one hero card and six combos.

Opponents come in the form of light sources that emanate from the various regions of Tantos; the mystical world in which the game is based. You each face-off across a playing field that involves taking two turns each in a tactical style of gameplay to reduce your opponents health points to zero, whilst keeping an eye on your own health and replenishing it when necessary and reducing the amount of damage you can take. There are a number of options here, depending on how you wish to play, or what cards you have available to you at that time. You can play two cards to deal extra damage, replenish health or set up a series of buffs and combos to come into play later down the line. However, you could also just play one card and take another from your deck to use on your next turn, or simply not play any cards and gain another two in the hope of setting up a more effective style of combat during the next round.

Each of the cards contain a simple set of instructions on what their actions perform. You can set up devastating attacks, strong defences or boost other cards with relative ease. You can even sacrifice cards of a certain element to activate combo cards; each of which offer further attributes in stronger attacks or more defensive capabilities. With its easily accessible style of play, there is an exciting tactical element to the gameplay, as you and your opponent try to outsmart and out-think each others cards and moves. It all plays at a nice pace too, with quick-fire matches that never feel too short or overly-long in their execution. 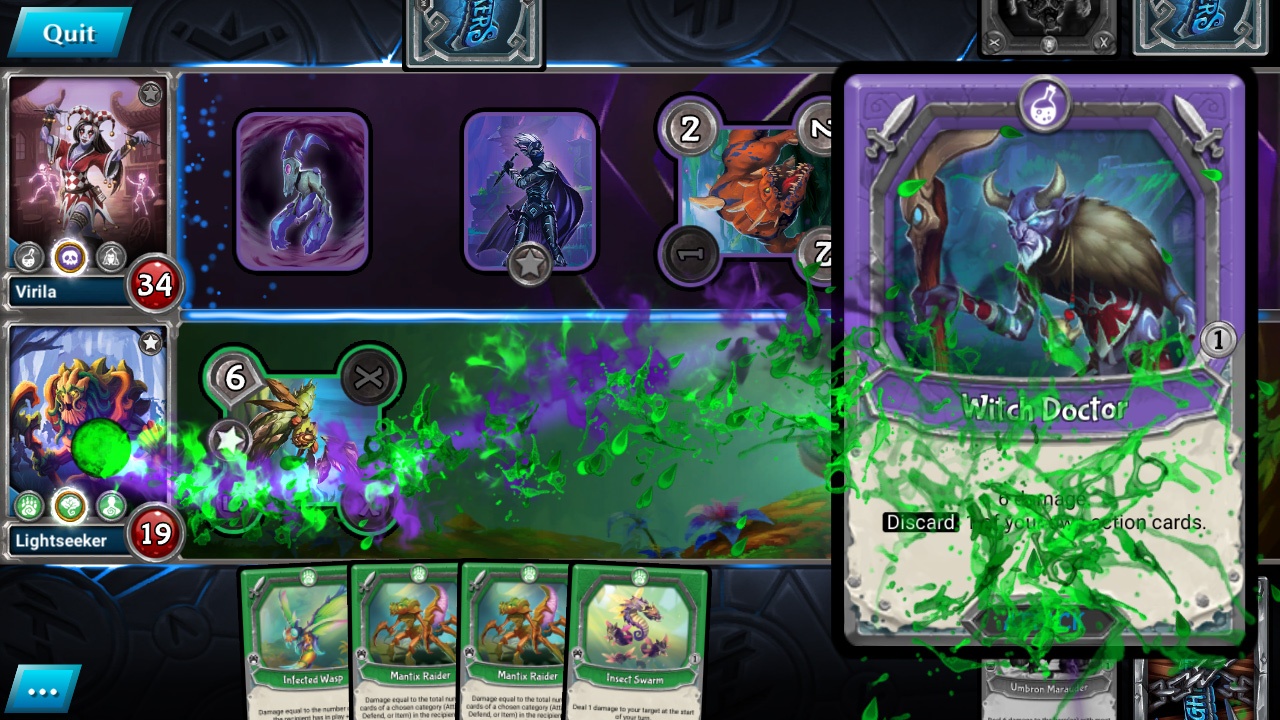 If your new to the genre, then the game contains an extensive tutorial mode through each of the elements. With each successful bout, you gain that element’s complete deck; building your collection in a fast fashion. As well as casual and ranked online play, you can also play through a series of campaigns and daily challenges against AI opponents. As well as these, the game also contains a number of missions and achievements, including weekly and daily challenges that reward you further upon completion with extra cards, icons, playmats and card backs. It all adds to produce a satisfying level of depth and customisation rewards that simply keeps you playing.

Whatever game mode you play, you are also awarded crystals and coins which act as a form of in-game currency. Using the in-game store, you can purchase a variety of items from booster packs to playmats and card backs to loot chests. It’s also here where the games micro-transactions come into play with the ability to purchase crystals with real-world money. Although these can help to provide a boost to your collection, allowing for greater depth in customising your deck, these transactions are mainly for cosmetic purposes and aren’t really a necessity; unless you’re looking for a head start. However, during my time with the game, I rarely came across any opponents who overpowered me.

Overall, Lightseekers is a much needed game for the Switch; especially if you’re a fan of TCG. It contains a huge amount of depth, variety and also boasts a long-term appeal; not bad for a free-to-play game. It also boasts cross-play functionality online, meaning you can play against other Switch owners and mobile users, ensuring that the game lobbies are always full and a new opponent is never far away. If there’s one bad point though about the game, it would have to be the lack of a conventional control scheme. This game is purely touch-screen only, meaning it can only be played in a portable fashion and not on the big screen. It’s by no means a game-breaker though and in terms of a tactical card game that entices and excites, then there’s simply nothing else like it on the Switch. If you’re seeking a game that isn’t light on content and variation, then this TCG is most definitely worth a look.

If you’re seeking a game that isn’t light on content and variation, then this TCG is most definitely worth a look.