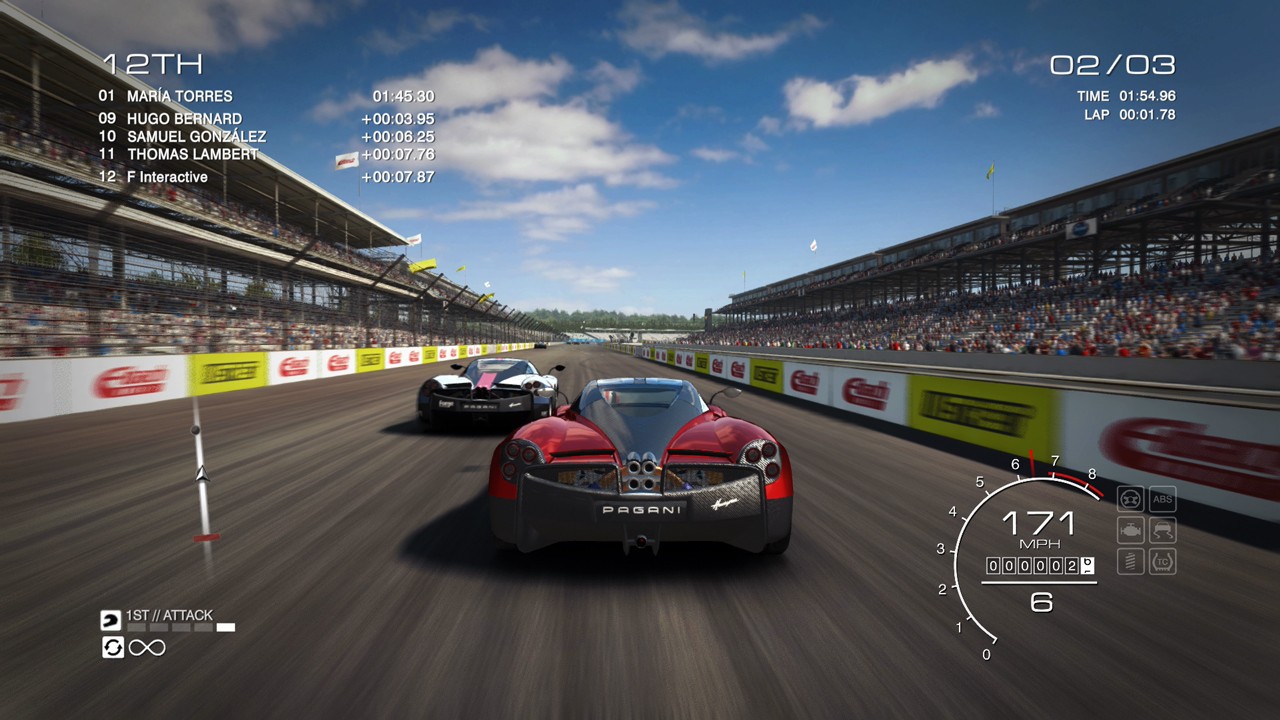 Over the last three years or so of the Nintendo Switch’s lifetime, it’s seen a bevy of racing games. From the fun of the circuit in Mario Kart 8 Deluxe to the arcade style in Gear.Club Unlimited 1 & 2. However, if there’s one style of racing game that’s missing, it’s the more serious style; one that focuses on realism, tour racing and a seriousness to its presentation. If, like me, you’ve been waiting with abated breath for such a game, then fear not, as Feral Interactive and Codemasters may have just the thing for you as GRID Autosport takes pole position to race a release onto the Nintendo Switch.

Although a new release on Nintendo’s hybrid machine, this is in fact a game that was first released in 2014 on the Xbox 360 and PS3 consoles. It’s certainly one that I missed, but that was probably because I was playing on the next generation of consoles; making this a strange decision to release the game on the previous generation. I would imagine that I’m not alone in coming across GRID Autosport for the first time with this release, but if you are, then thanks to the expertise of Feral Interactive, you’re in for a treat. This is because this is a game that focuses purely on racing. There’s no story mode as such, at least not in the style one may expect. By that I mean there’s no story to keep the narrative flowing, this is purely about experiencing the thrill of the race across a variety of disciplines.

Forging yourself a career takes to the fore here, instead of driving along the lines of a narrative. However, it’s all presented in such a way, that it soon becomes a totally immersive experience. This is due to some nice implementations within the presentation of the game and the sport itself, as well as allowing you, the player, to make a number of choices in how you want to play. The game opens with you inputting your details, such as name, age and nationality. From here, you then get to choose a team and from five disciplines within racing: Touring Cars, Open Wheel (Formula Racing), Street Racing, Endurance Races and Tuner Divisions. As well as this, the game also comes bundled with all previously released DLC, adding further options such as Destruction Derbies and Drag Racing. There’s a lot of racing here and a lot of variety, giving this title a shelf life that’s longer than UHT. 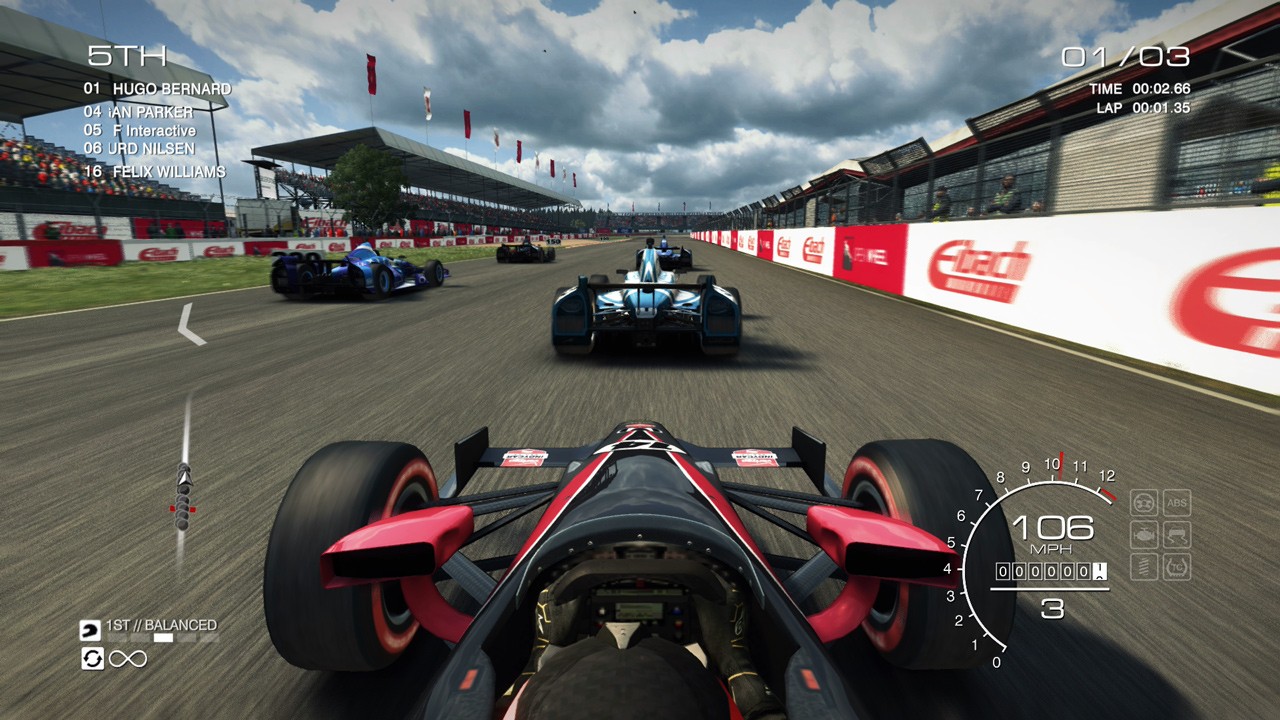 With such a choice in disciplines, the game guarantees that there’s something here for everyone. Have fond memories of Codemaster’s TOCA Touring Car series? Then you’ll fit right in the bucket seat of its style here. Thrilled with the chase of the Formula One series? Again, you’ll find the right formula here. Whatever your style, you’ll find each individual discipline just as playable as the last, with a distinct difference and skill-set required for each race type. For instance, the bumper-to-bumper grind of TOCA is a world away from the collision avoidance of Open Wheel; adding further to the choices and variations that the game presents to the player.

However, a racing game doesn’t gain merit just off choice alone. The mechanics of its style, performance, handling and presentation are just as important. Thankfully, all of these elements have been superbly implemented too, with detailed and realistic graphics, performance that never drops below 30fps, solid handling and a plethora of fine details, such as crew communications and the ability to gain up-to-date information on the state of the race, your vehicle and team-mates. There’s also a staggering amount of choice and options here too, from racing guides such as steering and braking assists, a host of camera angles and control options that include gyroscopic handling and support for other controllers; namely the Gamecube controller and its analogue inputs.

Its default ZL and ZR control scheme will cater for the majority, although these too can be customised. Want to use the right analogue for acceleration and braking? Then you can. Its gyroscopic control scheme is functional, but in reality, it’s a novelty at best and probably the weakest inclusion within the game. The graphics too, can be adjusted with a variety of modes from graphics to performance (60fps) and a battery saving mode; as well as a free DLC package that gives the cars Hi-res textures. In all honesty though, the difference between them is negligible and no matter what mode I chose, the performance was never degraded. 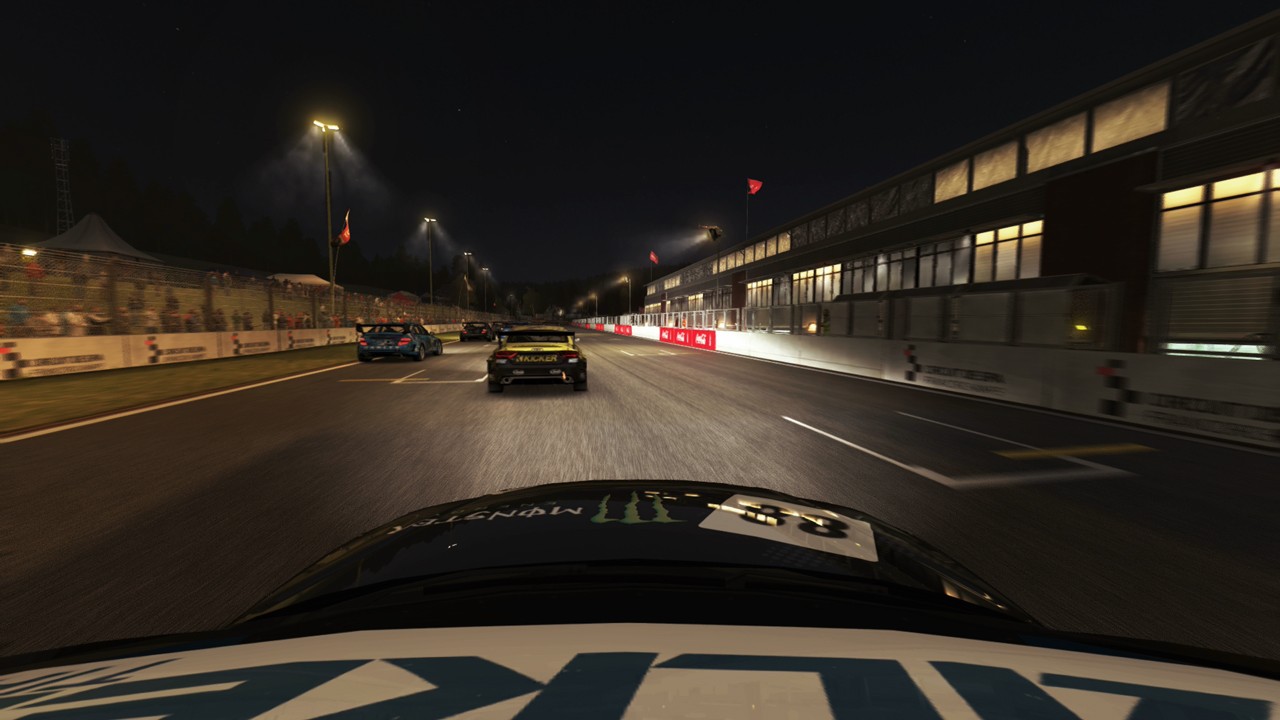 The physics engine and AI are also worthy of a mention here, as both provide some thrilling aspects to the racing and add further to the realism that the game portrays so well. There’s no body-crunching right-offs á lá Burnout style here, but wear and tear do make their mark on the bodywork. Scratches, aerofoils and wheels can all bare the marks of an aggressive race and wear-out over time; largely due to the competitive nature of the AI controlled vehicles that you race against. Collisions all act in a realistic fashion, often causing your rear-end to slide out or a side collision forcing you onto the gravel. It creates a more tactile level of driving that is needed to ensure victory; something that provides a fantastic challenge if all of the driving aids are turned off.

Upon its initial release, many review scores reflected the omission of any multiplayer aspect to the game. However, since then, the developers have continued to support the game and recent updates have added a local multiplayer option; with an online component coming in 2020. The inclusion of these two elements, ultimately, propel the game even higher; especially with its promised capacity of online racing. As with the single-player element of the game, its local couch play (split-screen or wireless) performs at the same level of detail, frame rates and performance; making this a very satisfying racer indeed.

Overall, GRID Autosport is the racing game that the Switch has been waiting for. Its level of detail, realism and choice for the player is simply staggering; producing a series of exhilarating race styles within a variety of disciplines. In fact, this is easily one of the best looking and performing games on Nintendo’s console and if Feral Interactive continue producing games of this quality, they could easily become the new Panic Button. Of course, the online component is still in the pipeline, but with its staggering amount of options and race styles, all previous DLC included and local multiplayer, the game still holds a prominent position on the podium. So, now we have it, us lucky Switch owners have the choice of a go-to racer. Want family fun? Then Mario Kart it. Want an arcade adrenaline fix? Then Gear.Club is your man. Want a realistic racer though, then this is the game that will sit nicely upon the GRID.

GRID Autosport is another example of what can be achieved on the Switch, with a high level of realism and technical performance that ensures a podium place.