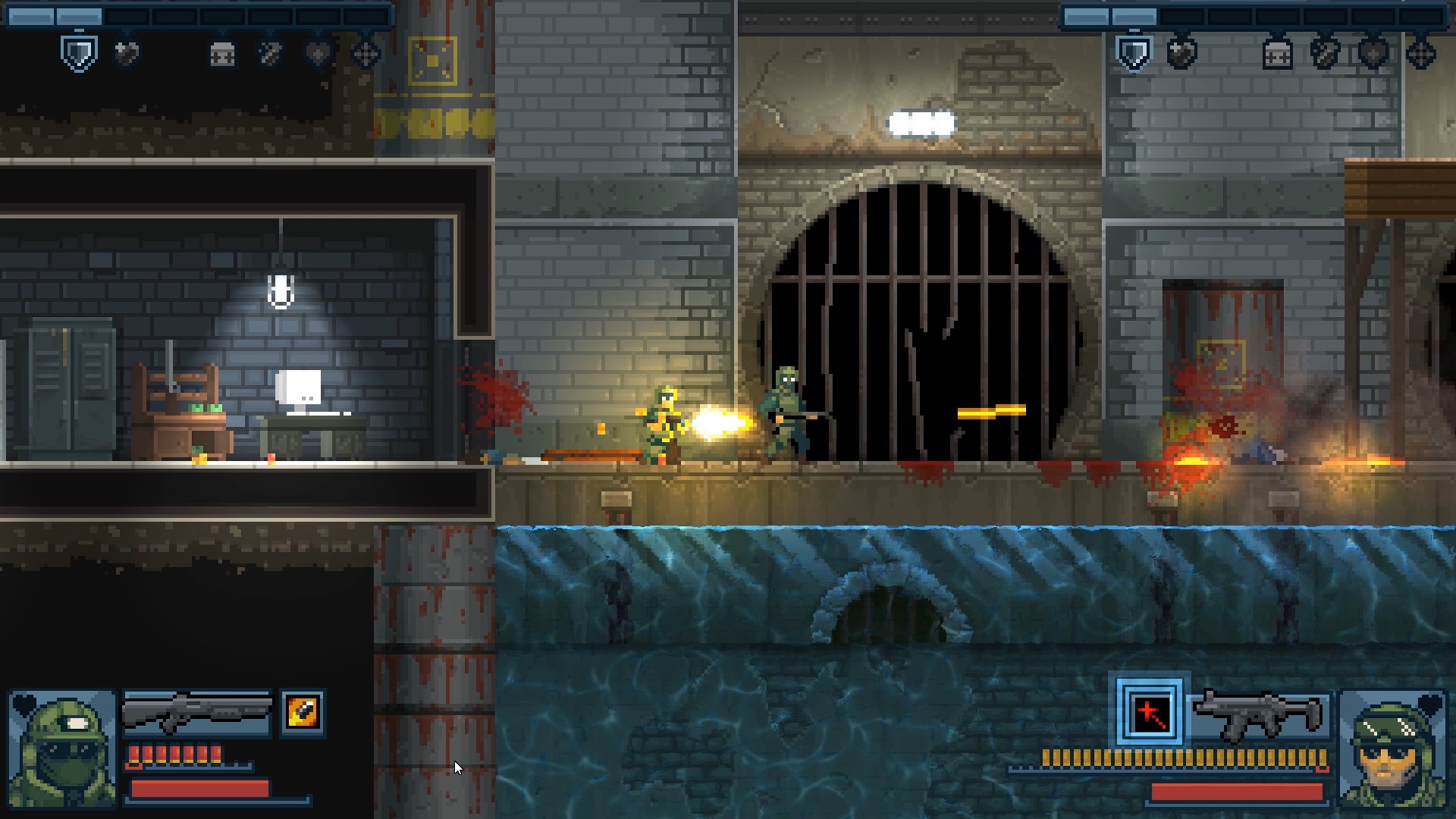 Door Kickers: Action Squad takes form in a beautiful pixel art style, full of tiny details that makes it much more pleasing to the eye than other games that tend to opt for pixel art just for the sake of it, or just for the sake of calling their game “retro”. In Action Squad, things such as slight splashes of rain and blood, rust in metal objects, and the humidity in the old buildings occupied by gang members are all things that you can spot. I love these kinds of details, as it shows that a lot of care was put into the game, even if it ultimately doesn’t affect the gameplay.

The soundtrack is also nothing short of amazing. It gives off this 80’s/90’s feeling, and it fits perfectly with the setting of the game. Unfortunately, my technical jargon in regards to music is fairly limited, so I’m afraid I can’t do much justice in describing it to you. If you’re curious and want to have a quick taste of it, I’d suggest listening to On Vacation and Action Squad, my top two tracks from the game’s soundtrack, composed by Gavin Harrison.

In contrast to the original game in the series, Action Squad is a 2D action side-scroller, where you play as one of several SWAT agents charged with the task of cleaning Nowhere City of criminals. While the game can be played completely solo, playing it with a friend or a random (thank you for online quick matching) makes the game a lot more fun. With that said, the game not only supports online co-op but also local, which is sure to please a lot of people. 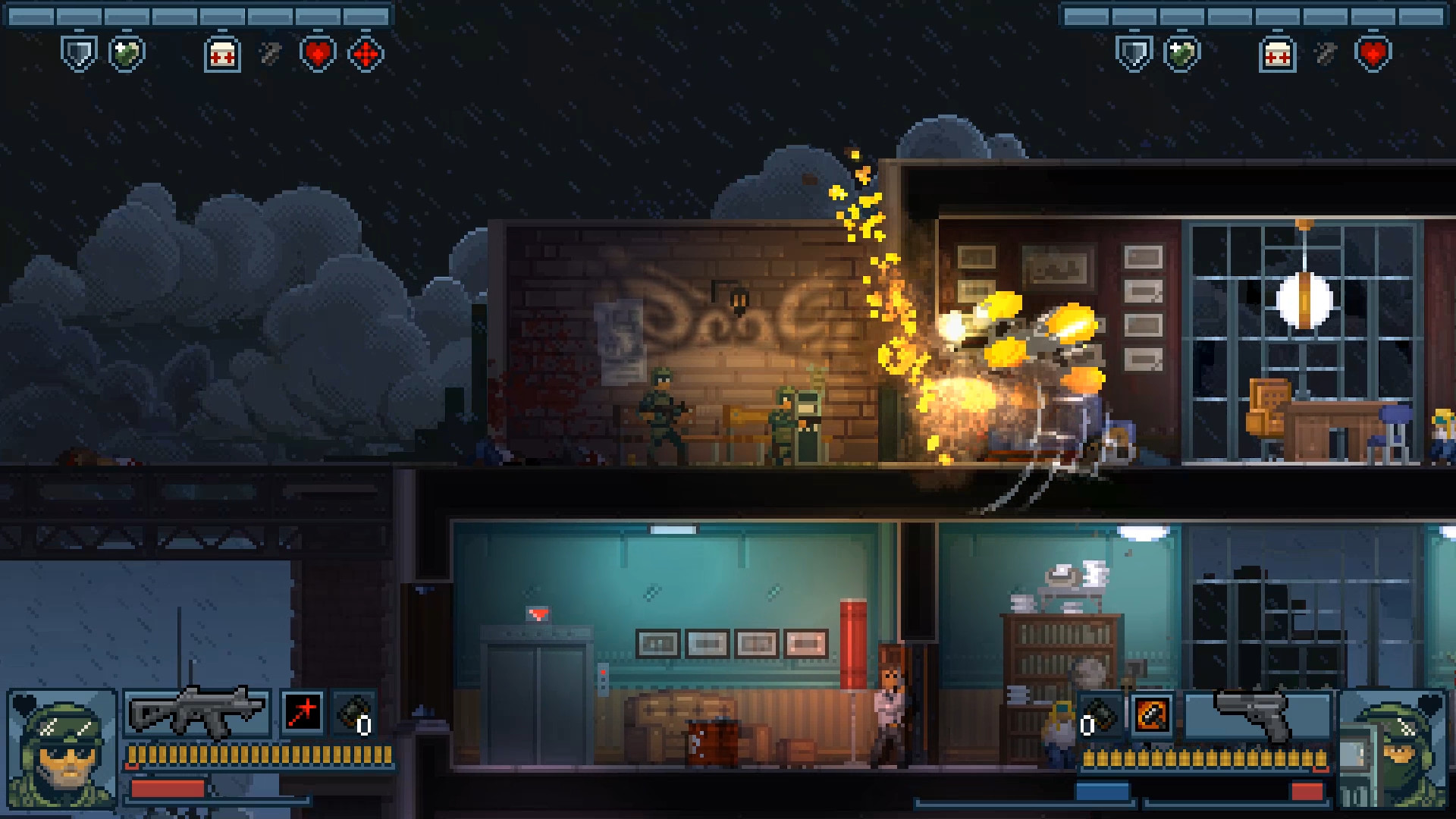 The game is pretty linear due to its mission structure, but there is enough variety to keep things fresh, as well as different spins on the base formula. The game’s campaign, which consists of 5 different zones, each with 12 missions, will probably take you around 7 hours to complete. It’s worth noting that while there are no checkpoints during missions, each level is pretty short, usually lasting somewhere between 2 and 6 minutes. However, on top of that, there’s also an Infinity Tower mode, where you have to go through endless waves of enemies as you climb up a never-ending tower. Then there are also 12 challenge missions, which initially started as a weekly thing but stopped at the 12th. Finally, there’s the Zombie Invasion mode, which allows you to play the entire game, but with zombies. While this may sound rather cliché, it is actually fun and provides an extra challenge, as you’re not only fighting zombies and undead criminals, but you also have to close portals from which zombies pour through.

For the vast majority, each level feels like a unique challenge. Even though level completion always relies on the same victory conditions being met, map layout, structure, the feeling of not knowing what’s behind each door, as well as levelling up your characters, helped in compensating the repetitive nature of the game. That’s one of the main things about Action Squad, the fact that you can play with five different characters and level them up separately. Each character plays a different role and suits a specific playstyle, or even in some cases a certain mission type, but I found myself having almost the same amount of fun with all of them. The grunt, or as the game calls him, the Assaulter, is the easiest character to play with and certainly the one I’d recommend starting with, but then you also have the Shield (pretty much self-explanatory), and the Breacher, and this one will probably be your favorite if you’re into wreaking chaos and havoc as he’s fond of shotguns and close-quarters combat. On the other hand, the Recon, which uses suppressed machine guns, and Agent Fergie, a pistol-wielding agent that can dodge, are my least favorite characters.

Each one of these characters provides a different set of weapons and equipment for you to unlock, as well as ultimate abilities and their own tree of passive bonuses. The weapons are what you’d expect to see a SWAT member using, just your regular carbines, submachine guns, shotguns, pistols, etc. However, some of the ultimate abilities are actually really useful. My favorite has to be the ability to call in sniper support, which eliminates up to 3 enemies visible on the screen. While the game is fairly accessible, it does reward those who seek to complete levels with 3-star ratings, something which is rather challenging in later levels, as stars are used as currency to unlock new weapons and gear and shared across different characters. 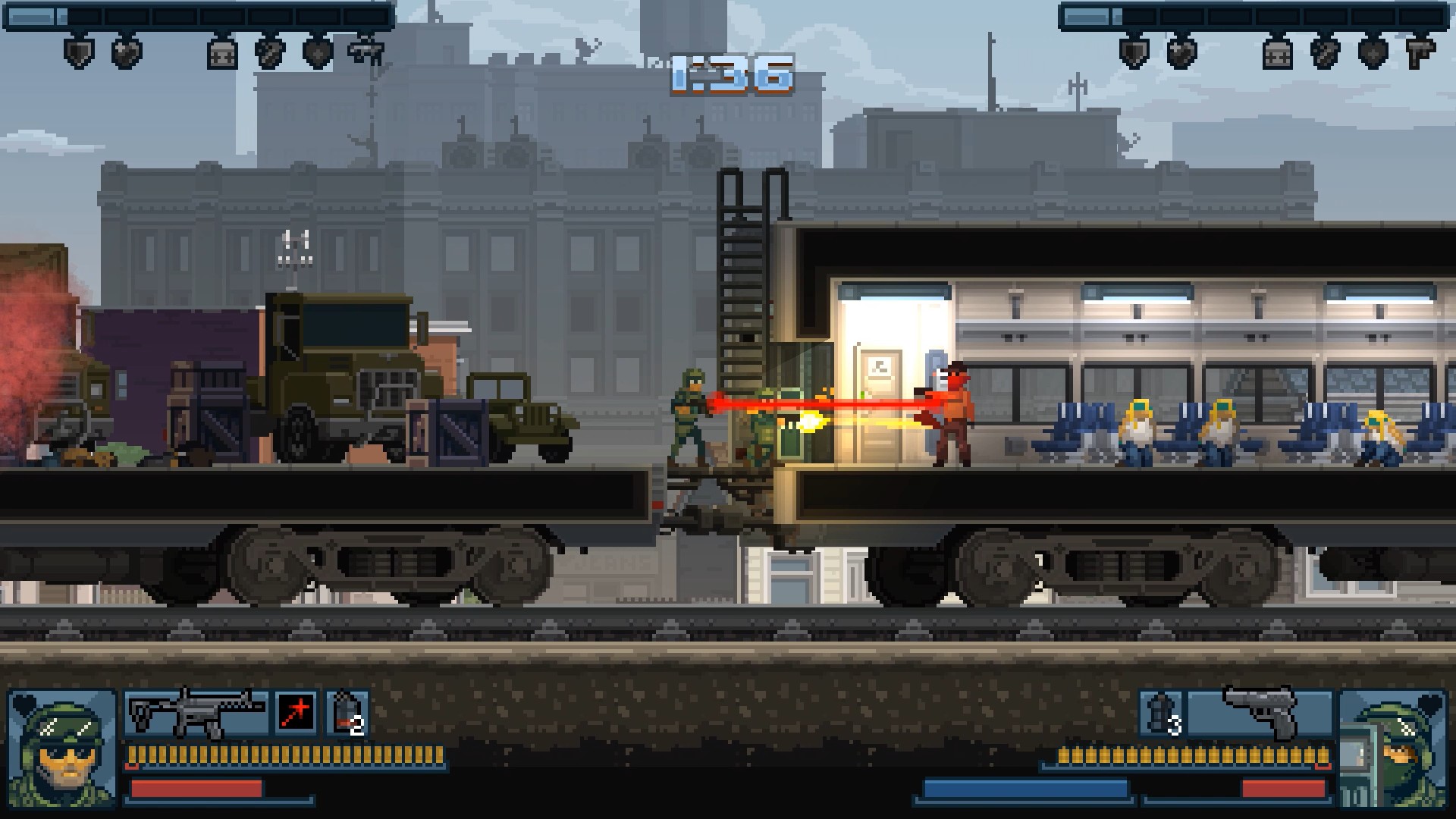 If there was one thing that bothered me at first when I started playing the game, it was the fact that you can only shoot horizontally. At the time, I would’ve much preferred an approach to shooting like the one in Metal Slug, but it quickly became obvious that the game works a whole lot better this way due to its tactical nature and having to face enemies head-on. Another thing that did bother me every now and then was the hostage AI, as some of them, either once you free them or when they have bomb vests strapped around them, tend to put themselves between you and enemies, which a lot of times ends up in unnecessary bloodshed, and me missing my perfect mission rating.

Do not be fooled by what you might see initially read about or see, as the game is much more than a straightforward action game. There are a lot more tactics reminiscent of the original game than it might seem on a first glance. Small things such as being able to take cover behind small objects, smoke grenades, flashbangs, alternate weapons fire modes, breaching charges, and the support items that you can summon during missions (like body armor or extra lives) add a lot to each run. Nonetheless, I would have liked to see more enemy types and different mission objectives. That isn’t so to say that what’s currently in the game isn’t challenging enough, it’s just that the game could use less repetition in terms of mission structure, even though the maps are unique on their own.

Still, a big plus of Door Kickers: Action Squad is Steam Workshop support, which, if you’re into modding, might help mitigate these things, as it allows you play on player-made maps (thanks to the existence of a level editor), as well as play with new weapons and characters. In any case, despite its simple nature, when I look at Door Kickers: Action Squad as a whole, I can’t say anything less other than that I’ve been having a blast with it, no matter which way I decide to play it. It’s certainly one of those games that I’m going to keep installed on my computer for when someone comes over and wants to play something quick and fun. If you’re someone who tends to be even remotely interested in 2D side-scrolling games like this, Action Squad is probably one of the best out there at the moment.

Door Kickers: Action Squad is one of the best spin-offs that I’ve ever played. It might look like a regular 2D action side-scroller, but it will surprise you.