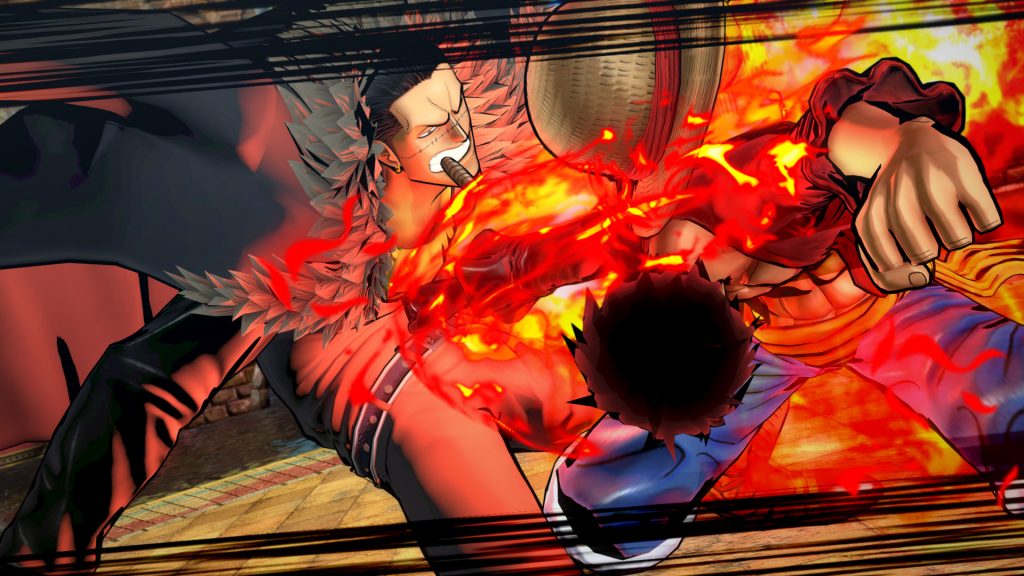 Eiichiro Oda’s hugely successful One Piece series has, believe it or not, already received 38 video game adaptations (even more if you include the multiple spin-offs). Starting off on the humble WonderSwan back in 2000 (remember that?), One Piece, like the majority of hugely popular anime/manga franchises, has had something of a rocky relationship with the world of video games – quality levels have ranged wildly between decent and, well, damn right terrible, but luckily, Bandai Namco’s latest, One Piece: Burning Blood, is (despite its issues), undoubtedly one of the better ones.

Like the recently released, and altogether fantastic, Naruto Shippuden: Ultimate Ninja Storm 4, Burning Blood is a gorgeous 3-vs-3 fighter that looks absolutely fantastic, is largely enjoyable to play, and is packed to the rafters with exceptional fan service. It might not be quite in the same league as Naruto’s most recent outing, but it’s certainly in the same ballpark with the game leaning heavily on the relatively standardised rock / paper / scissor mechanics that seem to provide the core for so many of these anime-inspired fighters.

It’s hardly Street fighter (heck, it’s not even Mortal Kombat), but despite its lack of tournament level depth, One Piece: Burning Blood is nothing if not incredibly fun to play. Fans of the series will inevitably get the most out of this character rich fighter, but thanks to those aforementioned standardised controls, getting into the game, depite its array of visual pyrotechnics, isn’t actually all that difficult.

Street Fighter, Guilty Gear, BlazBlue, even Tekken and Soul Calibur; these are all fantastic fighters, and fundamentally superior to, Burning Blood, but the one thing that they all have in common is an incredibly steep learning curve for entry level players. Street Fighter V is an exceptional game, but rock up online without hundreds of fights under your belt, and the results can be somewhat painful. The same can be true here of course (the best players will ultimately rise to the top), but the level of entry isn’t nearly as high. Get to grips with the fundamental controls and you can at least give it the old college try. 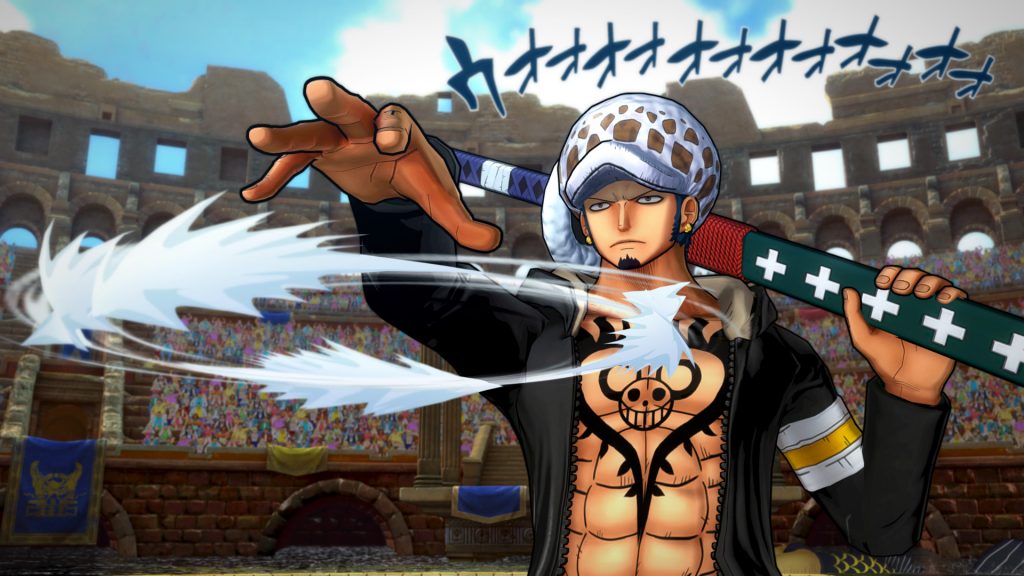 Spectacular character specific attacks are as easy to pull off as standard combos, but while pulling of any particular move is never more than a single button press away, the depth and subsequent skill come from knowing when to pull of said moves and when to get on the do one express. You can go into a fight and easily pull of an array of visual spectacular moves, but if your opponent knows what they are doing, they will almost certainly be able to deal rather easily with such an uncultured button-mashing approach by employing the games’ simplistic but effective range of dodges and blocks.

Whether it be the use of carefully timed sidesteps or the tactical use of guard breakers, Burning Blood actually offers an impressive range of defensive abilities to deal with your opponents attacks. They might not be as visually impressive as the excessively explosive attacks, but they do provide a semblance of balance and a gentle but much appreciated learning curve.

Still, as important as these finer points are to the potential longevity of the game, there is no doubt that it is Burning Blood’s impressive collection of character specific attack moves that ultimately steal the show. Not only do they represent an impeccable attention to detail and a genuine love for the source material, but they also manage to deliver the kind of whollop that makes taking out your opponent incredibly satisfying. Visual pyrotechnics are all well and good, but unless they are genuinely impactful, they can often feel like shallow firework displays – that’s not a problem here. Each strike lands with devastating effect with the best K.O.’s sending your opponent spiralling off the screen and crashing into the landscape in the distance.

Of course, being a 3 vs 3 fighter, players are encouraged to try out an array of characters available from the games’ ample roster of fighters, and while the control scheme ensures that a level of proficiency with all fighters isn’t all that difficult to obtain, their speed and range does at least make for some potentially interesting team ups. It’s hardly the most balanced fighter in the world (some special attacks are clearly more useful than others), but the variety available does at least make finding the ‘perfect’ team an enjoyable aspect of the experience.

While the combat itself is never anything less than fun, the package that surrounds is a little bit more of a mixed bag. Online options, while basic, are certainly enjoyable – I had no problems when trying the game out online in both casual and ranked matches, and despite the more gimmicky, Pirate Flag Battle providing little more than a carrot to keep players fighting for their specifically chosen Pirate Faction, like games such as Helldivers before it, there is something to be said for your victories having an impact on a global scale (even if that impact is inevitably going to be very small). 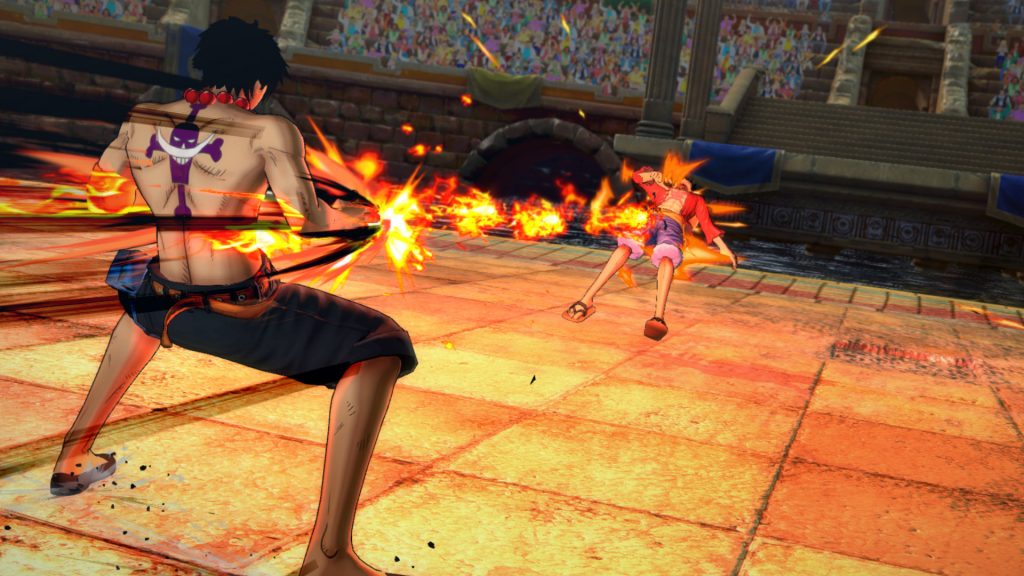 The big draw however is the games’ story mode. While it was wise for the developers to focus on a specific aspect of the 750+ episode anime series, by concentrating on events halfway through the run, those without prior in-depth knowledge of the series might find themselves somewhat lost at the array of references and the mountain of assumed knowledge. Still, the tale, centring around the Paramount War arc and split amongst 4 unique perspectives is definitely a fun one, and even as someone who doesn’t know a great deal about the One Piece series or the extended lore, I still managed to enjoy the story being told (thanks in no small part to the games’ consistently fantastic visuals and gorgeous cel-shaded design).

As fun as the story is though, there are some problems; most battles are relatively straightforward, but for one reason or another, Bandai Namco have seen fit to throw in the occasionally horrendous difficulty spike. These spikes can all be overcome, but some of the events are outrageously harsh and can temporarily rob the game of its sense of fun. The events are nice and varied and it does a genuinely good job of following the chosen arc, but knowing that another one of those cripplingly difficult events could be just around the corner does tarnish what is an otherwise highly enjoyable experience.

It’s not without its faults and the difficulty spikes during Story Mode could certainly do with a rethink, but despite these issues, One Piece: Burning Blood delivers a fine recreation of the hugely popular One Piece series while also providing a genuinely enjoyable, if slightly lightweight brawler. Fans will inevitably get the most from its outstanding levels of fan service and impressive attention to detail, but even the more passive fan (such as myself), will find plenty to like in this gorgeous, fun and accessible fighter.